Save Your SkyMiles, Book Delta Flights Through Virgin Atlantic
Skip to content

If you’ve used SkyMiles to book a Delta flight, you’ve no doubt balked at the number of miles the airline wants. With prices that soar seemingly at random, it can feel like a ripoff. Without an award chart, Delta can charge whatever it wants for a given flight. And when Delta decides it wants a lot, you’re out of luck. But not necessarily…

Here’s your new mantra: Anytime Delta wants a boatload of SkyMiles, see if you can snag the flight for less using Virgin Atlantic points instead. While this relationship has taken a hit in recent months thanks to a major devaluation, there are still some major sweet spots to book Delta flights for fewer miles – especially if you're heading for Europe.

It remains far and away the best way to book Delta One business class.

Delta and Virgin: A Perfect Partnership

Virgin Atlantic is the chic airline that flies across the Atlantic Ocean and the brainchild of Richard Branson. Strangely, its frequent flyer program, Virgin Atlantic Flying Club, typically isn't great for booking actual Virgin Atlantic flights. The rates aren’t great, and the surcharges and fees that get tacked on add up fast.

Virgin isn’t part of a major airline alliance, but a handful of partnerships with airlines open up a ton of great redemption opportunities. Among them, Virgin is a close partner with Delta Airlines, which owns a large stake in Virgin – almost half the airline, in fact. Virgin Atlantic has struggled financially through the pandemic, but help from investors should help get it through largely unscathed. 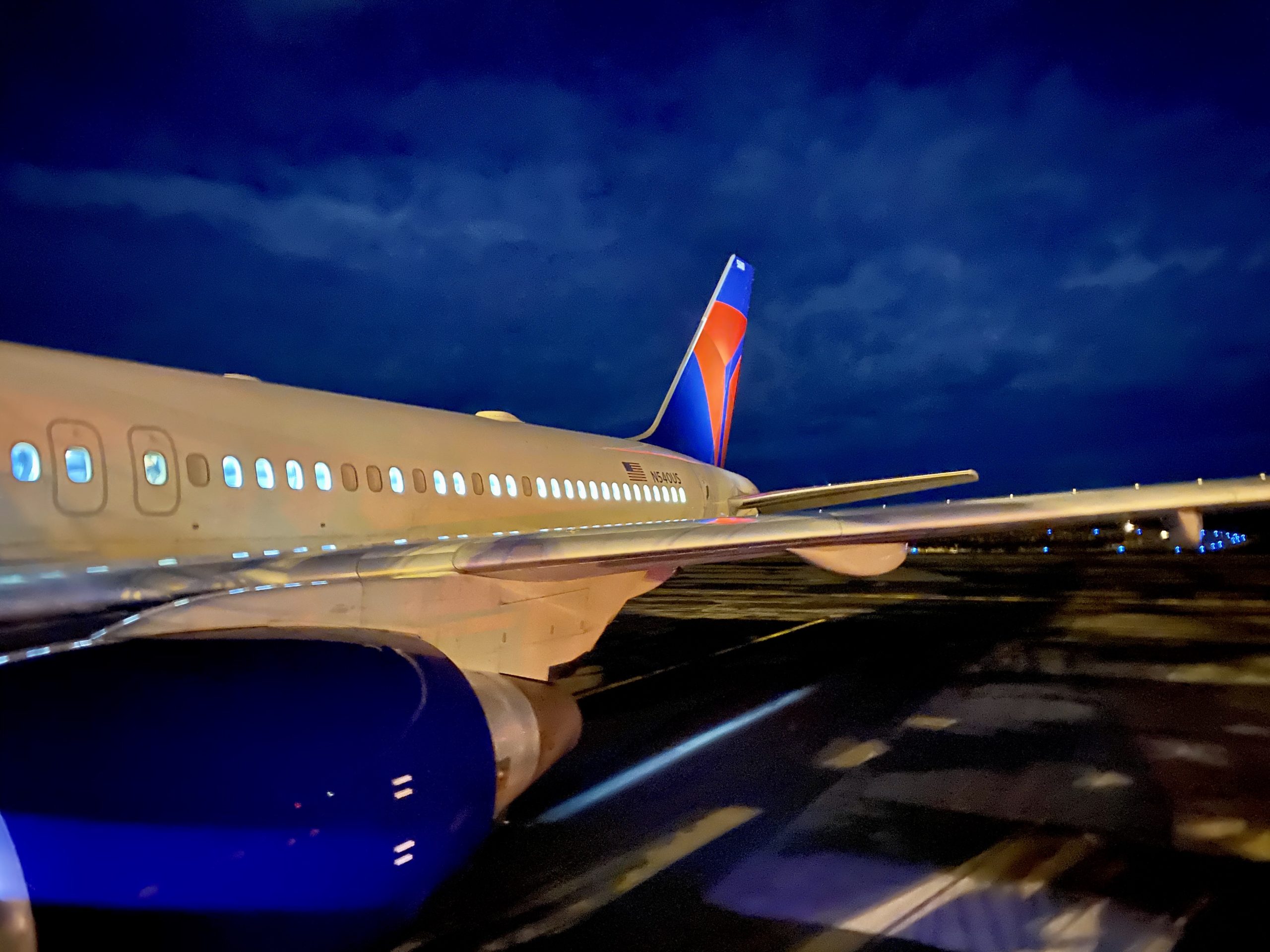 But when it comes to pricing awards, the two airlines couldn’t be more different. Delta award prices are all over the map, fluctuating wildly based on day of the week, cash price, demand and more.

However, Virgin award rates are far more stable. Unfortunately, those rates took a major hit to kick off 2021 as Virgin Atlantic subbed in a distance-based award chart for nearly all Delta flights that doubled (and in some cases tripled) the cost of booking many awards … overnight.

Fortunately, it's not all bad news. Most flights to Europe have escaped unscathed, so there's still plenty of value booking Delta flights to Europe using Virgin Atlantic points. And there are a few other sweet spots worth exploring.

Pricing is one thing, but you also need to find award availability to book. Maybe it’s just their close partnership, but Virgin Atlantic seems to have better access to saver-level Delta award flights than even SkyTeam partners like Air France/KLM or Korean Air. It can be unpredictable, but it can be done.

So what does this all mean for your miles? Let's take a look.

While Delta pricing when using SkyMiles is all over the map because it doesn't have an award chart, that's not the case here. Virgin Atlantic's website clearly spells out exactly what each and every Delta flight will cost you in miles.

Virgin Atlantic has three distinct award charts for booking Delta flights. There's one specifically for booking flights between the U.S. and Virgin's London-Heathrow (LHR) hub, which comes with some punishing fees.

Then there are flights between the U.S. and the rest of Europe, where pricing is as stable as can be. There's one price for economy, and one price for business class – that's it.

And finally, there's everything else. Trying to fly Delta within the U.S., to the Caribbean, or out to Asia or Australia? Those rates are governed by this distance-based award chart. And that means longhaul flights will cost you plenty more miles than they used to. 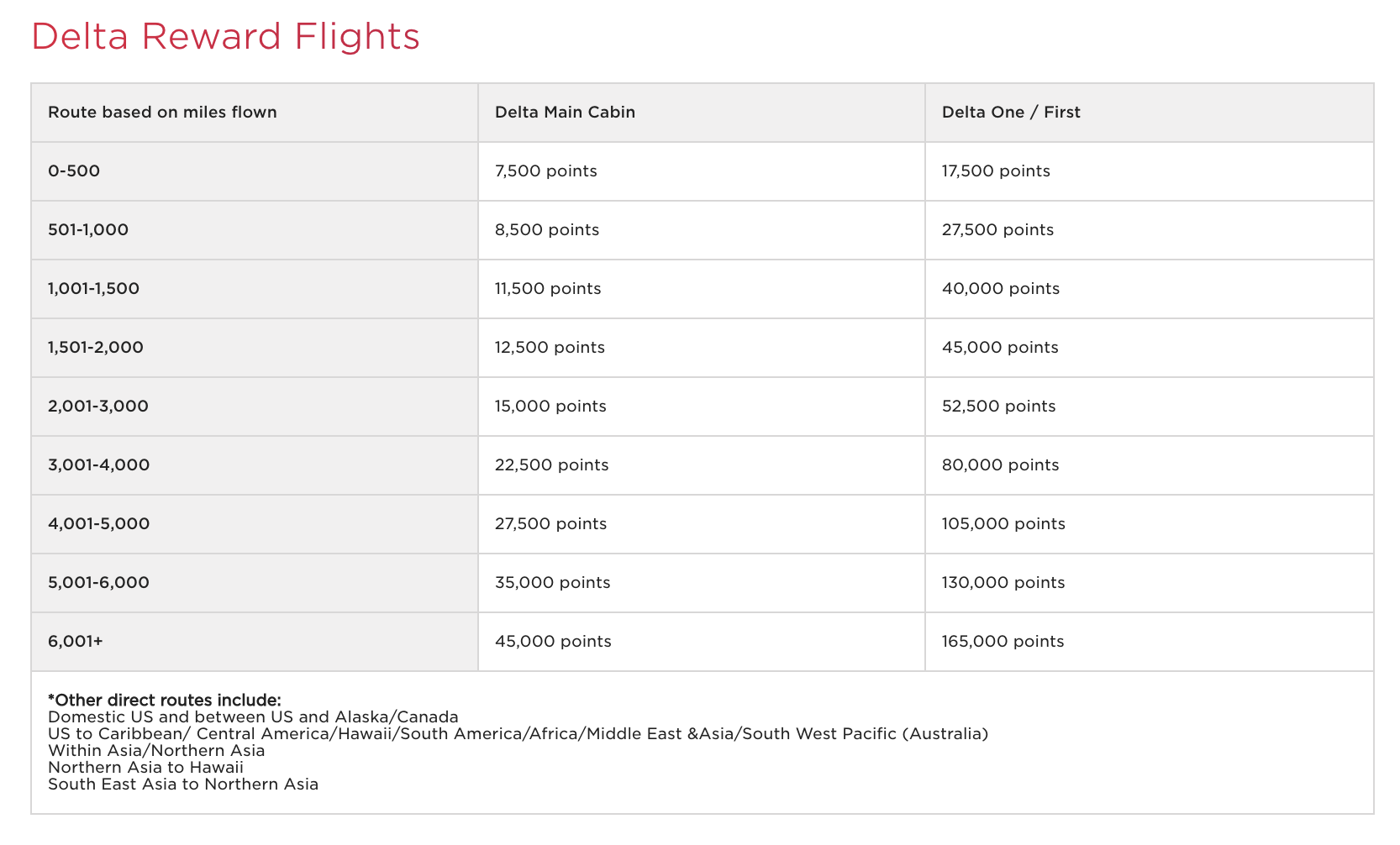 We've broken it down into a handy chart with some of the most popular redemptions, with all pricing listed for one-way flights. Want to book a round-trip? Just double it. As you can see, some of these flights are far more reasonable than others.

Not sure how long your flight is? Plug it into GCmap.com.

Let's see these savings in action.

We could go on and on about all the different ways you could save some serious miles by booking Delta flights through Virgin Atlantic. From economy flights to business class, it can be astounding.

Delta is infamous for charging an arm and a leg for award flights in Delta One business class. Seeing 300,000 SkyMiles or more for a one-way flight to Europe is not out of the norm. For reference, most airlines charge 70,000 to 80,000 miles one-way for business class flights.

However, Delta wants at least 200,000 SkyMiles for a business class seat on the flight from New York City (JFK) to Milan (MXP) later this summer.

But when you can make it work, it's a steal. The exact same flight – same date, same plane, same Delta One seat – for 150,000 fewer miles? That's the definition of a no-brainer move.

Want award alerts for opportunities to book flights like this? Get them delivered straight to your inbox with Thrifty Traveler Premium, along with cheap domestic and international fares.

The savings can get even bigger with an even better sweet spot. Remember that special pricing for flights to the U.K. with hefty fees? There's one exception: Flights between Seattle (SEA) and London-Heathrow (LHR) are exempt. Instead, that route is treated just like any other transatlantic route.

So while Delta wants 320,000 SkyMiles for a flight later this summer …

… you can once again book that same flight using just 50,000 Virgin Atlantic points. Time it right, and you'll even be on Delta's brand new Airbus A330-900neo equipped with Delta One Suites!

You can still find some decent savings on standard domestic flights, too. And given Delta’s habit of charging more for flights between its hubs, it seems to be a sweet spot for Virgin Atlantic. Check out the savings on flights from Atlanta (ATL) to Salt Lake City (SLC) this fall. Delta wants 23,000 miles for a one-way ticket in main cabin economy.

But the exact same flights are bookable for almost half the cost via Virgin Atlantic. The list goes on and on – we could do this for hours.

On the flipside, there are times when you’ll find much better award pricing directly through Delta. The seemingly nonstop Delta SkyMiles flash sales are always worth checking out. And on some short domestic flights (think distances under 1,000 miles), Delta often has some low pricing that Virgin cannot beat.

While Virgin Atlantic has lost some of its luster in the last year due to award rate increases, there was another bright spot.

You see, Virgin Atlantic calculates the price on a per-segment basis. It's always 50,000 miles for that transatlantic flight on Delta, of course. And for the connecting flight within Europe Virgin Atlantic’s award chart for Air France/KLM redemptions spells out some very cheap award rates: Flights under 600 miles will cost 8,000 miles each way during off-peak seasons – and just 9,000 during peak seasons like summer and the holidays.

With a cap of 600 miles, you can reach almost anywhere in Western Europe (and even some of Eastern Europe, too) from Amsterdam (AMS) or Paris-Charles de Gaulle (CDG). Parts of Scandinavia and much of Italy are in reach, too, depending on whether you connect through Amsterdam or Paris.

So in the end, the process looks like this:

That adds up to just 58,000 Virgin Atlantic miles – or 59,000 if you fly during the peak season. Best of all, these mixed-partner itineraries are easy to search and book online: Just search the entire itinerary – for example, New York City (JFK) to Prague (PRG) – and Virgin Atlantic will pull together the mixed-partner booking automatically in the results if they’re available.

Read our full guide to making the most of this mixed-partner award sweet spot!

How to Book Delta Flights through Virgin Atlantic

The savings can be enormous. But that doesn't mean it will always be easy.

The hangup on booking flights through VirginAtlantic.com is that its website can be wonky. For first-timers, it's sometimes difficult to pull up the routes you want. The search engine frequently won’t recognize airports that aren’t in Virgin’s route network.

Just type in your departing airport, then move to your destination. Sometimes it will work, but other times you’ll have to click “See full airport list.”

And then there's the matter of finding award availability at these rates. Just because you can book a Delta One flight to Amsterdam (AMS) for 50,000 miles doesn't mean it will be available every single day you want to fly. You will need to be flexible. And that makes using Virgin Atlantic's Calendar View to get a month-long look at award space critical. 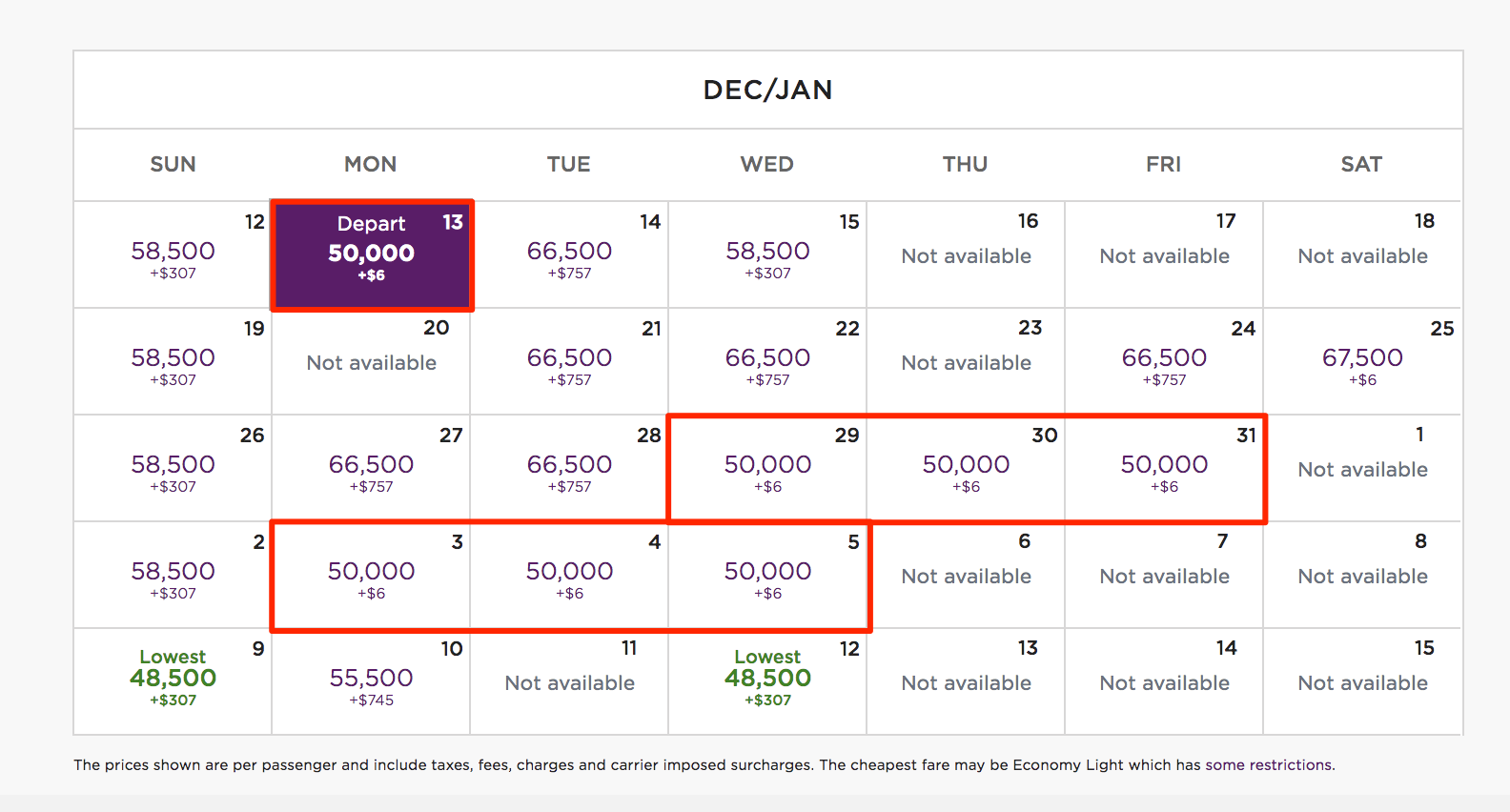 There's no rhyme nor reason for when these Delta flights are bookable. Sometimes you'll have a few dates to pick from, and other times the award space will vanish entirely. Every once in a while, the floodgates open with Delta One award availability for days on end. It rarely matches up with whenever Delta may be charging the lowest rates in SkyMiles.

It may take a few tries but keep at it and eventually, you’ll get the search function to work. And given the savings here, it’s worth the extra effort.

How to Get Virgin Atlantic Points

Despite all their shortcomings, Delta SkyMiles are valuable in part because they’re so easy to earn. With four co-branded credit cards and the ability to transfer American Express points to your SkyMiles account, there are plenty of options.

However, Virgin Atlantic Points are even easier to pile up. Unfortunately, you can't transfer Delta SkyMiles to a Virgin Atlantic account. But Virgin Atlantis is transfer partners with three of the major bank's points currencies: Chase Ultimate Rewards, American Express Membership Rewards, and Citi ThankYou points.

Do it right, and you could pull it off by meeting the minimum spend responsibly, using 50,000 points, and paying just over $100 for the taxes and fees and the Sapphire Preferred card's $95 annual fee. Not bad for a flight that typically costs a few thousand dollars!

Click Here to get more information about the Chase Sapphire Preferred Card.

The Platinum Card® from American Express is another strong option for frequent flyers. The $695 annual fee may seem steep (see rates & fees), but that comes with a ton of premium travel benefits. Oh, and that welcome offer: You can currently earn at least 100,000 points after spending $6,000 in the first six months. But check to see if you qualify for a 150,000-point bonus via CardMatch!

In addition to the bonus points, you’ll also earn 10x points per dollar spent at restaurants and at small businesses on up to $25,000 spent in the first six months (terms apply). Add that all up, and you could easily swing a few roundtrip flights to Europe in business class.

Best of all, American Express regularly offers transfer bonuses of 20% to 30% or more to Virgin Atlantic. That makes it even cheaper to book some of these Delta flights.

We love Delta SkyMiles and we're not shy about it. However, there are many cases where their SkyMiles award pricing doesn't make sense.

When Delta wants a boatload of SkyMiles, you may be able to use Virgin Atlantic miles as your bridge to greatly reduce the cost of your Delta flights.