From Scranton to Santa Ana, dozens and dozens of American airports big and small are included in this latest Delta SkyMiles flash sale to Madrid (MAD) and Barcelona (BCN), with rates as low as 32,000 SkyMiles roundtrip – less than half the normal cost! Best of all, you can hitch a ride to Spain for cheap this fall or all the way through February 2022.

Thrifty Traveler Premium members got this alert first, but there's still some solid availability out there for you to book your trip for as low as 32,000 SkyMiles roundtrip – and generally under 40,000 SkyMiles nationwide.

Get more award alerts like this one, plus cheap domestic and international fares, with Thrifty Traveler Premium!

Travel to Europe may seem uncertain these days as more countries tighten restrictions on American travelers. But Spain remains open to Americans today – at least most of them. Along with France and several other countries, Spain now requires either proof of vaccination or recovery from COVID-19 for entry.

Read more about European travel restrictions in our country-by-country guide!

But part of the beauty of booking with SkyMiles is that all of these fares are fully refundable. That means you can book a trip at these dirt-cheap rates now, then cancel and get all your SkyMiles (and taxes and fees) back for free.

Not to mention, all these fares are main cabin economy fares – not Delta basic economy. So no need to worry about picking your seat or paying to check a bag; it's all free with these tickets. And thanks to an ongoing promotion from Delta, you’ll even earn a boatload of Medallion Qualifying Miles (MQMs) towards Delta elite status with these award fares booked using SkyMiles. For example, a flight from Chicago-O'Hare (ORD) to Barcelona (BCN) later this year would cost you just 32,000 SkyMiles – and you’d earn almost 14,000 MQMs toward Delta status too!

At 32,000 SkyMiles roundtrip, these flights are available for less than half the 70,000 SkyMiles (or more!) Delta and other airlines typically charge for transatlantic flights. While you'll only find nonstop flights to Madrid and Barcelona out of New York City (JFK), you can fly from almost any U.S. city with Delta service nationwide at these rates.

When we say nationwide, we mean nationwide. Big cities like Los Angeles (LAX), New York City, Boston (BOS), and Chicago-O'Hare (ORD) can get flights to Spain for this cheap. But there are equally cheap rates from small towns like Appleton, Wisconsin (ATW), Destin, Florida (VPS), Hibbing, Minnesota (HIB), Minot, North Dakota (MOT), and many, many more.

Spain is a magical country with amazing food, cheap wine, and amazing sights no matter where you go. Check out our guide to must-dos in Madrid and seven can't-miss-spots in Barcelona.

Thrifty Tip #1: Make sure to use Delta’s “Price Calendar” feature when searching for award rates to find the best deals.

Thrifty Tip #2: Want to boost your SkyMiles balance for the next deal and get lounge access worldwide? Earn up to 150,000 points with American Express (transferable to Delta) after spending $5,000 in six months with the Platinum Card® from American Express. 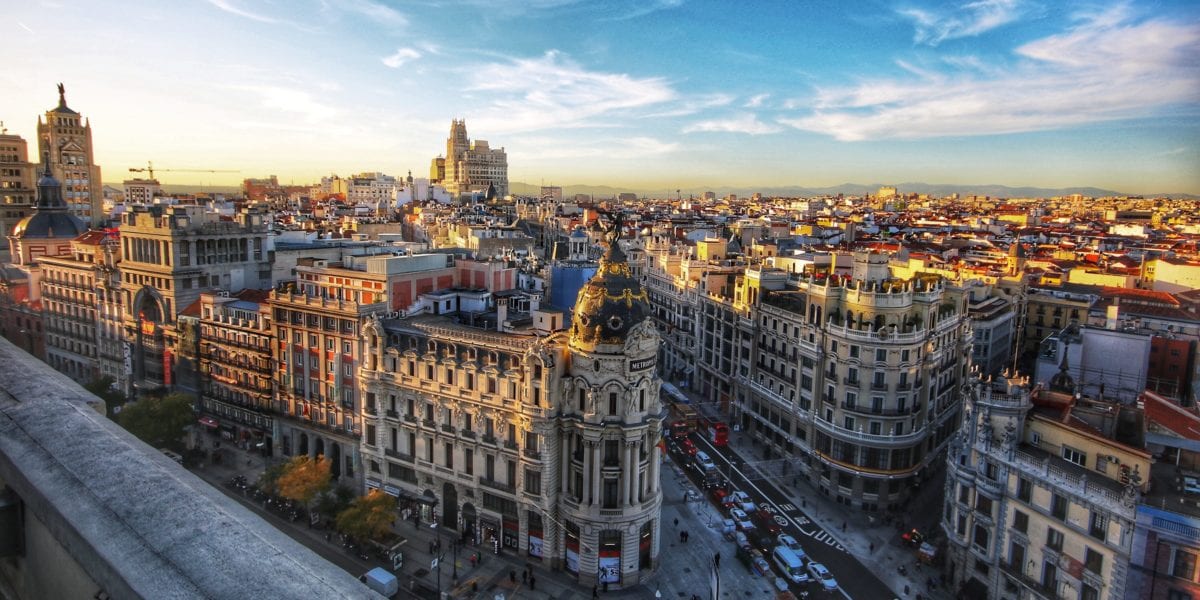 How To Book the Sale

Here's a quick walkthrough on how to book.

First, head to Delta's website and do a normal search from your home airport with Delta service. Be sure to click “Shop with Miles.”

Second, choose “Price Calendar” to maximize the dates viewable. The taxes and fees on these fares are about $55 – but even those will be refunded to your card if you need to cancel. Both Barcelona (BCN) and Madrid (MAD) should have similar pricing on this deal.

How to Earn Delta SkyMiles

Unless you’ve already got SkyMiles burning a hole in your pocket, it’s probably too late to earn the miles you need to book this sale. But it’s never too late to earn more SkyMiles for the next great flash sale around the corner.

Instead, look to the non-Delta Amex cards that earn Membership Rewards Points.You can easily transfer Amex points from the Platinum Card® from American Express or the American Express® Gold Card straight to your Delta SkyMiles account.

Read up on more ways to earn Delta SkyMiles!

From nearly every airport with Delta service, you can book your Spanish getaway for 32,000 SkyMiles or just a few thousand more.

These SkyMiles flash sales are one of the absolute best ways to use your SkyMiles – you won't see discounts like this elsewhere. It's yet another reason why SkyMiles can be so valuable, especially when used wisely.