Fast-Track Your Medallion Status: Earn Delta MQMs & MQDs For Less
Skip to content
This post contains references to products from one or more of our advertisers. We may receive compensation when you click on links to those products. The content on this page is accurate as of the posting date; however, some of the offers mentioned may have expired. For more information check out our Advertising Disclosure.
Terms apply to American Express benefits and offers. Enrollment may be required for select American Express benefits and offers. Visit americanexpress.com to learn more.

We tell readers that Delta status – or status with any airline – isn’t for everyone. Even the lowest levels of Delta status require a fair amount of travel, and the rewards aren’t that great.

There are two critical pieces to get status with Delta: flying and spending. Average travelers are unlikely to even scratch the surface of hitting Silver Medallion status, the airline’s lowest tier. If you travel a fair amount for work – especially international long-haul – that could do the trick.

But whether you’re trying to hit that first rung of status or are mapping out a gameplan to get all the way up to Platinum or Diamond, flying with some of Delta’s partner airlines in the SkyTeam alliance is key. It’s how you can fast-track your way to earning Delta elite status.

We’ll walk through just how to earn Delta status … and how Delta partner airlines can accelerate you.

Medallion Qualification Miles – or MQMs as they are better known – are one of the two key ingredients to earning elite status with Delta Air Lines. And they are different than SkyMiles.

You earn and use SkyMiles by flying. But Delta MQM’s have zero value … except for tracking your progress towards Delta’s Medallion elite status. MQMs are based on the actual distance flown. And you will generally earn 1 MQM for every mile you fly with Delta, though premium cabin flyers can earn 25% or 50% more, depending on the fare. With the Delta SkyMiles Reserve Card, you earn 15,000 Medallion Qualifying Miles (MQMs) by spending $30,000 throughout the year. That’s almost enough to automatically get Delta Silver Medallion Status without taking a single flight. This will be replicated for spending $60,000, $90,000 and $120,000 in a calendar year as well. So for big spenders, it is possible to earn 60,000 MQMs each year without taking a single Delta flight. 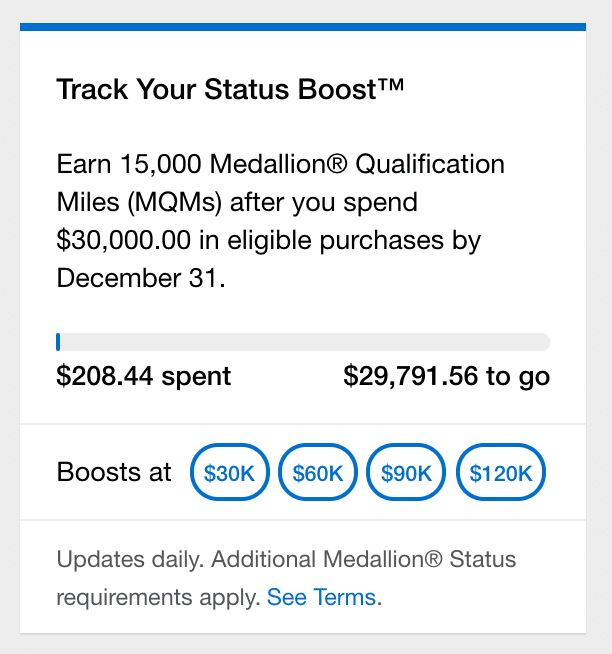 It’s a big reason we’ve included both of these cards on the list of the best credit cards for Delta flyers.

Loyalty is expensive, and in our opinion, trying to attain status on one airline makes little sense for the average traveler. But if you are a frequent business traveler whose company is footing most of the bills for your travel, status is really nice to have and can make your experience on the road so much better.

Here’s a breakdown of how many MQMs or MQSs and MQDs are required to achieve each level of Delta Medallion status.

And while neither of them will allow you to earn MQDs by holding the card, you can earn an MQD waiver for Silver, Gold and Platinum status by spending $25,000 on any and all purchases with the card in a calendar year. The waiver allows you to satisfy the MQD portion of the status earning requirement – no matter how many actual MQDs you have earned.

However, in order to get an MQD waiver from one of the co-branded credit cards for top tier Diamond Medallion status, you’ll need to spend $250,000 on the card in a calendar year.

So as you can see, I am only 881 MQMs away from earning Silver status for 2021. However, I am $2,259 MQDs away and I don’t have any qualifying credit card spend towards earning the MQD waiver. Unless I meet the threshold for both, I won’t earn status.

When you book a flight with Delta, every $1 you spend gets you 1 MQD towards earning Medallion elite status. But that’s not how it works with Delta’s partner airlines.

You can fly on Air France or KLM, Korean Air, AeroMexico, or China Eastern and keep earning Delta SkyMiles – and build on status. One of the benefits of airline alliances like SkyTeam is that these partnerships allow flyers to choose where they want to earn miles and status.

And when you book a flight through one of Delta’s partner airlines, the Delta MQDs you can earn are not based on the dollar amount you spent on the flight. Instead, it’s calculated by distance flown multiplied by something called a fare class multiplier – a higher fare class means a larger multiplier.

It’s a critical difference. And while you’ll still have to spend some money, these partnerships mean you can spend far less and still build Delta status by earning a ton more MQDs. Take for example AeroMexico’s partner award chart pictured below.

Back in 2018, I booked a round trip business class ticket on Aeromexico from New York (JFK) to Santiago, Chile (SCL) with a stop in Mexico City (MEX) for $992 dollars – a great deal sent to our Thrifty Traveler Premium members. I paid for the fare with only 66,133 Chase Ultimate Rewards Points, but that’s another story.

If this flight was booked on a Delta plane, I would have only earned 992 Medallion Qualifying Dollars (MQDs) towards Delta status. But because I was flying AeroMexico, MQMs were earned in an entirely different way. As you can see above, AeroMexico fares earn MQDs at a 40% multiplier for all business class fares.

And this multiplier is based on the distance you actually fly, and not the price you paid for your ticket. And because of that, I earned 4,940 MQDs instead of the 992 I would have earned on a Delta flight. That’s enough to meet the Silver medallion status MQD requirement. This was calculated by taking 40% of the total distance flown which was 12,350 miles.

MQD earning rates will be different for every partner, so make sure to check Delta’s partner airlines page which will have information about each partner.

Earning MQMs on Delta’s partner airlines generally works the same way it does on Delta-operated flights. Using the AeroMexico example above, I earned 200% of the distance flown in MQMs (see the table below). That means I earned 24,700 MQMs towards status, and this trip alone was nearly enough to qualify me for Silver elite status. Not bad for a $992 fare … that I didn’t even pay for. Instead, I booked with Chase Ultimate Rewards points.