Emirates First Class is firmly engrained on many traveler's bucket lists. And that's not a mistake.

From bottomless caviar and Dom Perignon to the onboard bar and taking a shower at 40,000 feet, there's really nothing else like it – especially if you find yourself on a flight with the new, game-changer first class suites. It's the definition of “extra” … in the best possible way.

But actually booking these first class suites can be extra, too – as in, extra challenging and extra expensive. Booking Emirates First Class the right way is the key to saving some serious points and cash, and getting the most out of this incredible flight.

If you ask me, one particular route stands out…

Look to Europe, Not Dubai

The best things in aviation don't come free. But flying Emirates First Class on the right routes can save you a ton of points – and cash, too.

Your mind probably immediately goes to flying from the U.S. to Emirates' hub in Dubai (DXB) or back. What better way to enjoy it than a 13-plus hour flight to the Middle East, right?

But it's not cheap: First class flights from the East Coast to Dubai clock in at 136,250 miles each way. Start from a West Coast city like Los Angeles (LAX), and it climbs to 155,000 miles. Emirates Skywards are easy to earn since you can transfer them from all the major banks like Chase, American Express, Capital One, and Citi … but that's still a lot of points.

Worse yet, after a series of increases to fuel surcharges earlier this year, it now costs another $836 in taxes and fees – or even more if you connect onward somewhere beyond Dubai. Flying home to the U.S. from Dubai, the cash cost for first class clocks in at $882 USD. Ouch.

That's where Emirates' funky fifth-freedom routes between the U.S. and Europe shine. You can also fly Emirates nonstop from New York City (JFK) to Milan (MXP) as well as Newark (EWR) to Athens (ATH).

If there's one route to pick here for the quintessential Emirates First Class experience, it's the flight to Milan. That's because Emirates flies its signature Airbus A380 on this route to Italy, meaning you can head to the back of the upper deck for a drink at the onboard bar and rinse off in the shower before landing. 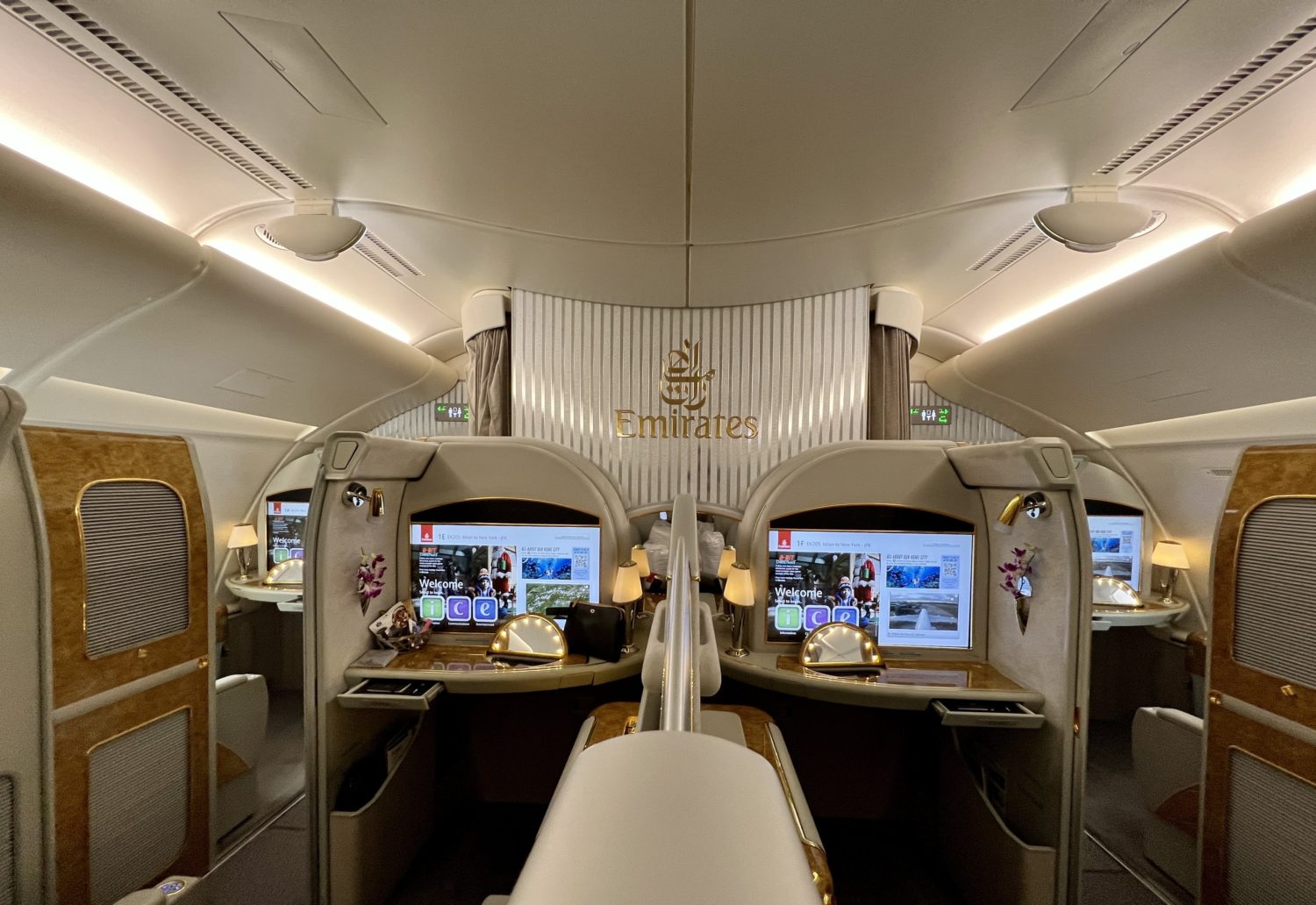 The Boeing 777s that Emirates flies to Athens have similar suites, but the shower and bar are nowhere to be found.

Unless you're planning a roundtrip in First Class, you've got to choose which way you want to splurge. Take it from me: You may want to resist the urge to fly first class to Europe and save it for the trip home from Italy instead…

When flying something like Emirates First Class, longer is almost always better. Jennifer Aniston said it best: “It's so nice up here.”

Thanks to the earth's rotation and the jet streams it creates, flying west always takes longer than flying east. The difference is substantial here: Emirates schedules its flights as follows:

But airlines always block off more time than they need so, in reality, it's even shorter. My Emirates flight to Milan last week lasted just 6 1/2 hours total.

That's just not long enough. And because the flight to Europe departs so late (around 11 p.m. EST, in fact), all you may want to do is sleep on the flight to Italy. The flight is structured all around getting passengers quickly fed and put to bed.

That makes enjoying everything that makes Emirates First Class so excellent tough. So opt for the flight from Milan (MXP) back to the states and give yourself more time to soak it in. These flights are scheduled to depart Italy in the afternoon, so you'll be flying through the rest of the daytime and arriving when it's nearly time to go to bed in the U.S. It takes about 8 1/2 hours total. 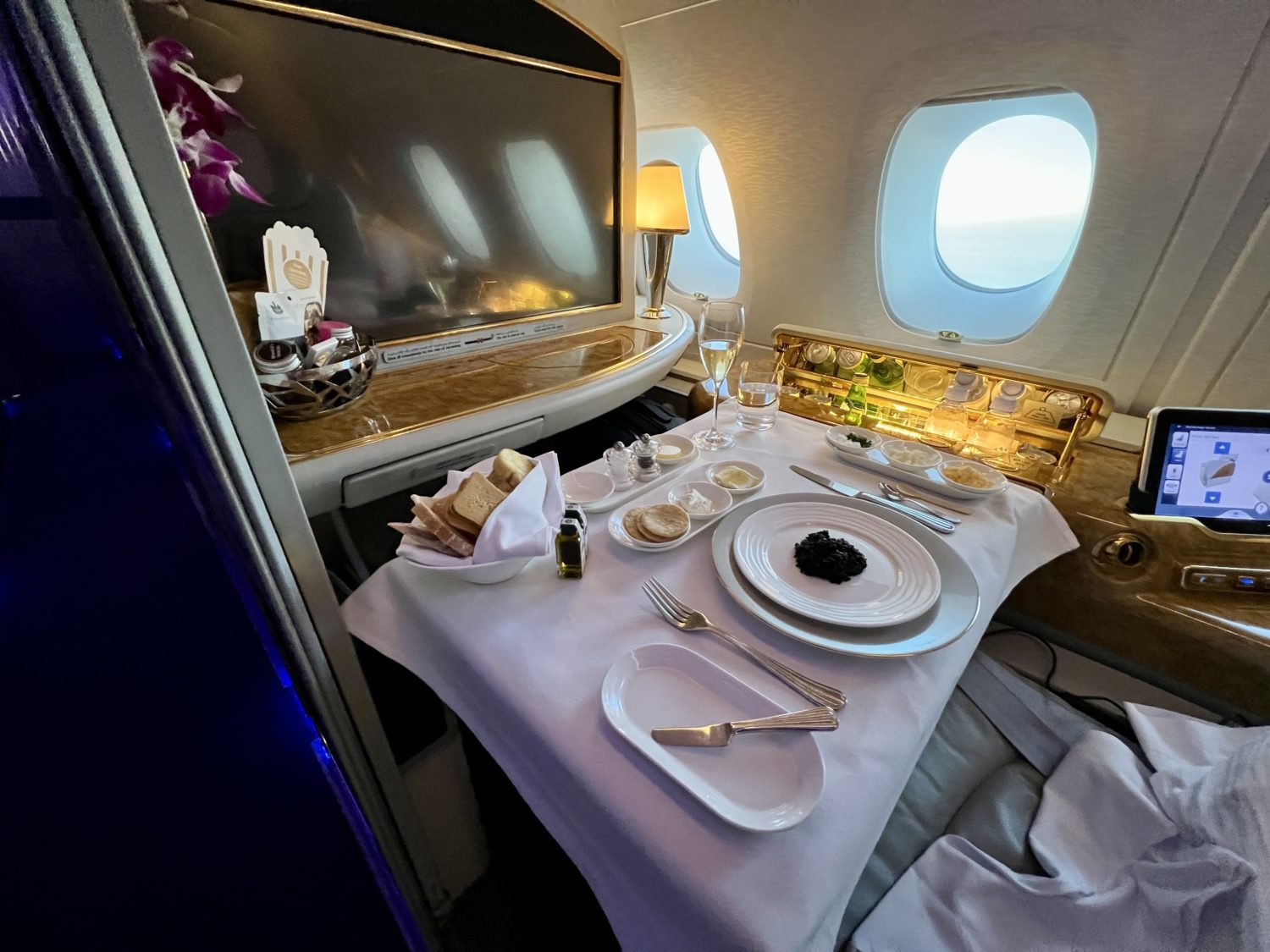 Another plus? In my experience, it's typically easier to find the award availability you need to actually snag a first class seat on the westbound departure from Milan than it is flying over to Italy. It's still no sure thing, but it's certainly a safer bet than many other routes.

Thrifty Tip: You can even book a business class seat, then ask at the check-in desk to upgrade to first class for 39,000 Skywards miles or less.

With your first class ticket home to the U.S. in hand, you could finish off your roundtrip across the pond with one of our other favorite ways to book flights to Europe using points. Maybe it's scoring a Delta One business class seat for 50,000 points or Iberia business class for just 34,000 miles?

Heck, you could even fly Emirates business class on the flight over to Milan, pairing it with your first class seat home for as low as 130,000 Emirates miles and under $250 total for the roundtrip.

Read more: How to Book Emirates Flights to Europe

There's a reason for all the hype surrounding Emirates First Class. No doubt about it: It's one of the best ways to fly, period.

Sure, the gold-and-faux-wood look up in First Class is a tad gawdy – and Emirates is revamping its cabins for a fresher, more modern look. But the suites with closing doors in Emirates First Class are comfortable, spacious, and private. The service is often impeccable. The food and drink options are nearly second-to-none. And the amenities and extras you get are “pinch me, is this real?” cool. 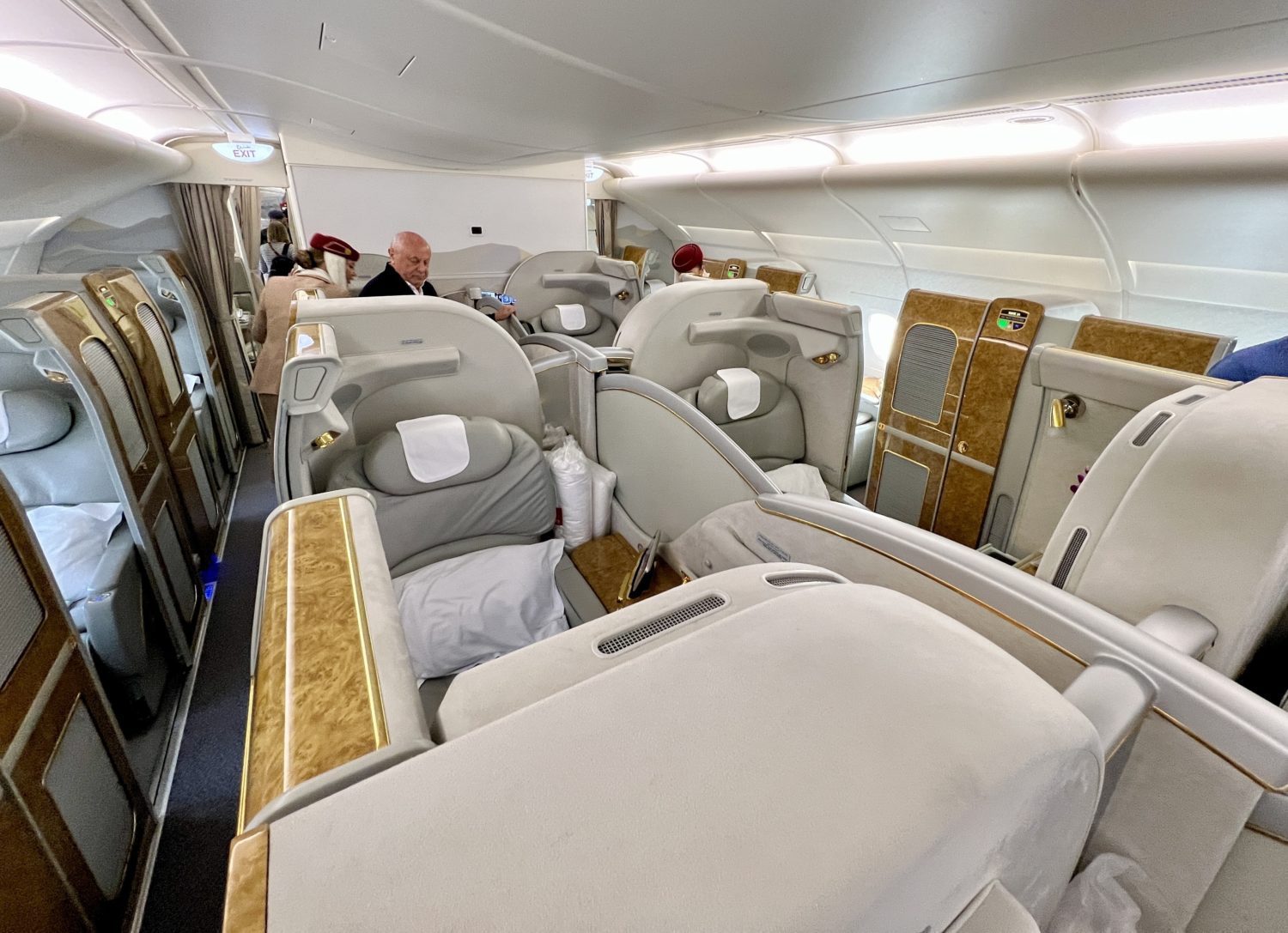 We'll have a full review in the coming weeks, but just to give you a flavor…

Emirates exclusively serves Dom Perignon up in First Class, often rotating in extra-special (and even more expensive) vintages, like the 2003 Plenitude 2 they've been pouring for a few months. One extra perk of flying Milan to New York instead of the reverse is that they pop bottles of the good stuff as you're boarding in Italy – something they may skip on the ground in New York to avoid paying extra taxes. 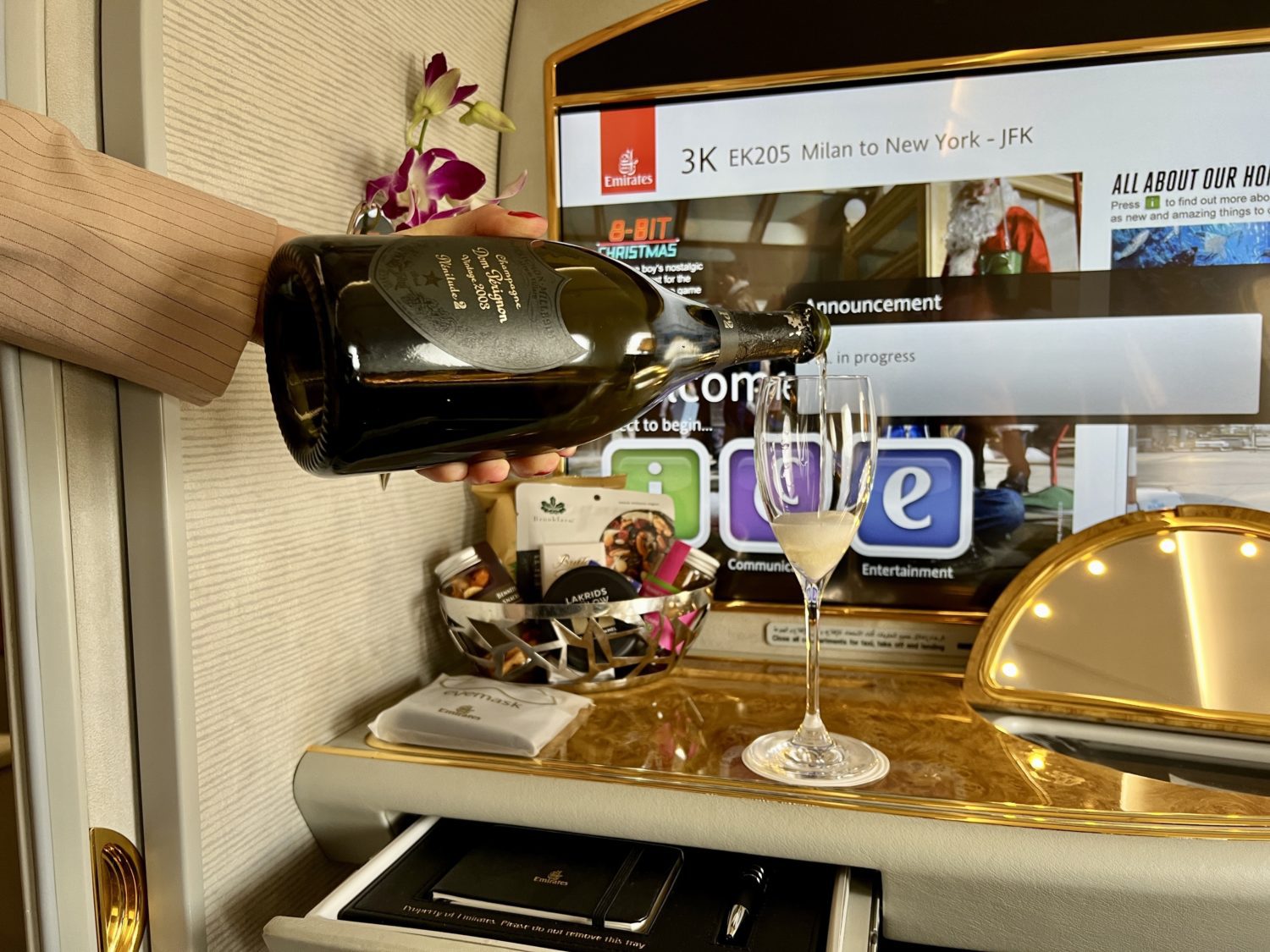 Nothing says first class like caviar, and no airline does it better than Emirates … especially now that they're offering unlimited portions to first class passengers. One massive mound of caviar with all the fixings is enough for me, thanks. 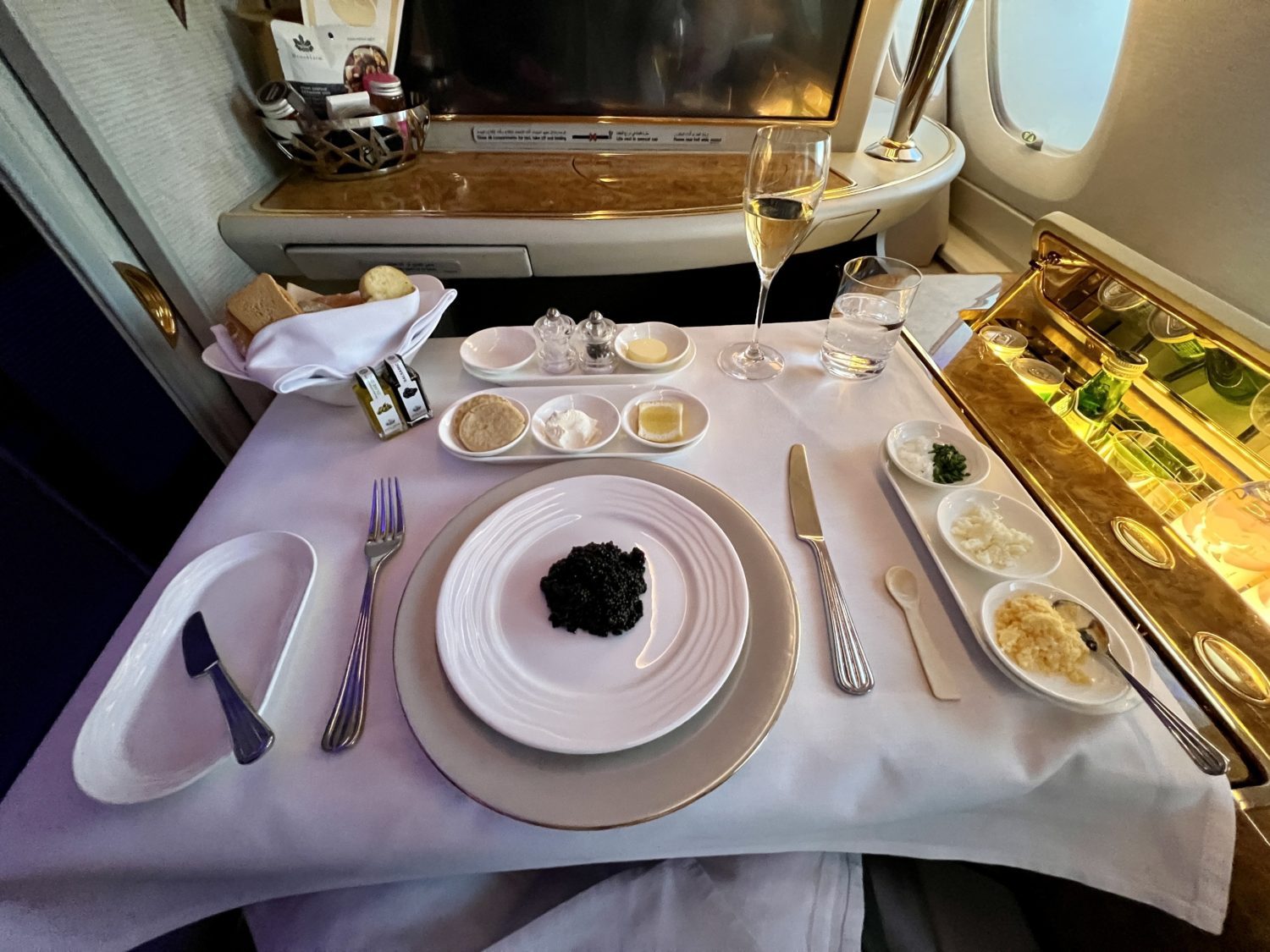 I've never seen a mountain of amenities quite like what was waiting for me in my suite. That includes a great mattress pad and luxurious duvet, two pillows, a Bvlgari-branded amenity kit with the most impressive contents I've ever seen, an excellent pair of Bowers & Wilkins headphones, and a set of unbelievably comfortable pajamas. Did I forget anything? Probably.

Whether you're up front or flying business class, few things are cooler than heading back to a bar in the sky for a night cap. But Emirates takes it to the next level for first class: A flight attendant asked to escort me back to the bar and even sent back a bottle of Dom so I could have another glass. It's over-the-top but that's the Emirates First Class way… 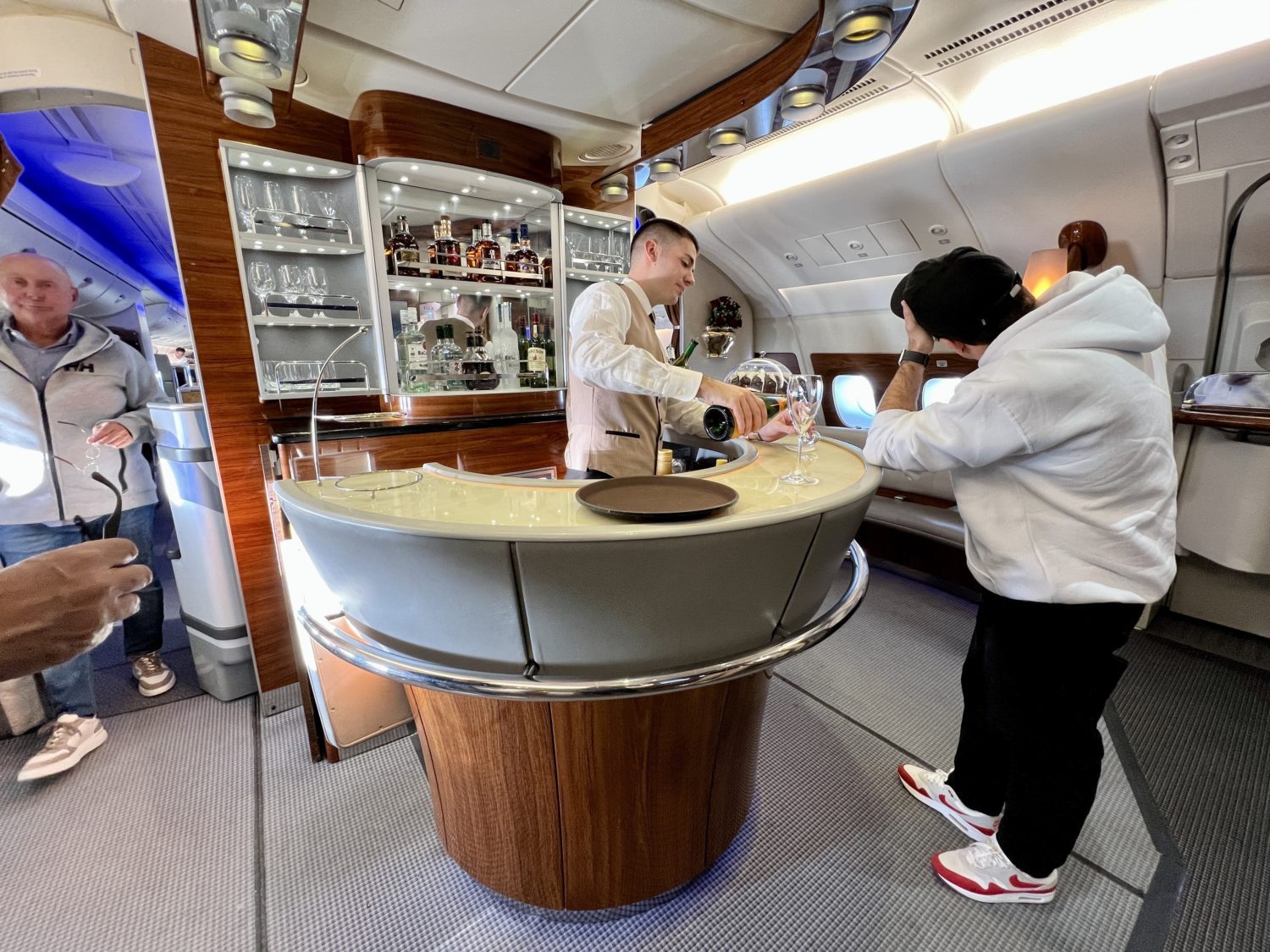 Just one thing puts the bar to shame: Taking a shower at 40,000 feet. The first class cabin is equipped with not one but two showers, which you can reserve after boarding. Like clockwork, a flight attendant collected me and brought me up front for one of the most ridiculous experiences you can find in the air. 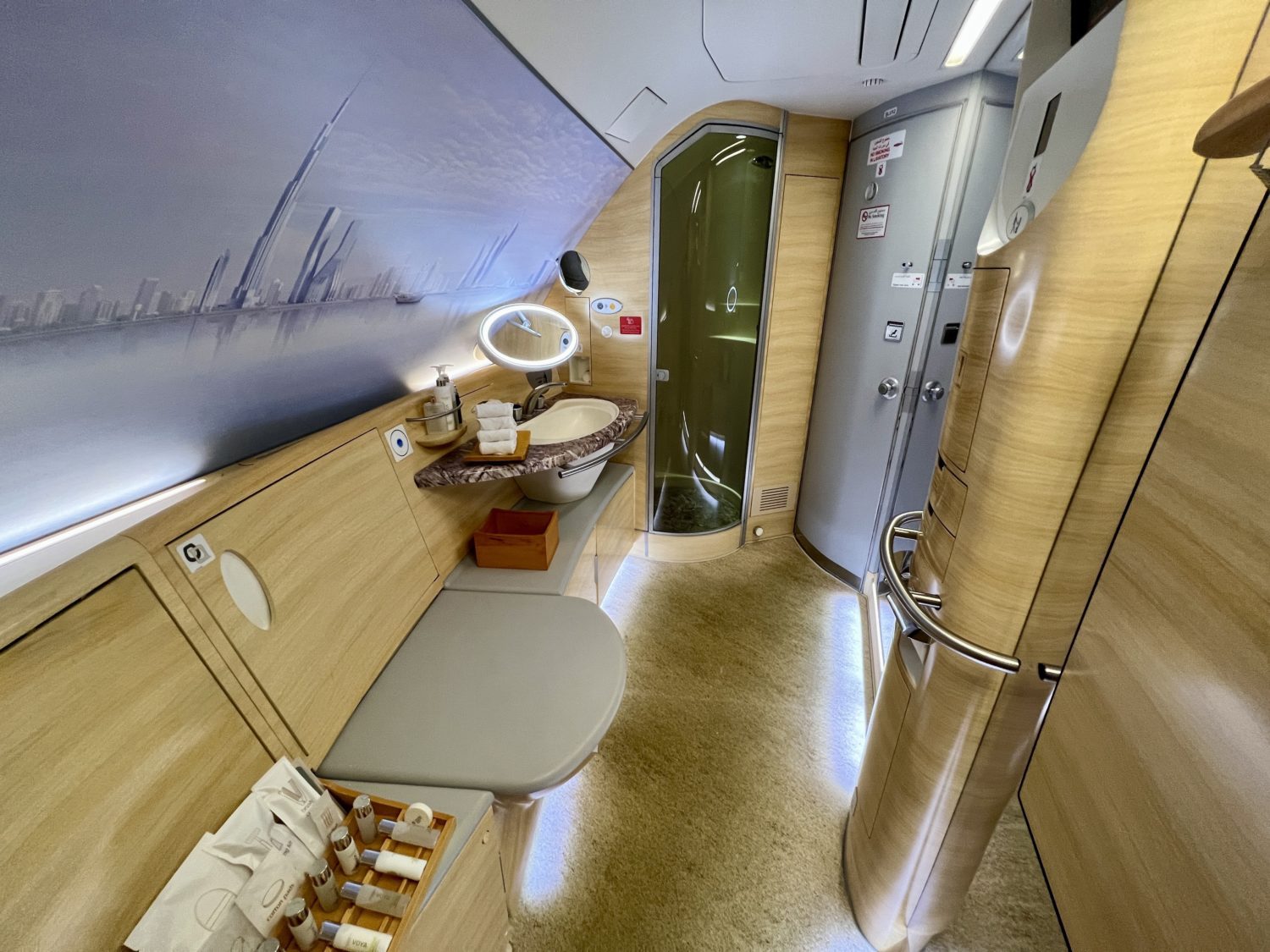 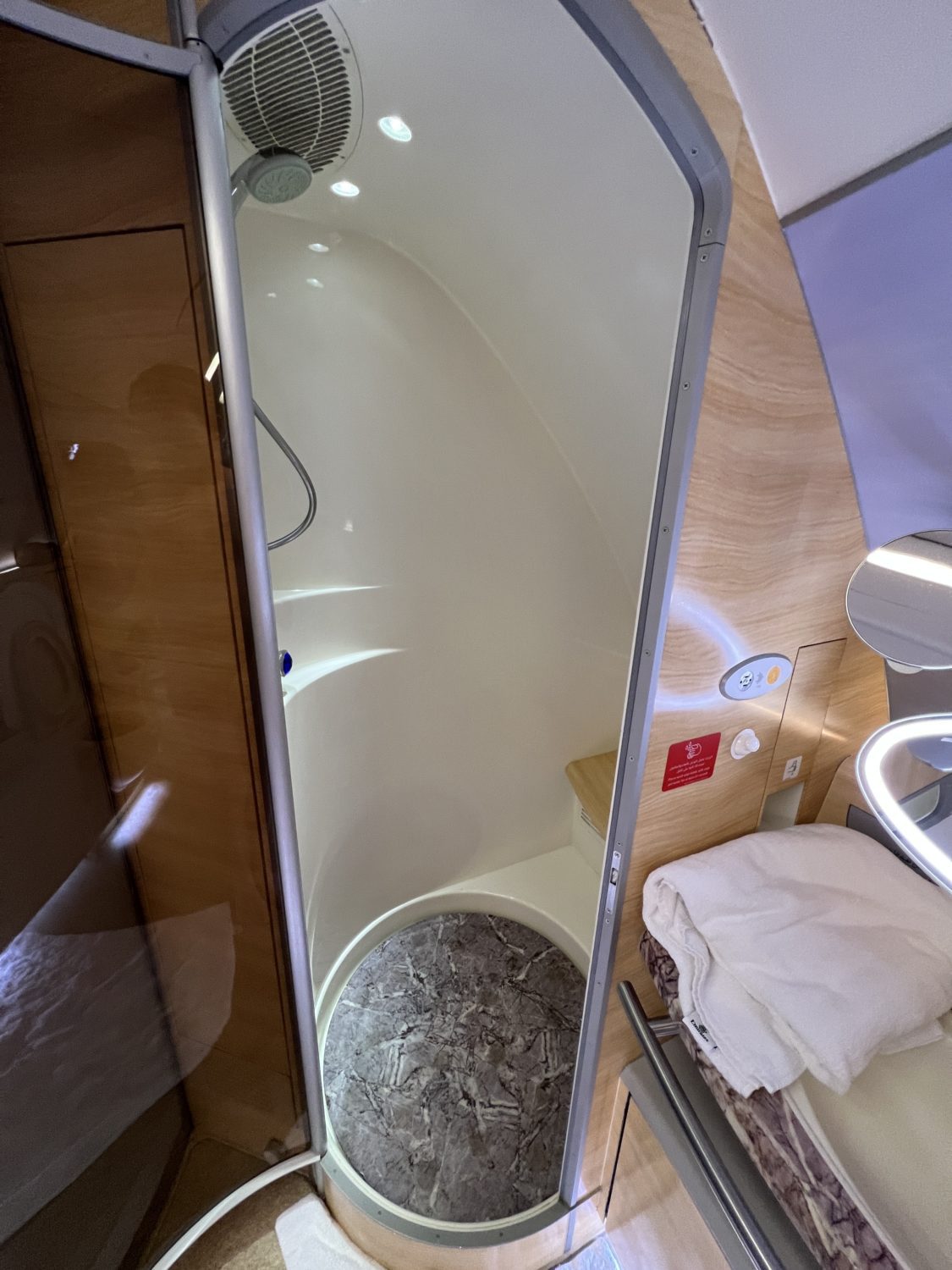 There's no doubt in my mind: Emirates First Class lives up to the hype. But if you spend too many miles or too much cash for a short, overnight flight on a plane with no showers or bar onboard, you might not feel that way.

If you don't want to fork over nearly double the miles and almost $1,000 in fees, booking Emirates First Class on the flight from Milan back to New York City might just be the easiest (and best) way to make it happen.