The end of the year is fast approaching, and that means it's silly season for travelers making questionable life choices in the pursuit of airline status. And this year, I'm one of them.

We've said it until we've been blue in the face: Airline status isn't right for everyone. Unless you're an ultra-frequent traveler flying on your employer's dime, most travelers are much better off as free agents. And it's not necessarily worth the expensive, end-of-year mileage runs for the sake of leveling up or keeping your status.

And yet, after thinking things through, I gave into the madness and did the same myself. One quick trip later, I've locked in Silver status – yes, the lowest tier of Delta Medallion status – until early 2024.

Here's a look at my thought process and why I decided not to follow my own advice … and how that might help you decide on your plans for 2023.

Flyers lust after elite status for complimentary upgrades. Who doesn't want a seat up in first class for the price of flying economy?

But the reality is that these upgrades are often few and far between, especially after several years of extensions and promos that made status easier to earn. Even travelers with top-tier status miss the boat, let alone a lowly Delta Silver Medallion flyer like me. Case in point: In my 14 flights since July, I was upgraded to Delta Comfort Plus just twice … and never to first class.

But I didn't want another year with Delta status for the upgrades. I wanted it for what I consider the single-best perk for entry-level elites: Free preferred seat selection.

That means another year of seats toward the front of the economy cabin and even in exit rows, scoring 35-plus inches of legroom compared to the 31 or 32 inches you get in other economy seats. Though you won't get free booze or a better snack basket, I'd still argue these seats are even better than sitting up in Comfort Plus. 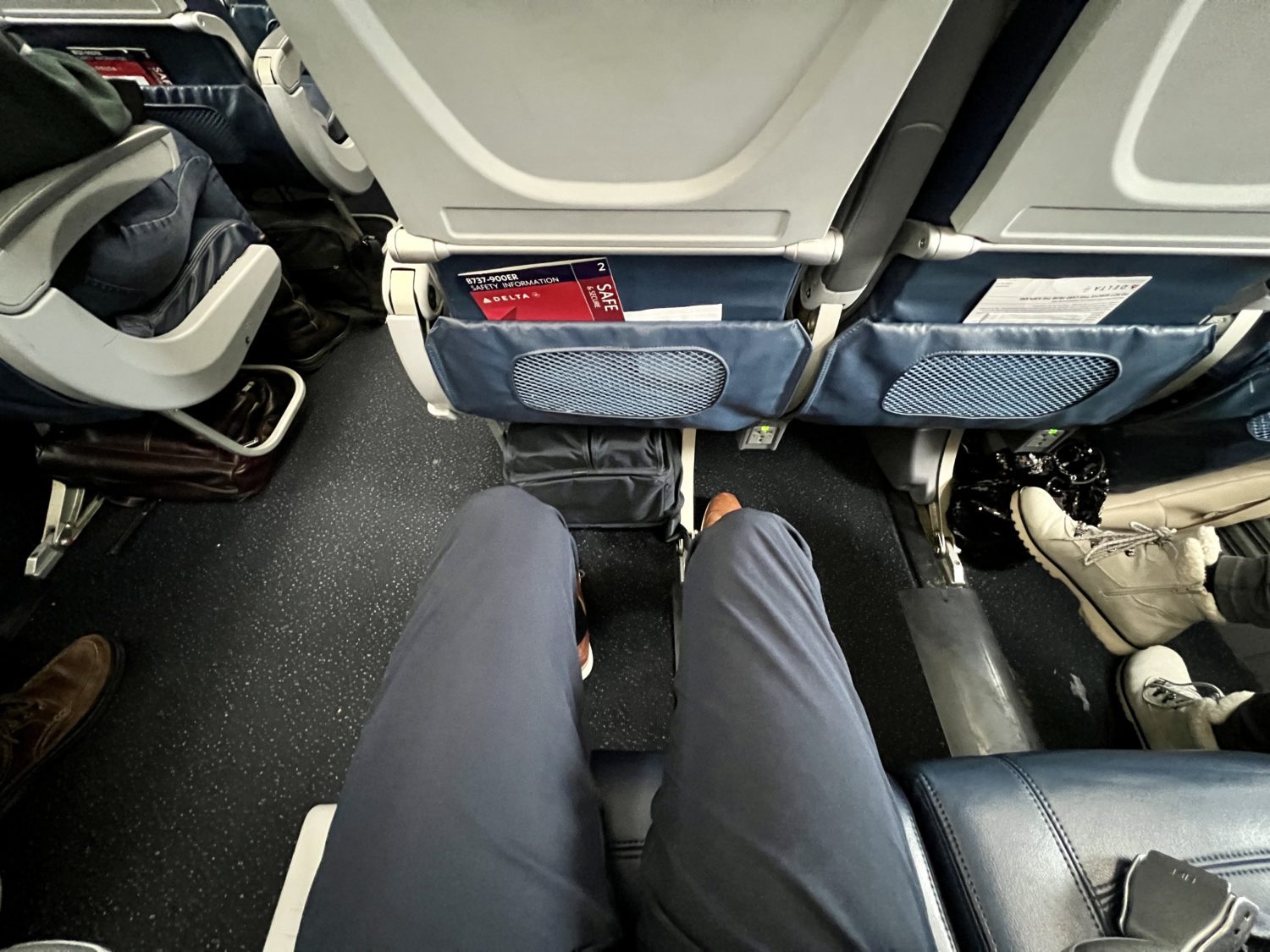 From lowly Silver Medallions to the top Diamond members, complimentary preferred seat selection is part of the program. Without that status, picking these seats would cost anywhere from about $20 to as much as $80 or more each way. That adds up quickly over a year, especially since I can pick these seats for both myself as well as my wife when we're booked together.

On some planes like Delta's newest Airbus A220s, a few exit row seats have a truly unbelievable amount of legroom thanks to the row in front missing a seat. This beats Delta Comfort Plus any day of the week. 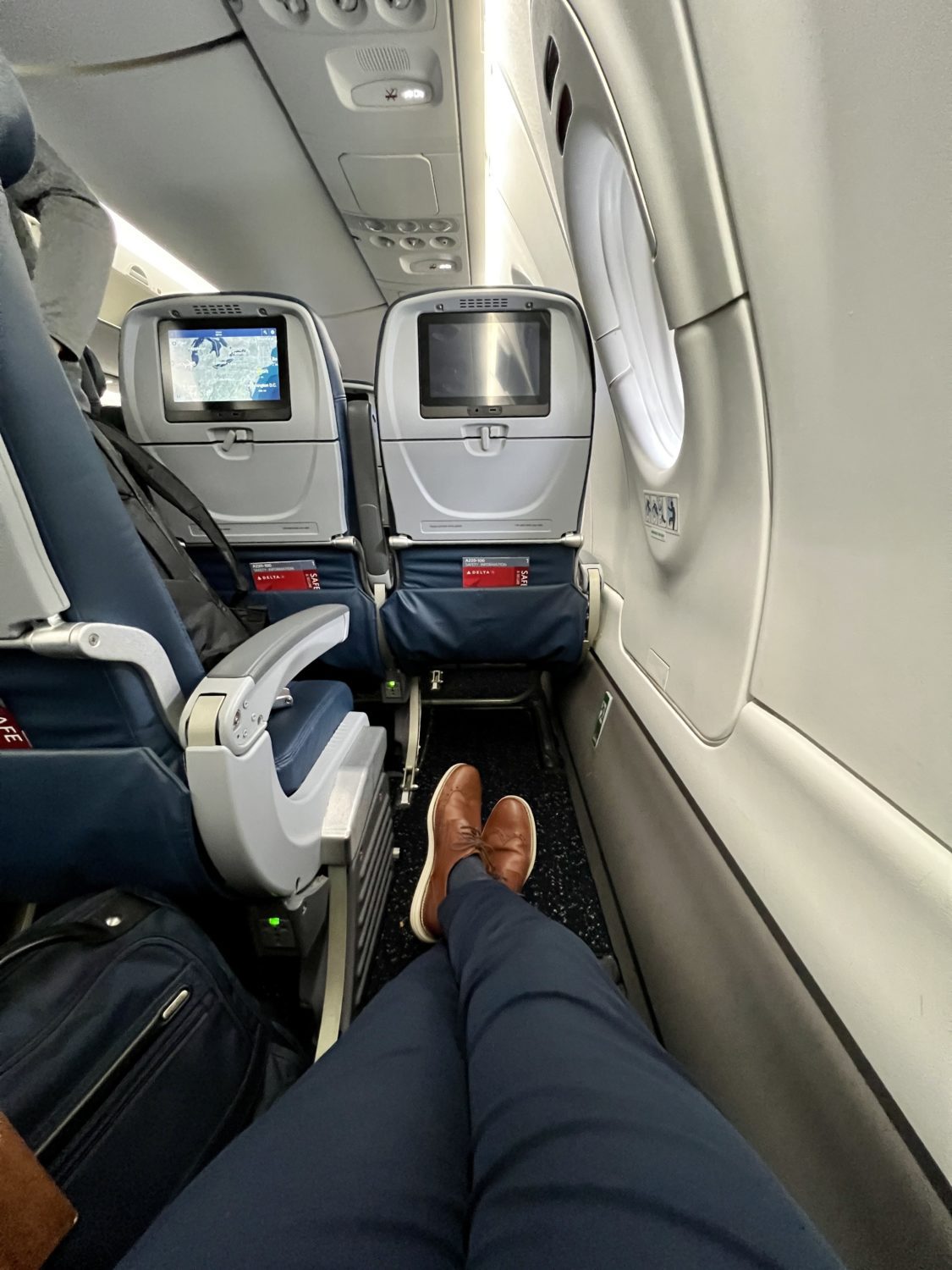 There are other perks to keeping my Silver status for another year. While I almost always pack in just a carry-on, getting a free checked bag even when flying partner carriers like Air France or KLM is nice. Earning 7x SkyMiles (up from 5x) for every dollar I spend on Delta flights doesn't hurt, either.

Of course, as you climb the rungs of status the benefits get much, much better. Earning upgrade certificates (which can now be applied online!) with Delta Platinum or Diamond Status, for example, can make it fairly easy to justify the cost of earning those higher levels of status.

For me, that was never part of the equation. I wouldn't get close, so it was all about securing another year of exit row seats.

I Was So, Stupidly Close…

Here's a look where I stood with Delta as of the start of December. This is almost comical. 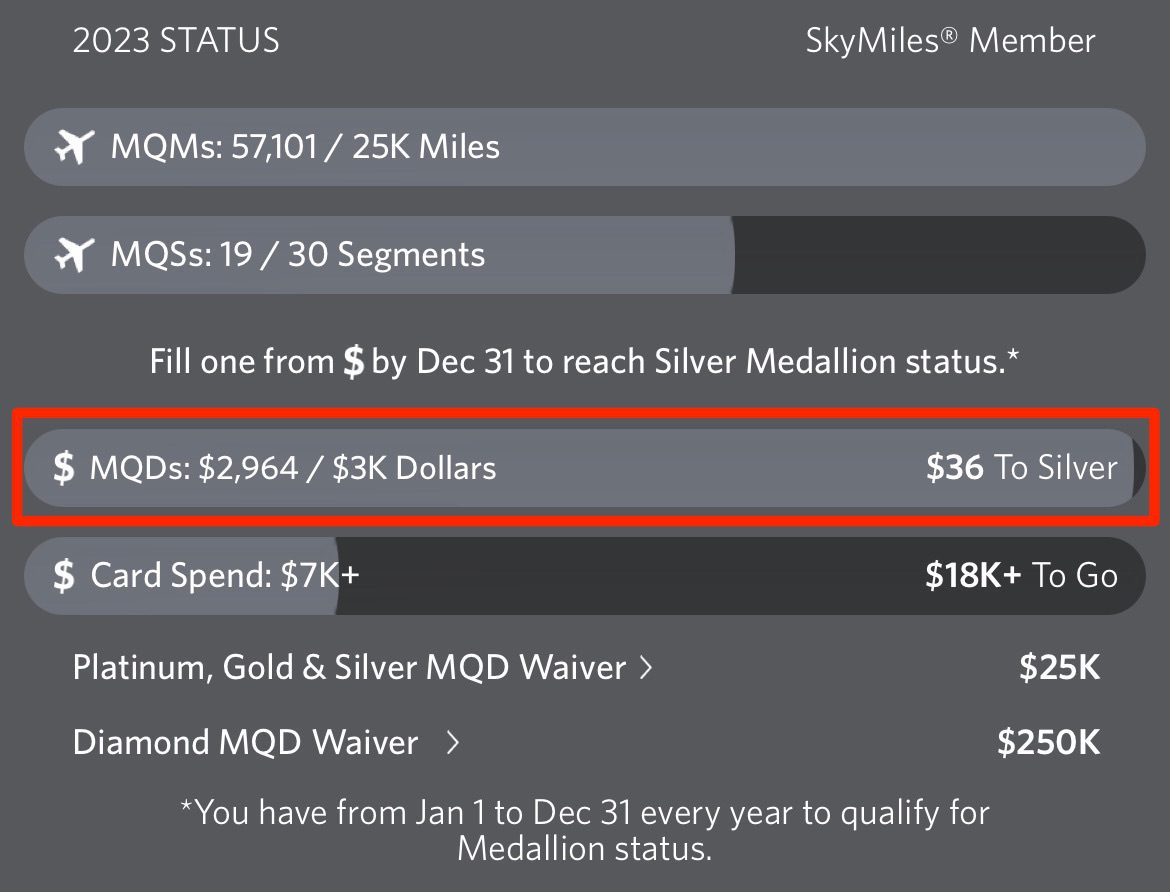 That's right. I was $36 MQDs short of requalifying for another year of status. Thirty-six dollars!

On the one hand, that's just plain annoying. After years of automatic extensions, there was no chance Delta would do me a solid and “gift” me those few dozen MQDs – it's just not worth asking. Delta has sold MQMs (often at exorbitant prices) to help status-chasing travelers over the edge in years past, but hasn't done so in 2022.

So yes, I was annoyed. But on the other hand, it meant getting the final pieces I would need to keep my status would be a cinch. I had plenty of MQMs, so I wouldn't need to fly thousands of miles within the next few weeks. Even the cheapest possible domestic day trip would push me over the threshold.

One important thing to keep in mind: The price you pay for your Delta ticket isn't a 1:1 for MQDs. Only the the fare itself counts toward MQDs – not government taxes and fees. For example, my receipt shows that a $149.60 one-way flight to Chicago-O'Hare (ORD) would earn just $126 MQDS. Luckily, Delta always rounds up.

There's one elegant workaround for these spending requirements that could have helped me.: Put $25,000 on either your Delta SkyMiles® Platinum American Express Card or the Delta SkyMiles® Reserve American Express Card in a year, and Delta will waive the MQD requirements for your status. That works for all but Delta’s highest Diamond Medallion Status, which requires an absurd $250,000 in card spend to get the waiver.

But that wasn't worth it to me. While it might be tempting to keep swiping your favorite airline's credit card, I'd much rather put all that spending toward earning a big welcome bonus on a new travel credit card. It's ultimately a personal question, but to me, the opportunity cost of spending all that money on a Delta credit card instead simply wasn't worth it.

Had I been thousands of dollars away (or even hundreds), I wouldn't have even entertained this. But in this case, a quick, cheap flight last week was my solution. And I had a pathway to make it even cheaper.

Putting My Amex Airline Credits to Use

On paper, these credits are for ancillary fees like bags and seats – not actual airfare. But in practice, that's not quite true: There are a handful of creative ways you can put these credits to use to cover the cost of flights … especially Delta.

Read our full guide on the best ways to use these airline credits to get the most out of them!

Fortunately, I had a $90 Delta eCredit laying around from rebooking a previous Delta flight after a price drop. After putting that toward a $261.60 roundtrip flight to Denver, I charged the remaining $171.60 to my Hilton Aspire card. Within a few days, my $250 airline credit kicked in to cover it.

That doesn't mean I booked this flight for free. Just the opposite: I pay $450 a year for Hilton's top-of-the-line credit card, which we think is the best hotel credit card, period. But ensuring I put that credit to use before it resets for the New Year gave me yet another reason to justify requalifying for status.

Getting a Head Start on Status for 2023

Delta does something unlike any other airline when it comes to chasing and requalifying for elite status.

Earn more credits than what you need to unlock AAdvantage Gold Status with American, but not enough for the next level? Ditto for United Premier Silver, but not Premier Gold? It all resets to zero at the start of the next status year.

But not with Delta: The Atlanta-based airline rolls over any Medallion Qualifying Miles (MQMs) you've earned above your current tier into the following year, giving you a headstart. Medallion Qualifying Dollars (MQDs) don't roll over, but this is still unique among the major U.S. airlines.

And it was no small matter for me. 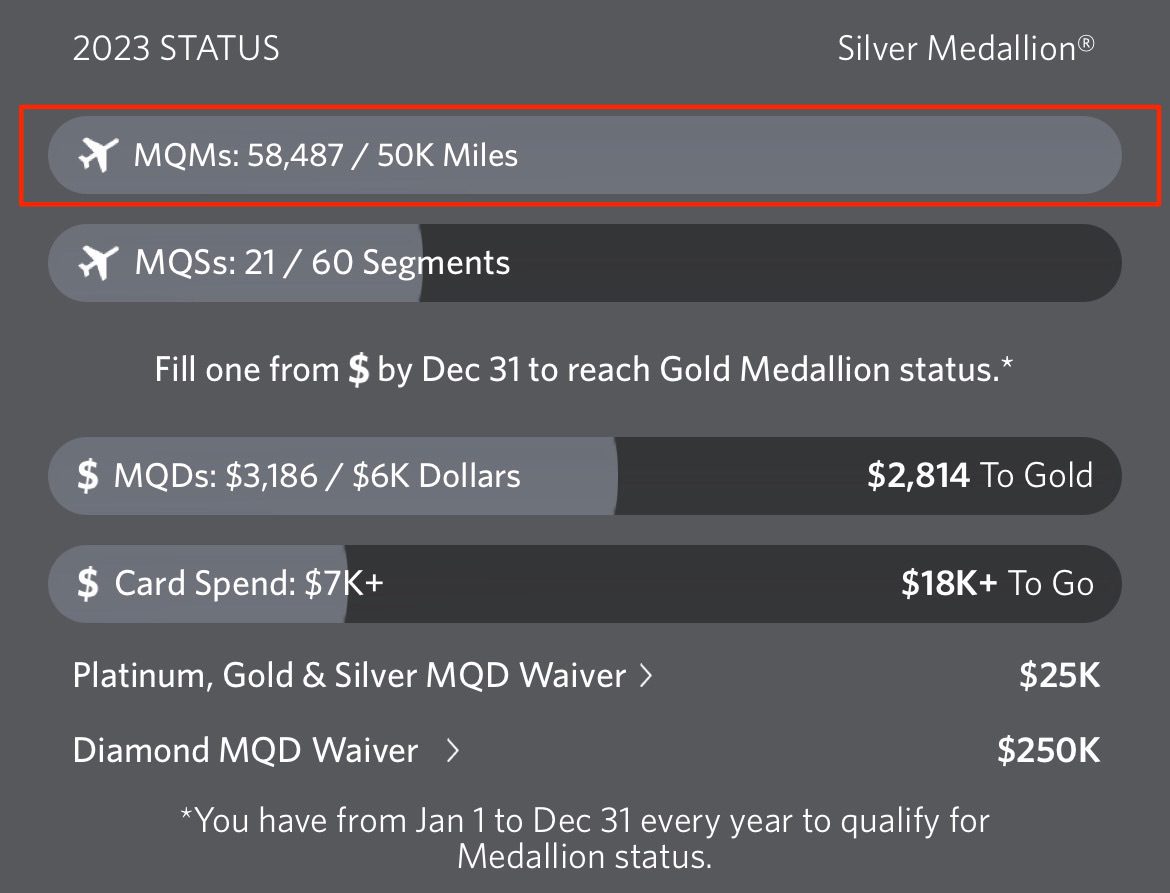 Had I not taken that trip to hit Silver status by the end of the month, it would have all been set back to zero. You need at least some level of status with Delta to be eligible for these rollovers.

Of course, I'll still need to earn at least $3,000 MQDs next year to keep the Silver streak alive. Will I do it? That's a question we can revisit next year – I'm not sold. And my odds of climbing even higher seem slim after Delta raised the spending requirements to reach Gold Status and up.

But at least keeping status alive for 2023 puts me in prime position to do so, if it makes sense.

Things to Keep in Mind for Your Status Quest

Still on the fence about what to do regarding airline status next year? There are some basic points to keep in mind.

Above all else, please remember: Airline status isn't necessary for everyone. Now more than ever, earning status requires a massive amount of spending … and that's the antithesis of all things Thrifty Traveler. Our entire mission is traveling more for less.

You need to fly and spend a lot to earn status (and also fly a lot to make use of the benefits it may or may not bring). This doesn't mean it never makes sense to go out of your way to earn (or keep) status. But it does mean you need to think critically about how much the benefits of earning status are actually worth versus blindly chasing the shiny object of status.

I admit it: I'm a hypocrite.

I've told anyone who would listen not to worry about status or spend an extra dime chasing it. And yet here I am – fresh off a quick domestic trip for the sake of requalifying for another year of status with Delta.

But here's the point: Rather than simply chasing status for the sake of having airline status, I thought long and hard about what it would cost me – and how much I would benefit. I came to the right answer for me … I think.

My answer may not be the same as yours – and it shouldn't be. I just hope you do the same: think it through.