On Monday, Chase and British Airways announced a new 30% transfer bonus for Ultimate Rewards points transfers. This transfer bonus, which is a first for Chase, is a big deal for many reasons – especially if you have upcoming travel plans on American Airlines or other OneWorld alliance partners.

You might be asking yourself just how exactly you can redeem British Airways Avios for maximum value. We'll break down our top four redemptions and what you need to know before booking them.

The Skinny on British Airways Avios

Before we get into our favorite British Airways redemptions, we need to first dive into a few quirks of the Avios points program. For starters, British Airways has a distance-based award chart. That means the number of miles needed to book an award ticket is based on the actual distance of each segment you fly.

There are a few other things to note when it comes to booking British Airways awards which are as follows.

So what can you book with the 30% transfer bonus from Chase Ultimate Rewards to Avios?

Shorthaul Flights within the U.S. on American Airlines

One of the best ways to book a short domestic flight in the United States is by using British Airways Avios. Yes, you read that right. British Airways is a Oneworld alliance member, which means you can book flights on partner American Airlines with your Avios.

And British Airways is one of the few to use a distance-based award chart (as described above), meaning flights of 1,150 miles or less will cost just 7,500 Avios each way. Factoring in the 30% transfer bonus from Chase, you could transfer in just 6,000 Chase Ultimate Rewards points to book a one-way flight. It is worth noting that transfers must be in increments of 1,000 points.

With a range of 1,150 miles, you could fly from Minneapolis-St. Paul (MSP) to Chicago-O’Hare (ORD), New York City-JFK (JFK), or Washington, D.C. (DCA). Other options include ORD-Denver (DEN), JFK-Miami (MIA) and more. Put in your desired destinations at GCmap.com to see if your travel plan makes the cut under 1,150 miles.

Just keep in mind these flights must be nonstop, otherwise British Airways will charge you per segment. 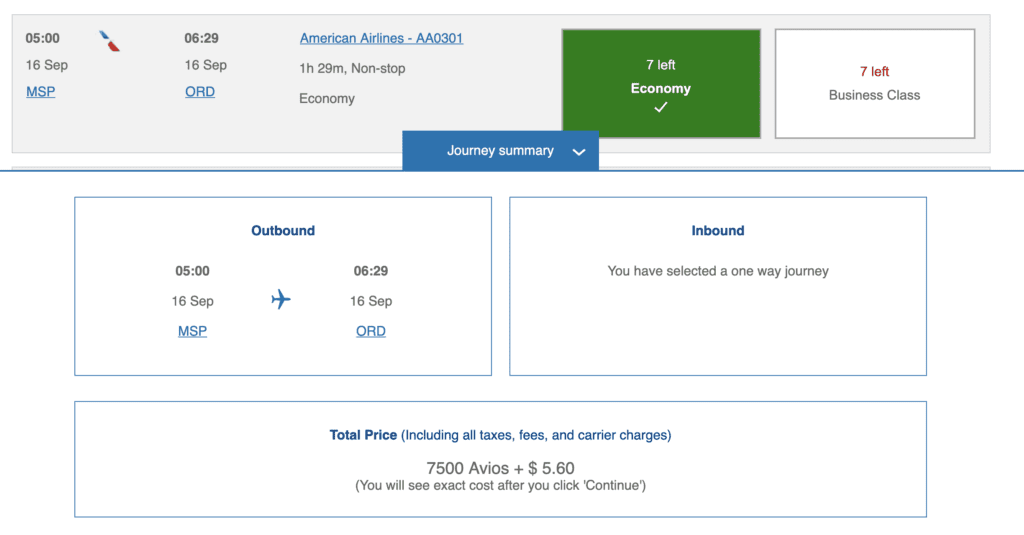 British Airways’ site can be spotty, so your best bet to find award availability is to look at American Airlines’ website. Then input your flight details at BritishAirways.com, and select “Book with Avios” or call up the airline to make the booking.

No matter your route, there are some serious savings here, especially when you factor in the transfer bonus from Chase Ultimate Rewards. A round trip domestic flight for only 12,000 points? Yes please.

Flights to Hawaii on American Airlines

There are lots of ways to get to the Hawaiian Islands on the cheap, and with Southwest adding service, competition is as strong as ever. However, using British Airways Avios to fly American Airlines using the same principle laid out above is one of our favorite ways to score a cheap trip to Hawaii.

While American charges 45,000 AAdvantage miles for a round-trip from the West Coast, you can book the exact same flights for just 25,000 British Airways Avios. Factor in the 30% transfer bonus from Chase Ultimate Rewards and you can score a round trip flight to Hawaii from 20,000 points!

I have flown British Airways twice and both times were on inter-European flights. Most recently, I flew from Amsterdam (AMS) to London Heathrow (LHR) for just 7,500 British Airways Avios one way. Because these flights are on British Airways, the peak and off-peak pricing are in play.

Any award within 650 miles of London will be either 4,000 or 4,500 Avios one-way depending on whether it is a peak or off-peak award (plus taxes & fees). Factoring in the transfer bonus from Chase, you could transfer in 4,000 Ultimate Rewards points to book a one-way flight at either redemption level.

Of course, it is always a good idea to check the cash prices for flights on the routes you are looking at. There is a plethora of European low-cost carriers that can make these routes a bargain, but there are still many situations where the Avios transfer is a better deal, especially with the Ultimate Rewards transfer bonus.

Like British Airways, Iberia Airlines also has a distance based award chart. The airline divvies up how it charges for award flights by the total distance you’ll travel each way.

And while they share a name, British Airways Avios are separate from Iberia Avios … kind of. So long as both accounts have been open for at least 90 days and remain active, you can transfer Avios between the two airline accounts. That means you could get the 30% transfer bonus from Chase, then kick those miles over to Iberia.

Iberia also use peak and off-peak pricing, meaning award flights are cheaper outside of the peak travel season. But Iberia’s definition of “off-peak” has generally been insanely generous. It means you can fly at the lowest rates for nearly 2/3 of the year.

Only July and August are roundly considered peak season, with some occasional weeks and weekends throughout the year also blocked out for peak travel. Check out Iberia’s full calendar to scope out the dates.

The end result is that Iberia consistently offers the cheapest way to get to Europe in either business or economy. Factor in the 30% transfer bonus from Chase Ultimate Rewards and the deal only gets sweeter. Check out the Iberia award chart below.

The distance-based chart generally means that your best deal is flying to and from the East Coast, as you can expect to pay just 17,000 Iberia Avios for a one-way economy flight during the off-peak season. For West Coast travelers, that same flight is 25,500.

However, there’s great news for midwestern flyers. Although the flight from Chicago-O’Hare (ORD) to MAD should be more expensive, Iberia carves out a specific exception that treats it as an East Coast flight. So you can fly nonstop from ORD for just 17,000 miles in economy – or 34,000 miles in business class.

Chase offering transfer bonuses on Ultimate Rewards is a potential game changer. Even if you don’t have plans to fly on British Airways, keep the Avios program in mind for sweet spots with many of their OneWorld Alliance partners.