Want to Save on Flights to Europe? Focus on Flying to the Cheapest Cities!
Skip to content

Got designs on a trip to Europe in 2023? We've got good news: Cheap flights to Europe are in steady supply … especially if you know where to look.

We've already identified some of the best U.S. airports for cheap fares across the Atlantic. But the same holds true on the other side of the pond: Some cities are regularly cheaper (and we mean much cheaper) to fly to over in Europe. Again and again, we're finding and sending the cheapest transatlantic fares to Thrifty Traveler Premium members to some of the same destinations.

From the Emerald Isle to the Iberian Peninsula and all the way up to the Northern Lights and back, these destinations with roundtrip fares under $500 – and sometimes even under $300 – are easily worth a visit. But even if they're not on your radar, you'd be wise to hop on one of these flights. The reason? Flights within Europe are crazy cheap, meaning you could score a cheap longhaul flight, then connect onward to your final destination and come out way ahead. Just see how cheap these flights from Madrid (MAD) across the continent can get… 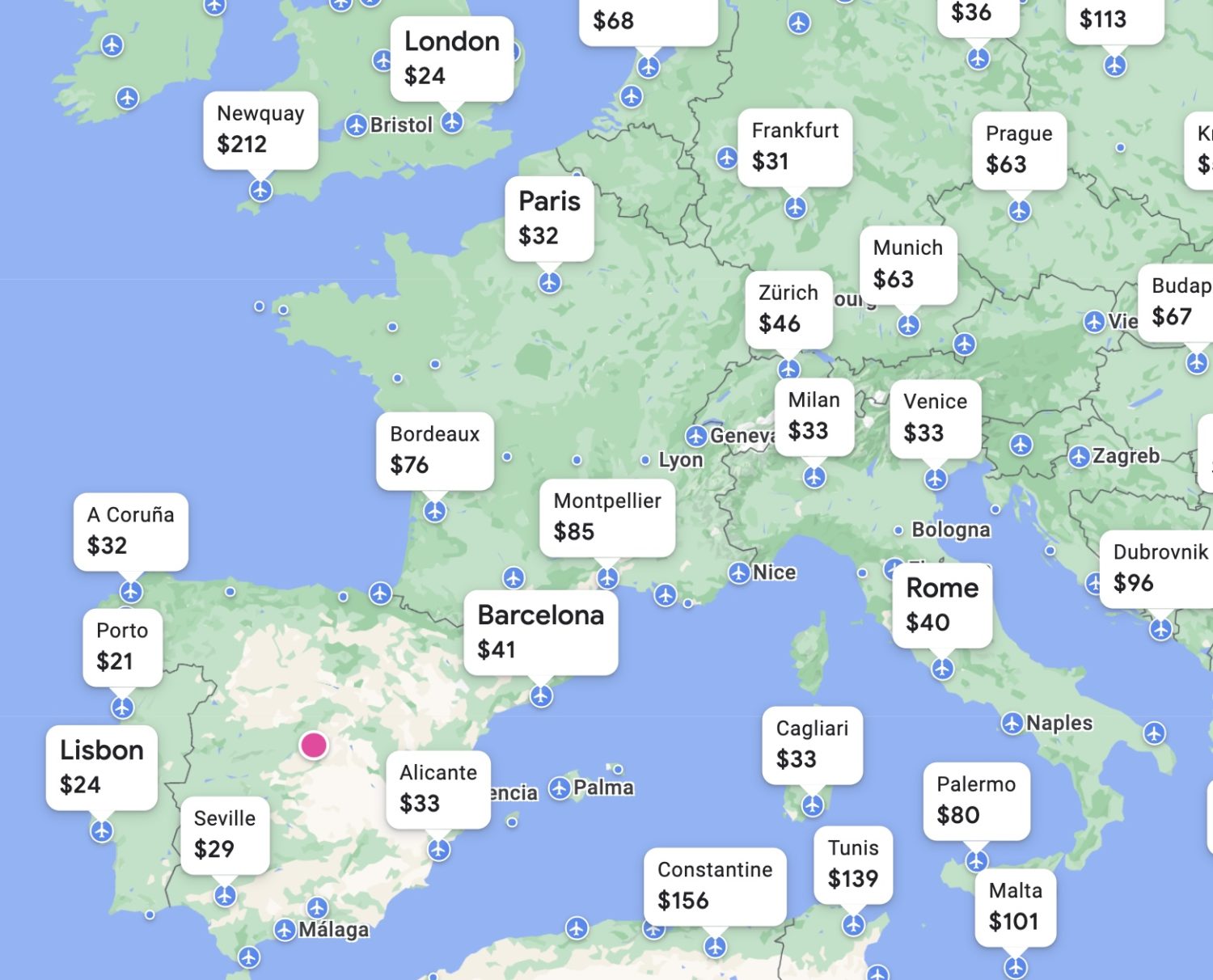 So let's take a look at those places where the cheap flights are flowing and get started on planning your trip.

Thanks to the nation's flag carrier Aer Lingus and competition from the big U.S. airlines as well as European ultra low-cost carriers, Dublin (DUB) is the perfect place to find a cheap flight and start a European journey. How cheap? This Thrifty Traveler Premium flight deal was a doozy. Dozens and dozens of U.S. cities featured Dublin fares for less than $500. If Dublin is on your list, great. Even if it isn't, you could book a cheap roundtrip fare like these, spend a few days checking it out, then head onward to Europe. 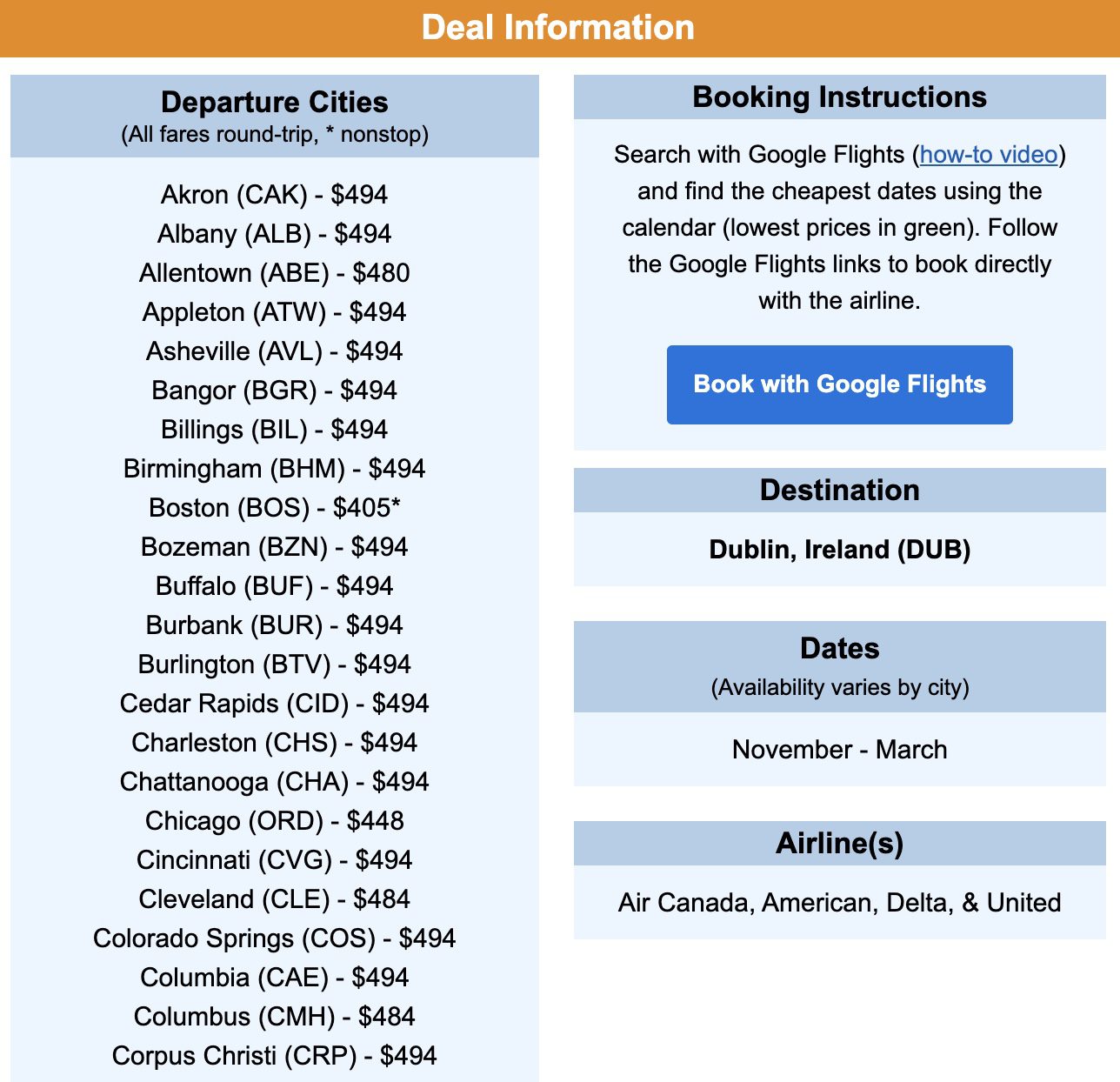 Remember when we mentioned Aer Lingus? Well they aren't just a decoy. Aer Lingus runs nonstop routes all over North America. From time-to-time, they put those routes on sale … big time! 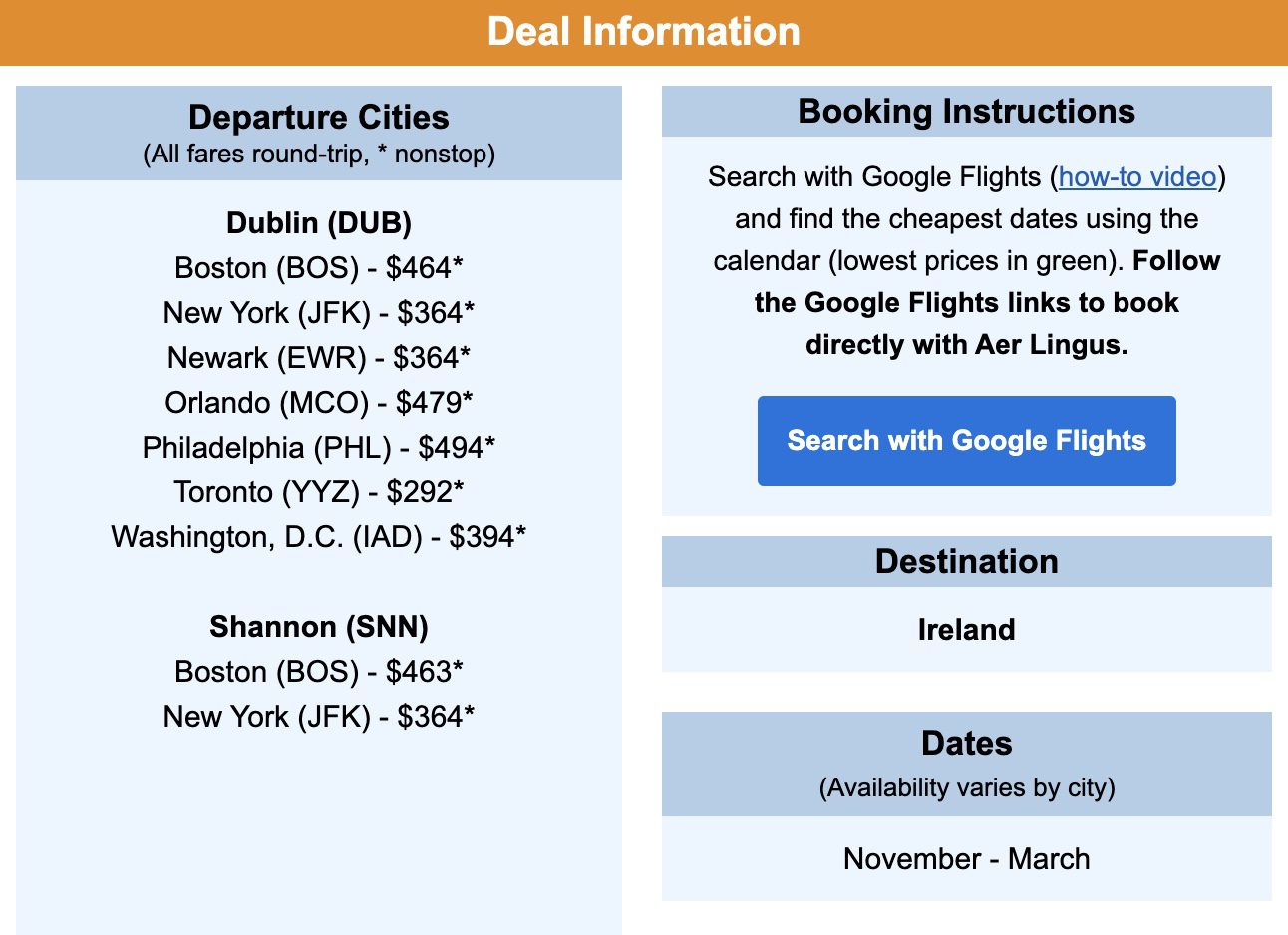 Get ultra-cheap fares to Dublin and elsewhere in Europe with Thrifty Traveler Premium!

That Toronto (YYZ) fare is real. Less than $300 to get to Europe is a no-brainer. And it just proves that Ireland is a first ballot hall-of-famer for finding cheap flights to Europe.

Yes, really. While they might have a reputation for expensive flights (and then get even pricier on the ground), we've seen fares to the likes of Denmark, Finland, Norway, and Sweden tumble in 2022.

It's all thanks to extremely competitive fares from a handful of airlines like SAS, Norse Atlantic, Icelandair, and even Finnair. Lately, Norway has been especially cheap. This flight deal, from just about a week ago, featured fares in the $400s from all over the U.S. to Oslo, Norway (OSL) and other destinations like Stavanger (SVG), Bergen (BGO), and Trondheim (TRD).

And while fares have dipped to Norway recently, you can consistently find crazy cheap flights to Helsinki (HEL). Look at this one!

With Charlotte (CLT) being an American Airlines hub, Delta snuck in and undercut those American and Finnair (they're partner airlines as part of the Oneworld alliance) fares with its own cheap flights, as well as on SkyTeam partner Air France. We love it when the airlines fight: That's how we win!

Finally, Copenhagen (CPH) also benefits from some consistently cheap airfare. These fares from coast-to-coast were all below $500 roundtrip. 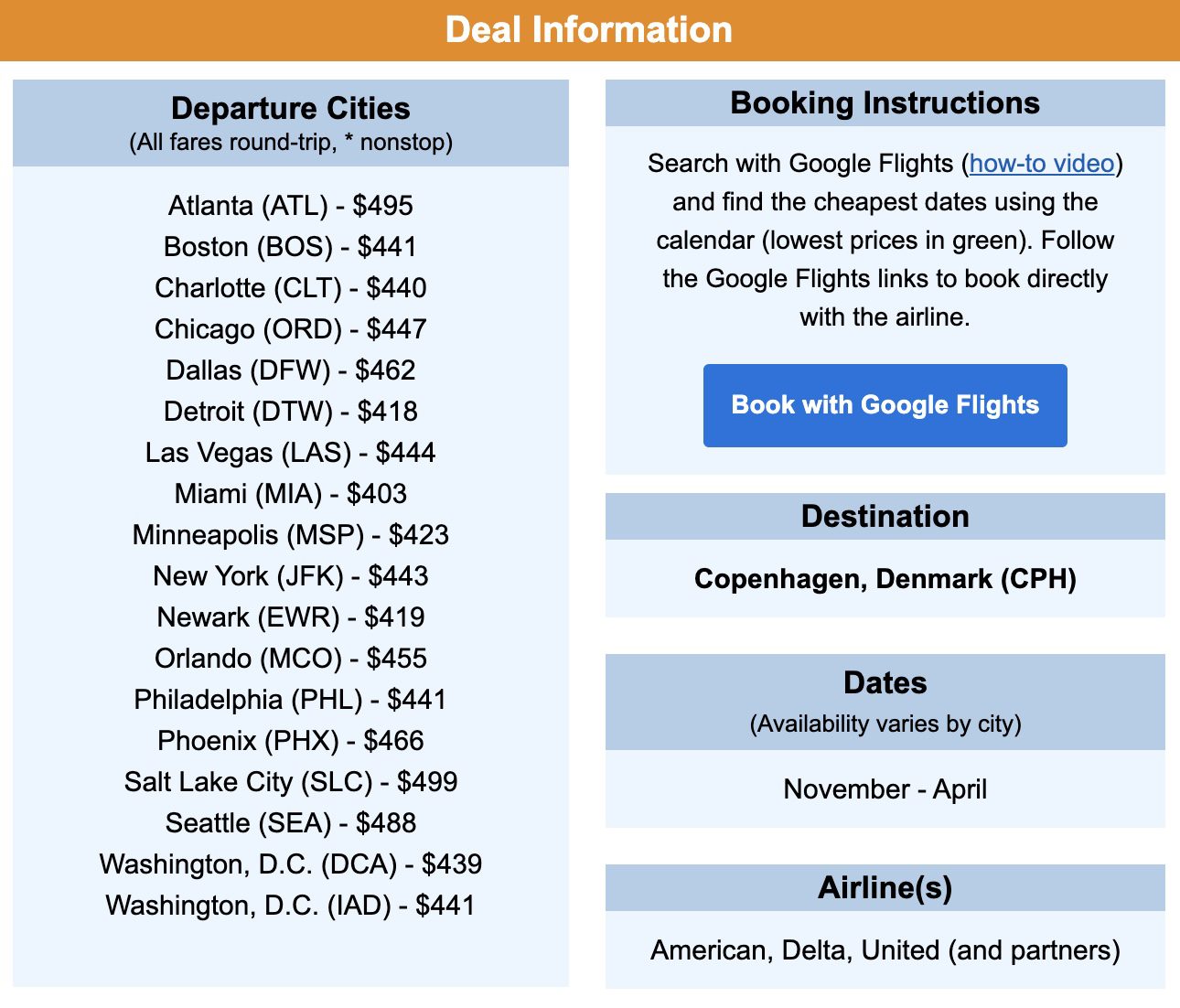 If you can get to Spain for cheap, you can get almost anywhere in Europe for less. Lucky for you, cheap flights to Spain aren't hard to come by. 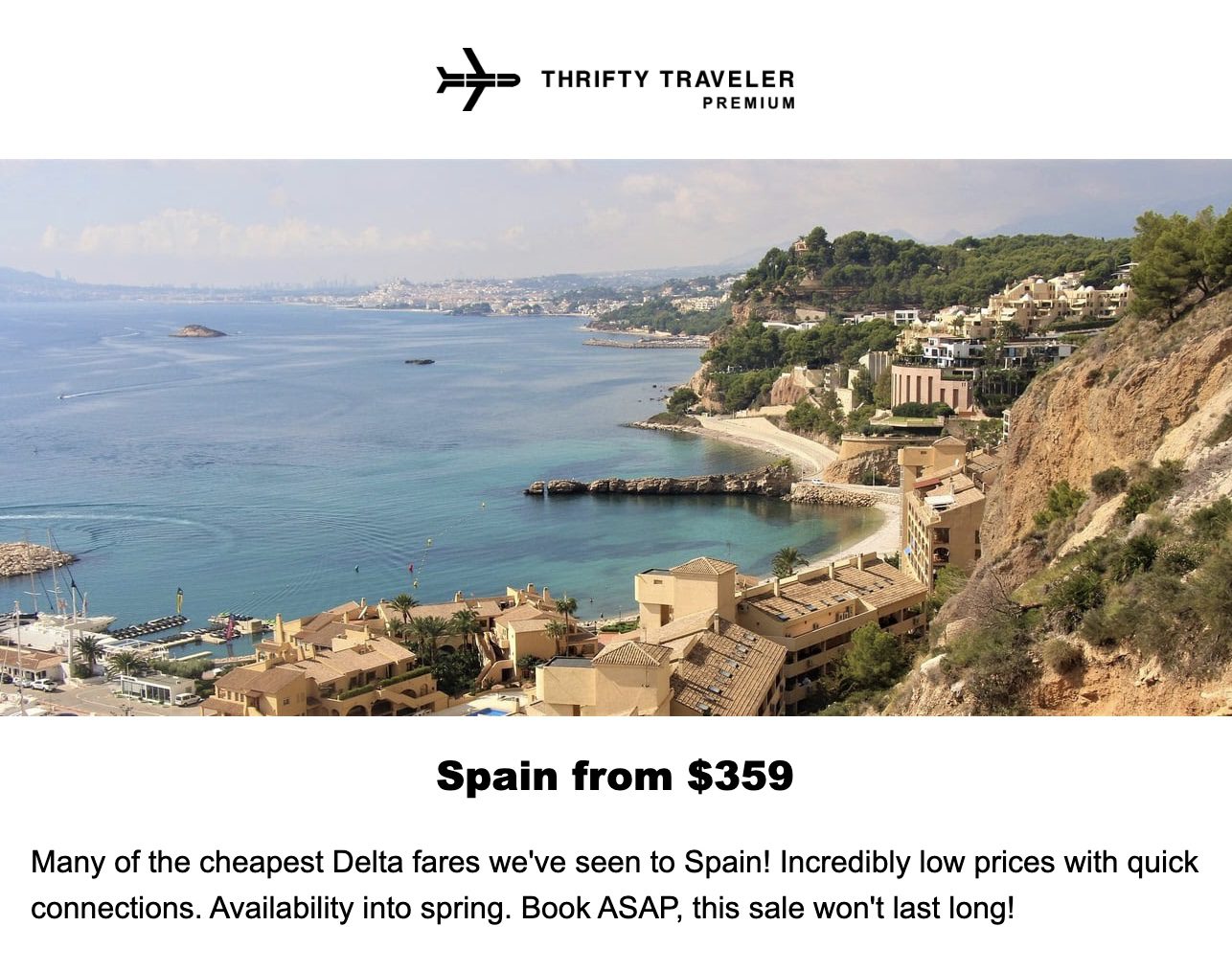 Fares into Spain are regularly the cheapest you'll find across the continent. There are so many airports in the country, every airline flies there, and some crazy low fares from Iberia always lead to big sales.

While you'll often find flights into Madrid (MAD) or Barcelona (BCN) at the lowest price, that isn't always the case. People might overlook the Spanish Islands as an amazing place to visit – and they get cheap fares, too.

The Canary Islands are beautiful all year around and very cheap once you get there. The same goes for Mallorca! A sale this widespread to Mallorca had our heads spinning. Visiting Spain is as cheap as ever right now, and the nation is as close to a sure thing as anywhere for finding cheap flights to Europe.

Whether you fly them or not, you can thank TAP Air Portugal for the low fares you routinely find to the beautiful Atlantic nation.

Portugal is an incredible place to visit all on its own, but either Lisbon (LIS) or Porto (OPO) would be the perfect place to start or end a European adventure with a cheap ticket. This flight deal to Portugal featured some insanely low fares starting at just $401 to get from Chicago-O'Hare (ORD) to Lisbon early next year.

These prices are gone now, get the next cheap fare in your inbox with Thrifty Traveler Premium!

Even if Lisbon isn't your cup of tea, the Azores islands might be. Thanks to a nonstop flight from the continental U.S., a flight to Ponta Delgada (PDL) in the Azores is extremely fast and easy.

This United flight is the final connection on what was a much bigger deal from flights all over the country connecting onwards to Ponta Delgada. It's just another example of cheap flights to Portugal, the likes of which we find all the time.

Ireland, Scandinavia, and the Iberian peninsula take the cake when it comes to consistently cheap flights. But the savings don't have to stop there.

The first runner up is Reykjavik (KEF) in Iceland. It's a major hub for cheap flights from both Europe and North America thanks to some low, low fares from Icelandair. 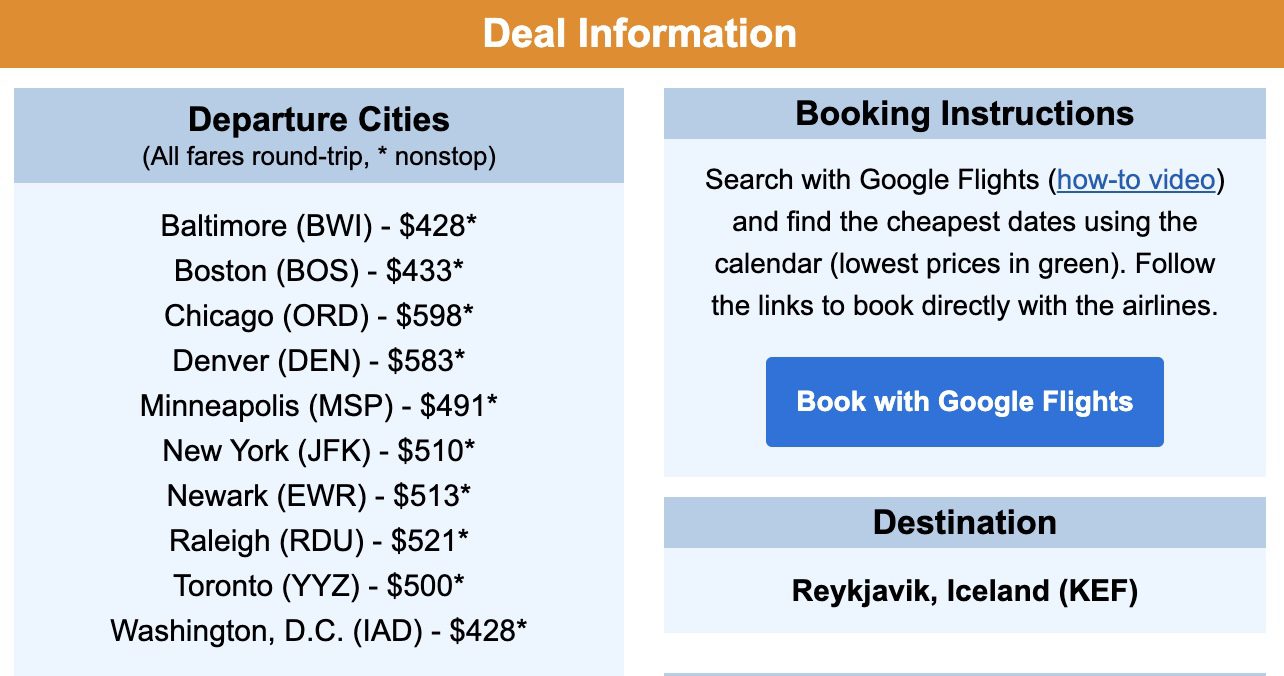 Plus, it's perfectly designed for stopovers, where you take a few extra days in Iceland heading either west or east before continuing on. We actually have the perfect Iceland stopover itinerary I whipped up after two long weekend visits to the island over the last few years.

Way, way further east is the city of Vienna in Austria. Vienna (VIE) was one of the only airports that kept offering cheap flights from the U.S. as fares soared elsewhere in Europe. In fact, it's been an unexpected stronghold of cheap fares over the last few months whether you're flying nonstop from New York or all over the country. Italy is one of the most sought-after destinations in the world, but that demand doesn't always mean cheap flights. Lately, that's changed … but even when prices to the rest of Italy are high, flights to Milan (MXP) can be a huge bargain. Fly to Milan and you're just a quick train ride away to the likes of Rome or Venice as well as the Swiss Alps and Dolomites to the north.

Finally, we have Budapest (BUD): one of our favorite under-the-radar European cities and a spot where your dollar goes the furthest in Europe.

This Budapest (BUD) fare was the lowest in a deal that featured close to 200 fares from U.S. cities to Hungary.

Starting your trip to Europe with flights to Spain, Ireland, Portugal, and Nordic countries is a surefire way to save on airfare.

While we've seen airfare dropping across the board over to Europe, these destinations stand out as having the cheapest fares overall. Starting here, then connecting onward throughout Europe to your final destination is a sound strategy to save money on your next European excursion.