As international travel moves its way back to normalcy, it has many of us itching for an adventure. And what better spot to reboot your overseas travels than Europe.

There is truly something for everyone, which is why Europe tends to be near the top of many travelers’ bucket lists.

But finding a cheap flight isn’t always easy. Arming yourself with information on the best places to find cheap flights to Europe can go a long way. Save that hard-earned cash for activities on the ground instead!

Thrifty Tip: Don’t live near one of these airports? Using a positioning flight to get to these cities listed below can save you hundreds, and potentially even thousands on future travel.

Here’s a look at the best United States airports to find cheap fares to Europe.

Related Reading: Europe Travel Restrictions for Americans: Everything You Need to Know

Often the best U.S. airport for international deals, including ones to Europe, is New York (JFK).

Being one of the busiest airports in the world means some of the highest traffic and the most amount of airlines, leading to cutthroat competition. From Iberia and Level airlines, up to Emirates and Qatar Airways, the range of airlines that New York (JFK) hosts is nearly unmatchable. This surplus of competition is a recipe for cheap airfare. And cheap is an understatement.

Known as the biggest gateway in and out of the U.S., New York (JFK) offers over a dozen nonstop routes to Europe alone on a variety of airlines. Just this fact alone is a key driver for low prices. As airlines battle for customers in their seats, they rarely overlook JFK when it comes to marketing some of the best deals you’ll ever find to Europe.

Here’s a look at some of the best deals we’ve seen out of New York (JFK).

One of the best deals we have ever seen to Athens originated out of New York (JFK). Flying Delta, it was possible to fly nonstop to Greece for less than $400 roundtrip!

This sub-$200 roundtrip flight to Spain was one of the best deals we’ve ever seen out of New York (JFK) to Europe. It doesn’t get much cheaper than this! 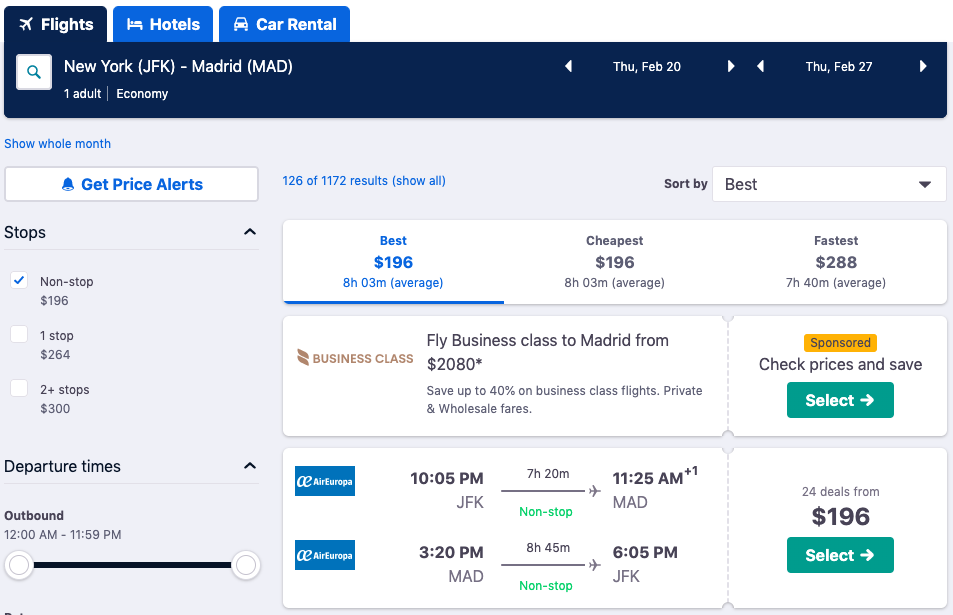 This flight deal is no longer live. Don’t miss the next deal we find: Sign up for Thrifty Traveler Premium!

Similar to nearby New York (JFK), Newark (EWR) is also one of the best airports if you’re searching for cheap flights to Europe.

Newark is a major United Airlines hub airport that has several nonstop routes to Europe. It also sees quite a bit of competition from other airlines (like Delta, American, and many more).

Flash sales are quite common from Newark to Europe. Whether it be on Scandinavian Airlines, LOT, TAP Air Portugal, Swiss, or United, bargain fares can easily be found year-round from Newark (EWR).

One of our recent Thrifty Travel Premium deals we alerted our members to was this: nonstop from Newark (EWR) to Porto, Portugal (OPO) for $333 round trip!

Boston (BOS) is a hotbed for competition from European and American airlines, and continues to get some of the lowest price tags we’ve seen to Europe.

Similar to the New York City airports, Boston is a sweet spot for cheap fares to Europe due in large part to the vast number of airlines providing European service.

British Airways, Virgin Atlantic, Aer Lingus, Iceland, and Iberia are all key players when it comes to pressuring U.S.-based airlines to keep their fares low on transatlantic routes. Some of the deals we’ve found out of Boston to Europe speak for themselves…

Our nation’s capital and home to Dulles Airport (IAD) receives their fair share of competitive fares to Europe.

Like the other east coast cities, proximity to Europe plays a role in the reasoning behind cheap fares. Along with the high levels of traffic to and from Europe by several U.S. and European carriers. All these factors are a catalyst for low prices across the Atlantic.

Washington, D.C. (IAD) has boasted some of our favorite flight deals we’ve ever seen to Europe. With several nonstop routes, IAD is one of the best spots to score an excellent fare to Europe.

Here’s one of the recent gems we’ve uncovered and sent to Thrifty Traveler Premium members:

Philadelphia (PHL) is one of American Airlines’ major hubs and shines as one of the top U.S. airports where you’ll find cheap flights to Europe.

Grabbing a cheap nonstop flight to Dublin (DUB) or Barcelona (BCN) is a pretty easy task from PHL. American Airlines generously targets Philadelphia with low prices to Europe. And you can reliably count on roundtrip flights to Europe in the $500s and oftentimes lower:

Year after year, Miami (MIA) continues to hold a reputation as one of the best sweet spots to grab a cheap flight to Europe.

Similar to Philadelphia (PHL), this American Airlines stronghold is known to boast ultra-low fares across the Atlantic. Whether it be on American Airlines, Aer Lingus, TAP Air Portugal, or Turkish Airlines, this competitive market in Florida frequently gets fares in the $400s and $500s roundtrip to different parts of Europe. And sometimes much, much lower.

Under $300 roundtrip and nonstop to Spain on Delta and their partner? Yes, it’s really possible:

Yes, there are airports beyond the east coast of the United States that regularly have incredible deals to Europe.

Chicago (ORD) is a prime example. Being one of the largest airports in the world means massive amounts of traffic on nearly every airline in the skies. You can find a hot fare from Chicago to Europe almost year-round.

Chicago is one of the few airports that is a shared hub: it is the primary hub for both United Airlines and American Airlines. Just the sheer volume of international traffic contributes to the ongoing fare war between airlines battling for consumers.

Aggressive marketing on transatlantic routes is very obvious here. Flights to Europe often drop to the $500s roundtrip and below.

Take a look at a previous flight deal we found to Ireland from Chicago:

Christmas in Dublin under $300 roundtrip? That’s cheaper than a flight from Chicago to New York City for the holidays!

As one of the other largest airports in the world, Los Angeles (LAX) services dozens of airlines, including many to Europe. Many assume there are never stellar deals from the west coast to Europe. But this is not the case.

Los Angeles (LAX) is a phenomenal airport to target when scoping out the best deals to Europe, especially if you live on the west coast.

The primary driver for consistently low fares to Europe is the competition. Los Angeles (LAX) sees traffic from several European carriers along with many nonstop routes on U.S.-based airlines. For example, Delta, United, and American all fly non-stop from Los Angeles (LAX) to London (LHR).

Similar to New York City, Los Angeles is considered to be one of the most desirable gateways in and out of the U.S.

In normal times there is a heavy amount of business (and leisure) travel in and out of L.A from Europe. These factors are a solid recipe for excellent pricing across the pond.

This United Airlines hub has seen some shockingly low price tags on flights across the Atlantic. Situated nicely with several budget airlines influencing prices, San Francisco (SFO) frequently stuns us with some of the best deals we’ve seen to Europe.

Travelers can regularly expect to find fares in the $500s roundtrip from SFO to many cities in Europe. And when airlines target major hubs like SFO for flash sales, travelers benefit from even cheaper fares:

How to Find Cheap Flights to Europe

When starting your search for cheap flights to Europe, we always recommend starting with our favorite flight search engine – Google Flights. It’s the best option with the most up-to-date information that allows you to book flights directly with the airlines.

Or you can leave the searching to us. With our Thrifty Traveler Premium service, we find and send flight deal email alerts from over 175+ U.S. and Canadian departure cities. You’ll get alerted to the best deals out there. And that’s true whether you want to travel domestically or to all corners of the globe.

Just last week, we sent our Thrifty Traveler Premium members a flight deal alert to Europe that was available from $392 to 13 different European cities from multiple U.S. departure cities. 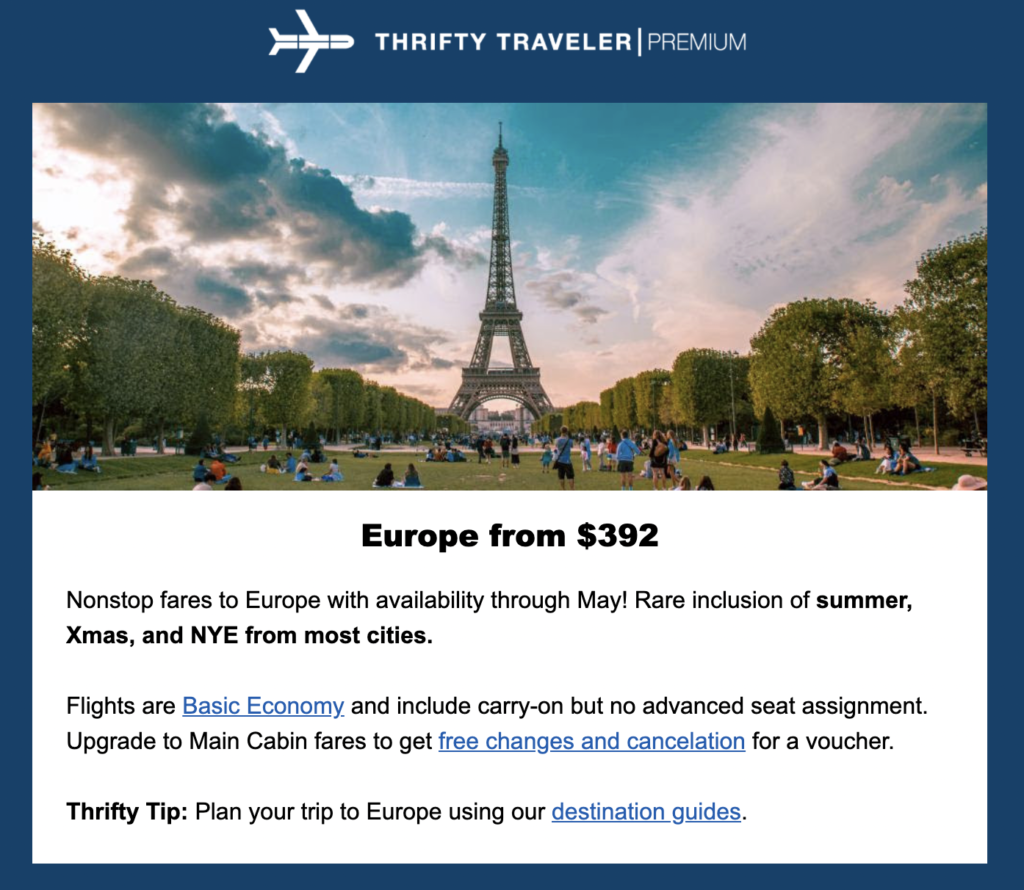 And these aren’t last-minute fares. There were dates available through May 2022, and the deal even included peak summer, Christmas and New Years dates from most cities.

Understanding exactly where to be looking for affordable airfare to Europe is just the start to accomplishing some of your travel dreams.

And, just because flight deals to Europe may rarely exist from your home airport, doesn’t mean you’re out of luck. There is always a way to fly, for much less than you think.