What Sets Southwest Airlines Apart: The Good and the Bad
Skip to content

Even if you’ve never flown Southwest, you’ve probably heard fellow travelers sing its praises. And if you have, you get the hype.

Here’s what it boils down to: Southwest Airlines simply does things differently. While other airlines are making it more confusing than ever to fly with basic economy fares, that’s just not the case with Southwest. But it’s not all good news – there are some downsides to Southwest, too.

Here’s a quick roundup of what we love (and don’t) about Southwest Airlines.

What We Love About Southwest

As airlines have tacked on fee after fee, getting anything included with your ticket is a blessing. Southwest is the only U.S. carrier that still includes two checked bags, up to 50 pounds each, free for every passenger. That’s a huge deal for travelers who prefer to check luggage versus carry on, or who are traveling with a significant amount of luggage.

On other domestic carriers, just one checked bag typically costs $60 round trip. If you’re planning to check two bags, flying Southwest can save you at least $120.

Earlier this year the Thrifty Traveler team flew to a conference in California. And we picked Southwest because we knew we could check all of our conference signs, display boards, and equipment for free. If you’re moving, going on a golfing or ski trip, or just have oversized bags you don’t want to pay extra for, Southwest may be your cheapest option.

No Change or Cancel Fees

Unlike most airlines, there is no fee to cancel or change your Southwest flight. You can cancel any Southwest flight and be given a voucher for later use in 2019. If you book with points you can also cancel with no fee and the points are re-deposited. 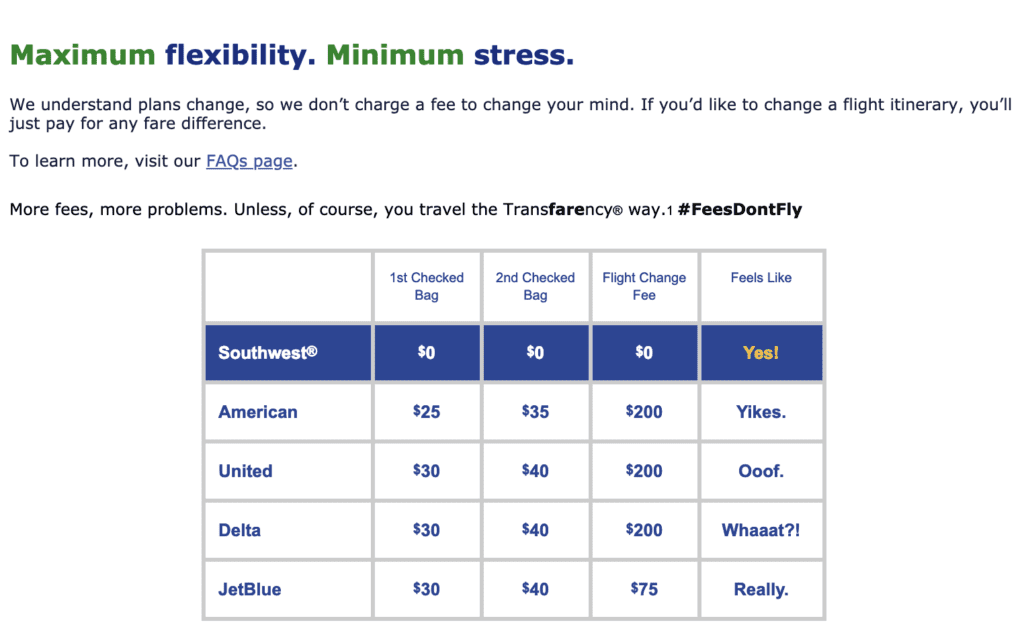 BOGO Flights with the Companion Pass

Southwest Airlines offers one of the most lucrative benefits in the world of points and miles: The Companion Pass.

It works like this: Once you earn it, the companion pass gets you a free companion – no matter whether you used cash or points to book your ticket. There are no blackout dates and no questions. Just pay the taxes and fees ($5.60 per person) on each flight and you’re set.

There’s no limit to how many times you can use the Companion Pass. So it’s not hard to see that this perk could save you hundreds – if not thousands – of dollars on airfare. Once you earn the companion pass, it’s good for the entire year in which you earned it AND the entire following year.

Unfortunately, it’s gotten harder to earn the Southwest companion pass over the years – aside from a now-expired promotion earlier this year that allowed travelers to get it after earning a single co-branded credit card bonus.

Not only is it our favorite way to book cheap flights you find here or through our Thrifty Traveler Premium service, but you can transfer the points on a 1:1 basis to Southwest Airlines, instantly.

Southwest is among the 12 airline and hotel transfer partners and the airline makes a great option for your Chase Ultimate Rewards points.  Especially with the airline now offering service to Hawaii, using Southwest Rapid Rewards points is one of the most cost-effective ways to get to the popular islands.

Thrifty Tip: See our guide on how to transfer Chase points to partner airlines.

Have elite status with another airline? Southwest offers their A-List status for 90 days to anybody with even the lowest-level status on any other airline.

Southwest will even extend the matched status for an additional 12 months if you can complete three round trip or six one way flights with the airline 90 days after your A-List status enrollment has been confirmed.

To match your airline status to Southwest’s A-List status you will need to email them at [email protected] and provide them with the following information:

Learn more about Southwest’s A-List Status Match and make your status on another airline work double.

Last but not least, the in-flight experience. The seats are comfortable, and the snacks are on point (name brand treats like Oreos and Ritz? Yes, please!). Additionally, Southwest has an app, and you can use it to access the inflight wifi entertainment. They even have live TV and some great movies to choose from! But above all, Southwest just has a different culture. It’s rare you’ll ever come across a flight attendant without a smile on his or her face, and most genuinely seem to care about their job.

What We (Don’t) Love About Southwest

Okay, there’s only one thing on this list. And it’s really not a bad thing – we just don’t love it as consumers. Here it is:

Maybe you’ve noticed this already, or maybe it just hasn’t occurred to you in your searches.

As you’re hunting for the best deals on sites like Kayak, Priceline, Skyscanner, or our favorite Google Flights, you won’t find fares from Southwest. Southwest doesn’t publish their fares on any Online Travel Agencies (OTAs are sites like Kayak, Priceline, Expedia, etc.), nor do their fares show up on Google Flights. The only place you can find Southwest flights are on Southwest’s own site.

Southwest has capitalized on consumers’ loyalty to their brand and kept their flights to themselves. This speaks volumes: travelers are so obsessed with and loyal to Southwest that they go straight to the Southwest website. But there’s a flip side to that. Despite its reputation as a budget carrier, Southwest is often charging slightly more than its competitors for the same flight – at least before you factor in the cost of baggage.

At the end of the day, it adds one extra step for the average traveler who isn’t hyper-loyal to Southwest. Keeping flights on their own site clearly isn’t harming their business, so don’t expect it to change anytime soon. But I sure would love to see Southwest prices on Google Flights.

Southwest Boarding: Love It or Hate It?

Some love it some hate it: the Southwest boarding order. Southwest’s boarding system is unlike any other U.S. airline.

If you’ve never flown Southwest, here’s the lowdown: The sooner you check in starting 24 hours before your flight, the lower boarding number you’ll receive. This is of course if you don’t pay for early boarding.

Then, at the gate, you line up in numerical order. Everyone boards starting with numbers A1-10, then A11-20, and so on. When you get on the aircraft, any seat you see open is available for you. No advance seat assignment, no selecting an aisle or window seat ahead of time. If you get on the plane and see a first-row aisle seat available, it’s yours! For some people, this process is stressful. Many flyers would rather just know exactly where they’re sitting or pay to be guaranteed an aisle seat or exit row spot. Others love the simplicity and unique approach.

Whether you love it or hate it, here are a few tips for getting the seat you want on a Southwest flight:

Southwest Airlines is unlike any other U.S. carrier. They set themselves apart from other airlines by going against the “charge for everything” trend in the airline world.

And while we’d love to see Southwest fares on Google Flights, I guess we’ll settle for searching on Southwest.com for the perks of flying with the airline.

All photos courtesy of Tomas del Coro via Flickr