Most travelers searching for airfare start and stop with their home airport. And unless they get lucky with a great deal, they may be forced to choose between swallowing the high price or frowning and forgetting about it. They're doing it wrong.

The key to cutting down international airfare is using positioning flights, short domestic flights from your hometown airport to a second hub in order to hop on a cheaper fare. Whether you're searching for your own international flights, booking a great fare through our Thrifty Traveler Premium service, or hopping on an insanely cheap mistake fare, this strategy can easily save you hundreds of dollars.

With international travel back on the menu as most countries around the world are back open to American tourists and domestic flight prices on the decline, this is the key to save big on your long flight abroad.

What is a Positioning Flight?

Wouldn't it be great if every airport, from the tiny to the enormous, could get cheap fares to fly abroad?

Unfortunately, that's just not the case. While we find cheap flights from 200+ U.S. (and Canadian!) airports big and small, the fact of the matter is that the major hubs get the best deals. And this is where positioning flights come in to help bridge the gap.

Think about the major airports in the U.S. with tons of competition that can drive down airfare prices. Here's a quick look at some of the biggest airports in the country with regular international flights:

Which of these major international hubs can you cheaply fly to? Airlines might charge you an arm and a leg if you start your search from your home airport to London-Heathrow (LHR), Rome (FCO), or wherever you're heading abroad.

But if you book a cheap separate flight to get to, say, Los Angeles (LAX) or New York City-JFK (JFK), you can likely save hundreds on that flight overseas. Or better yet, use points and miles to book that positioning flight for free.

Let's look at an example.

The Power of Positioning Flights in Action

With Europe wide-open to Americans this summer and travel demand sky-high, the steady stream of cheap flights to Spain, France, and Germany hasn't been. Yet we've seen some incredible deals to Greece, including an amazing $500 roundtrip fare to Athens (ATH) that we sent to Thrifty Traveler Premium subscribers a few weeks back.

But sadly, the whole nation didn't get the flight deal love. So even on the same dates you can catch a dirt-cheap ride on a nonstop flight from the East Coast this fall, here's the best you can find flying from Nashville (BNA) to Athens.

But those $502 flights were available around the same time from New York City (JFK) – and nonstop, to boot. And getting to New York from Nashville is generally quite cheap. So let's try out a positioning flight.

Get cheap flights like this sent straight to your inbox with Thrifty Traveler Premium!

Keep those dates and times in mind for your positioning flight as you fire up Google Flights. In this case, we're looking at a $193 fare to get to New York flying Delta – though you might be able to find an even better deal by waiting for prices to drop or setting a Google Flights price alert.

All the times and dates line up to make this one-stop flight to Greece and back work. Add those flights up, and you've got a round-trip ticket to Athens for $695 – more than $500 cheaper than the simple search you started with! You could drop the final price even lower by using points and miles to book the positioning flight – or booking the Athens flight using Chase Ultimate Rewards points through the Chase travel portal.

This is just one example, but it's a powerful method that can pay off on almost any big international flight. When you're trying to use your points and miles, positioning flights can be absolutely essential – especially if you're trying to fly in lie-flat business class.

Getting somewhere like Australia or Fiji on points and miles is one of the toughest award redemptions to pull off, as finding the award space is like a needle in a massive haystack. But last week, we sent Thrifty Traveler Premium members an absolute unicorn of an award alert: A two-for-one trip to Fiji, then onward to Australia or New Zealand flying Fiji Airways business class. And you could book it for as low as just 55,000 Alaska Mileage Plan miles! 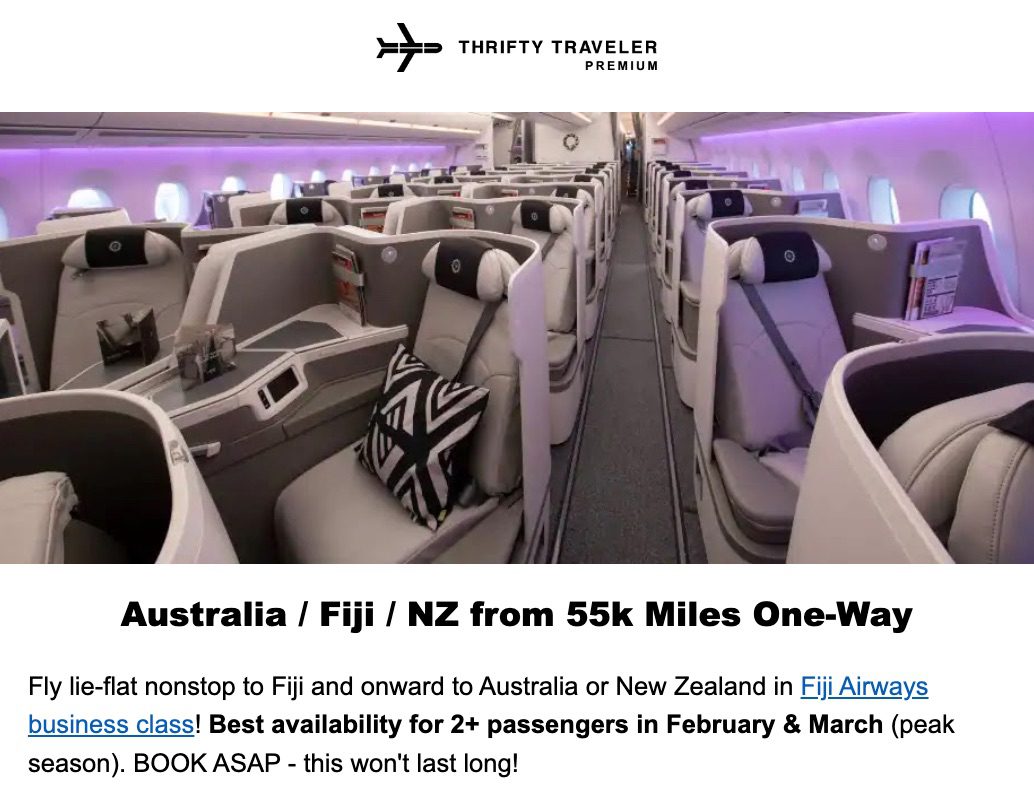 But if you were starting your search from Chicago-O'Hare (ORD) or Minneapolis-St. Paul (MSP), your searches would come up empty-handed. These Fiji Airways awards were only available on their nonstop routes from Los Angeles (LAX) or San Francisco (SFO). And that makes a separate positioning flight absolutely necessary to take advantage of bucket-list deals like this one.

We'll be upfront here: There is some risk to keep in mind with positioning flights. But that risk can easily be outweighed by substantial savings.

One-stop journeys booked together protect you if the first leg is delayed or canceled. If your first flight lands too late to catch the second segment, the airline will generally put you on the next flight. But that's not the case if you book a positioning flight separately. Some airlines will help you out when things go wrong … but you can't count on it.

So there's one critical thing to keep in mind: Now more than ever, give yourself plenty of time between flights. While the mass delays and cancellations we saw earlier this summer have improved, there's still more uncertainty than ever with booking positioning flights like this.

Read more: How to Survive (or Avoid) Flight Delays & Cancellations this Summer

Flight times are almost guaranteed to change from what you initially booked, so you'll need to monitor your reservations to make sure your airlines don't throw a wrench in your plans. And a last-minute delay or cancellation could ruin a trip if it means you miss your connection.

Only you can decide what you're comfortable with, but it's probably safest to give yourself at least 3 to 4 hours connection time between when your positioning flight lands and when that longer flight takes off – and even more on the way back home to the U.S., as you'll have to clear customs and immigration, then reclear security. You might even want to consider flying in a day early – just to be absolutely sure.

There are a few other things to keep in mind for your positioning flight:

Only you can decide whether these risks are worth it. To us, the savings of pairing a positioning flight with a great international flight deal can be enormous.

Positioning flights make any flight deal accessible from anywhere in the U.S. Don't let another incredible flight deal pass you by because it's not departing from your home city.