Domestic Flight Prices Are Up ... But Not if You Know Where (& When) to Look!
Skip to content

Travelers in North America might be getting queasy riding the airfare rollercoaster. There were unbelievably cheap domestic flights throughout much of the pandemic until prices skyrocketed heading into the summer. After a late summer cool-off, you might be seeing eye-popping domestic fares again as we head into the holidays.

You're not seeing things. Hopper's handy price tracker tool shows U.S. domestic airfare has been rising steadily since the late summer. As of earlier this month, average domestic flight prices were up by nearly 14% since mid-August, the data shows.

But that doesn't tell the whole story: The bargains are still out there. While airfare is going up on average, we're still finding plenty of double digit roundtrip domestic fares and some really affordable flights to some of our favorite destinations in the United States. We keep sending cheap domestic flights to our Thrifty Traveler Premium members every day, including bargain fares for travel over Christmas and New Year's Eve.

That's right: Cheap domestic flights are still out there if you know where to look. Here's what we're seeing.

So what's behind the current trends in flight prices? We explained what was going on when flight prices starting rising precipitously last spring and summer, so we owe it to you to explain what's going on now that things have stabilized.

The short answer? As always, it's all about supply and demand. The peak summer travel season is long gone – everyone's turned their sights to the holidays and spring break. Travel demand to Europe has cooled off after a summer peak, driving some record-low fares to Europe recently. But domestic travel demand is still pretty high. Airlines are taking advantage by charging as much as they can over the holidays because they know Americans will fork over the cash.

According to the online travel agency Kayak, domestic flight search volume is still riding high after the initial summer surge.

That's not unusual. Travel demand always tapers off by mid-summer as Americans have locked in their travel plans, and it usually surges again before the holidays.

But that doesn't mean the cheap flights have evaporated entirely. Sub-$100 fares like this trip to Orlando (MCO) are still out there!

Airlines are still frequently slashing prices to some of the destinations we love, leading to the always-coveted sub-$100 roundtrip airfare. You love to see it.

One more important note: If you booked domestic travel when flight prices were peaking, make sure you check your flights again to see if prices have dropped – or set a Google Flights price alert. If you're flying a major U.S. airline, you might be able to re-book at a cheaper rate, or get a travel credit for the difference in airfare if it dropped in price. I've done this to save hundreds on all kinds of Delta flights. It's worth checking your upcoming trips!

Let's get to the fun stuff. The proof. Cold hard facts. If cheap domestic flight prices are out there, prove it! 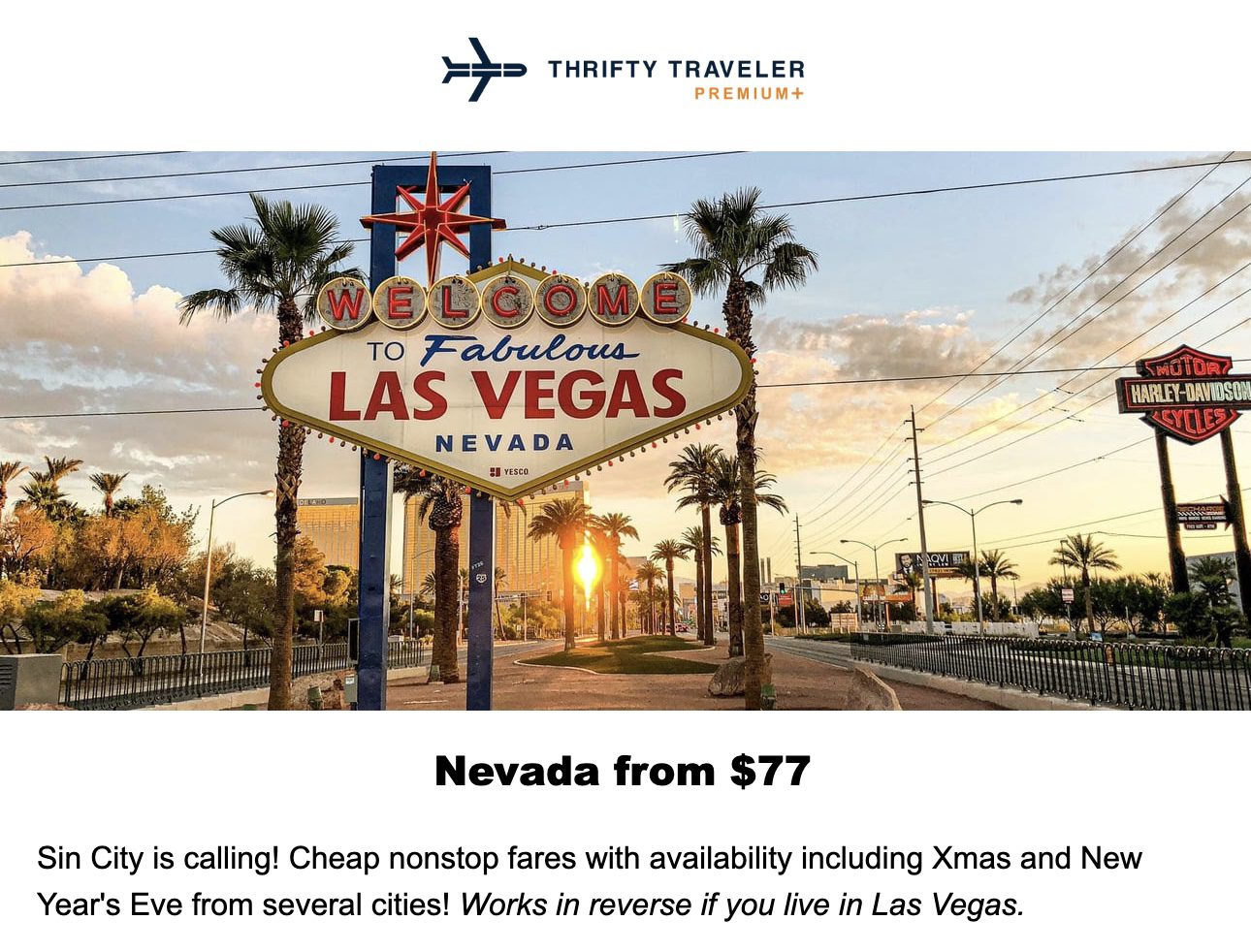 Get alerts for cheap domestic and international flights straight to your inbox with Thrifty Traveler Premium! Or sign up for exclusive access to our Big Black Friday sale!

Before prices got out of hand, Las Vegas (LAS) was a cheap flight staple as nearly every major airline flies there, creating tons of competition – and therefore dirt-cheap fares. We're here to tell you that those fares have returned. On this latest deal to Las Vegas, nearly every major airline was involved, including Alaska, American, Delta, Southwest, and United. And it even included cheap fares over Christmas and New Year's Eve!

Southwest brought the heat with the lowest fare in the bunch.

But flight prices are low from coast-to-coast, not just in the desert. Washington, D.C. is an ever-popular travel destination for people from all over the country. This latest flight deal to D.C. included dozens and dozens of U.S. cities with plenty of nonstop flights, too. 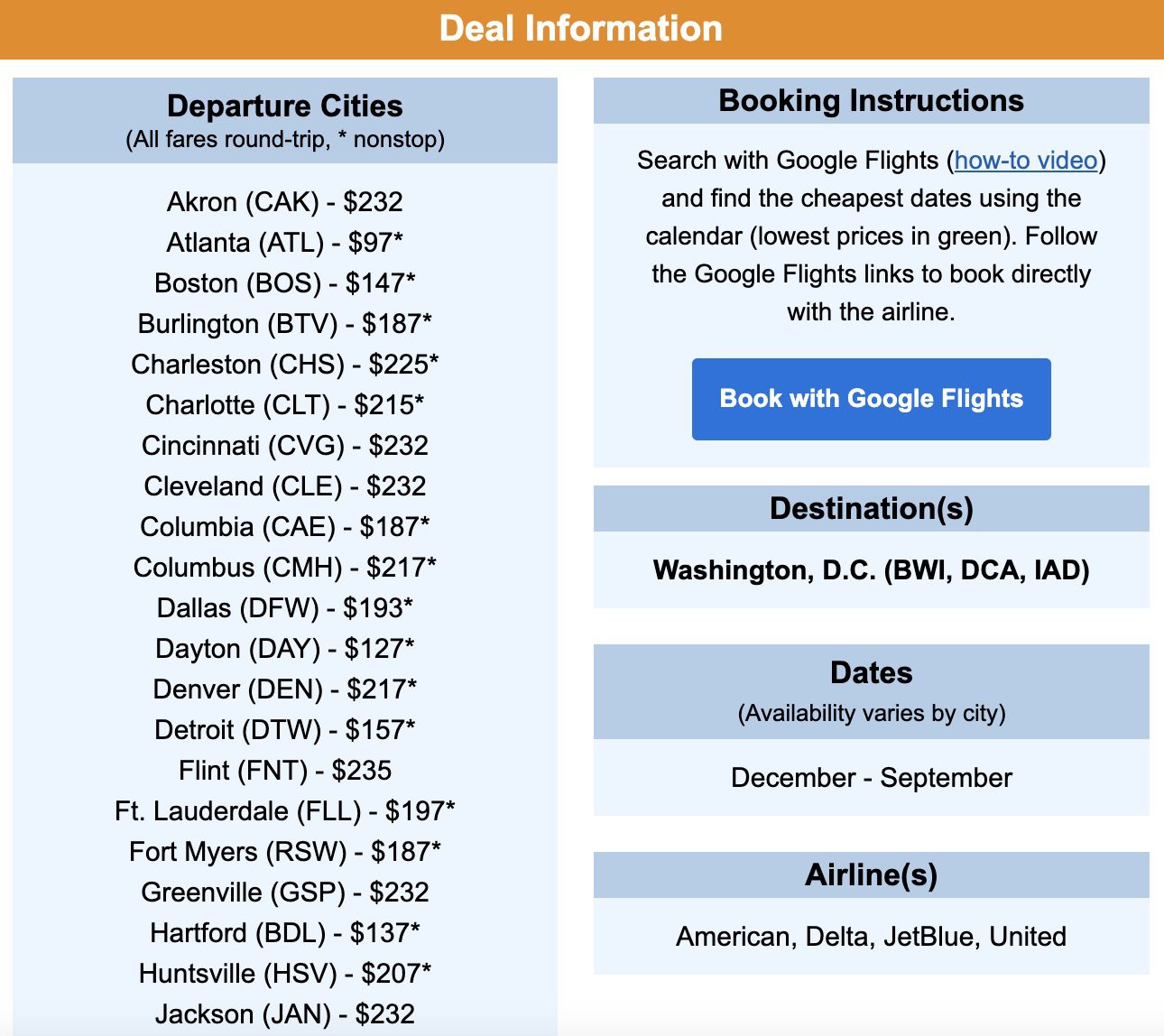 Think airfare is high? Starting at just $97 roundtrip, you could also book a trip to Boston (BOS)! This deal included tons of U.S. cities as well. Seemingly everyone can get to this classic American city for under $250 roundtrip this year or next.

We also shouldn't forget to play the hits! Everyone loves visiting Arizona. Whether you're a golfer, a hiker, a Spring Training baseball fan, or a laying-by-the-pool-with-a-cool-drink-er, the Phoenix area has something for you. Even as prices rise elsewhere, flight deals to the desert are easier to find than they have been in months. Arizona is a perennially sought-after destination with routinely cheap flights, but cheap flights to the mountain west aren't always the easiest to find. The Mountain West seemed to be firmly in the expensive flight chokehold since early spring 2022.

But with some of the fares we've found over the last two weeks, I think we can safely say that we're out of the woods. Just recently we dug out this flight deal to the Lake Tahoe area, which is possibly my favorite place in the world for a ski trip. Think about skiing some of the deepest snow on the planet and then sipping a drink on the patio in some quintessential California sunshine….ahhh.

Things are still really popping out west right now, including a flight deal that lets you see two of the best National Parks on the planet in one cheap roundtrip flight. 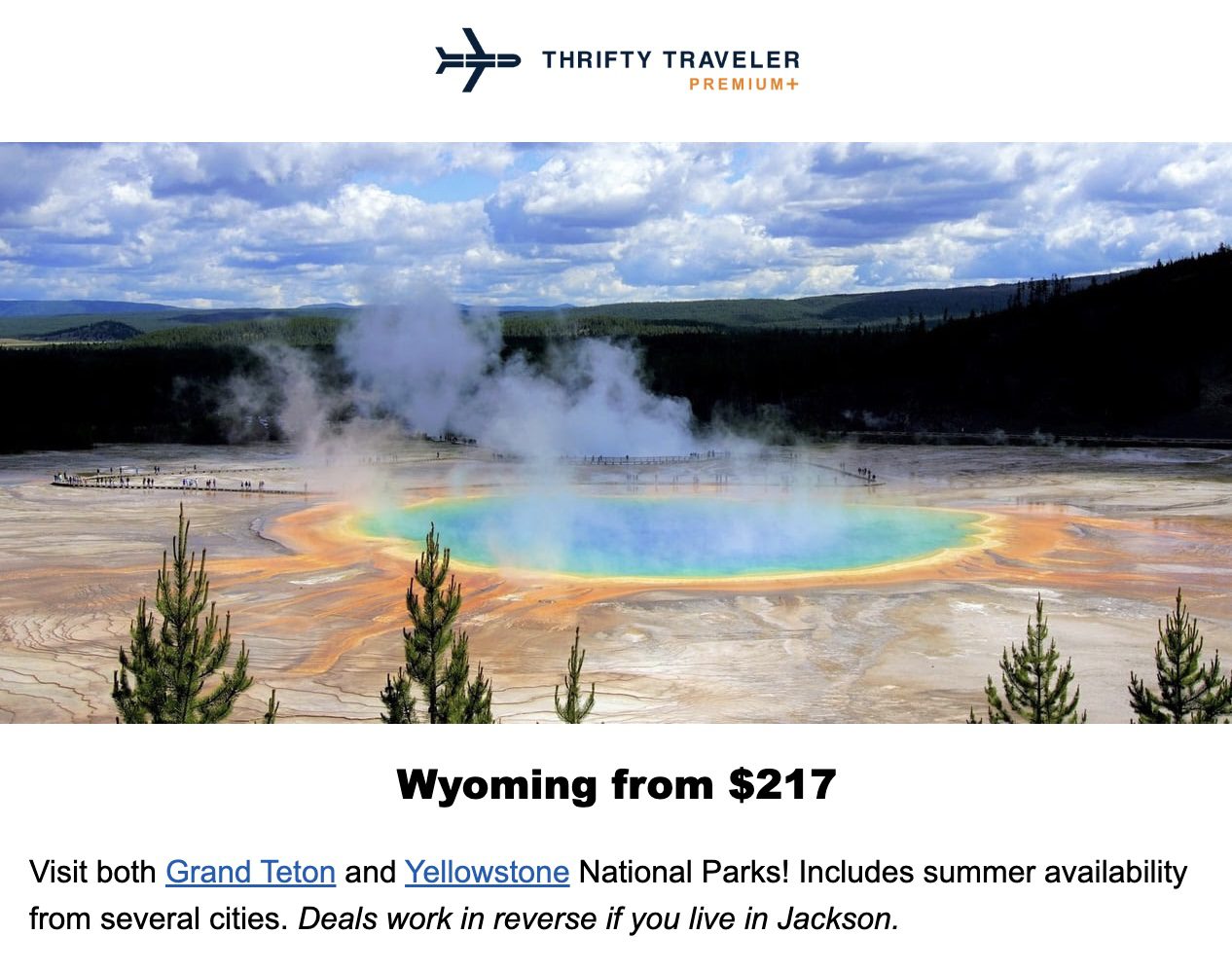 And while a break in the dam for cheap flights to the Mountain West was a welcome sight, we can't forget about some other favorites, too. Let's get some sun, shall we? It's time to head to Southern California for less. 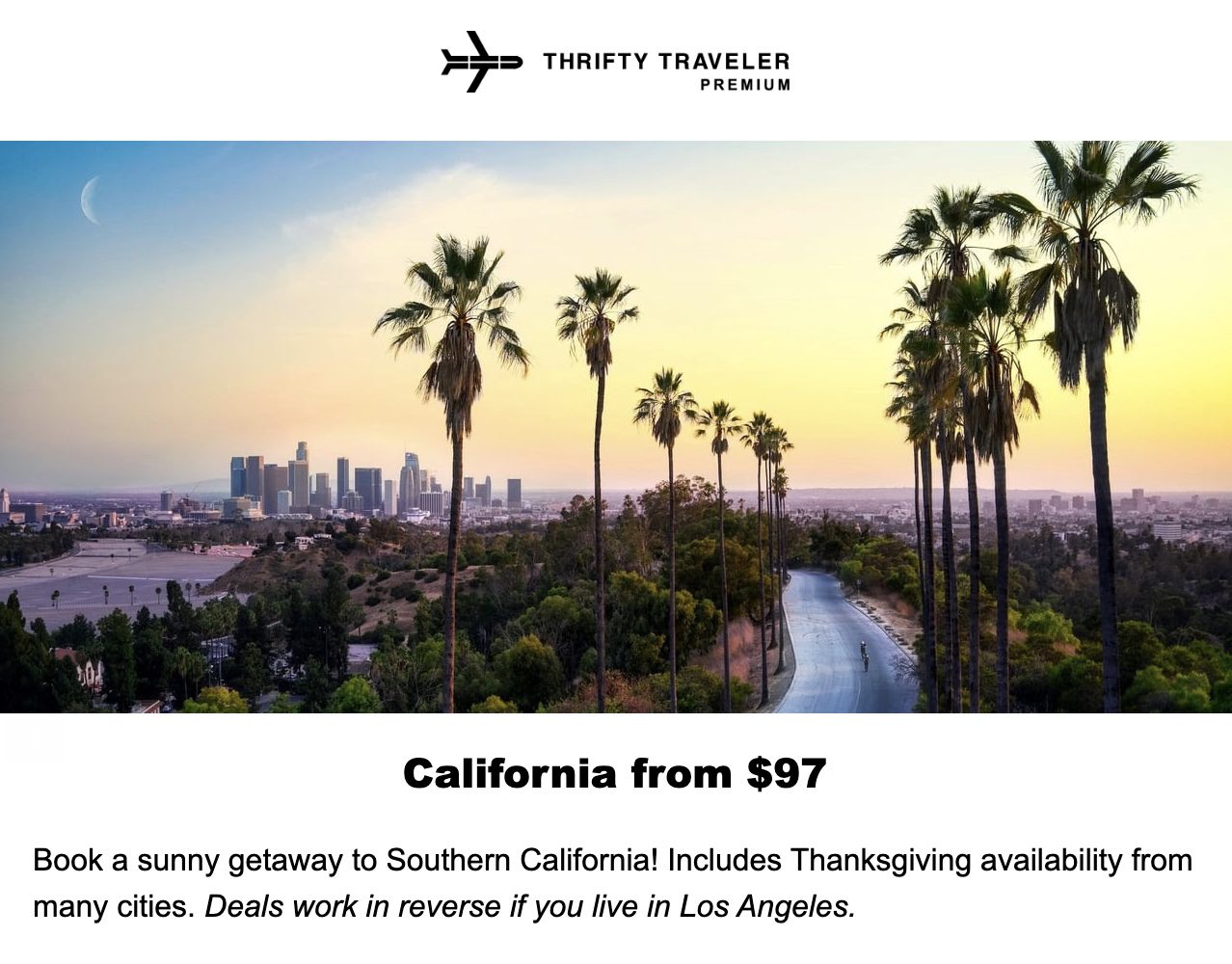 Cheap flights to California were tough to find for a few months there. There were some painful fares for travelers looking to visit the region, or who wanted to book a positioning flight to the Pacific hub of Los Angeles (LAX), too.

Let's look at one last sunny locale that might be the perfect place to ditch the mainstream crowds of Florida. If the Florida panhandle wasn't on your list, we have something in common. But after sitting in an hour of traffic in an Uber to get to the beach in Southwest Florida earlier this year, a quieter, white-sand beach near Destin (VPS) sounds pretty incredible right now…

I think Florida-goers should really take a hard look at the panhandle, especially as flight prices there continue to fall. This deal was pretty popular among our Premium members, and we hope they booked a cheap trip to escape winter in 2023.

If you're seeing sky-high domestic airfare right now, you're not alone! But even though average flight prices are going up, some of the best deals we've ever seen are still out there if you know where to look.

Sub-$100 roundtrip flights in the United States are out there! And your next trip to the Mountain West, to Florida, to New York City, or to Southern California doesn't have to be expensive. Join Thrifty Traveler Premium to book cheap flights like these and save hundreds on your domestic travel this year or next.

Join the waitlist for huge savings on Premium during our upcoming Black Friday sale!