United Basic Economy: What You Need to Know & How to Beat It
Skip to content

United has the single most punitive restriction for basic economy flyers, so it pays to be hyper-vigilant about what you get and what you don't. We gave it the lowest score in our battle of basic economy that compared all three major U.S. airlines – and it wasn't particularly close.

But why is it so bad? What do you get, and what don't you get? And how can you make United basic economy a little less painful? Let's break it down.

What You Get with United Basic Economy

There's no way to spin this one: United has some of the worst basic economy fares out there of any major U.S. airline. 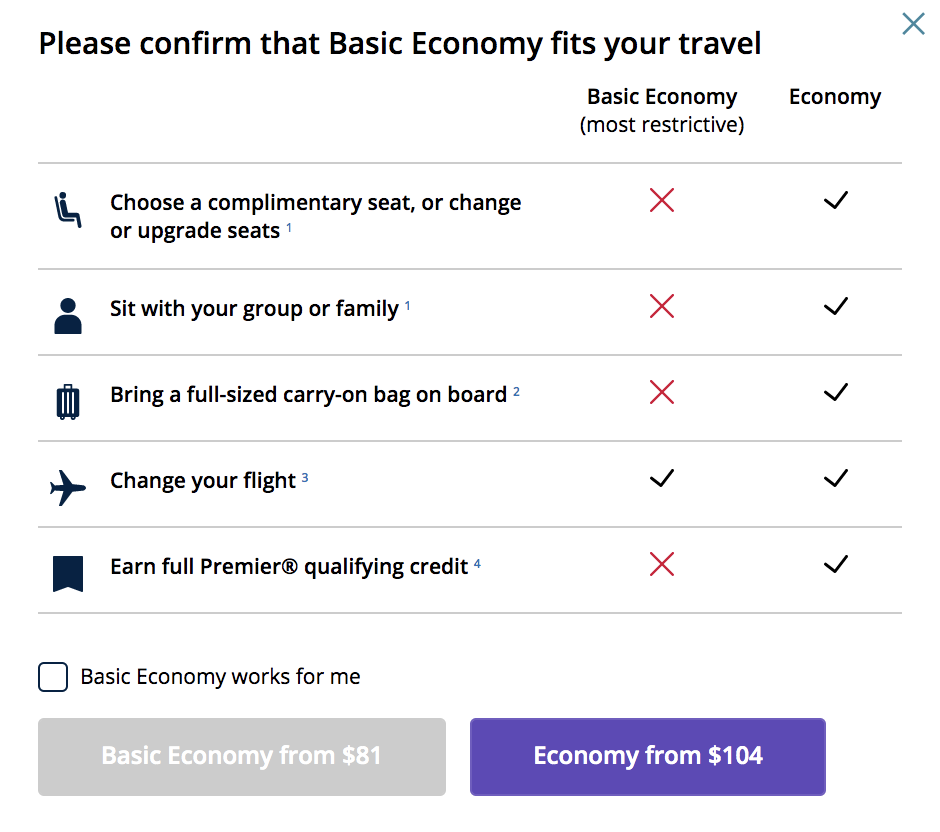 United's Basic Economy is easily the worst among the major U.S. airlines. And there are no signs that it will get any better.

Unless if you're flying to Europe or other long-haul destinations, you won't get a carry-on bag. That alone is proof that United is merely looking to force flyers to pay up for a main cabin economy fare – generally another $60 to $70 or more on a round-trip ticket.

Read more: No, You're Not Getting a Good Deal on a Basic Economy Fare

One saving grace of United basic economy? Unlike Delta basic economy, you'll still earn both redeemable United MileagePlus miles and at least some credits toward United elite status. After a brutal change in late 2021, you no longer earn either with Delta.

Still, a few things about United basic economy fares are worth highlighting even further – some good, but mostly bad.

Let's start with the bad news: No carry-ons.

Unless you're flying across the Atlantic Ocean or to another long-haul international destination, all you get is a small personal item like a backpack when flying United basic economy. And United executives say they have no plans to change this, even as both Delta and American allow carry-ons for all basic economy passengers. It's the most restrictive measure of any basic economy fare in the U.S.

And that comes with a double whammy…

No Online Check-In, Either

Because you can't bring a carry-on bag onboard, you have to finalize checking in for your flight at the airport. Yes, that's right: No online check-in when flying United basic economy. 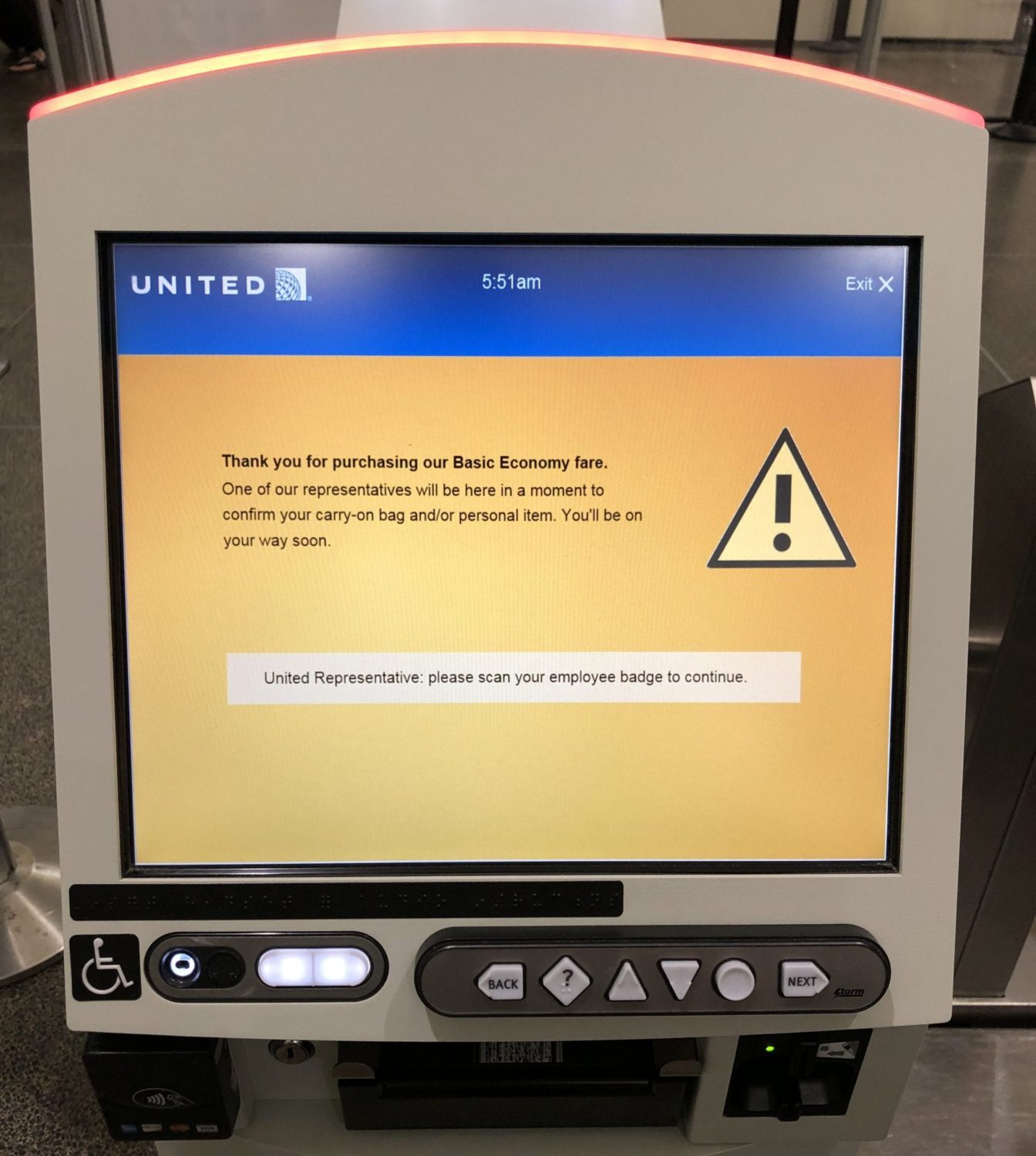 Read more about checking in online with United!

Pay Up For Seats

If there's one upside to United basic economy, it's the ability to pay for a seat assignment.

The window to pay up for seat selection opens right when you book your flight – earlier than you'll find on many airlines. And the price is often right: We've seen seat selection fees as low as $5 to $8 a seat. Generally, seats toward the back of the plane are the cheapest. And a middle seat will cost you less than an aisle or window.

Right now, United Basic Economy has been rolled out on all routes heading to the following locations:

There is currently no basic economy offering on United flights originating out of the U.S. heading to the following locations:

Any economy ticket you book on these routes will be a main cabin fare including advanced seat assignment, carry-on bag, ticket changes, and subject to upgrades for elite status members (depending on the destination).

How to Beat United Basic Economy

There are no two ways about it: Flying United Basic Economy can be a drag. Luckily, there are a few ways you can make it a little less painful.

Get Some Perks Back with a United Credit Card

The easiest way to beat some of these restrictions is by holding one of United's co-branded credit cards like the United℠ Explorer card.

Among the other benefits of the card, you'll be able to bring on carry-on luggage – as will any other travelers booked on your itinerary. You'll also get a checked bag for free, as will anyone else booked on your reservation.

Click Here to get more details on the United Explorer Card.

On paper, you don't get to select your seat with a United basic economy fare. But in practice, that's not quite true.

United sells seat selection to basic economy flyers for an additional fee. The window to pay up for a seat assignment is open from the moment you buy your ticket. Better yet, the fees are typically quite reasonable.

Just be warned: United may try to sell you a “bundle” with seat assignment. These typically aren't a good deal – you can buy it later for much cheaper.

So just click past it and proceed through checkout and you'll get the option to pay for a seat a la carte. Take a look at the seatmap for an upcoming flight from Houston-Intercontinental (IAH) to Washington, D.C.-Dulles (IAD), and you'll see that a window seat starts at just $13. A preferred seat towards the front of the cabin, meanwhile, is $27 per passenger. 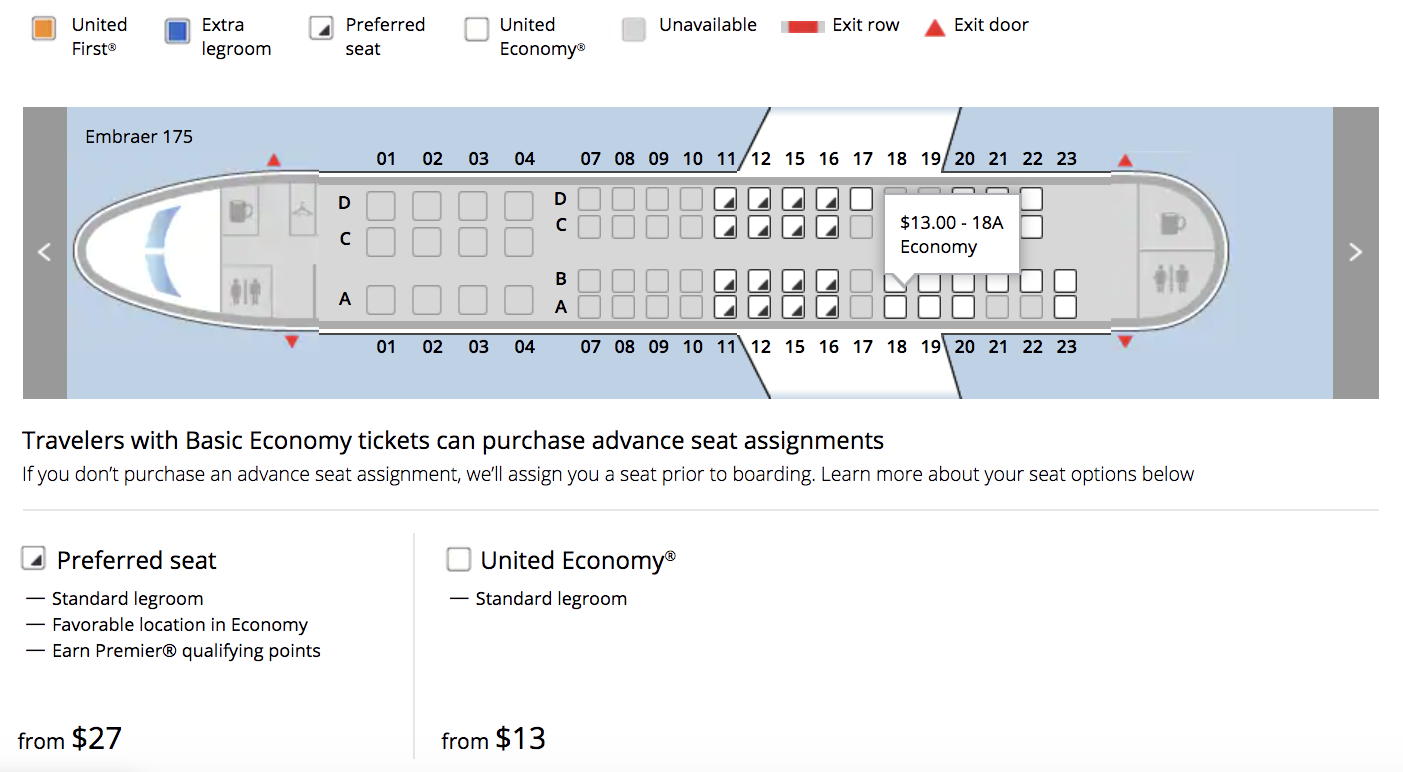 The price will vary by flight, but those rates are about average. Expect to pay $10 to $20 per seat. But keep in mind: That's a per-segment cost. So you'll have to pay double for a round-trip flight – and even more if your flight isn't nonstop.

If you want to make sure you get a certain seat, you're better off paying for an assignment right away. Not only will the number of available seats shrink as your departure approaches, but the price for a seat will likely increase, too. No matter what, you won't be able to upgrade from basic economy to an economy plus or first class seat.

And Unlike with Delta, you can't move around the cabin to get an available seat for free after the 24-hour check-in window opens when flying basic economy with United. But the ability to pay for a seat from day one is unrivaled.

That brings up an important point: You need to do the math on whether it makes sense to go for basic economy and add extra costs compared to buying a more-inclusive main cabin economy fare outright.

If a main cabin fare costs an additional $70 or more roundtrip, going for a cheaper United basic economy fare could make sense. But if that upgrade fee is just $20 – as we've seen is commonplace during the pandemic – paying up for main cabin is probably worth it.

What's the Difference Between Basic Economy and Economy on United?

The names may sound similar, but make no mistake: These two types of airfare are not the same. And too many United Airlines flyers find that out the hard way.

One major – and painful – difference is that with a United Basic Economy ticket, passengers are given a much smaller United Airlines baggage allowance. Flyers with a basic economy ticket are not permitted to put a carry-on in the overhead bin – they're limited to one small personal item. With a normal economy fare, you can bring a normal carry-on bag onboard.

One last notable difference comparing United basic economy vs economy comes with earning status with United. With a basic economy fare, you'll earn half as many credits toward MileagePlus status as you do with a normal economy ticket. And you won't be eligible for complimentary upgrades, either.

What Does United Economy Include?

United Economy is your standard airline fare, and it's typically more expensive than the basic economy fare. Here’s a summary of what United Economy includes:

What Does United Basic Economy Include?

Along with some noticeable restrictions, here’s a final quick summary of what United Basic Economy includes:

There's no doubt about it: United basic economy fares are a pain. And given how much money the airline makes on them, they're not going away anytime soon.

They're among the most restrictive fares you'll find in the skies. While every other airline allows you to bring a carry-on bag while flying basic economy, United does not. And that means you can't check in online, either.

On the plus side, seat selection fees are often more than reasonable if you don't want to get stuck in a middle seat. And carrying a United co-branded credit card can make a lot of the pain of basic economy fade away.