Whether you're planning a domestic trip, heading to Europe, or vacationing in the Caribbean, basic economy fares have become nearly unavoidable. But every airline handles these no-frills fares a bit differently, so it's time for a look at American Airlines basic economy.

Like many carriers, this is American's cheapest fare. But don't be fooled into thinking that means the airline is cutting you a deal. American, like most airlines, measures the success of its basic economy fares based on how many people pay to avoid it. That's the entire point.

But what restrictions come with flying American Airlines basic economy? What kind of baggage can you bring, when can you board, and what mileage will you earn? Keep reading.

What You Get with American Airlines Basic Economy

When American Airlines first rolled out its Basic Economy offering years back, it was incredibly restrictive.

It was so restrictive that, like United basic economy, you were not able to bring a carry-on bag on board with you, and you didn't receive an advance seat assignment.

Luckily, that changed back in 2018 when American relaxed their carry-on baggage restriction and started allowing them on Basic Economy tickets. And AA has made a handful of improvements to its basic economy fares throughout the pandemic, especially if you've got status with the airline.

Here's a current look at what you get with an AA basic economy ticket: 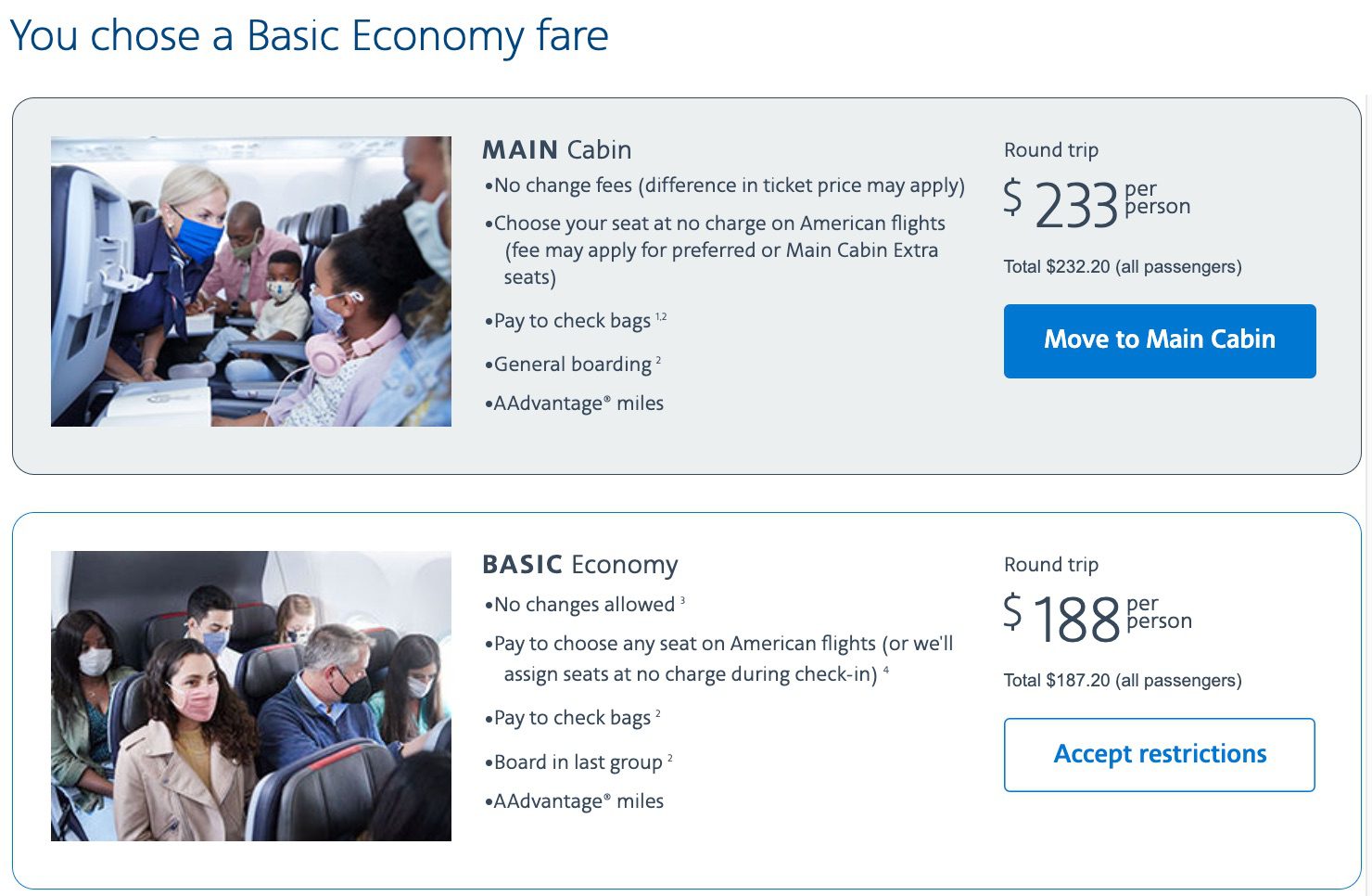 As you can see, American practically begs you to skip a basic economy fare and instead opt for a standard main cabin fare. This kind of upsell effort is common across the major airlines. And while the price tag can vary, you can typically count on paying roughly $35 each way to avoid basic economy on a domestic flight – and much more when traveling internationally. After more than a year of giving even basic economy fares the flexibility to change or cancel for a voucher, American basic economy fares cannot be changed nor canceled, period.

What Routes Have Basic Economy Fares?

You won't find basic economy on each and every AA flight – at least, not exactly.

For now, American Airlines basic economy has been rolled out on routes heading to the following locations:

On some of these longer routes like flights to Asia, American sells a hybrid version of these fares that it calls Basic Plus Bag. It's exactly what it sounds like: These fares have all the normal restrictions of basic economy, except you get your first checked bag for free. Here's an example from a flight between Los Angeles (LAX) to Tokyo-Haneda (HND). Meanwhile, there is currently no basic economy offering on American Airlines flights originating out of the U.S. heading to the following locations:

Any economy ticket you book on these routes will be a main cabin fare including advanced seat assignment, carry-on bag, ticket changes, and will be subject to upgrades for elite members (depending on the destination).

But just because basic economy fares exist on these routes doesn't mean you'll always see them. Throughout the pandemic, we've seen American Airlines stop selling its pesky basic fares on many routes – especially within the U.S. It won't last forever, but that's a win for travelers.

Basic economy is a pain no matter what airline you're flying. But flying American Airlines basic economy can be a little less painful with the right strategies – and the right cards in your wallet.

Co-branded airline credit cards can be a powerful weapon to beat basic economy on any carrier. And with American, you’ve got two options that give you identical benefits.

And unlike some other airline co-branded cards, you don’t need to actually pay for your flight with the card to get the benefit. It automatically applies once the card is attached to your AAdvantage account.

And that’s huge, as checked bags cost $30 each way for domestic flights within the U.S. The Citi AAdvantage Platinum Select World Elite Mastercard‘s annual fee of $99 is waived for the first year, which means you have a full year to take advantage of free baggage before paying the fee.

The AAdvantage Aviator Red World Elite Mastercard’s annual fee of $99 isn’t waived for the first year. But even at that price, it could pay for itself after checking bags on just two round-trip flights each year.

But if you’re living the carry-on life, you may need overhead bin space, too. And considering basic economy fares on American board in the final Group 9, there’s no guarantee you’ll get it. Both co-branded cards also move you all the way up to Group 5 even when flying basic economy.

Pay For a Seat Assignment

No one wants to get stuck in a dreaded middle seat. On paper, American Airlines basic economy could leave you stuck there, as you don't get free seat assignment.

But there are two ways you can get the seat you want flying AA basic economy. One will cost you a bit extra, while the other strategy could help you score an extra legroom seat … for free.

American allows even basic economy flyers pay extra for a seat, starting right when you book your flights. These fees will vary widely by flight, but they’re pretty reasonable: The fee for a seat typically starts at $9 or $10 for a middle seat and just a few bucks more for an aisle or window seat. Seats closer to the front of the plane will generally cost more than those at the rear.

Just beware that if your basic economy fare isn’t a nonstop flight, you’ll have to pay separately for each segment of the trip.

But don’t count on getting a better seat for free by talking to a gate agent shortly before departure – a favorite trick among frequent flyers. You still have to pay up to move to a better, empty seat before boarding. Of course, this may vary by agent. And if your flight is full, you’re out of luck.

So if you want to ensure you're not stuck between strangers, your best bet is likely to pay up for a seat assignment right when you book – or long before your flight takes off.

Or Get an Even Better Seat for Free

Feeling bold? You might be able to score an extra legroom seat for free.

Buying one of American's Main Cabin Extra seats – which typically come with an extra 3-4 inches of legroom – will generally cost you a lot more than your standard seat, at $40 or more each way. But a quirk in how American Airlines assigns these seats as its planes fills up could land you a spot there without paying a dime.

If you haven't already paid for a seat, American Airlines will automatically assign you one when you check in. And if no standard economy seats are left by the time you check in, American will put you in a Main Cabin Extra seat. See where we're going with this?

So by waiting to check in for your flight until the economy cabin is full, you can automatically be placed in a Main Cabin Extra seat for free. It's a bit of a gamble and it certainly won't work every time – only when your flight is filling up. But it's worth trying out on your next American Airlines basic economy flight.

Read more on how patience can pay off with extra legroom when flying American basic economy. 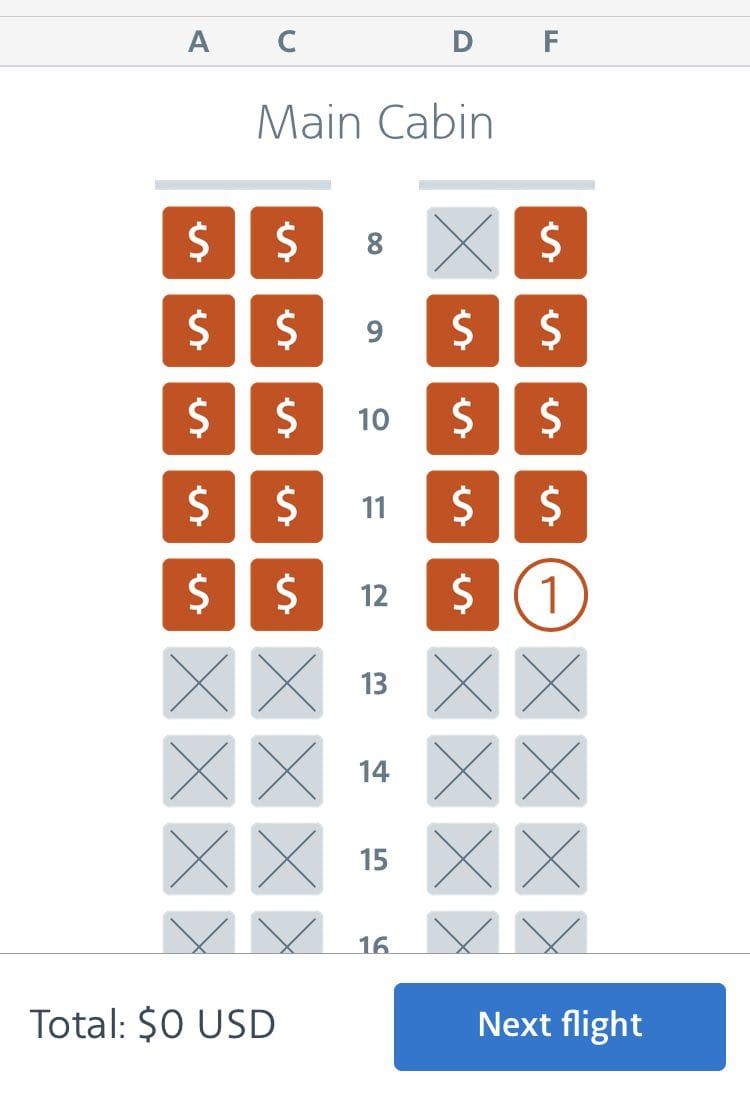 What About Sitting Next to A Child?

Basic economy fares can be the biggest pain for families traveling together. No one wants to scramble to ensure they're not separated from young children.

Fortunately, American has one of the best policies in the country when it comes to keeping families together. American's own policies clearly state that if you haven't selected seats – including with a basic economy fare – the airline will automatically assign children under 15 seats to ensure that they're seated next to at least one adult in the party.

It may seem small, but that's a big deal for American basic fares. Neither United nor Delta make a similar promise.

Read more: Can I Sit With My Child Flying Basic Economy? Questions, Answered

Basic economy has transformed the airfare world. Offering these bare-bones fares allows American to compete with budget carriers on price while pitting flyers with new restrictions – largely in hopes that they’ll pay up to upgrade.

Yes, these fares are a pain – and American Airlines is no exception. But with the right tools, credit cards, and knowledge, you can make them less painful and beat American airlines basic economy fares.