UK Reopens to Travelers Today, with Cheap Flights for 2021 & Beyond
Skip to content

At long last, the day is finally here. On Monday, the United Kingdom officially threw open its borders to vaccinated travelers from the U.S. and other countries.

Travelers will still need to provide a negative COVID-19 test to enter – and another two days after landing – to go explore London, Edinburgh, and beyond. Still, this beats the previous mandatory 10-day quarantine for American travelers.

And the good news doesn't end there. Flights to the most popular destinations across the U.K. have been cheaper than ever for trips in 2021 and 2022. Whether you're aiming for a trip to England or Scotland this year or not until next, you can get in now – and get there for less.

Today, travelers from the U.S. get the all-clear to enter the U.K. … with a few extra hoops to jump through.

The U.S. joins the UK's list of “Amber” countries allowed to enter, along with Canada, Belgium, France, Germany, Greece, Italy, Netherlands, Portugal, Spain, and Switzerland, and others. And now, fully vaccinated Americans are now allowed to freely travel to England, Scotland, Wales, and Northern Ireland without the need to quarantine.

But you'll need more than your proof of vaccination to enter. Travelers entering the UK must also provide a negative COVID-19 test result taken no more than 72 hours before arrival, then take another test two days after landing in the UK.

And yes, you still need a negative COVID-19 test to fly back home to the U.S. So while quite a few requirements are still in place, this is a big step for one of the most popular destinations to reopen.

Related: Tips to Find a COVID-19 Test Abroad Before Flying Home to the U.S.

So, what's it like once you get in? The U.K. is in what they call “Step 4” of reopening. Here's what to expect:

Read our full guide to European travel restrictions to see what it takes to get in – and what it’s like once you get there.

The U.S. State Department still warns against traveling to the U.K. right now, citing the fast-spreading Delta variant that fueled a massive outbreak earlier this summer. But cases there are trending in the right direction now.

And we've been seeing some exceptionally cheap flights to the U.K. recently, which prove you don't have to break the bank to visit.

Over the past few months, we've found some of the cheapest flight deals we've ever found to Europe. There's truly never been a cheaper time to snag a cheap flight to visit the U.K. and beyond. Many of these deals are no longer live, but we're already on the hunt for the next deal.

So let's see just how cheap flights to the U.K. – and Europe in general – have gotten lately. As low as $300 roundtrip to most European hubs, including London-Heathrow (LHR)? That's a steal. 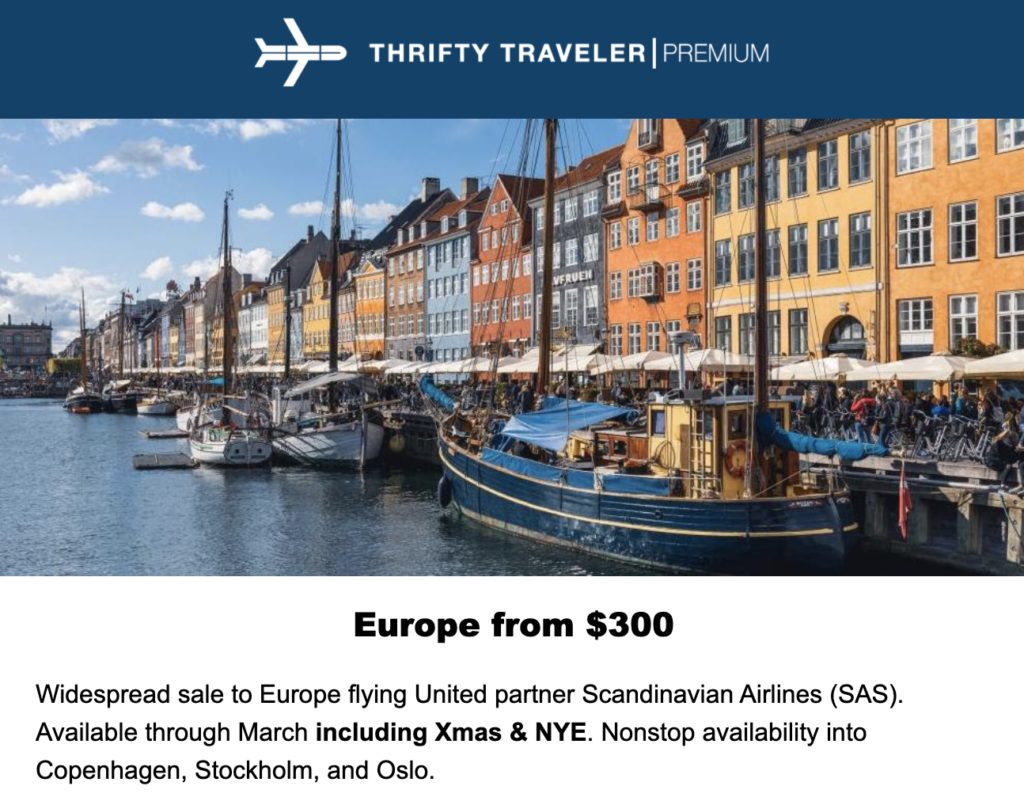 Thrifty Tip: These are the top 9 U.S. airports with cheap flights to Europe.

The widespread flight deals to multiple European cities just kept coming. We found roundtrip fares to these cities – including London – as low as $268 roundtrip: 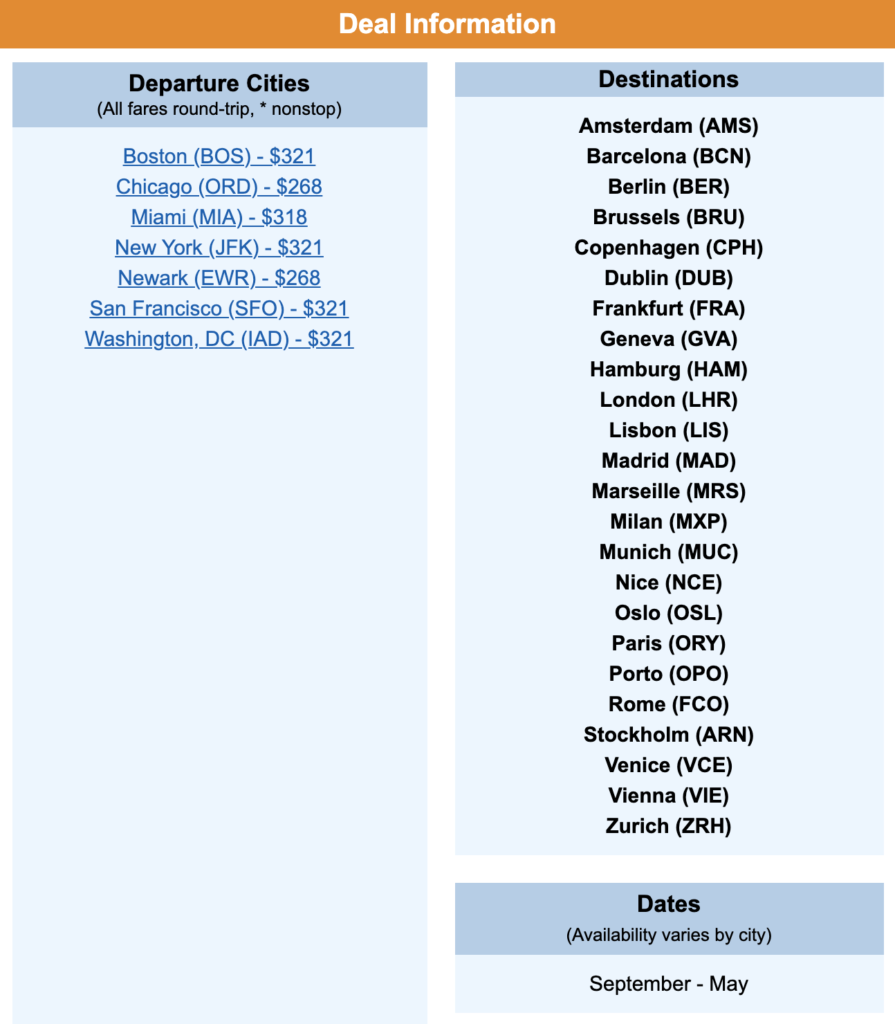 These fares were available from late summer this year through next spring! You could even spend Christmas or New Year's in Europe.

And no, these deals aren't just live from major U.S. cities! Take a look at this recent flight deal we found to Scotland from multiple airports, big and small. Want alerts when prices drop this low? Sign up for Thrifty Traveler Premium and we’ll send the deals straight to you!

Looking to cross the pond in style? There's never been a better time to snag a cheap business class flight to Europe. Airlines have been dropping prices on these luxury seats like crazy lately!

Just how cheap have flights gotten? As JetBlue finally started selling its long-awaited flights to London, we found a rare deal to London-Heathrow (LHR) in a brand new JetBlue Mint business class seat that rocked our world. This nationwide flash sale to Europe in United's business class seats were a huge hit with Thrifty Traveler Premium members. These fares would normally cost $3,000 – or more. But we found them from every U.S. city (even small regional airports) for half the price. 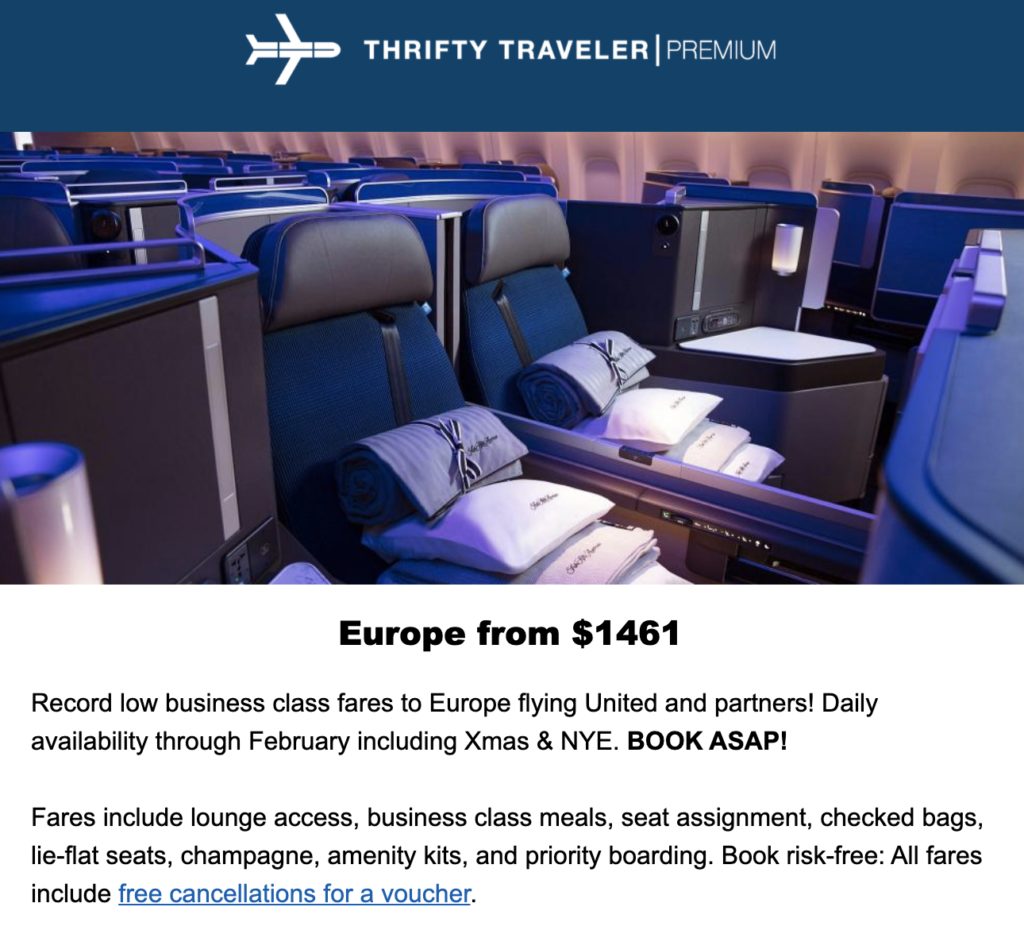 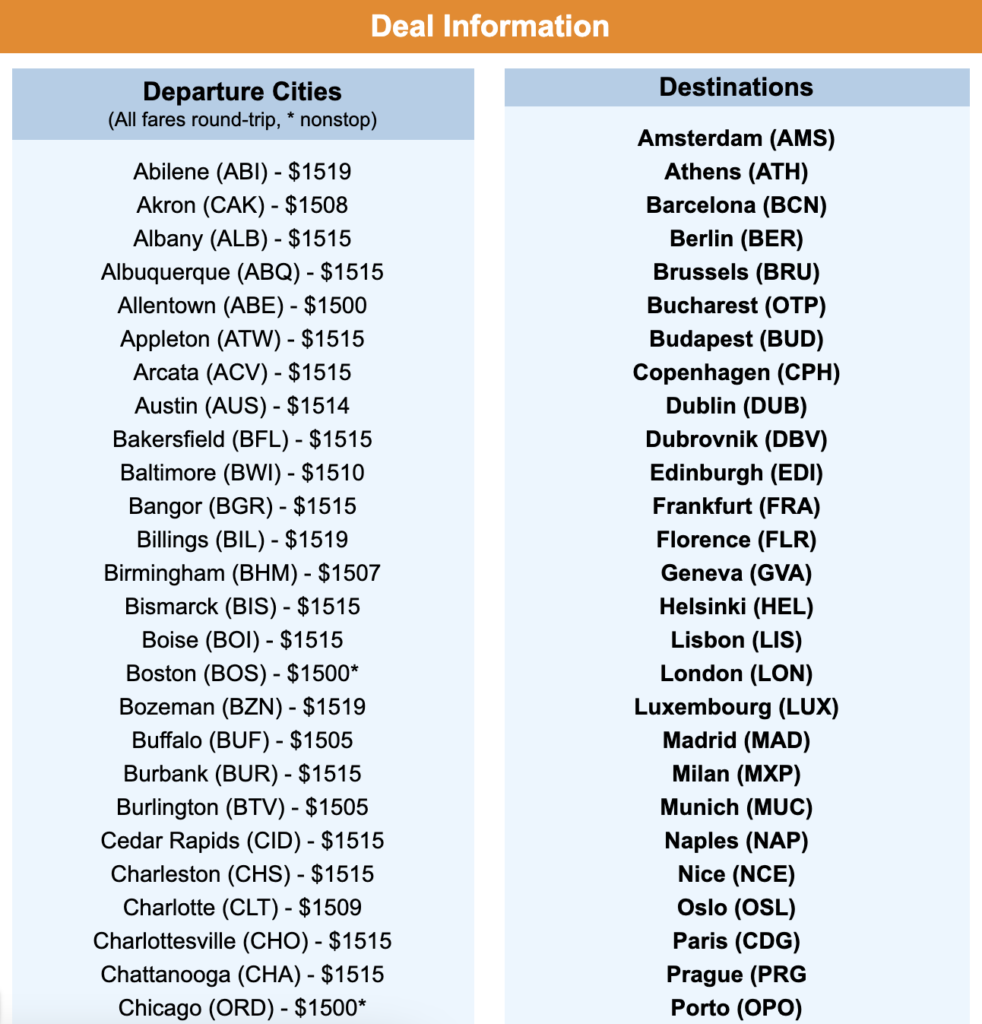 Don't miss the next deal we find to London and beyond! Get instant email alerts with Thrifty Traveler Premium.

After months of false hopes and false starts, the U.K. is officially open to vaccinated American travelers. You'll need proof of vaccination and a few COVID-19 tests to skip quarantine – plus another COVID-19 test to get back to the states. But this is the first time in more than a year that Americans have gotten the green light to head for London and beyond.

And the flight deals to get you there for less are out there, with roundtrip fares dropping as low as $268 roundtrip and business class flights at half the price.