Cheap Flights to Europe Are Back (& They're Getting Cheaper!)
Skip to content

Something is happening with Europe flight prices, and trust us: You're going to like it.

Over the last week or so, our team has dug up some fantastic fares to the best European destinations for a trip this year or next for $500 or less roundtrip – and sometimes just half that price! In just the past seven days alone, we've sent Thrifty Traveler Premium subscribers cheap flight deals to Zurich, Ireland, Greece, Belgium, Hungary, Finland, Spain, the U.K. and more – and not a single roundtrip fare over $599 in the entire bunch, either!

And some of the fares are about half that…

Sub-$300 fares to Europe are extremely rare. Sub-$300 nonstops are even more rare. Plus, the deals we're sending out depart from more than 200 airports all over North America flying Delta, American, United, and their major international partner carriers.

Let's take a spin through the continent and see just how cheap some of these destinations can get right now.

Where You Can Score Cheap Flights to Europe

We have a rule at Thrifty Traveler: It's called the Flight First Rule, and it's exactly what it sounds like.

Before you book your hotels, request time off from work, or start planning your trip, start by searching for flights. That gives you some critical flexibility to find cheap flights, as just shifting your travel dates by a day or two can save you hundreds of dollars. And it also gives you the freedom to capitalize on deals like these.

When it comes to sought-after European destinations, everyone wants to go to Greece. The same goes for the U.K. And apparently Delta wants to be the one to fly you there. This United Kingdom deal included airports all over Scotland and England, including some rare finds in the $300s. How do you like this fare from Chicago-O'Hare (ORD) for less than $400?

These prices are gone now! Get the next deal in your inbox with Thrifty Traveler Premium!

In many cases, we're seeing these cheapest fares crop up for winter – though in some cases, the lowest prices stretch all the way into the spring. For instance, we deal to the Swiss Alps during peak ski season. Spain has also been a major player in this latest round of cheap flights, with Delta deeply discounting fares for next year. Europe flights in the $300s are always a treat, but aren't always available from most airports. That changed with this deal. Look at how many airports were included in this deal! From Aberdeen, South Dakota (ABR) to Bozeman, Montana (BZN), so many U.S. airports got in on the action to Spain. It was close to 200 airports in all, which is nearly unprecedented availability overseas at ultra-low prices. Italy is another one of those European countries that is on everyone's list, which sometimes makes for expensive flights due to high demand. With demand much, much lower in the winter months, American, Delta, and United all put a bunch of Rome (FCO) fares on sale from across the U.S. From California to Maine, you could have booked these fares to Rome for less than $600 for travel this winter. Scandinavia is the kind of place that embraces winter, which is made easier by the region's immense beauty when it's covered in snow. Oslo, Norway is a perfect example of that, and cheap flights to Oslo (OSL) reared their heads once again. Fares in the $400s to Norway are exceptional, as are similar fares to Finland. If the Northern Lights are what you seek, this flight deal can get you there for nearly record low prices. If North Carolina's winters are drab and dull, go visit Scandinavia and see how people really celebrate winter!

Unlike the Norse countries, which is known to be a littttttle bit pricier, Budapest is famous for being an extremely cheap place for Americans to travel. Pair that with a cheap flight and you might not be able to afford to stay home.

Some of these fares in the $400s to Budapest are close to record lows. If you want to explore the city without the crowds and take advantage of the cheap food, drink, and lodging, book these Budapest fares. These super cheap flights are great and all, but wouldn't it be nice to travel in a little bit of comfort over to Europe and back for the, too? And for the price you typically pay for economy? Enter Delta Premium Select. This Premium Select deal from Delta we unearthed last week included a bunch of fantastic European cities for winter travel, including Copenhagen (CPH). Copenhagen would be an amazing place to take in a Christmas market and polish off a few Danishes during the chillier months, don't you think?

And at this price, a bit of additional comfort has never been cheaper. Just because it's budget travel doesn't mean it can't be comfortable! This Premium Select deal was just the latest sub-$1,000 deal on premium economy seats we sent to Thrifty Traveler Premium+ members.

Business Class Flights to Europe, Too!

In just the last few weeks, we've sent Thrifty Traveler Premium+ members a really solid grouping of business class deals flying United Airlines, Aer Lingus, and even Singapore Airlines (yes, really). Whether you're looking to pay cash or use some points and miles, there's a path to get to Europe in comfort. While cash prices are typically high for these routes and award availability can be tough, we keep finding great deals to fly to Europe up front.

Let's start with a great chance to fly United Polaris business class to London. This phenomenal deal even included some Christmas and New Year's availability from both Chicago and New York City. And you could book it for as low as 45,000 miles each way using Turkish Miles & Smiles! 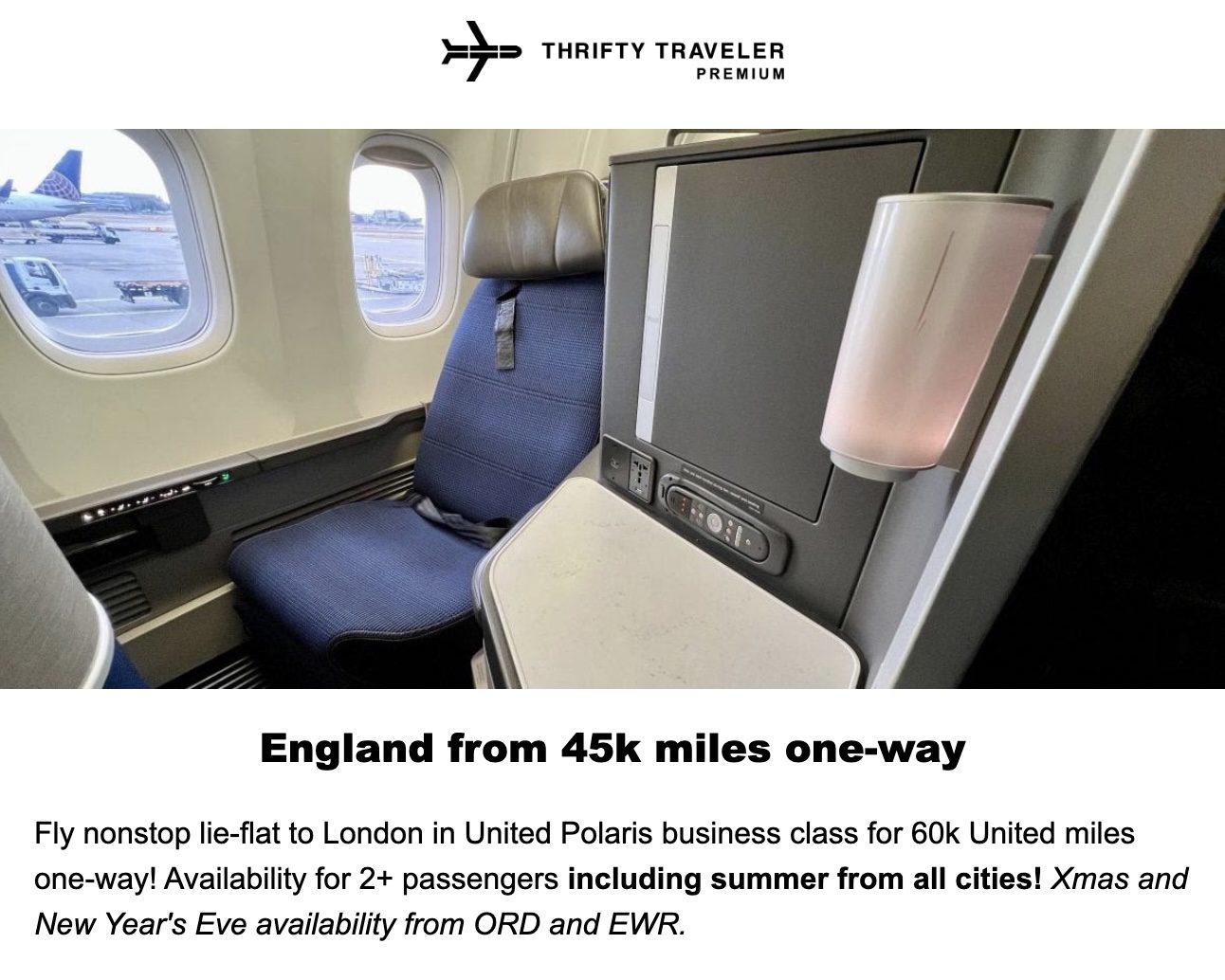 Thrifty Traveler Premium+ members get award alerts like this one, too! Just 46,000 points apiece to fly business class to Europe? With wide-open availability for two or more passengers all the way through spring 2023? You can't beat that.

The same wide-open availability goes for these American and British Airways business class seats to Frankfurt! Imagine waking up in Germany after a hearty night's sleep in one of these pods? It would make all the difference. Bear with me on this next one…Singapore Airlines business class to Europe. Singapore operates two awesome fifth-freedom routes from the U.S. to Europe: One from Houston-Intercontinental (IAH) to Manchester (MAN) and another straight from New York City (JFK) to Frankfurt (FRA). And earlier this month, we found some incredible award space to fly both routes … including next summer! There are some amazingly cheap flights to Europe right now and you could get the deal of a lifetime if you know where to look.

Our flight deal analysts at Thrifty Traveler are finding some of the cheapest Europe flights we've ever seen and send them straight to the inboxes of Thrifty Traveler Premium members. Make sure you're ready for the next one!