Each and every month, we look back on the hottest flight deals of the month. This past month has felt like a year.

The spread of coronavirus has flipped the travel industry upside down. In response, we’ve made some drastic changes to the way we search for and share flight deals: We only publish cheap flights for travel in August and onwards. In the meantime, we’re asking you all to stay home now and travel later.

So it may seem ironic, but this may be the best time to book flights for future travel. And that’s due in large part to some of the cheapest flights we’ve ever found to many countries across the globe. Each day brings half-off fares to tropical destinations, mistake fares to bucket list cities, and hundreds off typically expensive flights.

If you’re feeling uneasy about booking future travel, most major airlines are offering fee-free changes and cancellations for any flight booked in the next few weeks. That means you can book a great deal now for a trip this summer, fall, or next winter, then change or cancel (for a voucher) as the situation unfolds.

Below, you’ll see just a few of the craziest flight deals we found over the last month. Many of these international flight deals are already gone. But if you don’t want to miss out on the next ones we find.

Here’s a taste of just how cheap things have gotten for international flights based on the 90+ deals we found in the past month. Which of these deals has you dreaming of your next adventure?

We can’t talk about flight deals without putting this mistake fare at the top of the list: nonstop flights from New York, LA, and Miami to Santiago, Chile for just $200! Best of all, it was available through the summer and fall – including Thanksgiving!

Typical nonstop fares to Chile average around $1,300, so Premium members who booked saved an average of $1,000. This deal was so good, Thrifty Traveler co-founders Nick and Jared booked this as well!

That wasn’t the only shocking fare to South America. We couldn’t believe our eyes when we found nonstop flights from Fort Lauderdale (FLL) to Lima, Peru (LIM) for $131 – nonstop and roundtrip. You can hardly get to Chicago for that price!

Thrifty Tip: Don’t live in Florida? For unreal fares like this, you could have booked a cheap positioning flight to take advantage of this deal.

Feel like flying in style? We found the cheapest business class fares we’ve seen on routes to South America in over two years! You could fly in a lie-flat seat to Mexico City (MEX), Buenos Aires (EZE), or Santiago de Chile (SCL) from as low as $570 roundtrip. These fares were available July through February 2021, with plenty of peak summer availability!

While our Premium service focuses on international flight deals, we do also send alerts for cheap fares to Hawaii and Key West. And we had some fares that really wowed us this month!

There’s nothing better than a nationwide flash sale to Hawaii – especially when cheap flights are available from even the smallest regional airports. There were deals close to just $300 round-trip from Minneapolis-St. Paul (MSP) and elsewhere in the Midwest. All fares were under $400 roundtrip, including:

The tropical U.S. fun didn’t stop there. We found another nationwide flash sale to Key West (EYW), with fares under $199 roundtrip from more than 100 airports nationwide! And like all other fares we send to our Premium members, these fares are changeable or cancelable fee-free.

There are some destinations that it’s just flat-out hard to get to for cheap. But if you were booking this past month, that changed – we saw airfare slashed on some of the most sought-after destinations in the world.

Those of you with New Zealand on your bucket list know it can easily cost $1,200 or more. Yet we found fares from several U.S. airports to Auckland (AKL) from just $542 roundtrip! These fares were available through December – the start of peak summer in NZ. 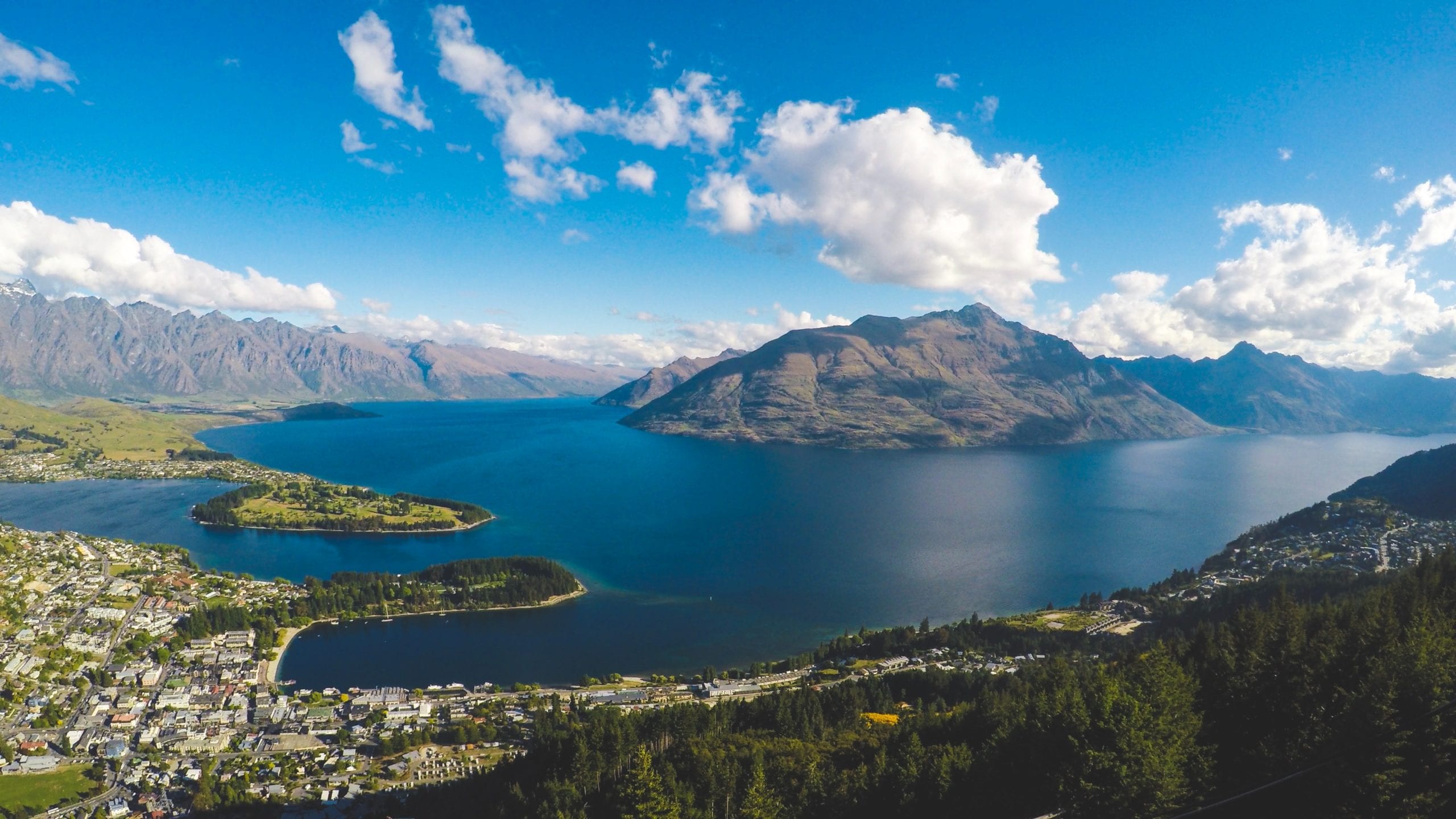 Are the Galápagos Islands on your wish list? We found an insane flight deal from New York City (JFK) all the way out to the Galápagos for $481. Those flights are typically $1,100 or more! 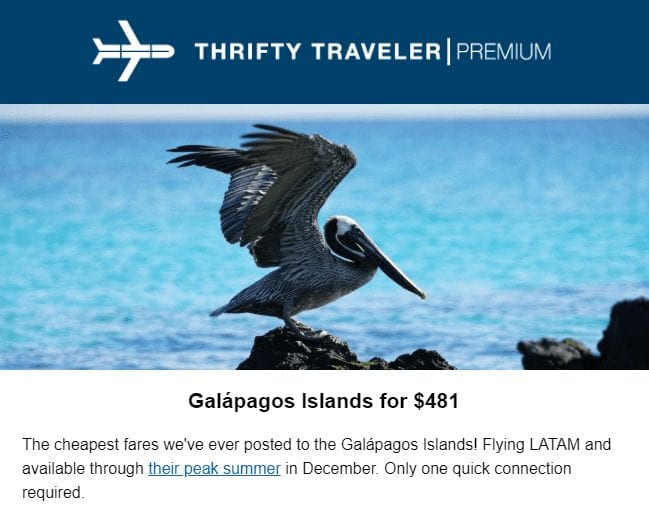 Trying to pull off that trip to Japan late this year without breaking the bank? We’ve been finding rock-bottom pricing on flights from several U.S. cities to Japan, including many under $400 round-trip! We were ecstatic to hear from Premium members who booked Minneapolis-St. Paul (MSP) to Tokyo-Haneda (HND) for just over $300, even for New Year’s!

Pining for a dose of sunshine on a quiet beach? Us, too. With rock-bottom fares to the best tropical destinations, you can plan your future getaway for less.

We’re still picking our jaws up off the floor on these insane nonstop fares to Puerto Rico for under $100 roundtrip! Flights from a handful of U.S. cities were as low as $71, while we found fares from 25 other cities for under $200. 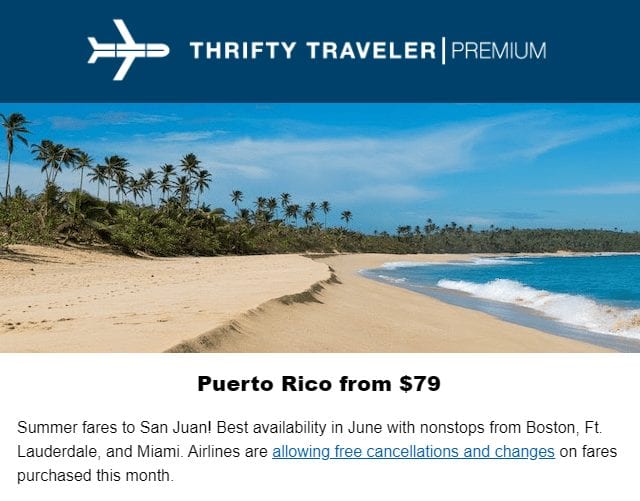 But the tropical getaway options didn’t stop there. Here are just a few examples of deals we’ve found to tropical destinations from nearly every U.S. airport:

Want in on this flight deal madness? We don’t blame you.

Rest assured, our team is keeping you up-to-date on all things travel. We’re only sharing flight deals available for July through March 2021 – and only fares that can be changed or canceled fee-free anytime. You’ll find all the information you need linked in every Premium flight deal email we send. 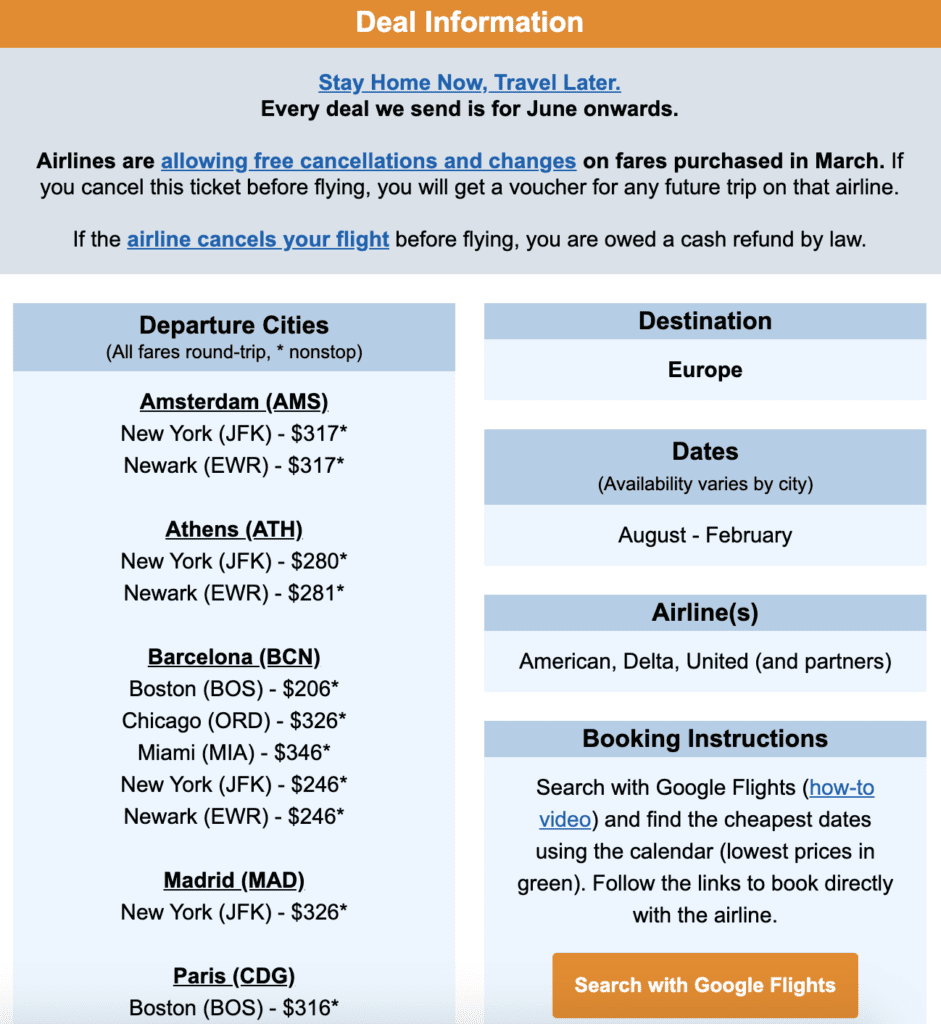 If you’re not ready to give up on travel this summer, fall, or winter and want to save up to 90% on airfare, sign up for Thrifty Traveler Premium and get instant notification of the international flight deals we find. Let’s book some future travel!