Warm Up With Cheap Flights to Hawaii: Under $200 Roundtrip (or 19K SkyMiles!)
Skip to content

Everyone wants to go to Hawaii, but too many travelers think it's too expensive to get there. We're here to prove you wrong.

Get this: We've found and sent Thrifty Traveler Premium several alerts in just the last few weeks for cheap flights to Hawaii under $400 roundtrip … and sometimes less than $200! That includes sub-$200 fares from the West Coast, a recent Delta SkyMiles flash sale from dozens of cities as low as 19,000 SkyMiles roundtrip, and coveted nonstop flights from as far away as Minneapolis-St. Paul (MSP) for just 45,000 points … or less!

Earlier this year, we were dealing with airfare rising nationwide, but the landscape is changing. Some of these recent dirt-cheap fares to Hawaii prove it. Trips to Hawaii are back in full swing without any COVID-19 vaccination or testing requirements in place for travelers. Hawaii is always a tourist magnet, and the pandemic hasn't changed that – in fact, many locals have been vocal about overtourism in the months after the pandemic. But if you're set on going to Hawaii, what has changed is how cheap it is to get there.

So what else are we seeing, flight-wise? And why does it stand out so much? We're so glad you asked.

How & Where to Find Hawaii Flight Deals

Getting a cheap flight to Hawaii is never a sure thing. Paying $600 to $800 or more per ticket can be the norm, and travelers can go months without seeing even a halfway decent deal to the islands.

But that has changed in a big way: The flight deals and fare wars to Hawaii are red-hot and frequent right now. In the last few weeks alone, we've found and sent Thrifty Traveler Premium members several flight deals from airports nationwide under $500 round-trip or much less – all for a trip in 2023.

Just a few weeks ago, we found stunningly low fares to Hawaii from airports all over the country, including the Midwest and the East Coast – as low as just $316 roundtrip! But it gets even cheaper. Before that, we found some crazy low fares from the Western U.S. to Hawaii and back starting at just $253!

Get cheap flights to Hawaii like this one in your inbox with Thrifty Traveler Premium!

While the West Coast will almost always benefit from the absolute cheapest fares, the flight deal love has spread beyond California and Washington. We've found fares from all the major U.S. airlines under $400 roundtrip from cities across the country. That's more than $300 off normal prices! We've seen one-stop flights to Honolulu (HNL), Maui (OGG), Kauai (LIH), and The Big Island (KOA) nationwide at half-off or more. Now all you have to do is pick the best island to visit in Hawaii for your cheap trip.

But many airlines and airports offer nonstop flights to Hawaii, too. Time it right with a great deal, and you can score those flights for half-off normal prices like these. 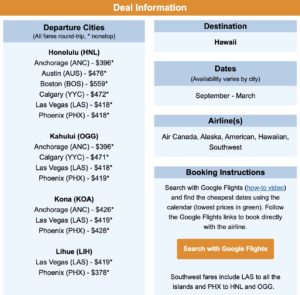 No matter where you live, you shouldn't resign yourself to paying $800-plus to get to Hawaii. That includes our hometown airport Minneapolis-St. Paul (MSP), where we unearthed this incredible deal flying Delta's nonstop to Honolulu (HNL) and onward to any neighboring island starting at just $328 – a crazy good deal!

But that's not even the cheapest Delta fare we found from Minnesota. We dug up this one a few months back for a trip in 2023: You cannot beat a $294 Delta fare to Maui.

No, you're not seeing things: It can get even cheaper. The airline fare wars began, with American Airlines targeting the Delta hub with a crazy low fare of its own. 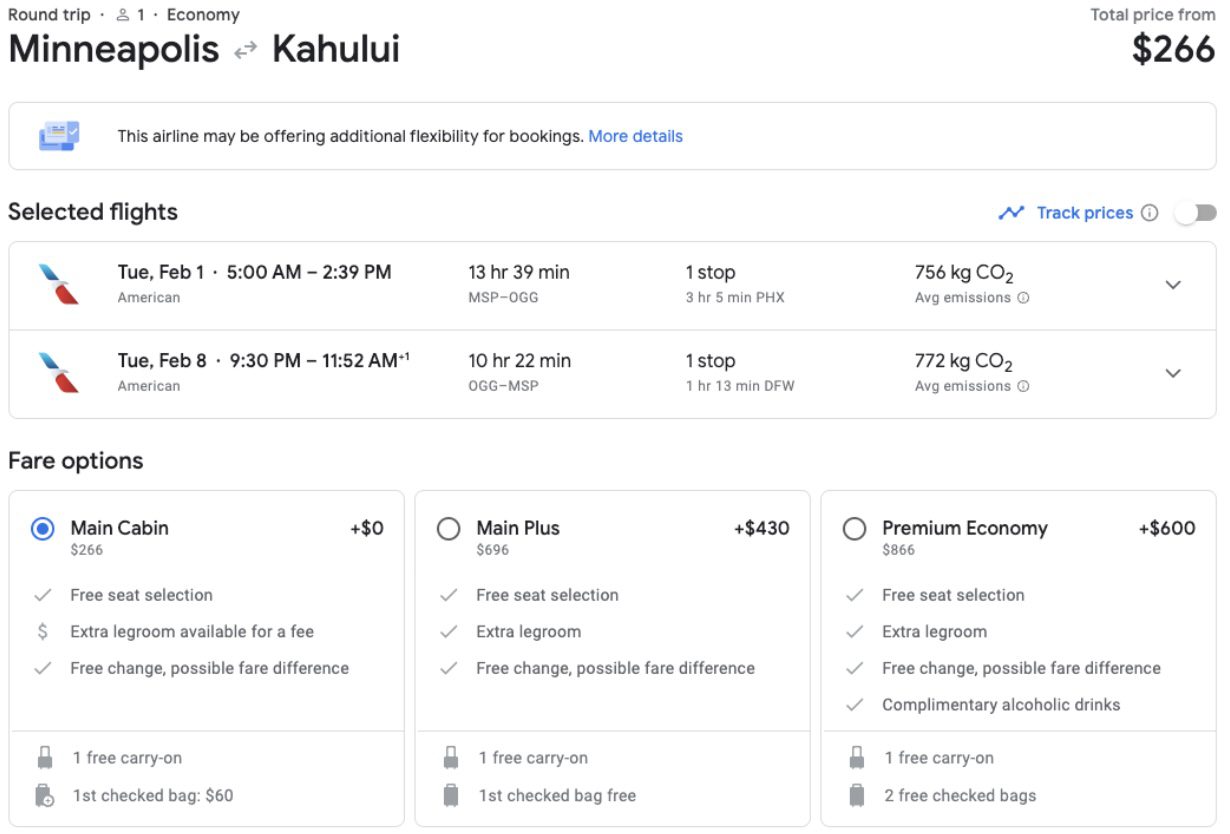 One of the secrets behind why we are finding so many low fares to Hawaii is because of a relative newcomer to the Hawaii flight game: Southwest Airlines. The quirky carrier has long offered cheap flights around the mainland. But they've upped their presence in Hawaii since launching service back in 2019, it's led to even more great deals. That deal with flights under $300 included tons of cities with Southwest service – including some rare cheap fares on longer, nonstop flights from Las Vegas (LAS) and Phoenix (PHX).

The hotter the deal, the shorter it lasts! This deal is no longer live, but you can get the next great deal we find with Thrifty Traveler Premium!

Use Points & Miles to Get to Hawaii

Why pay cash when you can use your points and miles to get to Hawaii instead?

On top of cheap cash flights, we've been finding some exceptional award deals to these islands and instantly alerting our Thrifty Traveler Premium+ members. Yes, our Premium+ members get award alerts to use their points and miles on top of all those cheap cash fares, too.

Flying to Hawaii on Southwest would typically run you 30,000 Southwest Rapid Rewards points. A flash sale a few months back could get you there for just 13,000 points total! 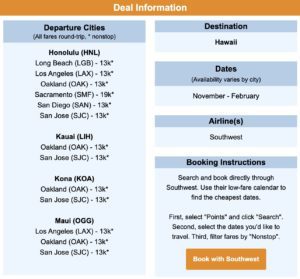 Don't have Southwest points? You could easily get them with a card like the Chase Sapphire Preferred® Card. Earn that 60,000-point bonus after spending $4,000 within three months, then instantly transfer your Chase points to your Southwest account. And remember: Every Southwest fare includes two free checked bags! Pack as many swimsuit and flip flop combos as you'd like.

Prefer to fly Delta to Hawaii? The SkyMiles award rates can be astronomical, but there's a great hack to get you on a Delta plane to the islands for less. Only Thrifty Traveler Premium+ members got this deal alert with details on how to book. This is how you level up your thrifty travels: Rather than pay 80,000 SkyMiles or more, wait for a Delta SkyMiles flash sale like this one and book flights as cheap as 19,000 SkyMiles roundtrip. 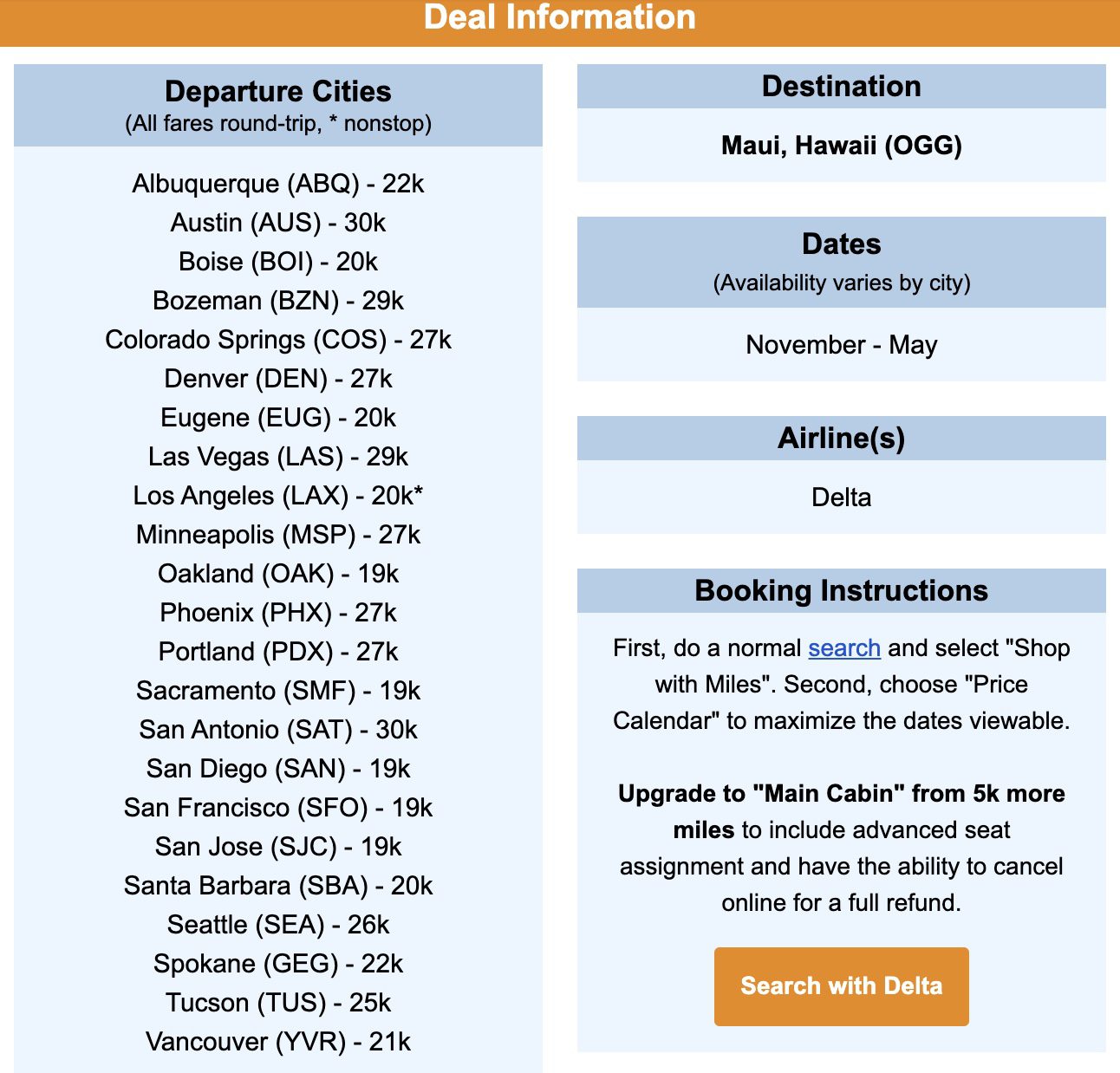 Looking for another points and miles option? Learn how to do it for 15,000 miles roundtrip using miles from Turkish Airlines!

There's another awesome way to book Delta flights to Hawaii using points and miles, and you won't need any SkyMiles to do it. Whether you've got points from Chase, Amex, Capital One, or Citi, you could be set… 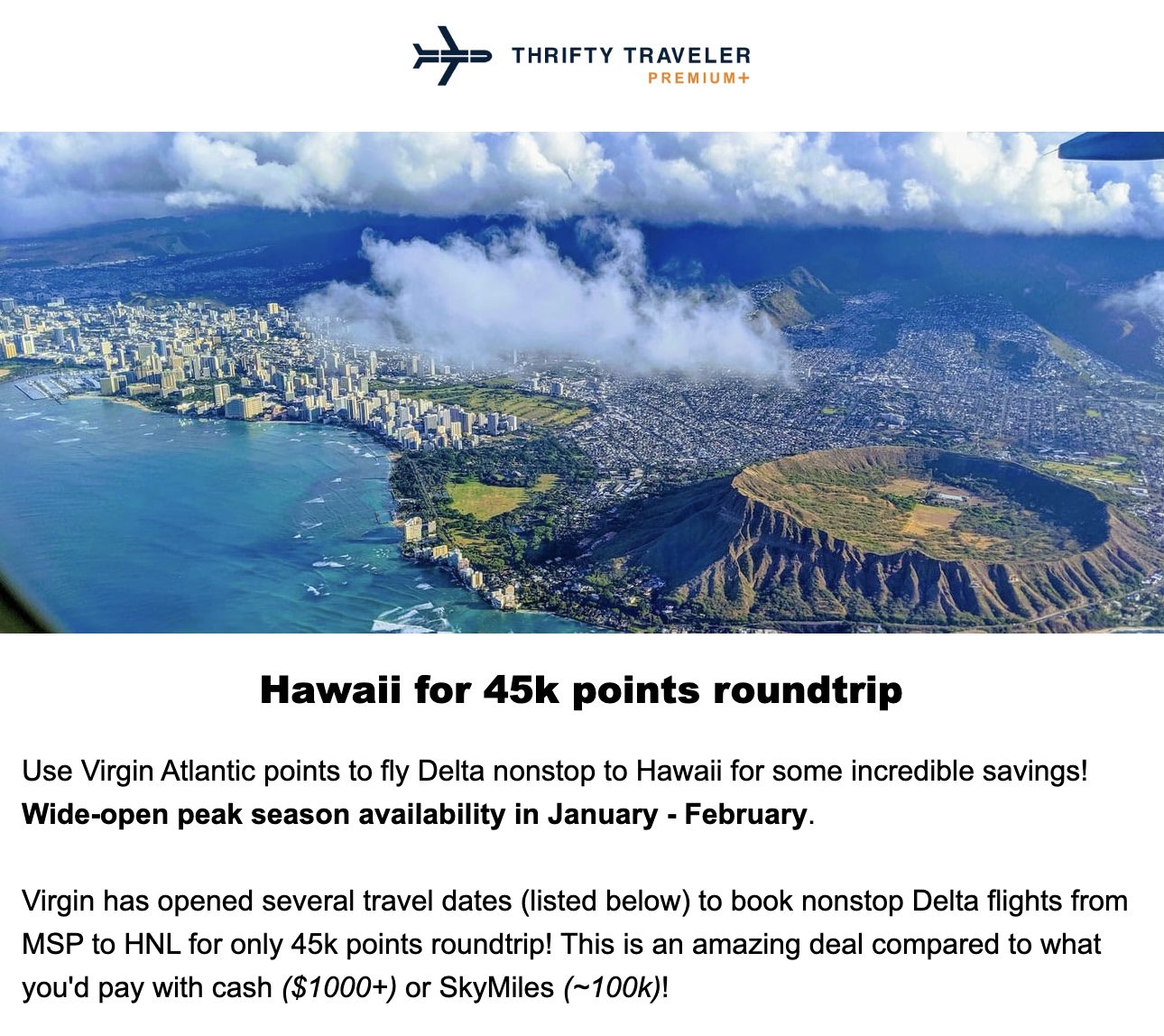 That's right: Transfer your credit card points to Virgin Atlantic and you could book the nonstop Delta flights from Minneapolis-St. Paul (MSP), Salt Lake City (SLC), and Seattle (SEA) for as little as 30,000 points roundtrip! We're not exaggerating saying that these flights are routinely more than $1,000 in cash or around 100,000 Delta SkyMiles apiece. 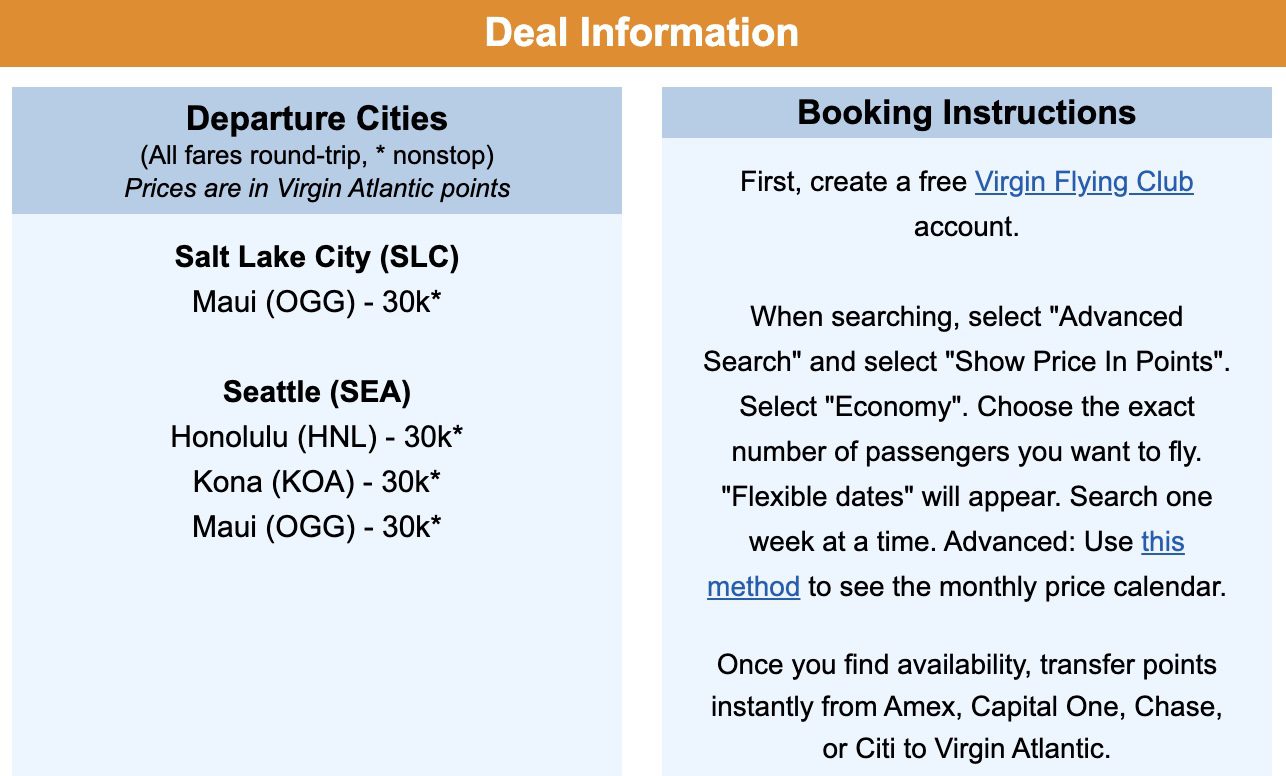 This crafty way to book Hawaii flights could save you tens of thousands of points and up to $1,000 or more! And our Premium+ members got the first crack at the award space as soon as we found it last month.

Hawaii flights don't have to be expensive.

Even as flight prices neared record highs over the last year or so, airlines keep slashing flight prices to Hawaii for 2023 and beyond. This trend has built up for months, and we hope (and think) it will continue. The savings can be enormous.

And that's your chance to capitalize: Booking one of these Thrifty Traveler Premium+ flight deals is the difference between paying $800-plus for your next trip to Hawaii … or less than half that.

The pandemic triggered a flood of lower prices for flights to Hawaii, but many of them have stuck around. This guide is all about those recent deals.

But when it comes to finding cheap flights, it won't always be this easy. While you might find that airlines are currently slashing prices, there are some general tips and tricks to keep in mind when it comes time to book the cheapest flights to Hawaii down the line.

How do I find cheap flights to Hawaii?

We'll update this post with new deals and updates about cheap flights to Hawaii. It's a hotspot for travelers, and we're constantly on the hunt.

But if you always want to be up to date on flight deals for Hawaii and other bucket list destinations the moment they pop up, we highly recommend signing up for Thrifty Traveler Premium+! Premium+ members get all the best flight deals to Hawaii – you'll only see a fraction of them here on Thriftytraveler.com and other flight deal websites.

What is the cheapest airline to fly to Hawaii?

Looking for the best airline to fly to Hawaii on a budget? We regularly see affordable prices with direct flights to Hawaii on Hawaiian Airlines, Alaska Airlines, Delta Air Lines, American Airlines, Southwest Airlines, United Airlines, and WestJet – if you live in Canada, of course.

When is the best time to book a flight to Hawaii?

We always recommend booking your flights at least three to six months before you plan to travel – especially if your travel dates are flexible.

But as with all things in finding cheap flights, the key to getting a great deal on flights to Hawaii is simple: You may need to wait for a great price to come to you, then book on the cheapest dates. Flexibility is the key to getting discounted tickets.

What is the cheapest time of year to fly to Hawaii?

It depends: A great flight to Hawaii can pop up for a trip at any time of the year.

But many find that it's cheapest to fly Hawaii in January, February, April, and September through November. During the holidays and the peak travel months of June and December, you're far more likely to encounter higher prices, so it could be worth avoiding a trip over those times.

Are there Hawaii travel restrictions currently due to COVID-19?

For many months, Hawaii required a negative test for anyone coming to visit. Then, it exempted fully vaccinated visitors from testing requirements.

But in late March 2022, Hawaii dropped all travel restrictions. That means getting into the Hawaiian islands is much like it was back in 2019.

When is the best time to visit Hawaii?

If getting the cheapest flight possible to get to Hawaii is your end goal, then you might not be worrying too much about the best time to visit Hawaii – it's Hawaii, after all. However, if you're evaluating various options based on the cheapest flights to Hawaii that you've found, here are some factors to keep in mind: