Want to get to Europe in style? Look no farther.

The Spanish airline Iberia is one of the best-kept secrets for flying to Europe in business class. After one of the strangest airline promotions in recent memory, I got the chance to test out Iberia business class for myself on the flight from Chicago-O’Hare (ORD) to Madrid (MAD). So what’s the seat like? How’s the food? What about the service?

This isn’t a full review – we’ll write a more detailed recap of this flight in the coming days. But we wanted to give a flavor of what it’s like to fly Iberia business class … and the one major reason why it’s worth considering.

How to Book Iberia Business Class

Here’s what it all comes down to: You can fly up front in Iberia’s business class with a bed and better meals for roughly the same amount of miles as most airlines charge for economy.

That’s right. With Iberia, it’s just 34,000 miles to get to Spain from Chicago-O’Hare (ORD), New York City-JFK (JFK), or Boston (BOS) in business class – and more Considering most airlines charge 30,000-35,000 miles to fly one way in economy, we don’t need to say this, but we will: This is a steal. You may never find a cheaper way to get to Europe in business class than Iberia. That alone makes it worth considering.

Iberia flies in and out of Madrid (MAD), but it’s easy to connect onward to great cities like Barcelona, Sevilla, Valencia, Lisbon, or elsewhere in Europe. And while Iberia passes on some fees on award tickets – expect to pay about $220 or so on a round-trip ticket in business class – they’re more reasonable than what you’d pay at other major European airports like London-Heathrow (LHR) or Paris-Charles de Gaulle (CDG). That makes Iberia business class a great option to get anywhere in Europe.

And here’s the best part: It’s insanely easy to get the Iberia Avios you need to book these flights. That’s because you can transfer points from American Express, Chase, and Marriott Bonvoy directly to an Iberia account. So whether you’ve got the American Express Platinum card, Chase Sapphire Preferred, or a stash of Marriott points from hotel stays, you’re set.  For more information on these cards, check out our Top Credit Cards page.

The Ins and Outs of Iberia Business Class

Let’s get down to it.

Iberia flies three different planes on long-haul flights: The Airbus A330, A340, and the latest and greatest Airbus A350s. Our flight from Chicago-O’Hare (ORD) to Madrid (MAD) was on an older A330. The good news is that while the actual seat map may differ between planes, the seats themselves are largely identical no matter which bird you’re on. 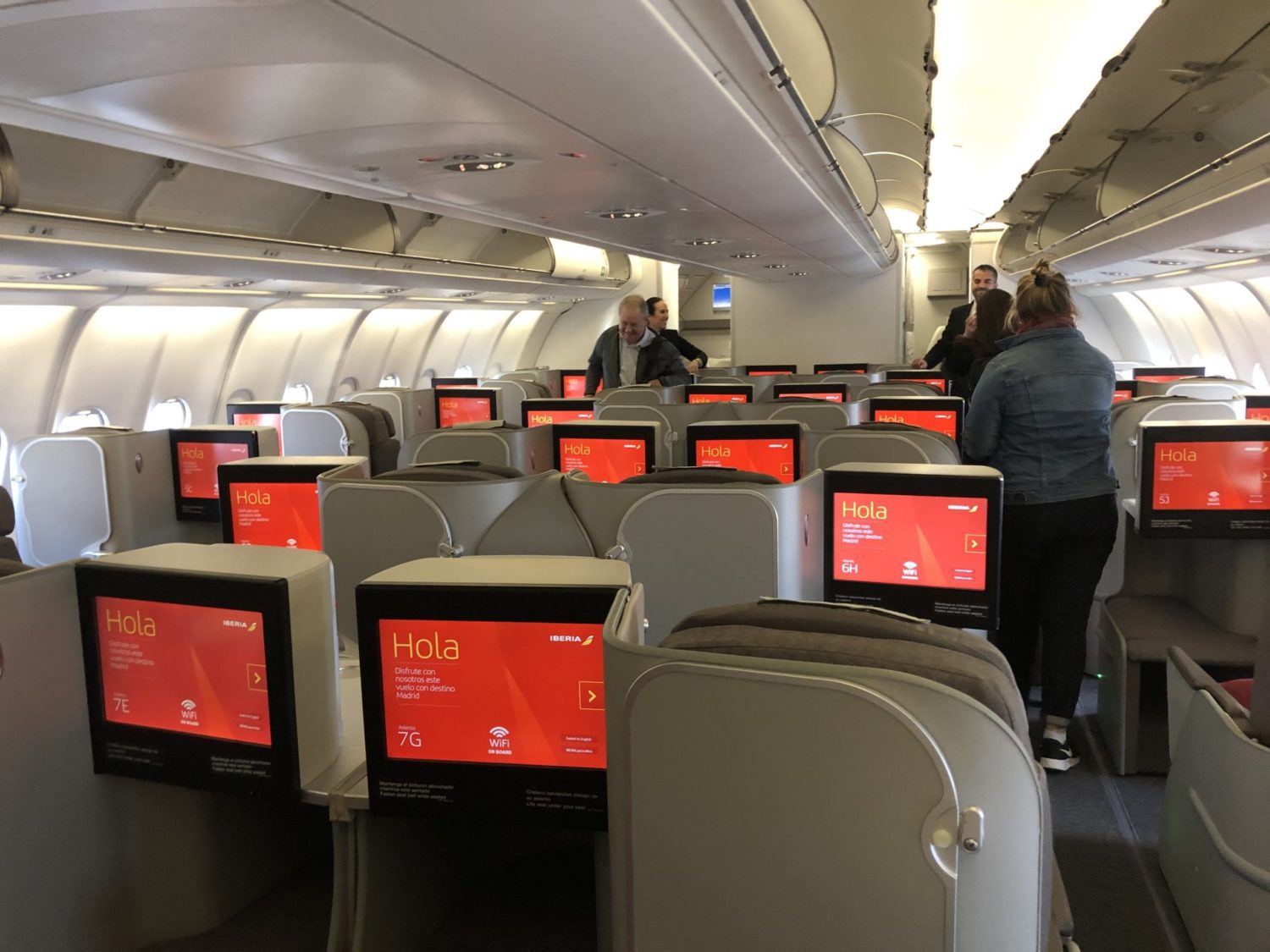 The Iberia business class cabin is laid out in a 1-2-1 fashion, which means every passenger gets direct access to the aisle. The seats are staggered, so some are closer to the aisle while others have a console to provide some extra privacy. The cabin is done in Iberia’s red, black and grey palette – a bit plain, but still attractive.

On the Airbus A330, odd-numbered seats on the wing sides are closer to the window. Meanwhile, while even-numbered seats along the wing sides of the plane are more exposed to the aisle. 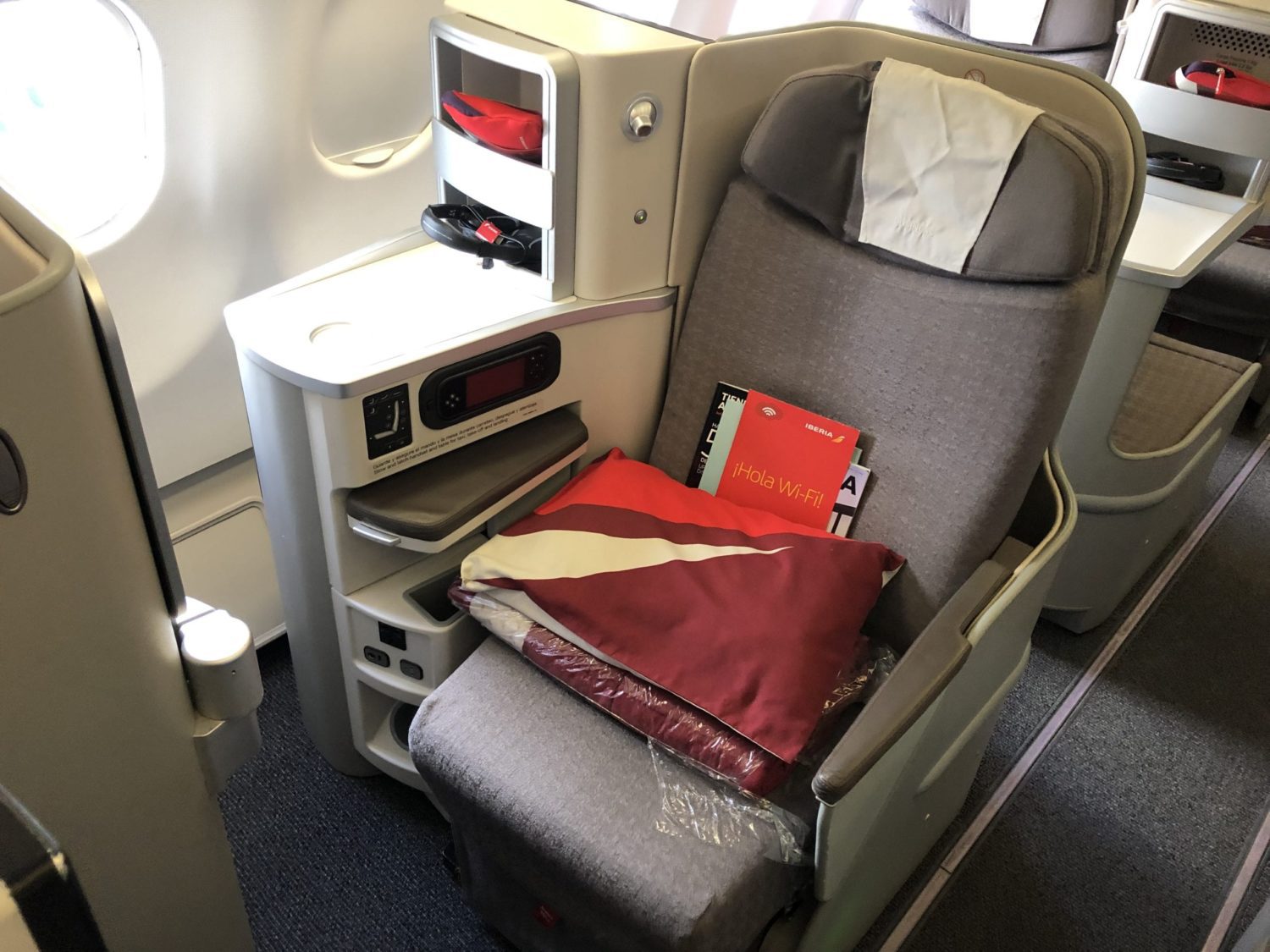 In the middle section, you have one of the best setups for traveling couples. Aside from sharing a double bed on ritzy first class airlines like Singapore Airlines, you may not find a closer arrangement than these honeymoon seats in the odd-numbered rows on the A330. As you can see, there’s a plastic divider that can be pulled up if you don’t know your neighbor. Still, it’s not big enough to really block the whole neighboring seat out. Behind these seats, you can see a pair of seats farther spread apart, divided by center consoles that push them close to the aisle.

The seats themselves might be familiar. It’s a pretty common setup that even top-notch airlines like Emirates, Etihad, and many others use for business class. Come bed time, you’re one button away from reclining into a pretty spacious bed. Notably, the foot cubbies are very large and not at all restrictive.

The duvet is plenty thick and large. The pillow, meanwhile, is a bit too thin. If you’re lucky, you can snag another one from an empty seat nearby. You’ll get two meals on these transatlantic Iberia business class flights: A dinner (or lunch when heading west), and then a “light meal” roughly 90-120 minutes before landing.

Dinner was a fairly elaborate, four-course meal. This is a Spanish airline, so of course, service starts with some nuts and olives along with a drink of choice.

For starters, there was a tray with prosciutto (the irony of serving Italian ham on an airline from a country that prides itself on its jamon iberico was not lost on me) with pesto and mozzarella, a small side salad, cheese and jam, and some chicken consomme – a fancy word for “broth.” For the main course, passengers had a choice of three options: a veal medallion with steamed potatoes and vegetables; grilled shrimp an scallops in a saffron sauce; or mushroom ravioli in a sherry wine sauce. I opted for the grilled shrimp and scallops, which was excellent. Though the portions were small, it was tremendous. That sauce is packed full of flavor. And finally, dessert was a choice between an apple cake or caramel ice cream. I went for the apple cake, which was fine but not outstanding. Oh, and a glass of port wine.

Iberia really prides itself on its wine menu, which is full of Spanish wines. I’m not a white wine drinker, so I passed on those. But the few red wines I sampled were delicious.

The “light meal” before landing, on the other hand, was perhaps the most disappointing part of the flight. A small bowl of fruit, yogurt, a small croissant, and two crostinis was about all that was offered. Luckily I wasn’t very hungry, but it really seemed skimpy – where is the meat and cheese to make this a European breakfast? A Note About Service

Service throughout the seven-hour flight was great, from start to finish. Flight attendants were great about getting dinner out quickly, allowing passengers to get to sleep as soon as possible. And every single request and interaction I had was met with a quick smile and a nod – somewhat curt, but polite.

But don’t expect to be waited on hand and foot, as is the case with many Asian airlines like EVA or Singapore or Middle Eastern titans like Qatar Airways. For starters, these flights across the Atlantic Ocean are far shorter, and service is centered on getting passengers fed and put to bed. Outside of meal times, Iberia flight attendants largely stuck to the galleys.

No matter which direction you’re heading, you’ll get to spend the time before boarding in some great lounges.

Thanks to its partnership through the Oneworld alliance, you can get into American Airlines’ Flagship lounges – some of the best spaces available in the U.S. The lounge at Chicago-O’Hare (ORD) is huge, with tons of seating options, a wide spread of both hot and cold foods, and its own small champagne bar. And if you’re departing from Madrid (MAD), it gets even better. Iberia’s Velazquez lounge in Terminal 4S – where all U.S.-bound flights depart from – is absolutely massive. It has two separate dining stations with their own buffet setups, a dedicated dining section for dinner time departures, six shower suites and five sleeping rooms, and a dedicated wine bar. The whole lounge is full of tasteful decorations and a wide array of comfortable seating. Is Iberia the world’s best business class? No, it’s not.

Iberia won’t win any awards for its seating, food or service. If you’re looking for the most luxurious flying experience in the air, this isn’t it.

But Iberia business class holds its own with most airlines flying across the Atlantic. It’s a great airline, and a great business class product. And at 34,000 miles each way to fly in business class, that’s a winner in our books. 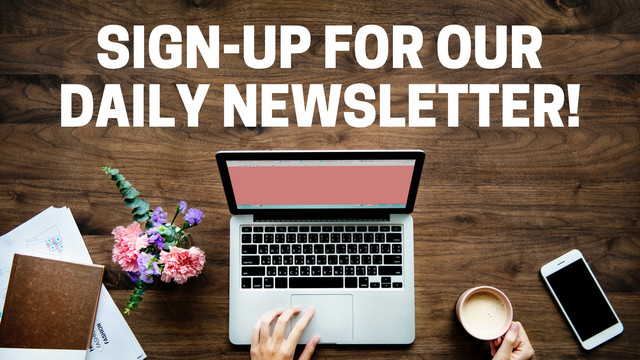 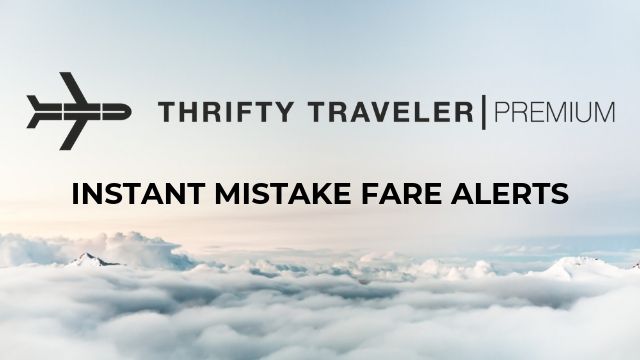