As travel bounces back for a potential surge, flyers departing Minneapolis-St. Paul (MSP) will get another favorite lounge option back this summer. But they'll have to wait even longer for a long-awaited new Delta Sky Club.

The fan-favorite MSP Escape Lounge at Terminal 1 is set to reopen sometime in August, Thrifty Traveler has learned. That lounge has been closed since March 2020, staying off-limits as other Escape Lounges across the country reopened in recent months. But it will look different when it finally reopens, as it gets a facelift with new furnishings and a few other changes. 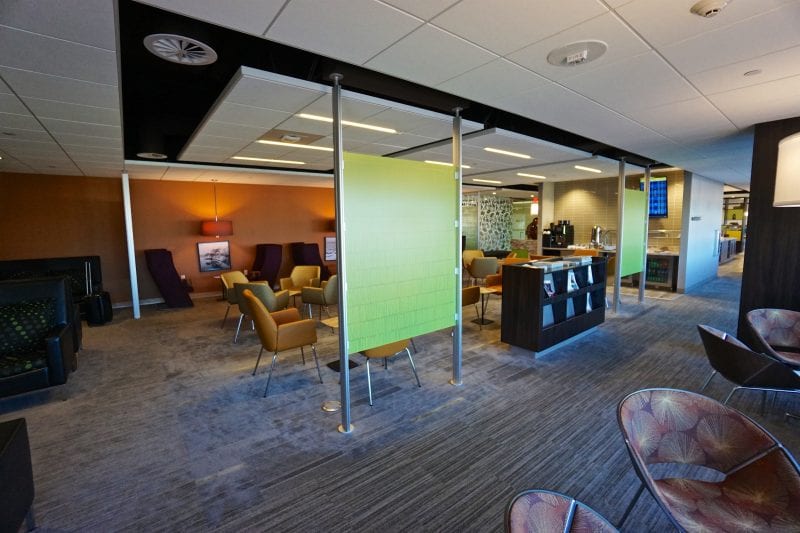 The plans for the Escape Lounge don't include expanding beyond its current 5,000-square-foot space. While certainly on the small side, the lounge rarely felt busy compared to the considerably larger Delta Sky Club before the pandemic.

Yet little has changed inside the space since it opened back in 2016 aside from reshuffling chairs and seating. So it's getting a new look, complete with new seating and finishes throughout the lounge. MAG, the lounge operator, also plans to swap out self-service buffet dining with a modified table order service for food. It's unclear whether other Escape Lounge locations will see similar changes for dining.

“Guests will notice improvements such as enhanced seating options, cosmetic updates and enhanced service but overall, their experience will be the one that they recognize and love from Escape Lounges,” a spokeswoman for the lounge said of the plans at MSP.

Cardholders with the Platinum Card® from American Express can get into Escape Lounges free, along with two guests. You can also buy day passes starting at $40 when prepurchased online.

We broke the news last year that Delta planned to open its third Sky Club at its Minneapolis-St. Paul hub. The plans in early 2020 called for a massive new space down Delta's G concourse, opening in the summer of 2022.

But then the pandemic hit. Delta hit the pause button on the lounge as the fallout settled. That lounge is back on, but Delta says the new space won't open until early 2023.

“We are thrilled about our new Delta Sky Club coming to Minneapolis−Saint Paul International Airport at Concourse G in early 2023,” a Delta spokeswoman said. “Guests can look forward to relaxing and recharging in a new, 17,000 square foot Club that will feature a Sky Deck with breathtaking views, thoughtful design elements, an award-winning beverage program, reimagined food offerings, and other premium amenities delivered with care.”

At 17,000 square feet, the new space will easily become Delta's flagship Sky Club in Minneapolis. It will dwarf the current 12,000-square foot club in the main concourse, which was regularly overcrowded prior to the pandemic. Delta also has a smaller lounge in the C gates, a relic from Northwest Airlines.

Delta previously said it would renovate both existing Sky Clubs within the next year or so, though it's unclear if that is still in the works.

The plans call for the new Sky Club to be built on a second level near gate G17, perched above the terminal below. Delta hasn't shared many details about what you'll find inside, though newer Delta Sky Clubs often have standalone bars, local decor, and much nicer seating options.

One sure thing is an outdoor Sky Deck that travelers will love – at least for the few months you can use it in Minnesota. Those outdoor spaces are easily some of the best features you'll find at other Delta lounges like in New York City (JFK) and the Austin (AUS) Sky Club.

The timing of the project hinges on the major expansion of the airport's G concourse that's currently underway. Brian Ryks, the Minneapolis airport's CEO, this week said that work should be done by the end of 2021, at which point Delta could begin building out its new lounge.

Read our guide on how to get Delta Sky Club access!

It took some time, but the MSP Escape Lounge is set to open later this summer. With any luck, it will be a better space than when it closed more than a year ago.

And while it won't open until early 2023 at the soonest, Minneapolis will also get its best Sky Club yet.