Tournament of Destinations: And the Champion Is...
Skip to content

After four rounds and thousands of votes, the final results are in! Thrifty Traveler readers, subscribers, and followers have voted in each round this week to crown a winner of our first-ever Tournament of Destinations.

We'd like to say it was a close call, but the winner of this week's bracket won by a landslide. And the winner is… In a shocking final round, Machu Picchu absolutely trounced the Great Pyramids of Giza, winning nearly 72% of the vote. That stunning victory capped off an impressive tournament for the Peruvian citadel.

Macchu Pichu defeated some of the world's most famous landmarks to win the championship: The Eiffel Tower, La Sagrada Familia, and the Great Wall of China. And in each round, its competitors never stood a chance. 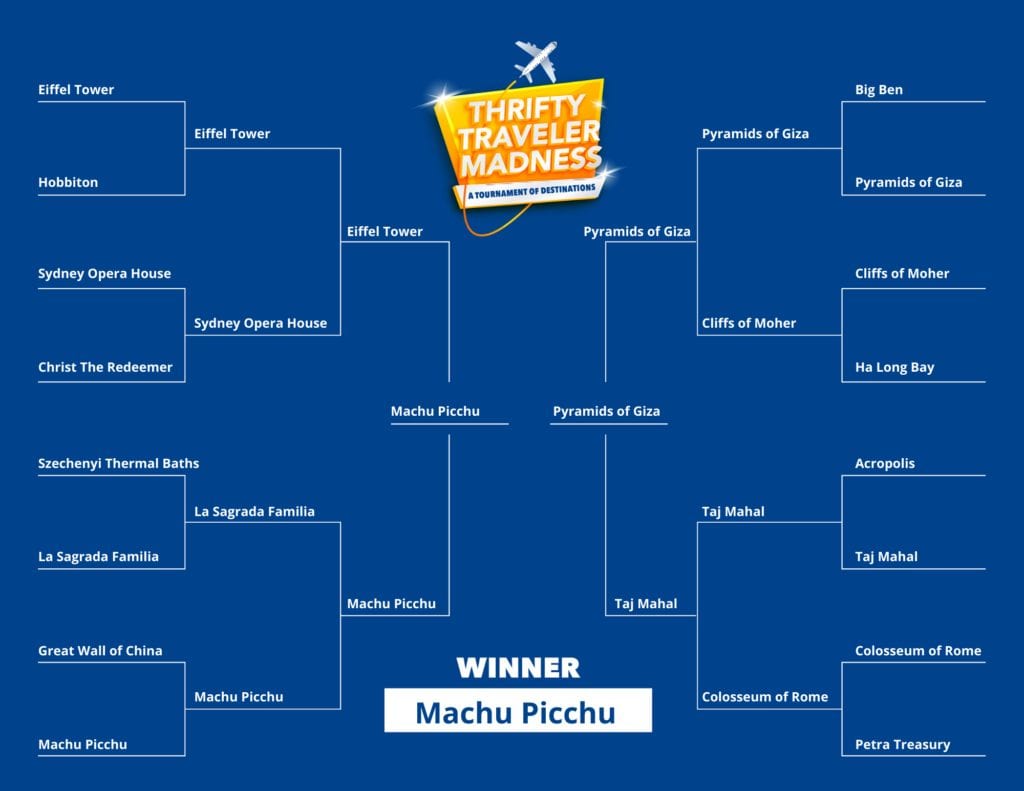 This was quite the tournament, with upsets and bracket busters we never anticipated!

While many travelers had picked the Petra Treasury to win it all, it was dumped from the competition in the very first round with a loss to the Colosseum of Rome.

We were shocked to see the Sydney Opera House advance at the expense of Brazil's icon, Christ the Redeemer.

The Acropolis of Athens was stunned by the popular vote for the Taj Mahal in the very first round, but the Taj Mahal couldn't hold its own against the mighty Pyramids.

In the battle between the Cliffs of Moher and the Great Pyramids, it was a close call. But the ancient attraction of Giza pulled ahead to secure a spot in the finals.

Which wins and losses shocked you most? Did you have the winner pegged from the start? Will you be celebrating a Machu Picchu victory today?

To honor the winner, we've created a tribute list to Machu Picchu:

We've found some of the best flight deals we've ever seen to South America this past week, including fares under $200 to Lima, Peru! Our jaws dropped when we found this fare for just $131 nonstop and roundtrip to Lima deep into the summer.

But Fort Lauderdale isn't the only city getting some flight deal love to Lima this week. We found the following roundtrip flight deals to Lima for travel June – September:

Want to get instant notification when we find international flight deals like these? Join Thrifty Traveler Premium!

If you feel like dreaming about a Peruvian adventure while at home, watch Anthony Bourdain: Parts Unknown Season One, Episode 7 on Amazon Prime

A Peruvian Meal at Home

First things first: cocktail. Make yourself a Pisco sour! Pisco is a brandy made in the winemaking regions of Peru. Take 1 1/2 oz Pisco and add 1 oz Lemon Juice, 1 Egg white, and 3/4 oz Simple syrup. Shake in a cocktail shaker with ice cubes, then pour into your glass and garnish with bitters.

Feel like spicing up your cooking? Make lomo saltado – it's easier than you think! This dish is essentially a steak stir fry served over french fries or rice. And you likely have most of these ingredients – tomato, garlic, soy sauce, vinegar — in your pantry already.

Want to transport yourself to the Incan citadel until you can get there for real? Read Turn Right at Machu Picchu by Mark Adams and The Conquest of the Incas by John Hemming.

We want to know: have you been to Machu Picchu, the winner of our Tournament of Destinations? Have any must-know travel tips to share?

Thank you all for voting in our Thrifty Traveler Madness: A Tournament of Destinations! Though we can't travel now, we hope this was a fun way for you to look back on your past travels or dream of future trips.

Which destinations, famous attractions, and world wonders should compete in our next tournament? Let us know!