You can book lower-level, dugout box seats to select MLB games games for just 5,000 points apiece! You won't find this deal at every single game – inventory is limited – but we're still seeing tickets at these ultra-low rates for games through the summer. After first releasing tickets only for games through May, we're now seeing 5,000-mile tickets available through July … and we hope August and September games will be bookable soon as well. And they're available at every stadium in the country, though some like Yankee Stadium might be harder to book before tickets disappear.

So just how good of a deal are these tickets available for 5,000 miles? Really, really good.

A Firsthand Look from the Dugout Seats

When this partnership first launched back in April, I booked four tickets at Target Field to watch the Minnesota Twins play the Detroit Tigers at home for 5,000 Venture Miles each. To give some perspective, a few days before the game, seats in this same section were going for around $150 each.

We went to the game Tuesday night. Here's the view from our seats. 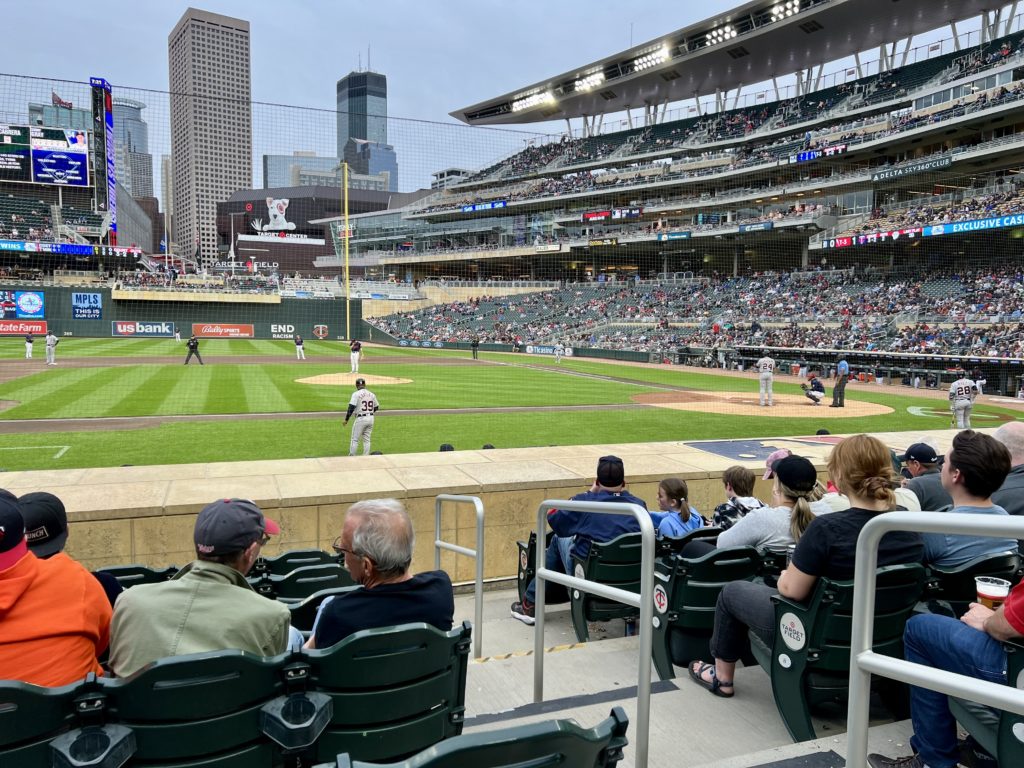 These special seats available through Capital One are some of the best in the house, no matter which stadium you're at. Capital One's exclusive ticket inventory at Target Field is in the 11th row of section 13 just above the visiting team's dugout. 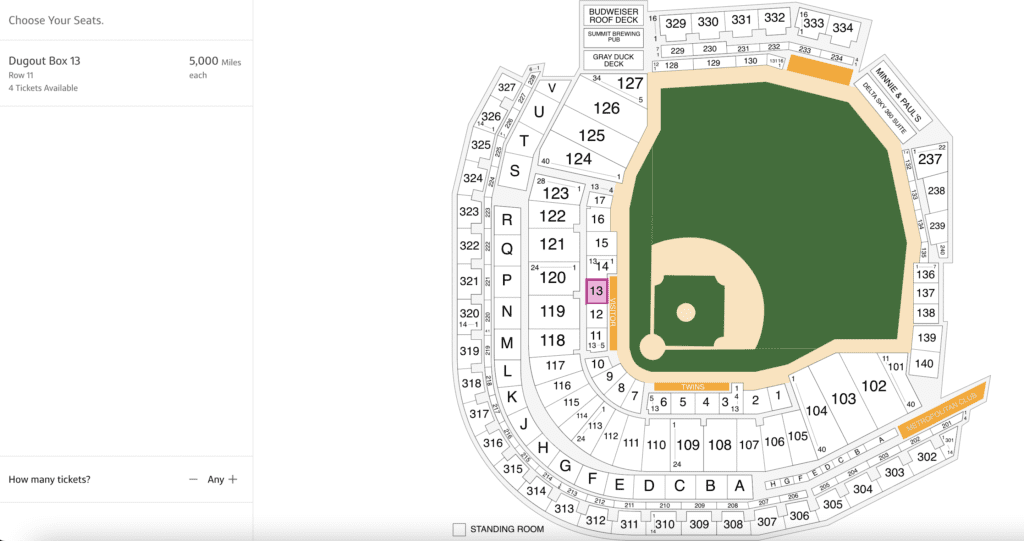 If paying cash for four of these seats, you're looking at a minimum of around $300 … and that's before taxes and fees. You might do a little bit better on secondary markets like Stubhub and SeatGeek, but you're not going to do better than free using Capital One Venture Miles.

If you're not a Twins fan or are located in another city, don't fret. All 30 MLB teams are participating in this promotion. From the Yankees to the Padres and every stadium in between, you can book tickets through July with your Capital One miles. And as mentioned, games in August and September should be bookable soon.

How to Find Great MLB Tickets via Capital One

As great as this deal is, it won't be available for every game on the schedule. But you'd be wise to search sooner rather than later.

Capital One appears to have just four of these top-notch, lower-level tickets available for 5,000 miles at each game. Once those tickets are sold, you'll see far more options for seats you can book all around the stadium … but at a much worse redemption rate. 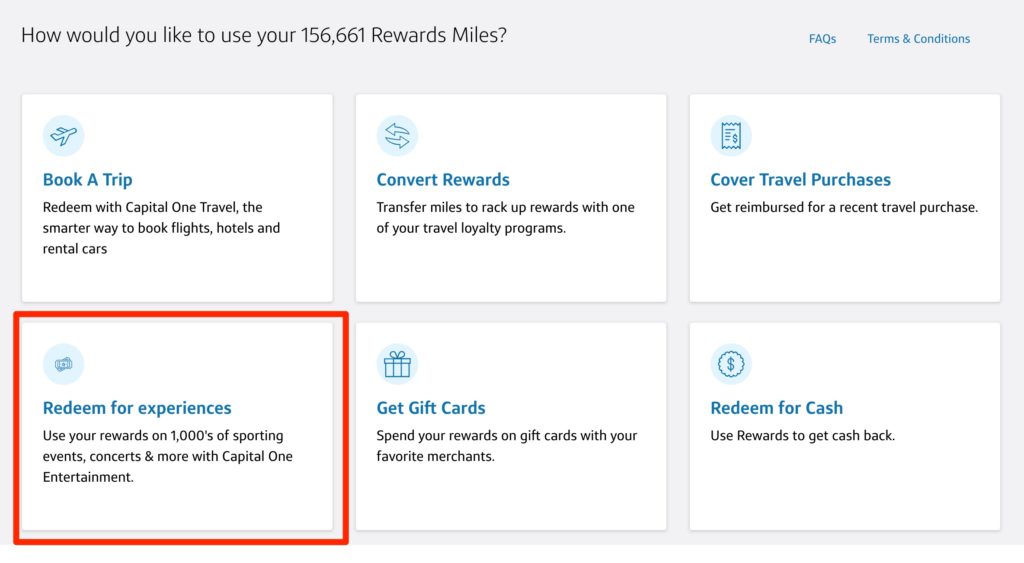 Once you land on the Capital One Entertainment homepage, you should see a section for MLB Single Game Tickets. And once you click on that, you'll be given the option to shop by team. Remember, all 30 MLB teams are available with exclusive Capital One ticket inventory. 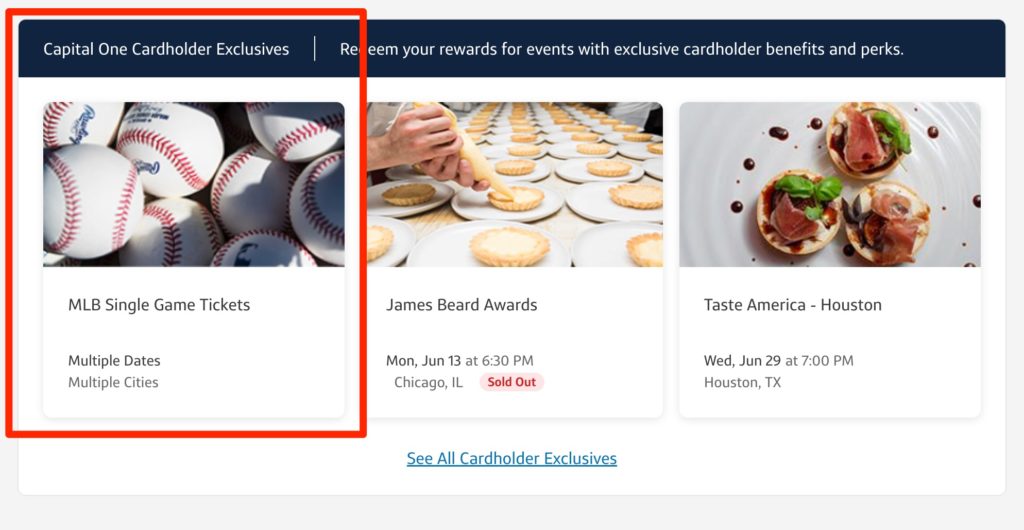 I chose the Minnesota Twins and started looking at tickets. When this promotion first launched, Capital One had four tickets available for each game through May. They have since opened up games through July, but you won't find lower-level tickets for cheap at every single one – once they're gone, they're gone. So how do you find games that still have exclusive ticket inventory available? You'll need to do some searching which will take a bit of trial and error. But here is what you are looking for.

Once you click the get tickets button on any of the games, you'll get to a screen as you'll see below. If Capital One's exclusive ticket inventory is still available for that game, it will be the only option you'll see. These are the tickets you want. As you can see below, the Rays vs. Twins game on Saturday, June 11 still has two of these tickets available. If you find a game that doesn't have any of these 5,000-mile tickets available, you'll see far more options … at a much worse deal. As you can see, there are plenty of tickets you can book with miles, but they will be tied to the standard redemption rate from Capital One Entertainment: Every Venture mile will be worth .8 cents. So a $100 ticket will cost you 12,500 miles. That's not nearly as good of a deal, and far less than what you can get by redeeming for travel. By doing a quick scan of Minnesota Twins games that are currently available for booking in Capital One Entertainment, I was able to find exclusive ticket inventory for the games on May 26, June 10, 11, 12, 17, 22, 23, 24, 26, and July 1, 2, 3, 17. And after poking around games for a few other teams, there are still plenty of games available at these rates.

Capital One plans to release games in August and September as well as postseason games in the coming months.

Baseball fans with Capital One miles have access to some fantastic lower-level tickets at an insane value! Right now, fans can spend just 5,000 miles per ticket to sit in premium lower-level seats, including dugout seats at all MLB ballparks. It's a bit of an off-the-wall points and miles redemption, but a fun one nonetheless.

It's the fantastic byproduct of the new MLB-Capital One partnership and has created a phenomenal value for sports fans looking to take in a ballgame this year.