Delta Halts More Routes, Including Minneapolis to Tokyo and Honolulu
Skip to content

As airlines continue shrinking to survive, Delta is suspending even more long-haul flights, including Minneapolis-St. Paul (MSP) to both Tokyo-Haneda (HND) and Honolulu (HNL) – the last two long-haul routes still operating out of its midwestern hub.

Thrifty Traveler reported the suspension of flights to the Japanese capital earlier this week. Delta confirmed that suspension Thursday as part of a deep set of cuts to its already slim international flying.

The airline will also halt flights between Los Angeles (LAX) to Tokyo-Haneda, New York City (JFK) to London-Heathrow (LHR), and nearly all of its flights to Hawaii and most islands throughout the Caribbean due to travel bans and restrictions. 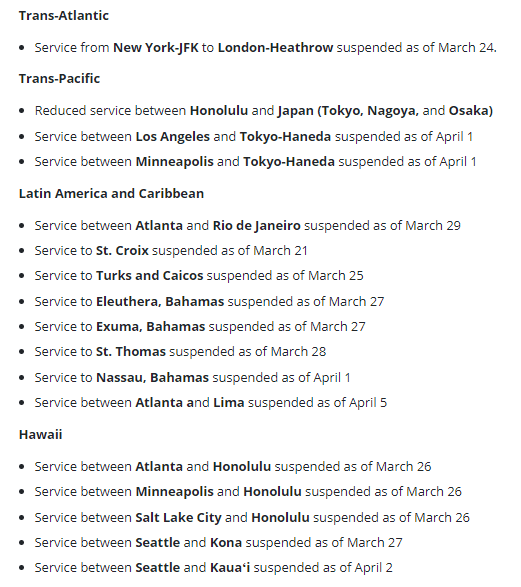 In Minneapolis, Delta had already reduced flights to Tokyo, first cutting daily flights down to five times weekly, and then just three times weekly. It was part of a broad set of reductions that reduced nearly all of Delta’s flights to Asia and suspended other, smaller routes – like Detroit (DTW) to Nagoya (NGO).

Delta did not specify when it planned to resume flights to Tokyo.

Earlier, Delta suspended its relatively new nonstop flight to Seoul-Incheon (ICN) from Minneapolis until at least June. And it was forced to suspend flights from its midwestern hub to London-Heathrow (LHR), Paris-Charles de Gaulle (CDG), and Amsterdam (AMS) due to the European travel ban. Icelandair and Aer Lingus suspended flights in and out of Minneapolis, too.

Across the board, Delta has slashed more than 80% of its international flights and plans to ground more than half its fleet. Other airlines are going into hibernation even further – American is only operating three international long-haul flights for the foreseeable future.

But those cuts are stark in Minneapolis, which had built up an outsized presence with new international service in 2019. In just the last year, it launched new flights to Dublin (DUB), Seoul, and had hoped to begin flights to Shanghai (PVG) this spring.

Coronavirus has wiped them all out, and the timing of their return is uncertain. Delta’s schedules currently show it will continue flying between Minneapolis and Mexico City (MEX), another new addition in 2019. But with non-essential travel between the U.S. and Mexico now banned, that may change too.

A year ago, Minneapolis-St. Paul airport was booming. Much like the travel world as a whole, coronavirus has turned it into a shadow of its former self.