What Do You Get Flying JetBlue Basic Economy? | Thrifty Traveler
Skip to content

After holding out for years, JetBlue finally introduced its own basic economy fares back in 2019, with more restrictions around changing, cancellations, and seat selection.

As you might expect, the airline that's made a name for itself by giving passengers more legroom, gate-to-gate WiFi, and live streaming TV at every seat does things a bit differently with basic economy. For starters, it's not called JetBlue Basic Economy: The airline calls these fares “Blue Basic.”

But it's not all good news. Changes made last year made these fares worse than what you'll find flying basic economy on almost every other major U.S. carrier – especially when it comes to baggage.

Here's what you need to know if you're flying JetBlue basic economy.

What You Get with JetBlue Basic Economy

JetBlue basic economy fares were in the works for more than a year. Executives at the airline promised that their fares would be more generous than their competitors when they launched in late 2019.

When Blue Basic fares were initially introduced, that was largely true … until JetBlue announced it would no longer allow basic economy flyers to bring a carry-on bag in early 2021. 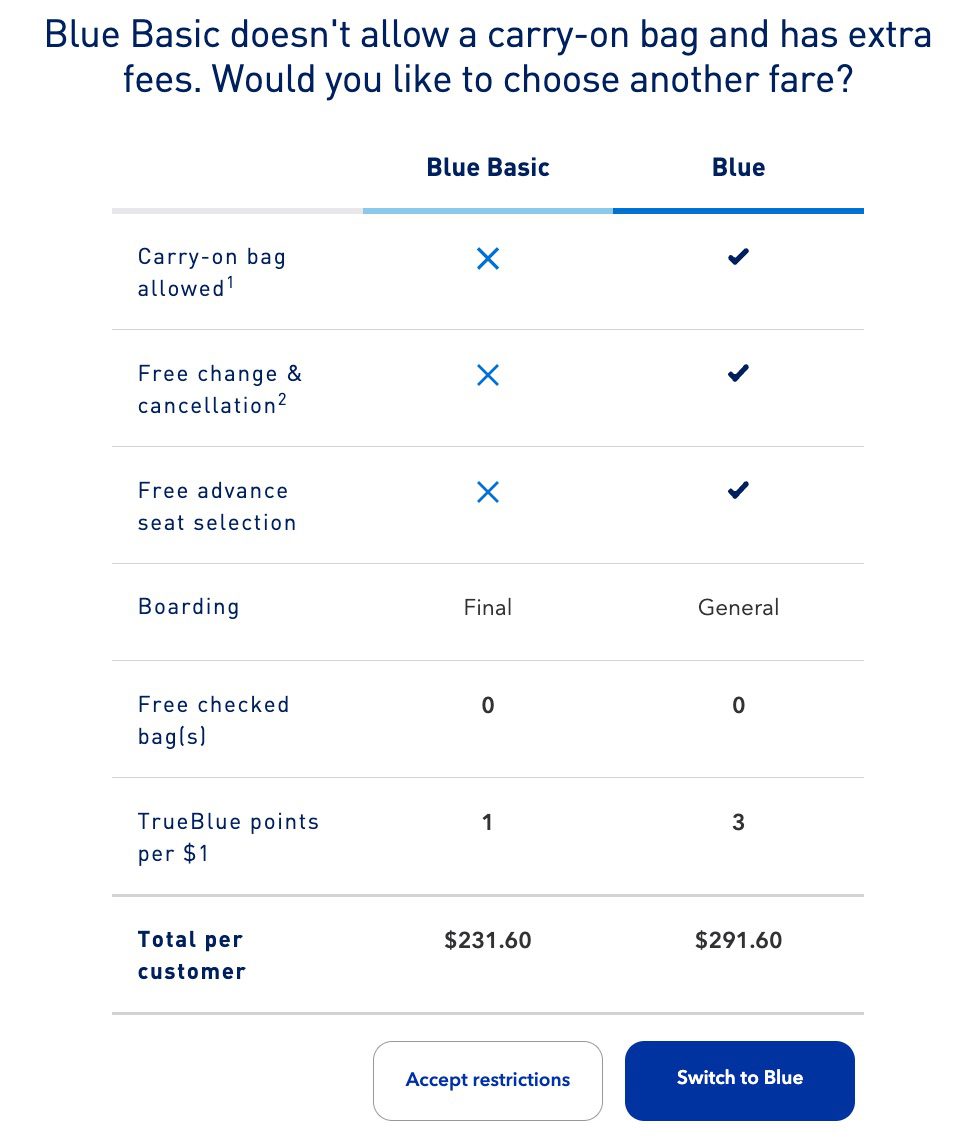 As you can see, JetBlue practically begs travelers not to buy a basic economy fare. Like other carriers, they force you to opt-in to basic economy, hoping that the restrictions convince you to pay up for a more-inclusive fare.

And one restriction stands out as particularly punishing: JetBlue no longer allows travelers with a basic economy ticket to bring a carry-on bag on board – JetBlue made that change back in July 2021. And if you try, JetBlue says they'll charge you a $65 penalty to gate check the bag.

That puts JetBlue in some bad company with United basic economy, the only other major U.S. carrier that bans basic economy flyers from bringing a carry on. JetBlue makes one exception: If you pay up for an expensive extra legroom seat (called Even More Space), you can bring a carry-on bag.

On the bright side, the seat selection policy for JetBlue basic economy is among the best in the industry. You can pay an additional fee to pick a seat in advance. Prices vary by route and date, but you can typically pick a seat for as low as $5 each way for a middle seat – or $7 for a window seat at the back of the plane. 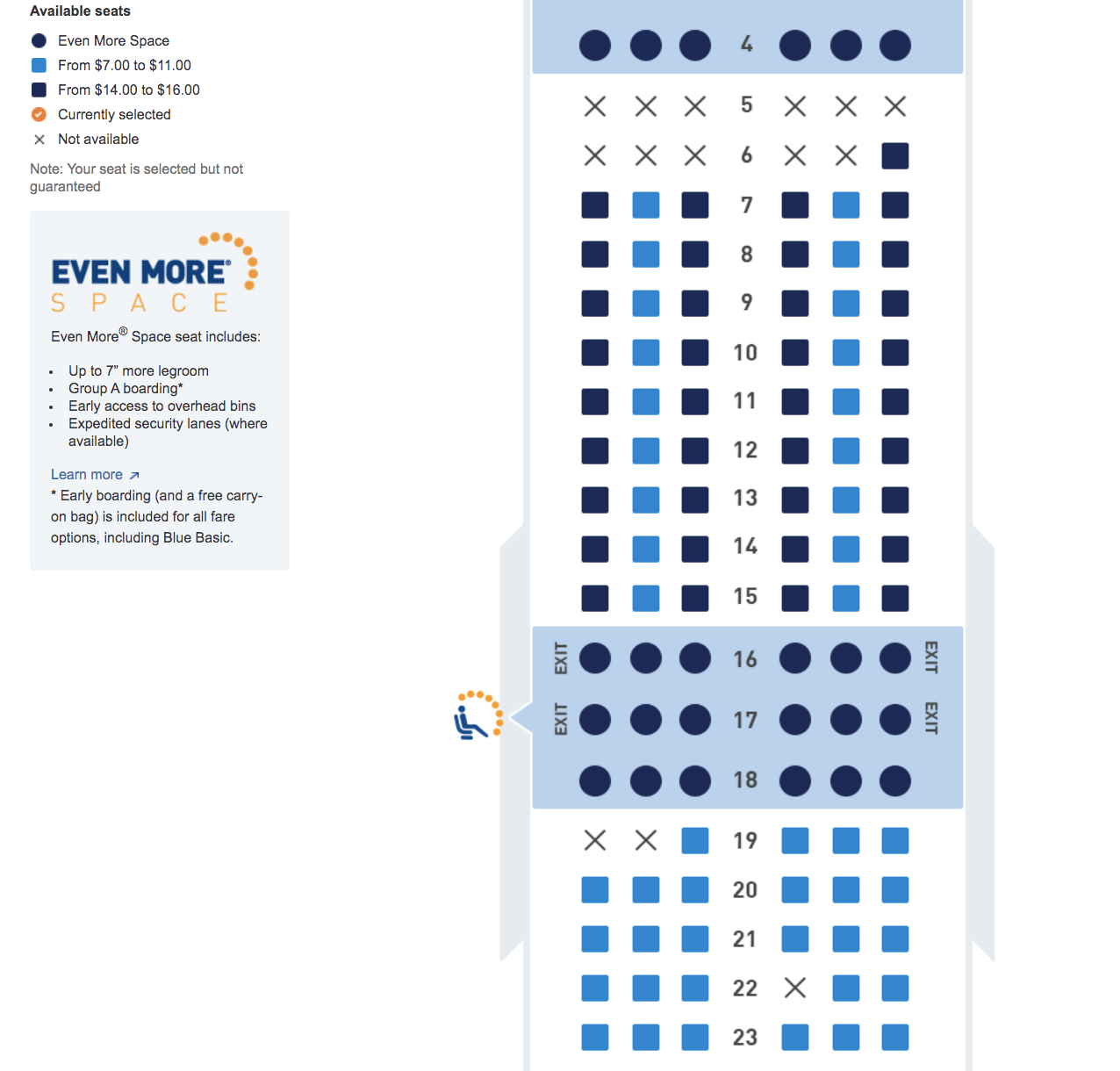 Otherwise, you can pick the best of what's left within 24 hours of departure for free. That's nearly identical to Delta, which offers two ways for basic economy flyers to pick a seat.

How to Beat JetBlue Basic Economy

Pay Up for an Even More Space Seat

Like almost every major airline, JetBlue has an extra legroom economy product it calls “Even More Space.” But unlike many other carriers, JetBlue allows even travelers with its cheapest Blue Basic fares to pay extra to snag one of those seats.

And it's a two-for-one: Not only do you get a seat with more legroom at the front of the plane, but JetBlue also allows travelers who combined a Blue Basic fare with an Even More Space seat assignment to bring a carry-on bag, too. Just keep in mind you'll have to pay for those spacious seats on every segment: Two times for a round-trip fare and four times for a round-trip fare with one connection.

The price to pick an Even More Space seat varies from route to route, but you can safely expect to pay at least $50 or so each way. Here's a look at what JetBlue is charging for a one-way flight from New York City (JFK) to Miami (MIA), for example. On the same route, buying a standard Blue economy fare makes these same extra legroom seats $20 cheaper apiece. 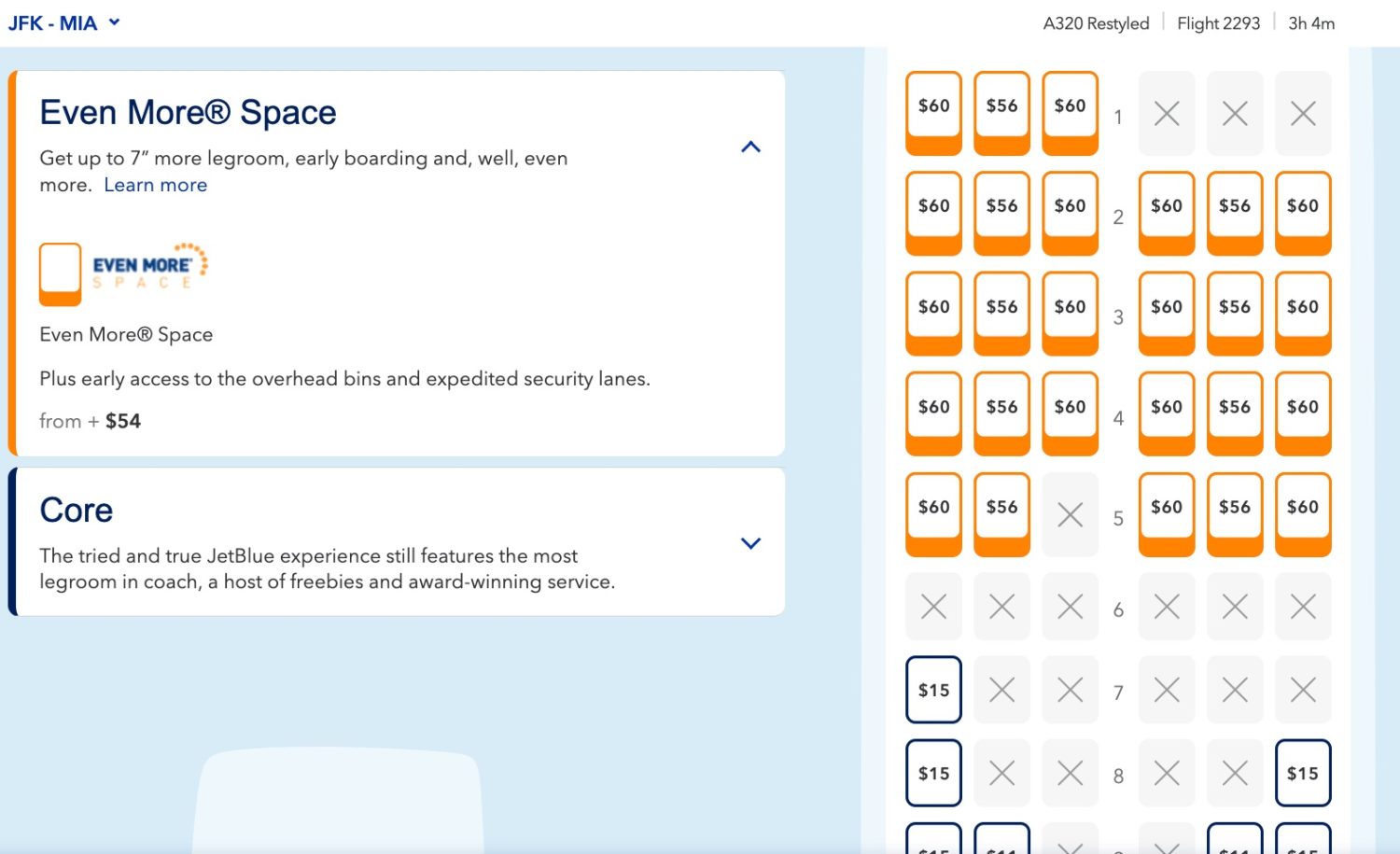 At that price, it's worth considering whether going the basic economy route is worth it or if you should just get a standard economy fare from the outset. But if saving some money while getting a carry-on bag and a seat with plenty of space is your top priority, you can come out ahead and beat JetBlue basic economy.

Mosaic is JetBlue's top (and only) level of status. And while earning airline status isn't right for everyone, it's clearly the best way to beat JetBlue basic economy.

With Mosaic status, you'll get two free checked bags and a free carry-on bag on any fare, including Blue Basic. You'll also get free early boarding, free change and cancellation, and at least 3 extra TrueBlue points per dollar when buying the fare. Those solve nearly all the major pain points of JetBlue Basic Economy.

Earning airline status requires a lot of flying, and JetBlue is no different in that regard. But through flying, spending on a JetBlue credit card, or a combination of the two, JetBlue Mosaic status is the easiest airline status to earn. Of course, if you're flying enough to earn JetBlue status, you probably shouldn't be buying basic economy fares to begin with.

With free carry-on bags going out the window, it might be time to check a bag with JetBlue.

JetBlue charges $35 per bag for all routes (except for London, which is $65). But you can save $5 a bag by pre-paying online (or via the JetBlue app) at least 24 hours before departure.

Read up on JetBlue baggage fees (and how to avoid them!)

But you can also get those two bags for free.

JetBlue has two co-branded credit cards: The JetBlue Plus Card and the JetBlue Business Card. Both are operated by Barclays, and both will get you a free bag on every JetBlue flight.

Not only that, but you can get a free first checked bag for up to three other passengers booked on your reservation. But there’s a catch: You have to pay for your flights with your JetBlue card in order to get the free bags.

That’s more restrictive than many other co-branded airline credit cards, which get you a free bag just for holding the card. And it also won't get you early boarding nor allow you to bring a carry-on bag onboard.

Still, it’s a nice benefit that can help you beat JetBlue basic economy and save on luggage.

JetBlue credit cards come with some other worthwhile perks that can pay off if you fly JetBlue frequently, like earning 6x points on all JetBlue purchases and the ability to pool JetBlue points. Both cards carry a $99 annual fee.

Is it Worth Flying Blue Basic?

For several years, they were one of the best basic economy fares out there. But now that they ban carry-on bags onboard unless you hold JetBlue Mosaic status, it makes them among the worst.

The ability to pick a seat for free within 24 hours of departure – or pay a small fee to pick a seat earlier – is generous. That policy places JetBlue in line with Delta, which won our battle of basic economy among the three biggest U.S. airlines by a mile.

You can change a Blue Basic fare for $100 on routes within the U.S., Mexico, Caribbean, and Central America (or $200 for other flights). That's also more generous than most airlines, which don't allow change or cancellation on basic economy fares, period. 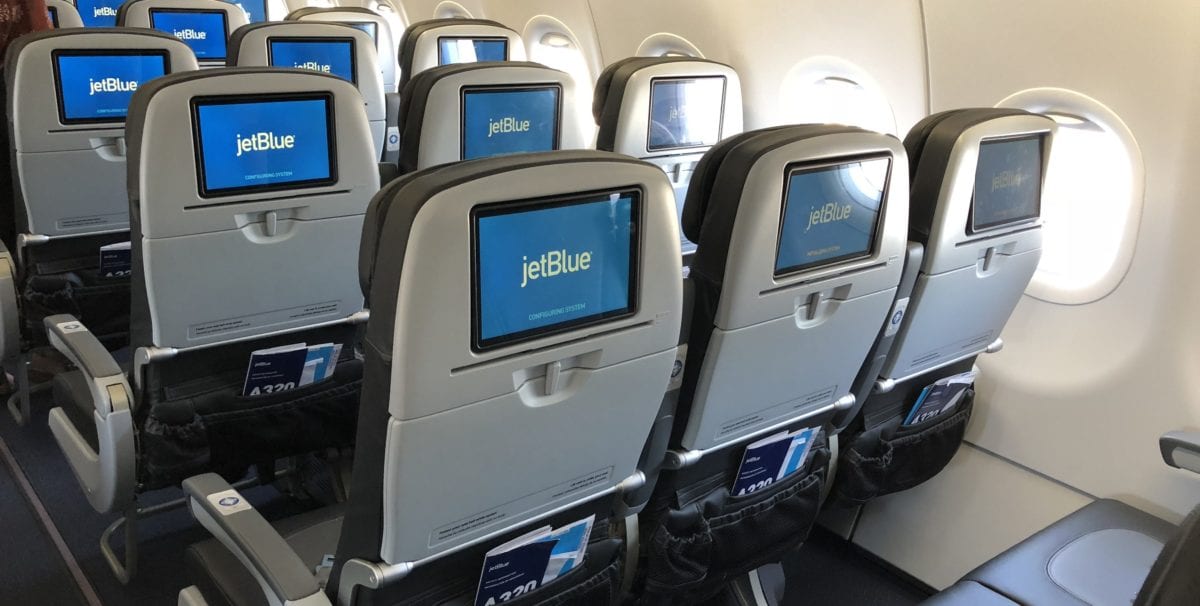 Read our review of flying JetBlue on the inaugural flight from Minneapolis-St. Paul (MSP) to Boston (BOS)!

But just about everything else about JetBlue basic economy is a major bummer.

Unlike other airlines, you don't get priority boarding by holding a co-branded JetBlue credit card. Unlike United basic economy, a co-branded credit card won't let you bring a carry-on bag, either. That makes it much harder to beat JetBlue basic economy. The only real way to beat a Blue Basic fare is by holding top JetBlue status.

These aren't discounted ticket prices. Instead, Blue Basic fare prices have largely taken the place of more-inclusive main cabin fares. You're paying the same and getting less.

JetBlue typically charges at least $60 to $80 roundtrip to “upgrade” from basic economy to a more-inclusive standard economy ticket. As basic economy gets more painful, those prices are likely to go up as airlines put the squeeze on consumers. So are those savings worth it?

It depends. You have to do the math. Can you get away with traveling with just a backpack? Fine leaving your seat assignment fate to chance until check-in begins when you can pick the best of what's left? Then JetBlue basic economy may make sense.

But if you're bringing a carry-on bag on every flight and pay for seat assignments, odds are you'll come out ahead paying more for a standard economy fare.

Unfortunately, JetBlue is leading the charge on another possible trend: Basic economy could get even worse. JetBlue basic economy fares no longer let you bring a carry-on bag onboard. It's all part of the airlines' pressure to get you to pay up to avoid basic economy altogether.