Things go wrong with air travel. It's just an unfortunate but universal truth. And now more than ever, travelers are bracing for trouble after a slew of recent mass cancellations and delays heading into the busy summer travel season.

While calling the airline to sort things out might be your first instinct, the hold times can be lengthy – especially now. And you might find the agent who eventually gets on the other line isn't well-equipped to handle things. But there can be a better way. Message your airline on Twitter. Seriously.

It's not an option on every airline – Delta halted accepting direct messages in early 2020 and still hasn't resumed it. But when it works, there's no easier or faster way to sort out a problem with your flight than direct messaging an airline on Twitter.

Even if you're not a fan of Twitter – no judgment here – it could be worth setting up an account just to get a private line into the airline employees who can help you out.

The Power of Direct Messages

My wife and I were 33,000 feet in the air, somewhere over Spain, a few years back when we realized there was an issue with our American Airlines boarding passes.

Our TSA PreCheck accounts weren't showing up. And while TSA PreCheck can be an incredible time-saver no matter the situation, it was urgent this time. With a trip through immigration and customs and less than 90 minutes to make our connecting flight, we needed to save as much time as possible.

So I connected to the inflight Wi-Fi and sent a message to the @AmericanAir account. Within three minutes, the airline responded. And within 15 minutes, it was all sorted. 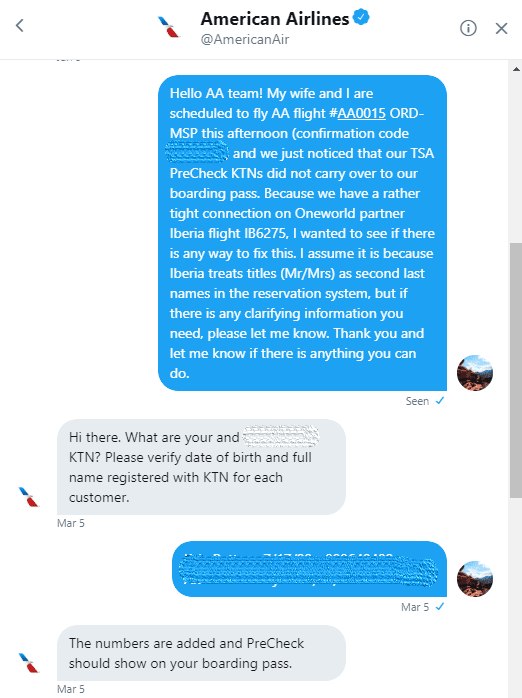 We refreshed our boarding passes and there it was: The PreCheck logo. I'm sure it would have taken an hour on the phone or more to get it handled. That's not an option up in the air – and why would you when you can just send a quick message via Twitter instead?

But what about when your trip goes off the rails? That's happening to many of us these days, thanks to meltdown after meltdown on airline big and small over the last year. Whether you need to cancel a flight, reschedule a canceled trip, or push for a refund, Twitter is once again a great place to start.

It's a private channel where you can quickly share sensitive information like your flight confirmation number, date of birth, passport number, etc. and quickly solve any issues. What's not to love?

At the very least, it's worth firing off a message to your airline via social media before you step in line to speak with a gate agent or pick up the phone and sit on hold for hours on end. You never know which avenue to reach someone at the airline will pay off first.

Read more: What to do When an Airline Delays or Cancels Your Flights

Any airline worth its salt is on Twitter. Many foreign airlines have several, including specific accounts for U.S.-based travelers.

And with few exceptions, they all allow any user to send a direct message – you don't need to be followed by the airline account to reach out privately, as with most Twitter users.

We won't list all the accounts here, but here's a smattering of some of the largest airlines on Twitter.

Twitter can be a godsend when problems arise. Get your account fired up and don't hesitate to slide into an airline's DMs next time you have an issue.