Delta SkyMiles Deals Have Been Crazy Lately, Don't Miss Out
Skip to content

We don't mean to toot our own horns … but “beep beep” – the Delta SkyMiles flash sales we've been digging up lately have been nothing short of spectacular.

Last week alone, we sent Thrifty Traveler Premium+ members several unbelievable award fare alerts to put their Delta SkyMiles to use: a stunning deal all the way to Tahiti from just 50,000 SkyMiles roundtrip, nationwide fares all across Europe for 32,000 SkyMiles apiece, and down to Belize and back for as low as just 12,000 SkyMiles total! And then there were other recent SkyMiles deals to New York City, Cabo, and even Australia, too.

Sure, Delta SkyMiles can be difficult and frustrating. The amount of miles you need to book a flight is unpredictable and always changing thanks to the airline's dynamic award pricing. Business class redemptions are often through the roof.

But this is the tradeoff: Outstanding deals with flights bookable for half the miles that other airlines typically charge – or even less. There's truly no better way to redeem your SkyMiles than flash sales like these.

So how do you get them? And where can they get you? We're so glad you asked.

A Recent Roundup of SkyMiles Sales

Just two weeks ago, Delta announced a shocking new route: Come this winter, the airline will start its first-ever nonstop service all the way to Tahiti, flying from Los Angeles (LAX) to Papeete (PPT) and back.

Less than a week ago, we unearthed a jaw-dropping deal on that brand-new route with roundtrip fares as low as 50,000 SkyMiles! 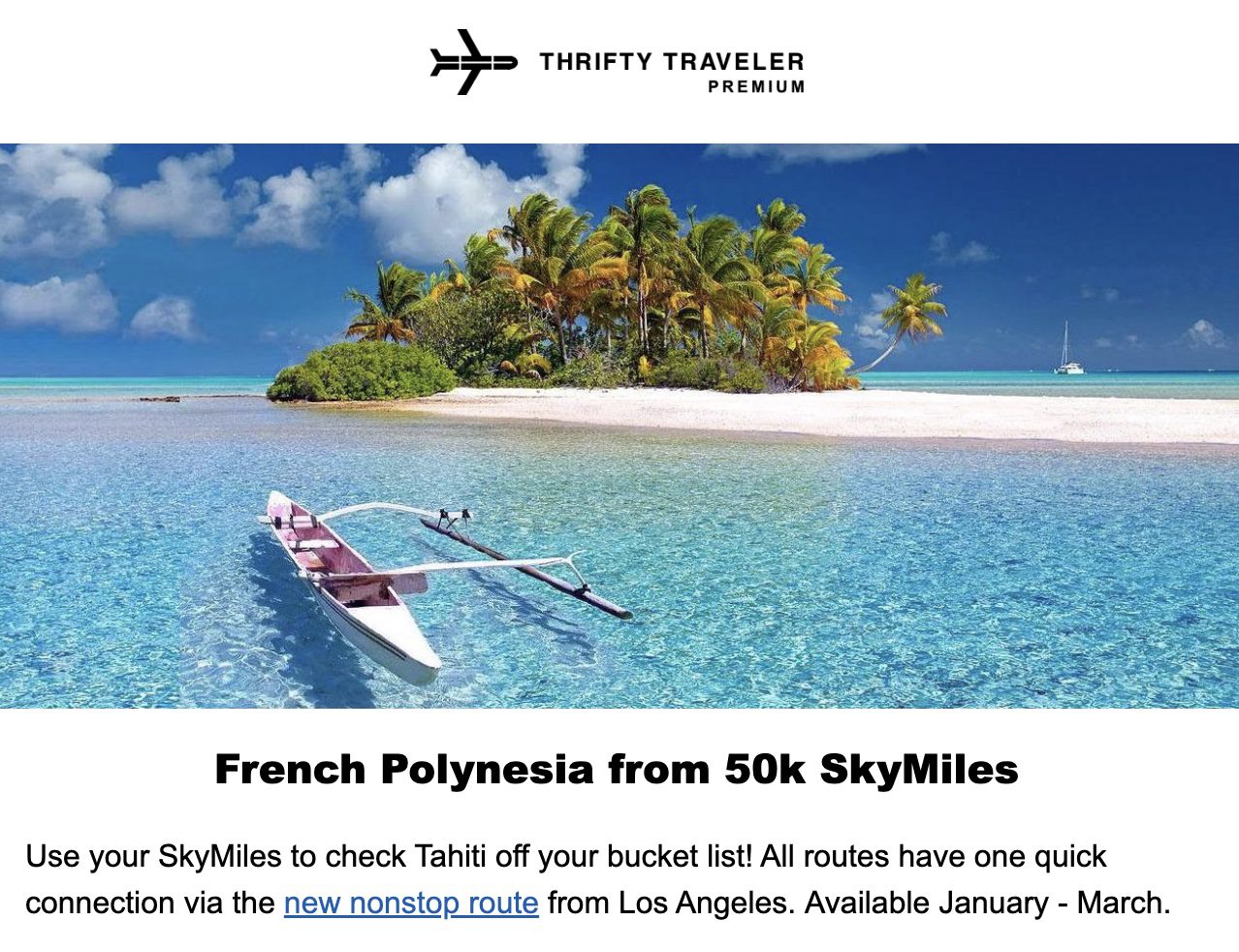 This deal is gone now! Get the next great Delta SkyMiles flash sale (plus other award alerts and cheap cash fares) with Thrifty Traveler Premium+!

Bay Area residents got the lowest of low prices, but there were plenty of cheap rates from other cities like Los Angeles (LAX), Minneapolis-St. Paul (MSP), Salt Lake City (SLC), Seattle (SEA), and even Phoenix (PHX) or Boise (BOI). 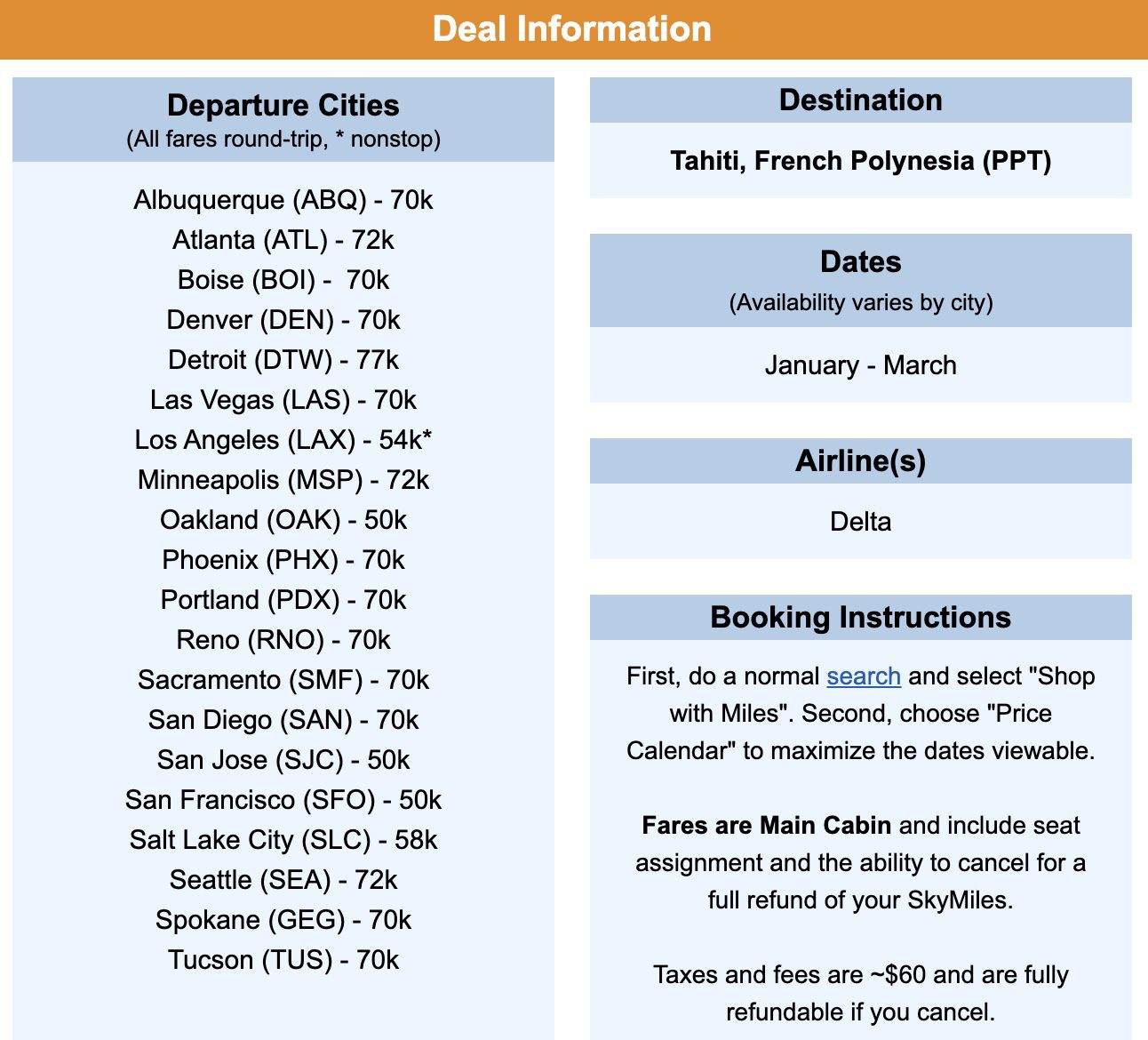 Thrifty Traveler Premium+ is the only flight deal alert service on the market that sends members both cheap cash fares and award alerts to book flights using points and miles – including these dirt-cheap SkyMiles sales as well as business and first class redemptions.

And those SkyMiles sales didn't stop in Tahiti. For the third time in the last year, roundtrip flights to Europe dropped to just 32,000 SkyMiles last week for a trip this fall or into the winter. That's less than half of what most airlines charge for a trip to Europe. 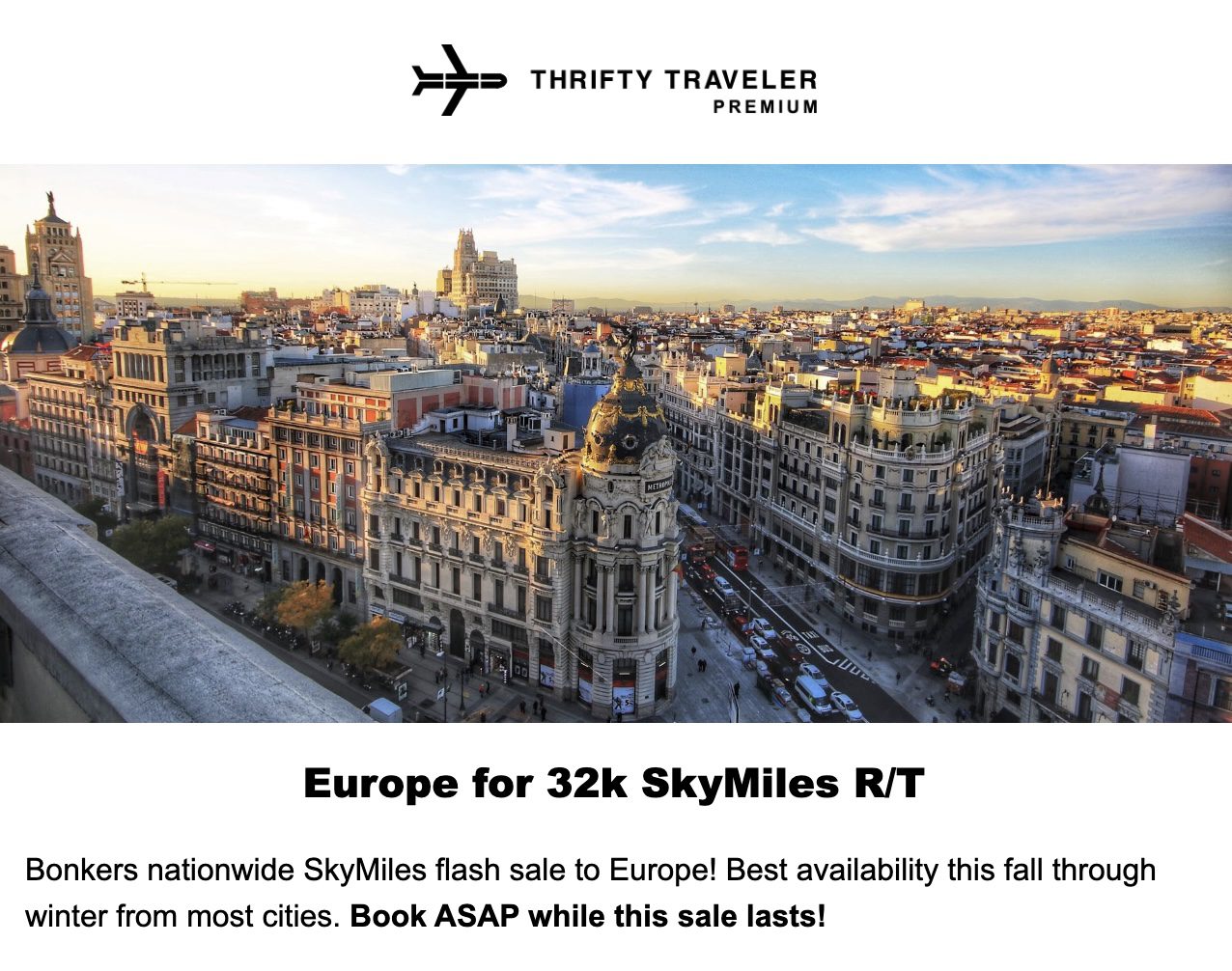 Here's just one example of a one-stop trip from Minneapolis-St. Paul (MSP) all the way to Madrid (MAD) and back. But this deal included dozens of European cities and hundreds of U.S. airports with Delta service. 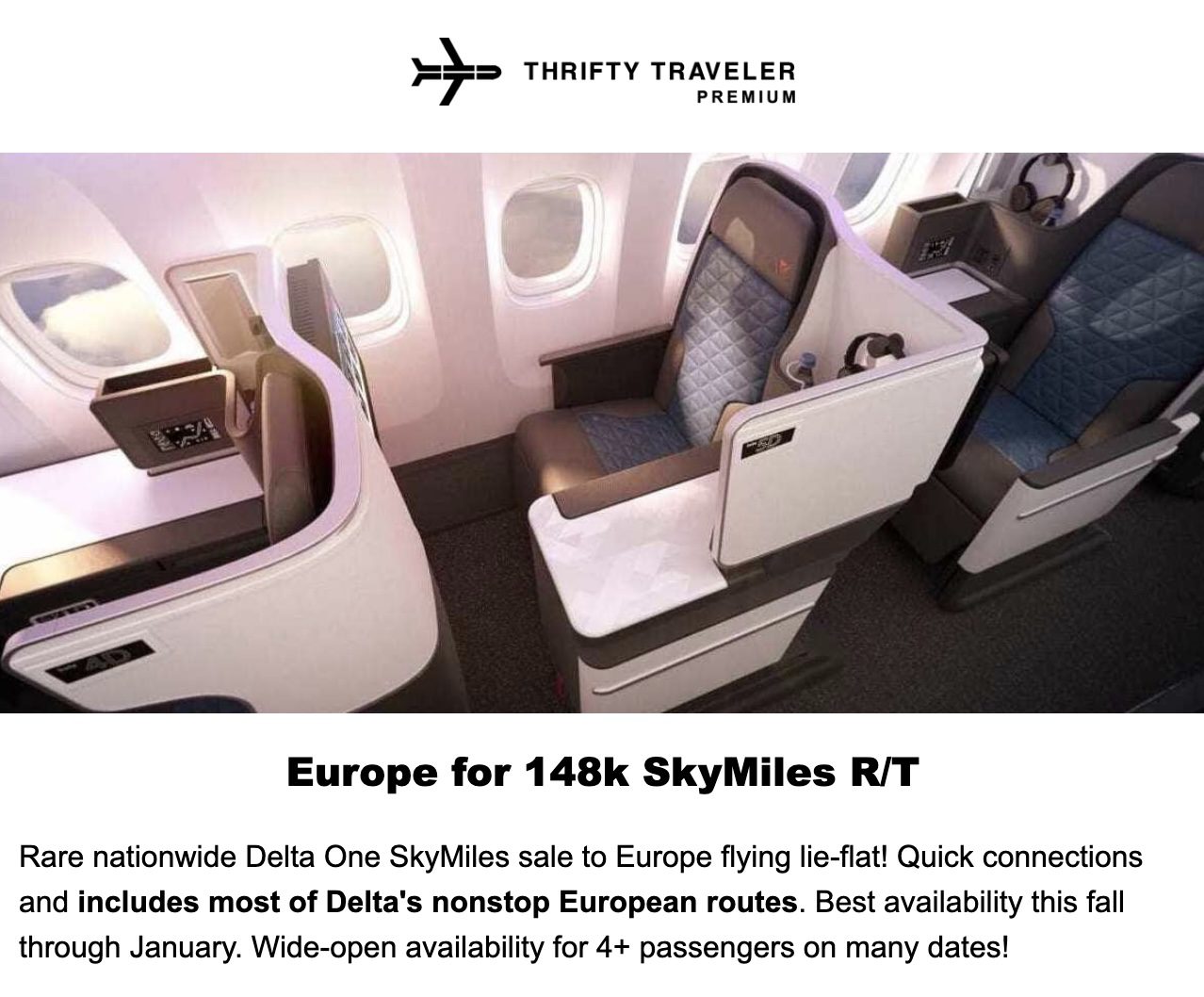 Or how about a trip down to Belize? It's mecca for beachgoers and snorkelers alike, but fares to Belize City (BZE) are rarely cheap whether you're using miles or cash. So this roundtrip fare from 12,000 SkyMiles apiece was a bargain.

This deal is gone, too – get the next one with Thrifty Traveler Premium+!

Those deals are just the tip of the iceberg. Over the last few months, we keep seeing some excellent SkyMiles deals to almost every corner of the globe.

How about we start by going down under for a bargain? Getting to Australia for less can be tough … unless you hopped on this deal for 70,000 SkyMiles roundtrip. 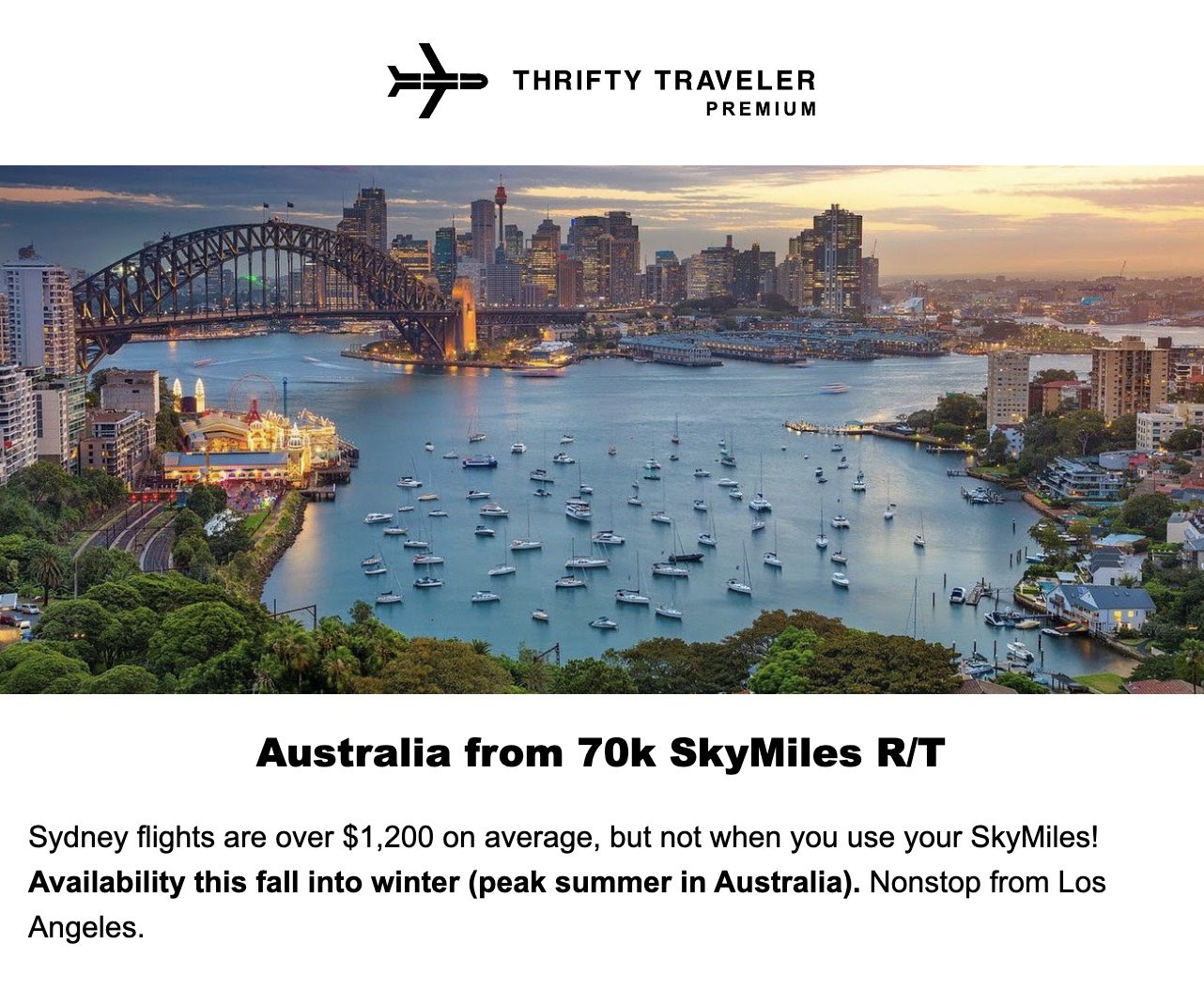 Anyone interested in the Baja Peninsula of Mexico? For just 11,000 SkyMiles, you should be. 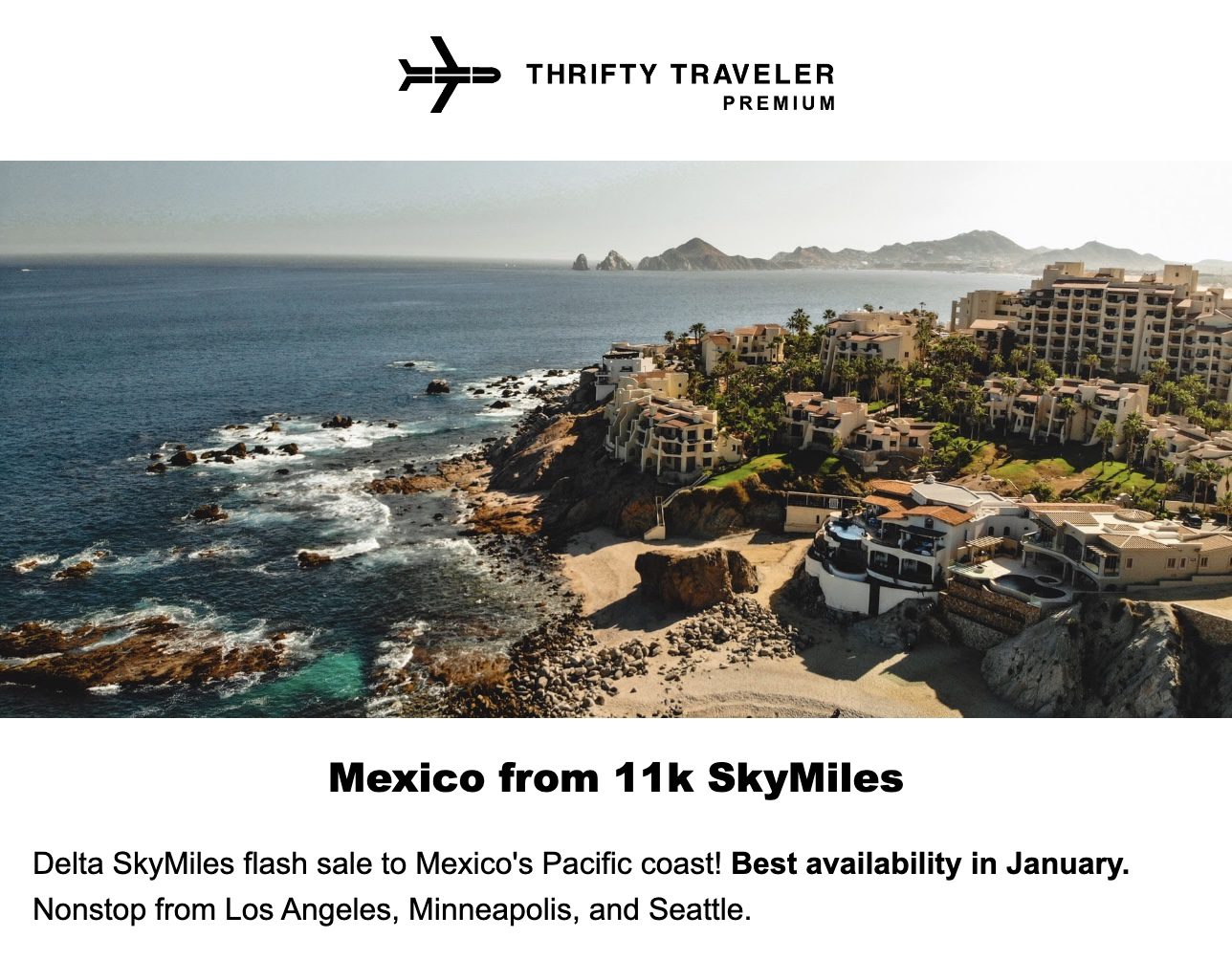 Or something to the mountains? Cheap domestic fares were hard to come by throughout much of the summer, but these roundtrip flights for 7,000 SkyMiles to Denver (DEN) turned that on its head. 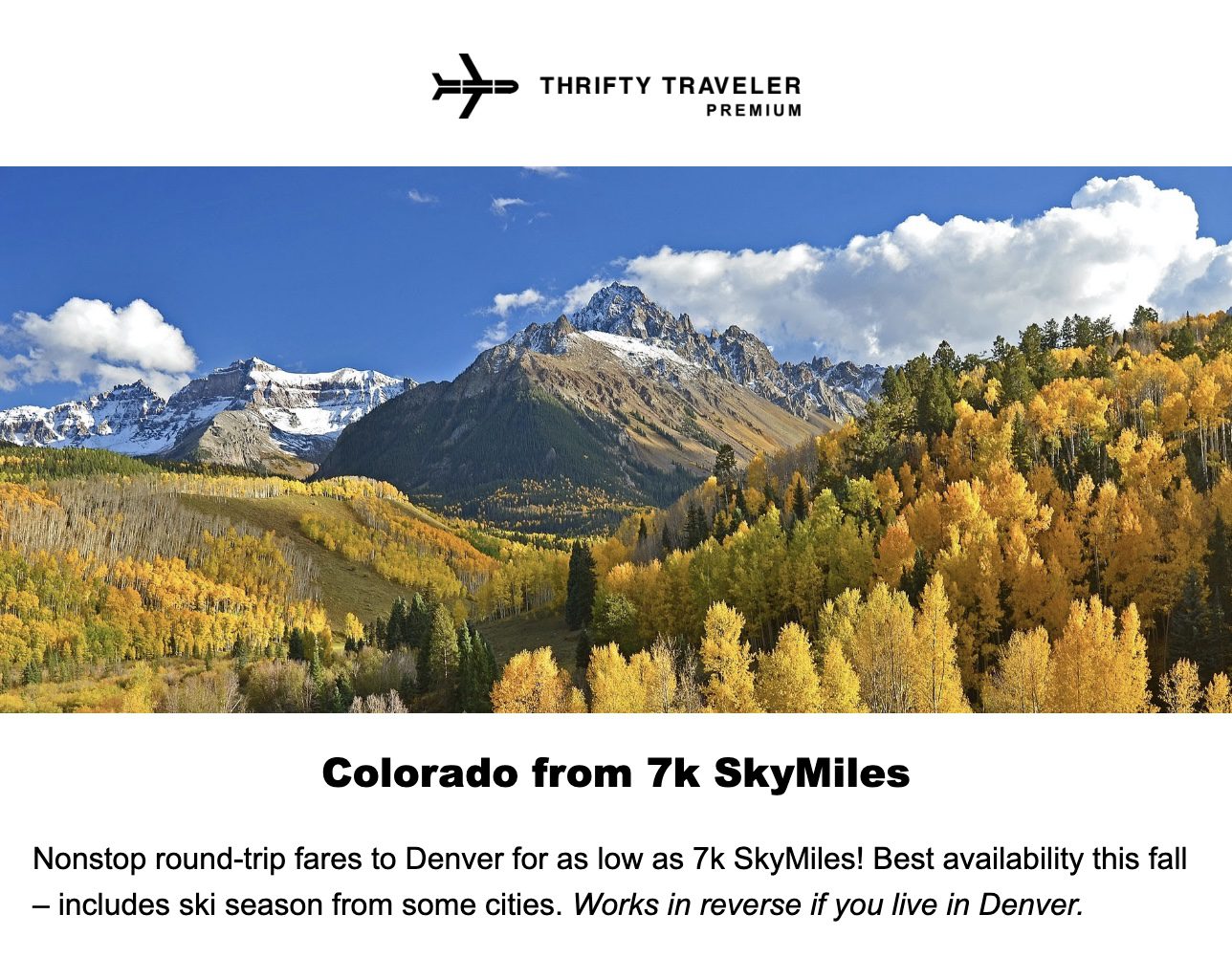 And that's just the last few weeks. Over the last couple of months, there were plenty more amazing SkyMiles deals like…

I know, nobody likes a showboat … I'll stop now.

Nationwide to Europe for 32k SkyMiles!

Think you can't put your SkyMiles to use from your home airport? Think again.

Just a few weeks back, we found that massive, unpublished SkyMiles flash sale to Europe for 32,000 SkyMiles … roundtrip. That's less than half of what most airlines charge for a trip over to Europe and back.

These rates are long gone now – the hotter the deal, the shorter it lasts. But when it first cropped up earlier this month, you could find those dirt-cheap rates from almost every airport in the country, big and small. It didn't matter whether you were searching from the big airports like Atlanta (ATL) or New York City (JFK), midwestern hubs like Minneapolis-St. Paul (MSP), or even small cities like Fargo (FAR), Boise (BOI), Milwaukee (MKE), and 100-plus more.

Whether you wanted to head to Rome (FCO), Paris-Charles de Gaulle (CDG), Amsterdam (AMS), London-Heathrow (LHR), or almost anywhere in Europe, here's just how few SkyMiles you might have needed…

These ultra-low award rates are gone now – get the next insane deal in your inbox with Thrifty Traveler Premium+!

How to Earn Delta SkyMiles for the Next Deal

There is truly no better way to use your SkyMiles than these sales and deals. And if you don't already have some stashed away, this should convince you that they're absolutely worth earning.

The easiest way to pile up SkyMiles is by opening a Delta SkyMiles American Express co-branded credit card. These cards are currently offering up to 50,000 SkyMiles after spending a certain amount within three months – but we've seen those welcome bonuses as high as 100,000 SkyMiles, so it's probably worth waiting.

Keep in mind that there's no restriction against opening all three of these Delta co-branded cards: the Delta SkyMiles Gold, Delta SkyMiles Platinum, and Delta Reserve card. Timing it right and being responsible with your spending could give you a large sum of SkyMiles to work with. 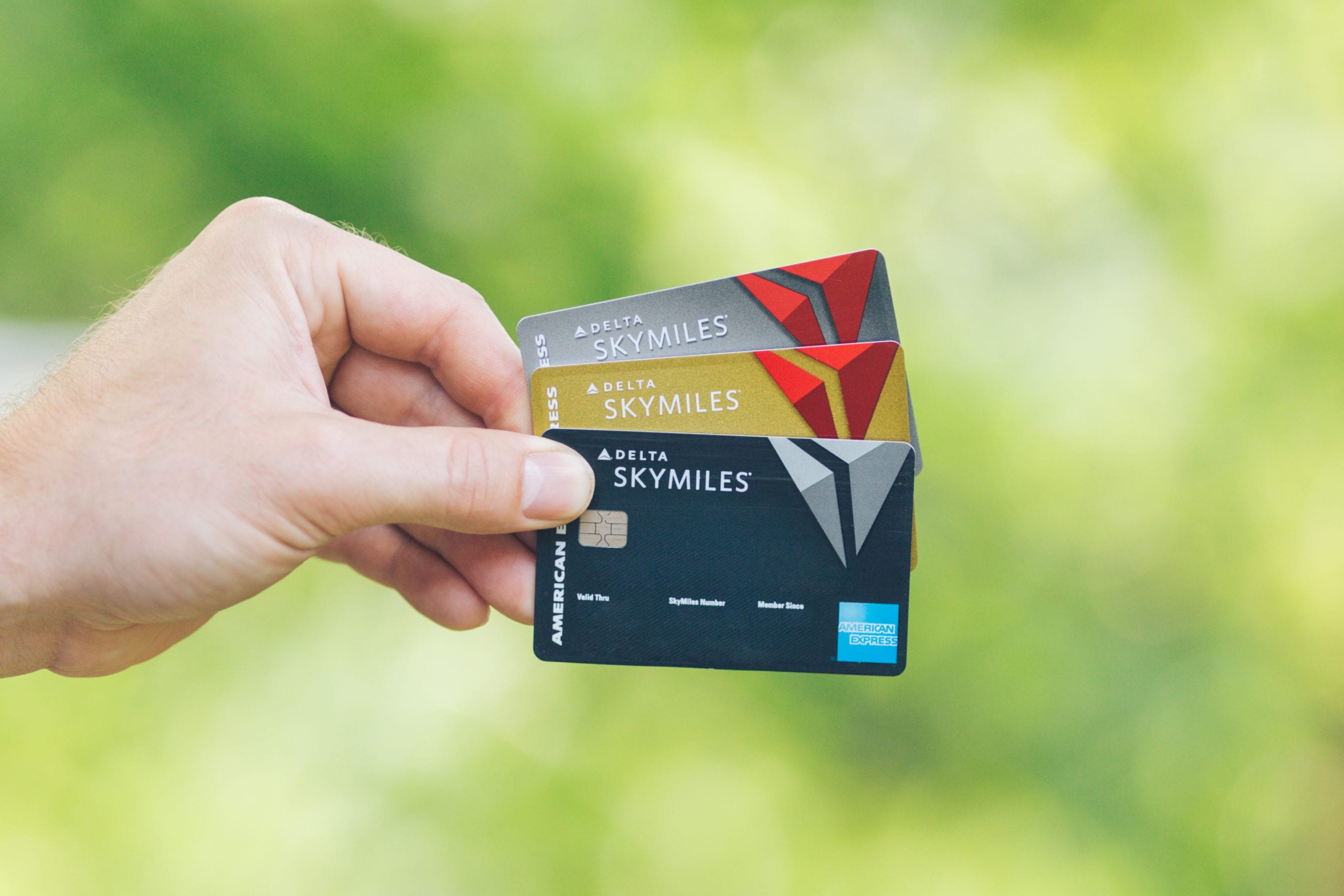 Read our guide to deciding which Delta credit card is right for you!

When you see the next Delta SkyMiles flash sale, you can immediately transfer the points you need to your Delta account. These points transfer on a 1:1 basis, so 30,000 Amex points will give you 30,000 SkyMiles.

Delta also offers a few different ways to keep padding your SkyMiles balance. You can earn SkyMiles on your online shopping, while dining out, taking a Lyft ride, or using the grocery delivery service Instacart.

Read more: All the Best Ways to Earn Delta SkyMiles

SkyMiles can get a bad rap, but deals like these are simply unbeatable.

Don't miss out on the next amazing way to use your SkyMiles to fly to Europe, Tahiti, Australia, Mexico, Asia, and beyond. Sign up to try Thrifty Traveler Premium+ and you'll be the first to hear about it.