Flyover? No, Fly for Less! The Cheapest Flights We've Found from Smaller Cities
Skip to content

Living in smaller cities doesn’t have to mean sky-high prices … or driving to a major hub in the name of a better deal. Live in Fargo? Aberdeen? Bemidji? Greenville? There are still flight deals out there.

While they may be less frequent and harder to find, cheap flights from smaller regional airports around the country do, in fact, exist. We search for flight deals from over 160 U.S. and Canadian airports – and yes, that includes your home airport. And we’re already seeing cheap fares for travel this year through February 2022.

But what’s considered a “cheap flight” from these smaller cities? And just how low can prices go? Buckle up, “flyover” towns: See for yourself.

There’s truly nothing we love more than a nationwide flash sale to Europe. And while Europe remains closed to most travelers, there’s hope on the horizon – and cheap flights! – for later in 2021.

One flight deal, in particular, was available from over 100 U.S. and Canadian cities for peak summer – starting as low as $241 roundtrip! Yep, that’s $600 off average fares from small towns to Europe.

Here’s a look at the flight deal alert that was sent to Thrifty Traveler Premium members when this deal dropped: 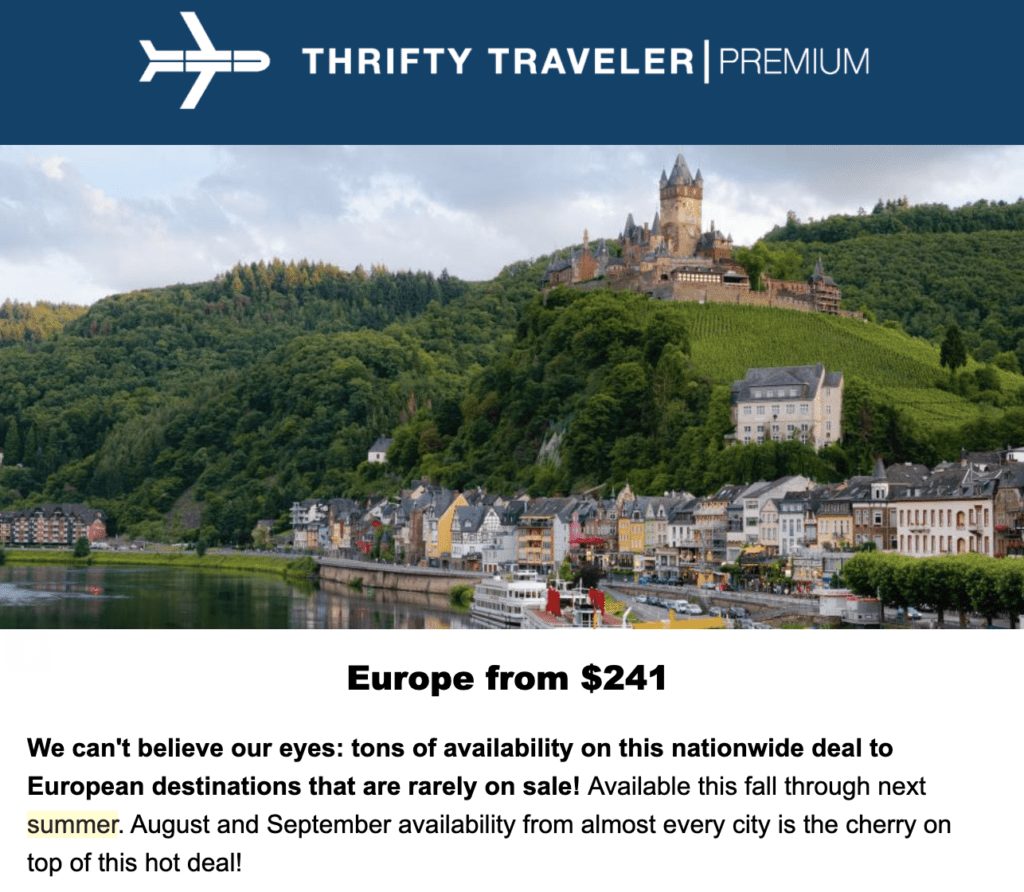 Want cheap flights like this one delivered straight to you? Try Thrifty Traveler Premium for $5.99 a month!

The best part about this deal? Not only was it available from nearly every airport, but it had widespread availability into most major European cities as well! The hardest part about this flight deal was picking which one to see… The list of departure cities you could fly from for under $500 roundtrip went all the way down to Williston! We heard from tons of Premium members in towns big and small who booked this European deal.

Ready for a little adventure? Iceland is open to travelers, and flights are cheap for peak summer and fall travel! Yes, even from your hometown. Take a look at this recent flight deal we found from 80+ cities with savings of $300+ flights!

While the screenshot above ends at Duluth (DLH), the flight deals didn’t. Here are a *few* other cities included in this one deal: It’s not just international flights where you can score big savings. We’ve been finding cheap domestic flight deals daily for as low as $49 roundtrip – even from regional airports. Is Alaska on your bucket list? It doesn’t have to cost and arm and a leg to get there. This nationwide sale from over 100 U.S. cities to Anchorage under $298 was a huge hit with Thrifty Traveler Premium members! 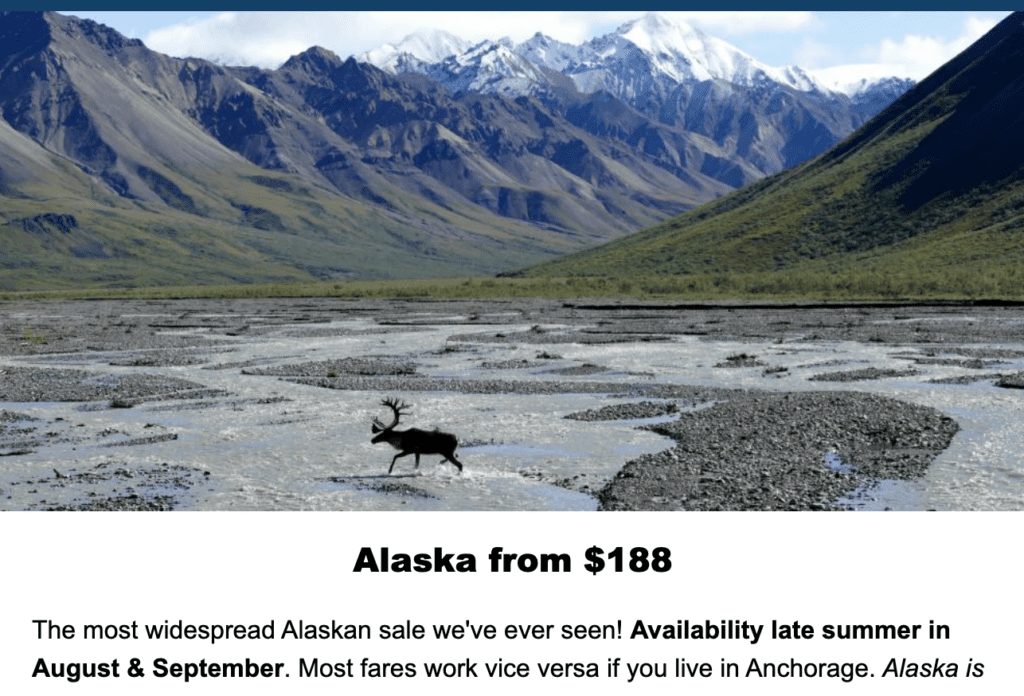 Here’s a taste of the prices this deal was live from nationwide:

Tropical Getaways From Your Hometown

Flights from small towns across the U.S. to Hawaii can often cost $1,200 – or more. But not if you time it right!

If Hawaii is on your bucket list, this one’s for you. This nationwide flash sale we found and sent to Thrifty Traveler Premium members weeks ago was under $400 roundtrip from ALL U.S. cities! Check it out: 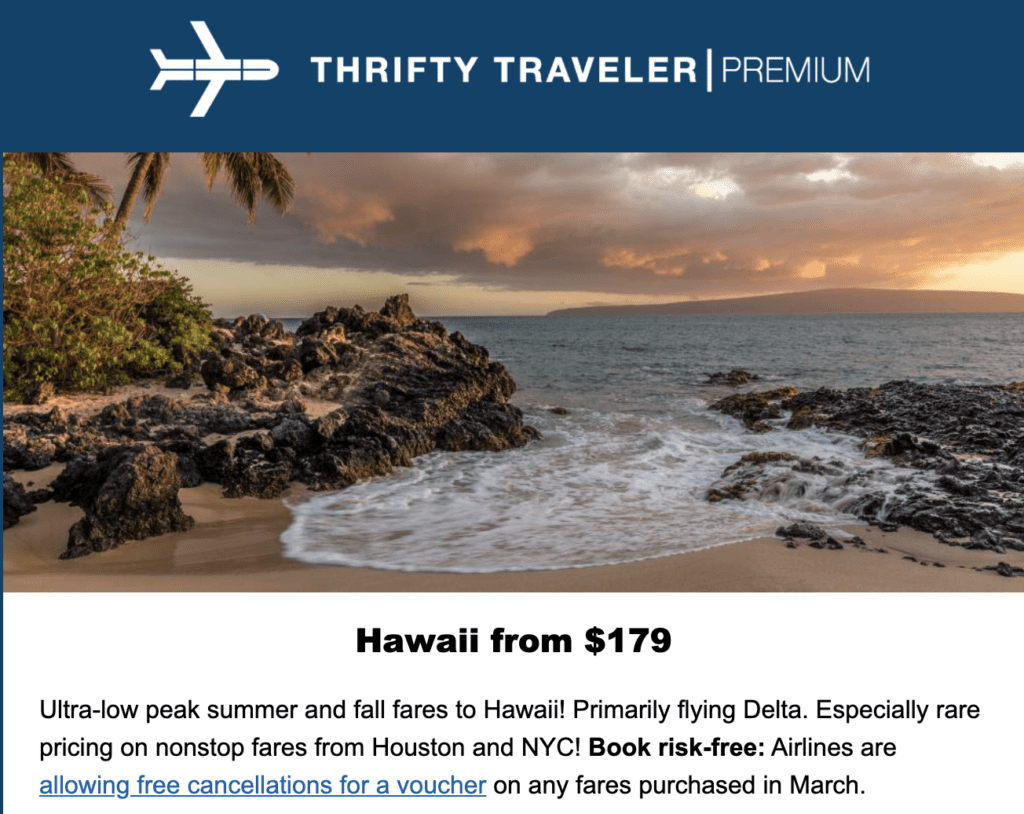 Here’s what roundtrip flight prices looked like from some small cities:

And yes, “flyover states” get cheap flights to places like Costa Rica, too! You could have booked this deal we found last month from over 100 cities for under $285 – roundtrip: Try Thrifty Traveler Premium for just $5.99 a month and get the next deal from your home airpor we find!

Yep, these were over $600 off regular airfare to Costa Rica! Here’s what roundtrip flights were at from a handful of the cities included on this deal:

You can hardly fly from Sioux Falls to Chicago for those prices! Eau Claire to Wisconsin for the price of a typical flight to New York? Yes, that’s real.

Living in a smaller town doesn’t mean you have to give up on your dreams of seeing the world. In fact, some of the best deals we’ve ever found have included regional airports! Take this deal to Thailand we found back in 2019, for example: This deal was live from over 50 cities to Bangkok, Thailand from as low as $496 – roundtrip. Flights from towns like South Bend to Thailand are usually well over $1,300 – not $700! Oh, and that’s flying a 5-star airline during peak season, too.

Another major bucket list destination that’s usually crazy expensive? Tahiti. But that doesn’t make us want to go any less! Normally, flights to Tahiti can cost well over $1,500 – especially from smaller airports. A few months back, we uncovered a nationwide flash sale to Tahiti with ALL flights under $893 roundtrip! That’s savings of $500 or more: 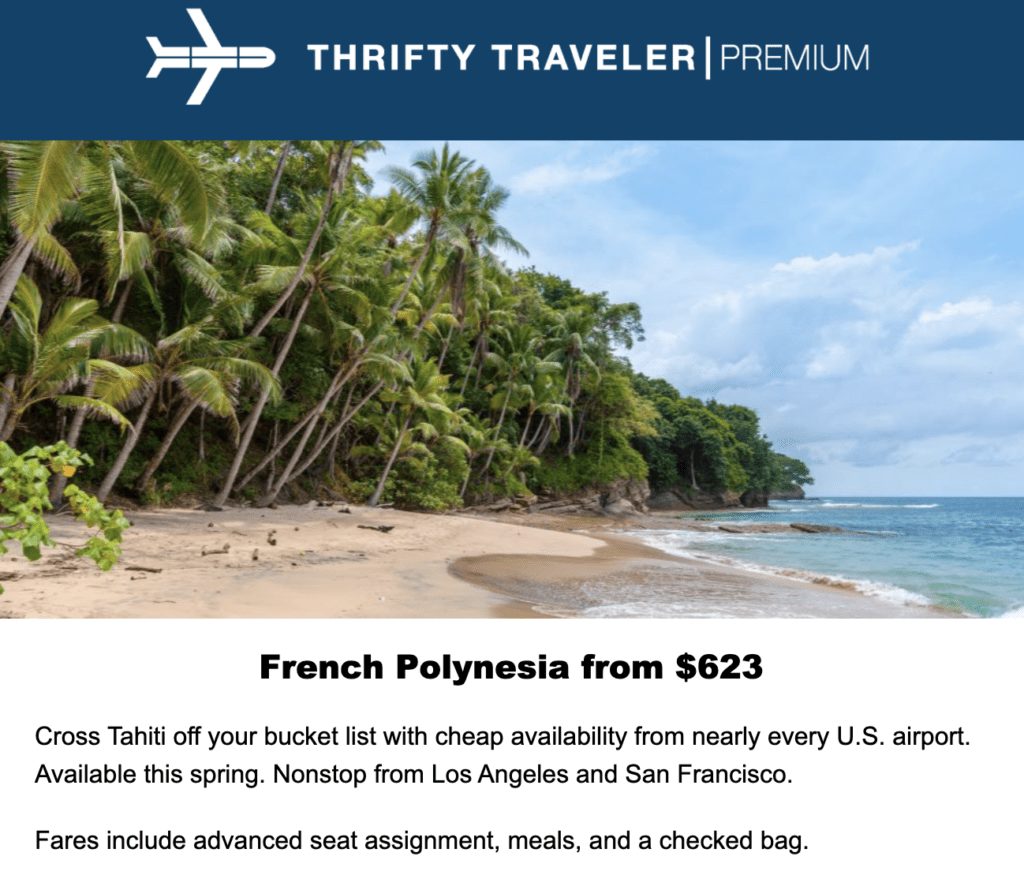 It’s time to stop paying too much for airfare and get back out into the world – this summer, fall, or even winter 2022!

Most of these deals are no longer live: The hotter the deal, the shorter they last! But if you’re looking for the next cheap flight from your home airport, we’ve got you covered. Join Thrifty Traveler Premium and get instant notification of the next flight deals we find for you.