Delta Air Lines has confirmed it won’t resume its long-haul flights from Minneapolis-St. Paul (MSP) to Europe and Asia until spring 2021 at the earliest, and airport officials don’t expect other airlines to bring back international flights to Europe until at least next summer.

The lucrative long-haul flights to London-Heathrow (LHR), Amsterdam (AMS), Reykjavik (KEF), Tokyo-Haneda (HND), and beyond have all been on pause since March, when the coronavirus pandemic brought nearly all international travel to a screeching halt. Outside of some limited flights to Canada and Mexico, no international flights have returned to the Midwestern hub – and some have even been permanently scrapped.

Ailevon Pacific is an aviation consultancy hired by the airport’s governing board, focused now on helping the hub recover from the coronavirus crisis. Brad DiFiore, the firm’s managing director, told Minneapolis airport officials that Delta and partners like KLM and Air France won’t resume international flights until next spring. For others like Icelandair, Condor, and Aer Lingus, it may take even longer.

“At this point, all signs are pointing to spring of 2021 for the return of any Delta or Delta partner long-haul services,” DiFiore told the Metropolitan Airports Commission board on Monday. “Our three European carriers that are not Delta partners have all advised that they don’t anticipate returning until summer 2021.”

Delta confirmed on Friday that it doesn’t plan to bring back international flights to London-Heathrow (LHR), Amsterdam (AMS), Paris-Charles de Gaulle (CDG), Tokyo-Haneda (HND), and Seoul-Incheon (ICN) until late March 2021 at the earliest. And Delta’s nonstop flight to Reykjavik (KEF), started back in 2016, appears to be gone for good.

Other carriers like KLM and Icelandair are still selling tickets for their own international flights for travel beginning this fall. But carriers are continually altering their schedules and canceling more flights as the pandemic drags on. 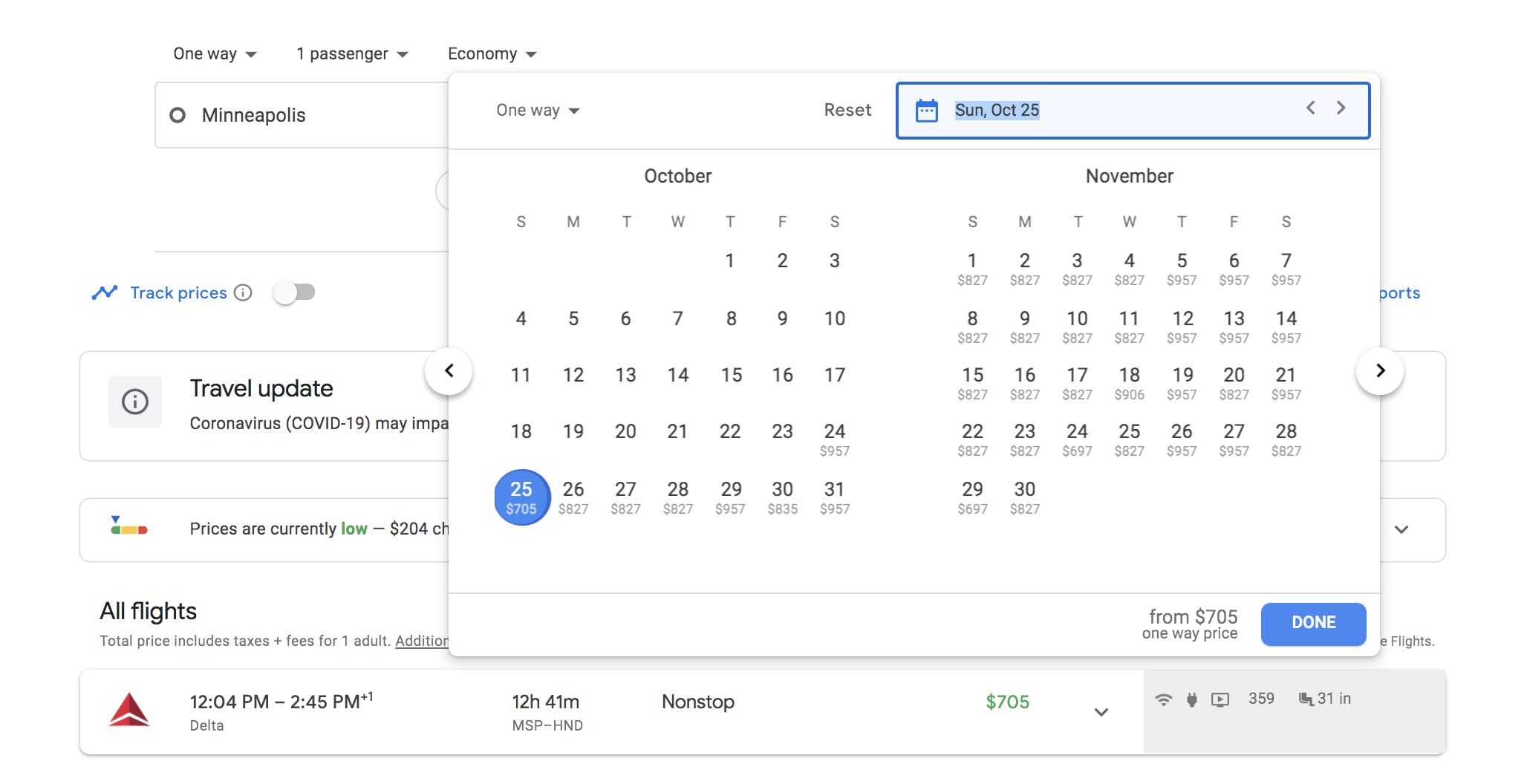 Delta is still selling seats on the flight from Minneapolis to Tokyo starting in late October, but almost certain to be pushed back

“There is very limited demand for long haul flights right now due to government requirements for U.S. passport holders to quarantine upon entering most countries,” DiFiore explained in a statement to Thrifty Traveler. “Airlines aren’t interested in restarting long-haul services during the traditional off-peak season, so it makes sense that airlines are likely to wait till spring to bring back long-haul services.”

Until then, flights from Minneapolis to Europe and Asia will have to funnel through massive U.S. hubs like New York City (JFK), Atlanta (ATL), Dallas-Fort Worth (DFW), and Chicago-O’Hare (ORD), where some limited international flights have already resumed.

Minneapolis on the Map

Coronavirus has decimated the travel industry – and international travel in particular. Despite steady growth since the spring, travel is still down by roughly 70 percent. Hundreds of routes have been cut as carriers shrink. Airlines have warned they don’t expect to return to normal until 2023 or 2024.

But the COVID-19 pandemic has been particularly harsh for Minneapolis after a banner year in 2019. A major Delta hub, Minneapolis landed three brand new international routes to Seoul-Incheon (ICN), Mexico City (MEX), and Dublin (DUB) on Aer Lingus in 2019 alone. Delta initially planned to launch service to Shanghai this year, too.

Now, the airport is fighting to get those routes back – along with longstanding international flights, too. Aer Lingus has scrapped its brand new flight to Dublin altogether, with no promise it will return. Delta has also removed all its flights between Minneapolis and Mexico City from its schedule.

Data on business travelers was pivotal in getting those routes in the first place. And DiFiore told airport officials that’s what will drive their eventual return.

“Much of what supports international long-haul flying is business cabin demand. It’s really corporate travel that is going to define how quickly and how robustly international air services come back,” he said.