Years ago, Delta Air Lines CEO Ed Bastian promised the airline would make high-speed Wi-Fi free for all, eventually setting a goal to launch by the end of 2019. Tech hiccups and the pandemic may not have done the airline’s promise any favors, as Wi-Fi is still not available for free on Delta flights. But the airline is still making strides with in-flight internet service.

Back in April, Delta cut its exclusive ties with inflight internet operator Gogo and began a new partnership with Viasat. While that may sound boring, it’s a huge change: It means much faster internet at far cheaper prices on Delta flights. Delta committed to adding new Viasat service to more than 300 domestic planes by the end of this year, with plans to equip its entire domestic fleet by the end of 2022.

Months after launching, I finally got on a plane equipped with Delta Viassat Wifi on a recent flight from Minneapolis-St. Paul (MSP) to San Diego (SAN). Did it live up to Delta’s hype of faster, cheaper internet? Read on.

How Much Does Delta Viasat Wifi Cost?

While Delta still has aspirations to make the new Viasat Wi-Fi free for all passengers, that is currently not the case. But it is much cheaper.

This new service costs just $5 for an entire flight. That is a marked improvement over Delta’s old Gogo 2ku high-speed Wi-Fi service which could cost $16 to $30 for a single flight.

On top of that, Delta still offers free messaging, which should allow you to send and receive text messages by connecting to the Wi-Fi during your flight. 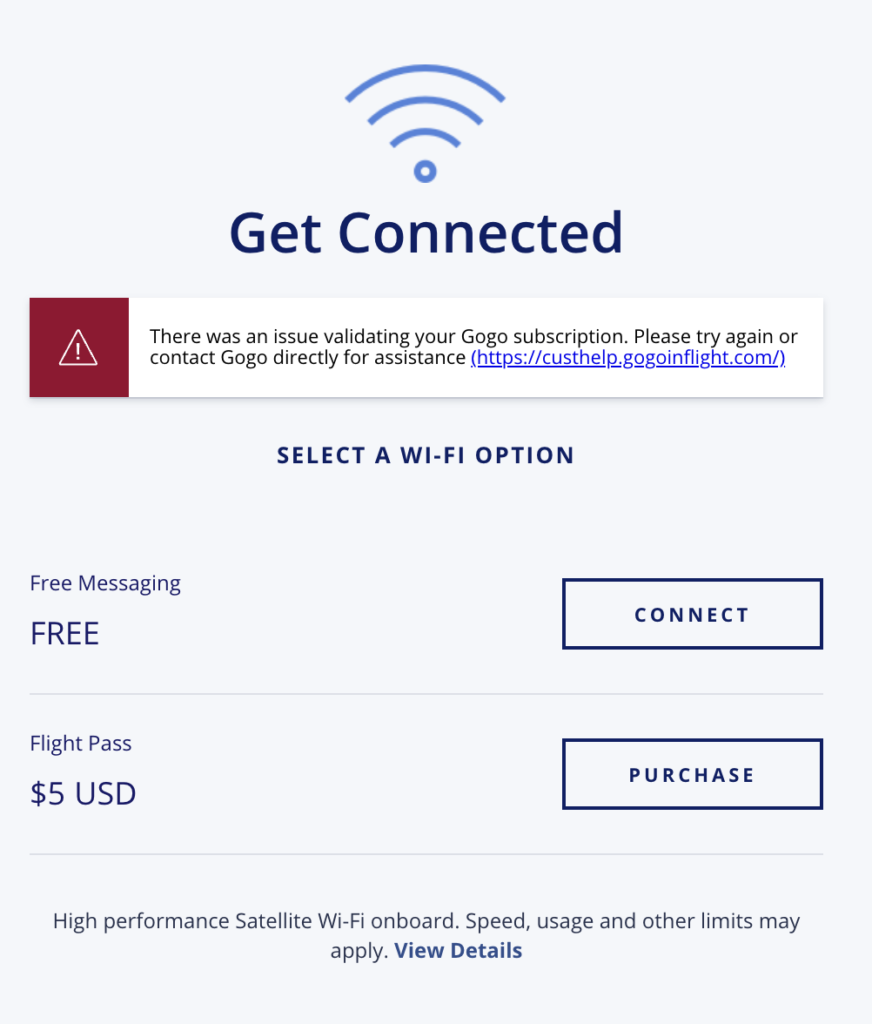 Still, $5 is not free. So what does this mean for Delta’s plan to offer free Wi-Fi to everyone?

Those plans clearly hit a snag in the last two years – well before the pandemic. At the end of 2019, Delta ran a brief trial of free Wi-Fi to test the waters. Would the satellite internet onboard be able to keep up with demand once connecting was a free-for-all?

The answer was a resounding no. Once they made it free, speeds became sluggish – if not unusable. That’s what eventually led Delta to pair up with Viasat for Wi-Fi on many domestic flights in the first place.

Delta’s new timeline on when free Wi-Fi for all is not clear, but the airline has insisted it’s still in the works. Stay tuned.

Which Planes Have the New Delta Viasat Wi-Fi?

Earlier this summer, Delta started adding Viasat Wi-Fi to some of the planes you’ll find flying throughout the U.S.

Currently, if you are flying on one of these aircraft, there is a decent chance you’ll have access to the new satellite Wi-Fi service. Delta plans to have all of its domestic fleet equipped with Viasat service by the end of 2022.

As you are boarding your flight, there is a quick and easy way to know if your plane has the new Viasat Wi-Fi onboard. Last week on my flight to San Diego, I was flying on a newly retrofitted Airbus A321. And as I approached the boarding door from the jetbridge I noticed a big sign on the lower right-hand side of the door. 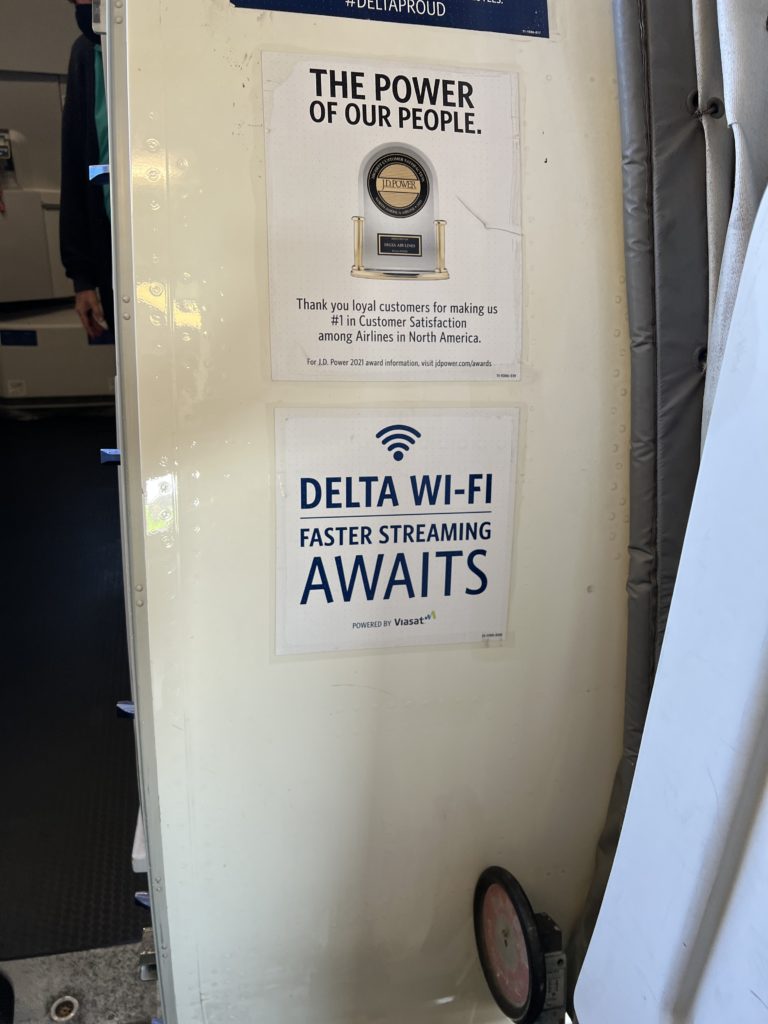 Once we climbed to 10,000 feet, I pulled out my laptop to connect to the new Viasat Wi-Fi. The process is quick and easy and once I got connected, I started running a few internet speed tests to see just how fast the connection was.

Throughout the flight, I was consistently pulling over 30 Mbps and a few different times I even topped out over 40 Mbps. For an inflgiht Wi-Fi connection, that’s impressive.

According to the speed test, my connection “should be able to handle multiple devices streaming HD videos at the same time.” No doubt my connection was blazing fast, and noticeably faster than anything I’ve experienced on other Delta flights.

For reference, according to the FCC, internet with download speeds above 25 Mbps is considered to be high speed. 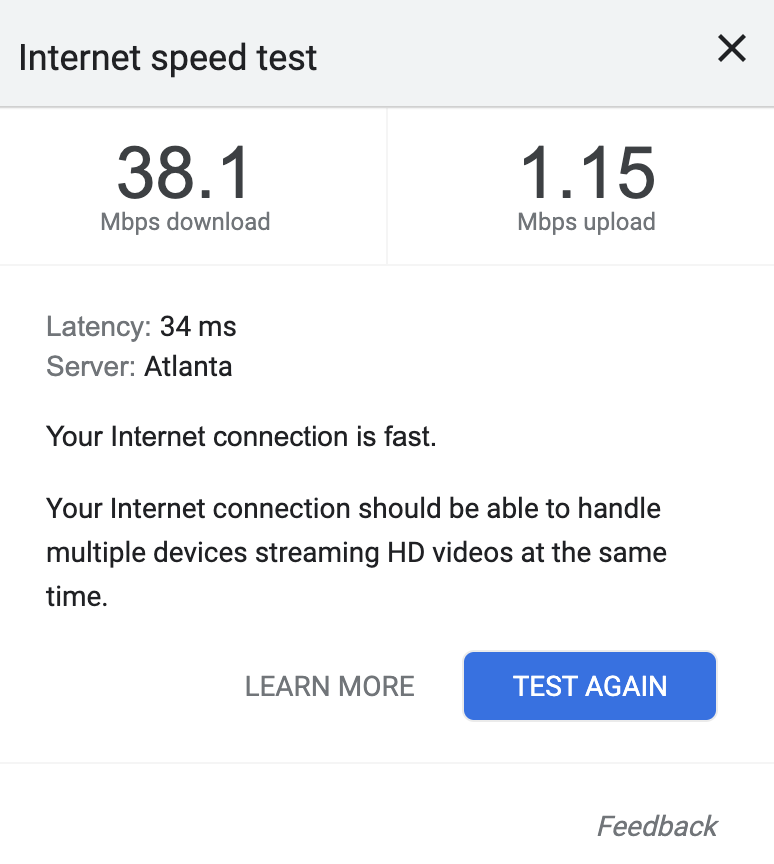 The experience itself wasn’t noticeably different from the old Gogo internet service Delta has offered, but one thing was: the price. At just $5 for an entire flight, it’s substantially cheaper than the $15 to $30 Delta charges for Gogo service. That price tag was a major deterrent for many travelers.

Although Delta plans to eventually make it free, I think $5 for an entire flight is very reasonable. I’d even go so far as to say that I wouldn’t be mad if Delta backed away from its plans to make it free and continued charging $5. While a noble goal, free Wi-Fi would ultimately mean more users onboard, likely dragging down speeds.

It remains to be seen if Delta can make Wi-Fi free and truly provide a good experience. But for now, I was more than happy with the experience I received for $5.

Delta’s new Viasat Wi-Fi service is slowly rolling out to many planes in the airlines’ domestic fleet. Delta plans to have almost all of its planes equipped with the new service by the end of next year.

While the service still isn’t free, the airline is only charging a very reasonable $5 per flight for speedy internet. And that’s a win in my books.