Move Over, Acropolis: You Have to See the Ruins at Baalbek in Lebanon
Skip to content


When you think ruins, you think of the Acropolis in Athens, the Colosseum of Rome or maybe even the French amphitheaters in Arles or Nimes.

But you’ll find the largest and best-preserved Roman temples of the world in … Lebanon. You’re looking for the ruins at Baalbek. Once known as Heliopolis, Baalbek is situated just miles from Lebanon’s border with Syria, making them the least-visited ruins in the world.

You’ll find three temples dedicated to Venus, Jupiter, and Bacchus, all built on a massive platform with courtyards, statues, fountains, and other buildings. And these temples are the most awe-inspiring ruins we’ve ever seen, with its construction shrouded in mystery. Add them to your bucket list.

Thrifty Tip: Visit Baalbek with a tour group. The ruins are overwhelming in size and you will get the most out of it with a knowledgeable guide. The location near the Syrian border means going with a tour group will make you feel more comfortable. We recommend Nakhal tour company and this full day tour.

A Brief History of the Baalbek Ruins

So why Lebanon? At the peak of the Roman Empire, its reach stretched from Western Europe all the way through much of the Middle East and down into a sliver of northern Africa, including Egypt. And Lebanon was right in the middle of critical trade routes from Asia.

Not far from the critical port city of Byblos (the longest inhabited city in the world) along that route you find Baalbek, nestled between two mountain ranges in the Beqaa Valley. It’s here, around 150 B.C., that the Romans built their temples over an existing (and much smaller) Phoenician temple.

These grandiose temples had a tumultuous history. By the reign of Constantine in the 300s AD, the temples were repurposed for Christianity. Fast forward to 640 A.D, and a mosque was added under Islamic rule. And by the 1500s, the ruins were in decline as the Ottoman Empire spread to the area. The temples were largely forgotten for centuries, left to be destroyed by earthquakes and storms.

But in 1898, Kaiser Willhelm II of Prussia visited Baalbek and pioneered an archeological dig and restoration of this site. Nearly 100 years later in 1984, Baalbek officially became a UNESCO world heritage site.

The Sheer Size of Baalbek

Baalbek isn’t just the largest complex of ruins in the world. The marble and granite stones and pillars themselves are among the largest archaeologists have ever seen. How it was all built remains a mystery today.

It’s tough to convey just how big these temples and the whole complex are. All three temples are built on a 16-foot-high platform with a podium, a large staircase, and protective walls. The largest of these walls has a second row called “Three Stones,” each over 62 feet long, 14 feet high, and 12 feet wide – all carved in one piece! They each weigh around 1,100 tons.

The Temple of Venus

The Temple of Venus is the youngest temple of the trio, added sometime in the 3rd century to represent love, fertility, prosperity, beauty, and victory. Sadly, it was destroyed under Constantine and replaced by a basilica. By the 18th century, it was used as a Greek Orthodox church.  Stop and look at what is left of the church before you enter the archeological site. 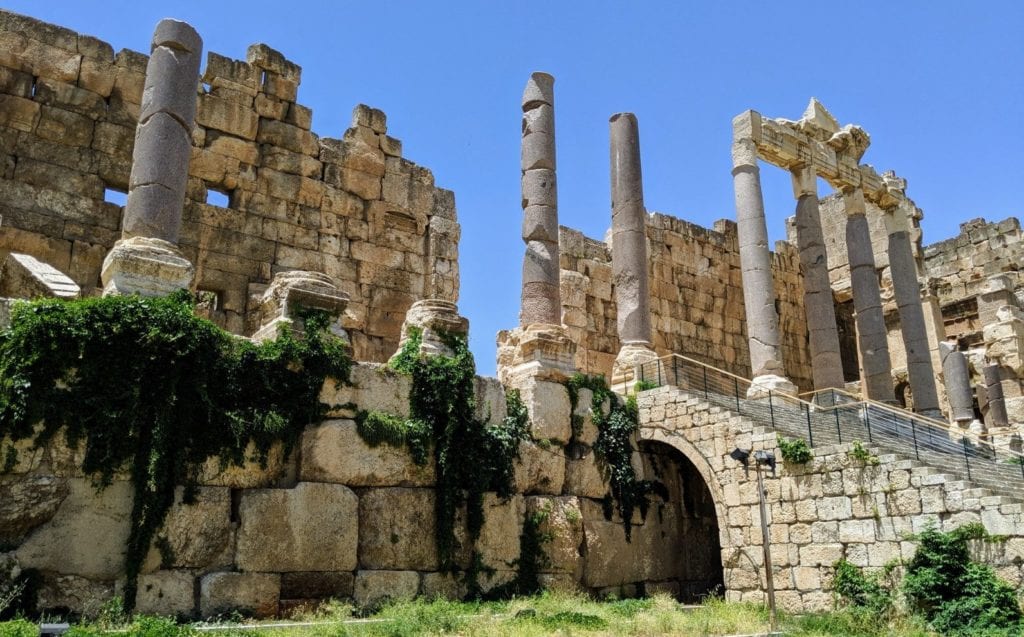 The Temple of Jupiter

Walk up the large staircase to enter the complex, then head through another entrance into the great court. At the far end of the court, you’ll see what remains of The Temple of Jupiter, worshipping the god of sky and thunder.

It was built using 54 columns, just six of which remain. Eight of the original columns were removed by Constantine and used in the construction Hagia Sophia in Constantinople, current day Istanbul. The rest are believed to have been destroyed by earthquakes and storms. 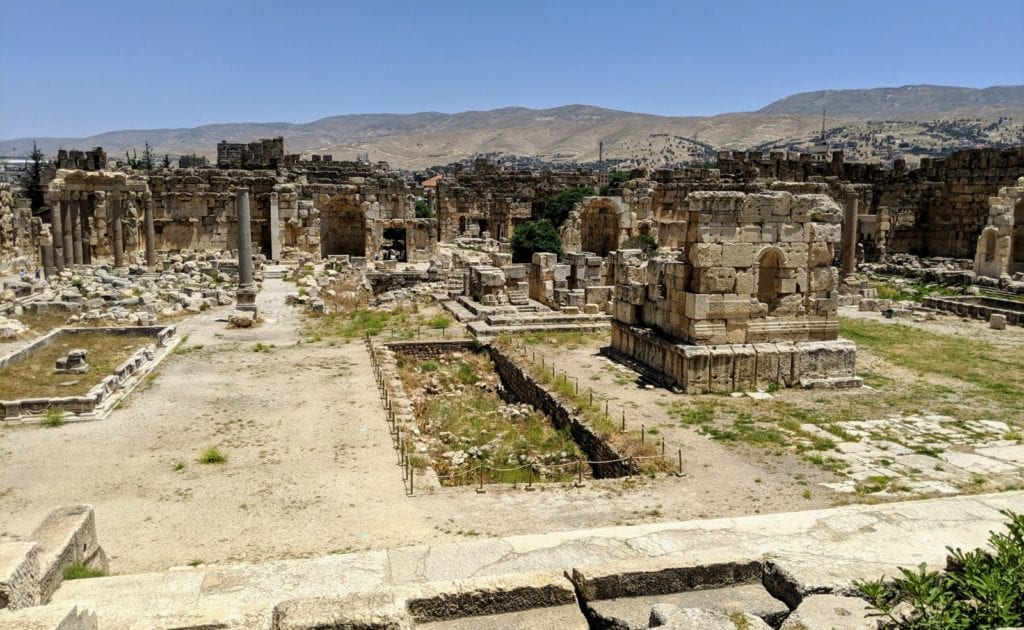 Notice the pink granite columns around the courtyard? These columns were shipped in one piece from Answan, Egypt – nearly 1,000 miles away. There were shipped up the Nile River, ferried across the Mediterranean Sea, and then transported over the mountains to Baalbek. 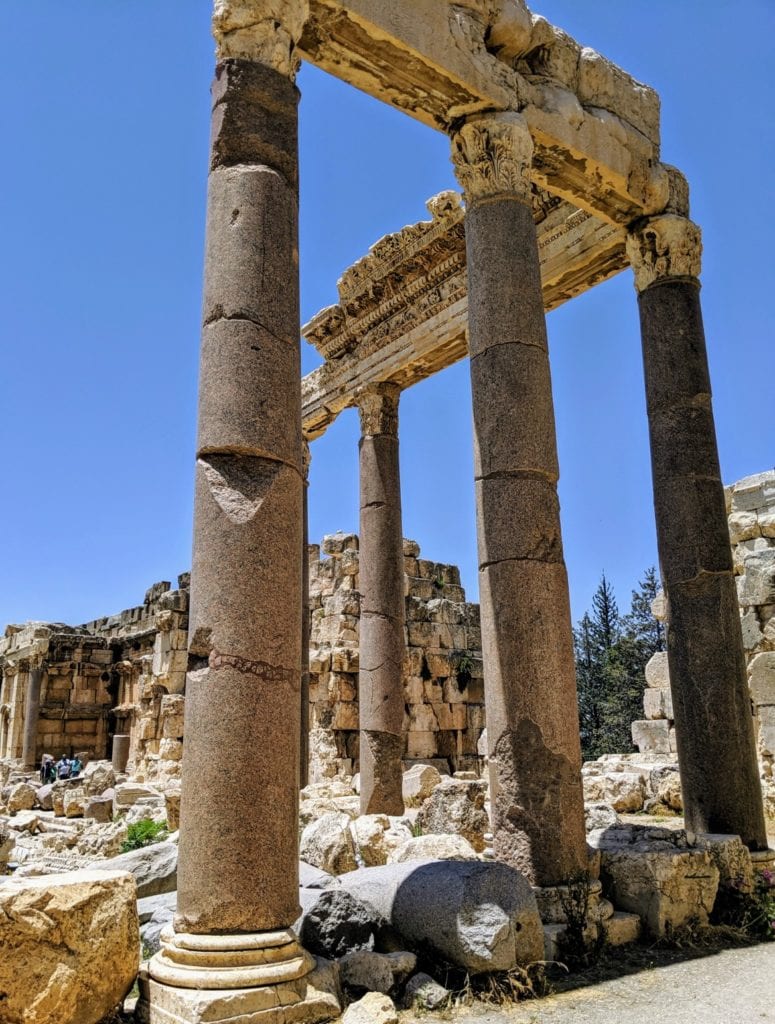 The Temple of Bacchus

The Temple of Bacchus is the largest standing and best-preserved Roman temple in the world. Just how big is it? Look at the people at the center of the temple – if you can see them. It’s that large!

Bacchus is perhaps best preserved because it sits one level below the Temple of Jupiter. The earthquakes hit Jupiter harder, forming a protective ring of rubble to prevent further damage to Bacchus. 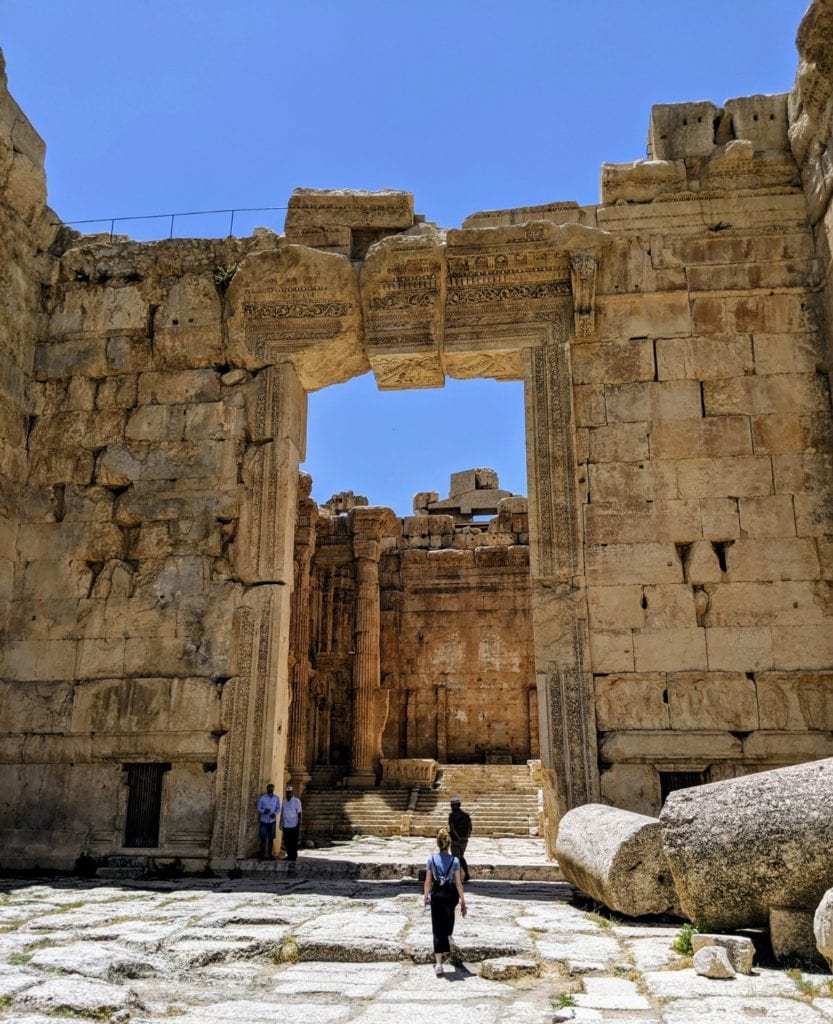 Don’t forget to look up! There are little details everywhere that were uncovered and preserved by archeologists. 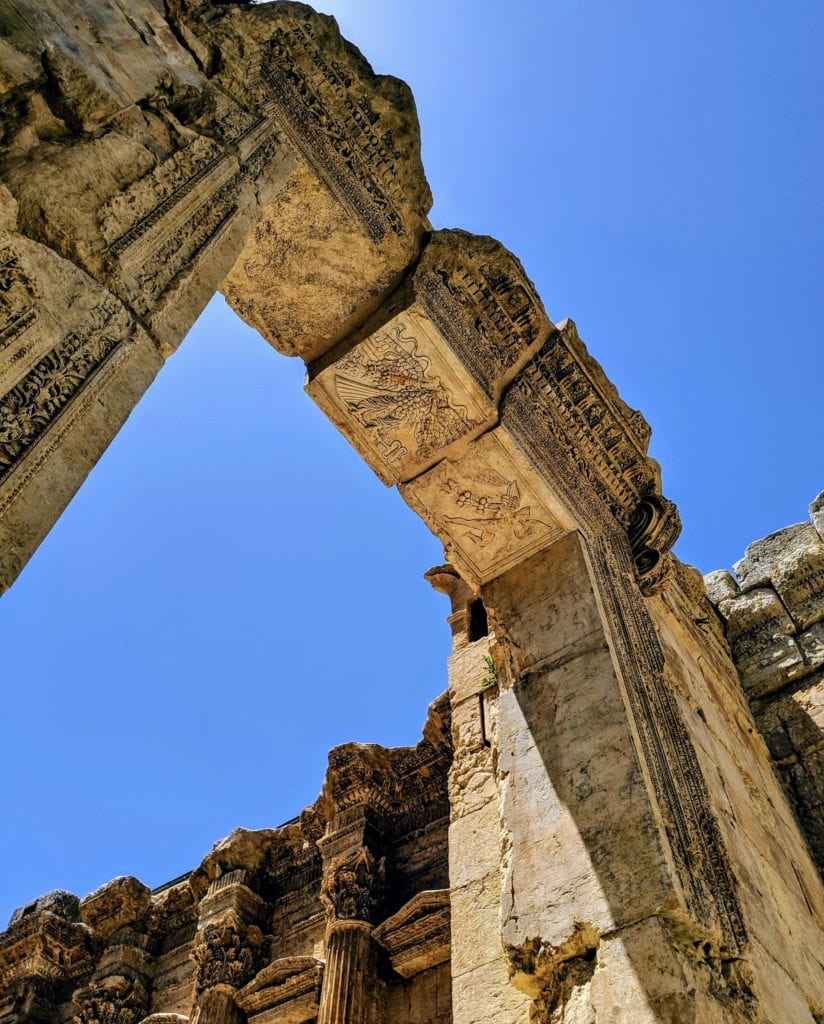 Thrifty Tip: Don’t miss the museum located in the large Roman hallways, once used to store food and wine. Besides being a well-organized museum with a very interesting and complete history of the temples, it’s very cool inside! This is a welcome break from the hot sun.

Pictures cannot do Baalbek justice. This is one of the most awe-inspiring places I have been to. If you love history, visiting Lebanon and a trip to Baalbek should be on the top of your list!