Hotel Review: InterContinental Minneapolis Airport (MSP)
Skip to content
This post contains references to products from one or more of our advertisers. We may receive compensation when you click on links to those products. The content on this page is accurate as of the posting date; however, some of the offers mentioned may have expired. For more information check out our Advertising Disclosure.

When you think of your average airport hotel it brings to mind some of the most depressing hotels anywhere. From the tired furnishings to the long hotel shuttle rides, there are few airport hotels which get us excited for an upcoming stay. The InterContinental Minneapolis Airport at MSP hopes to change that perception.

Two of our favorite newer airport hotels include the Westin Denver International Airport and the Crowne Plaza Singapore. The best feature of both hotels is they are directly connected to the airport. A feature which is rare in the industry.

I was excited to hear in 2017 that my home airport in Minneapolis-St. Paul (MSP) would be getting its own hotel connected to Terminal C. In August, the InterContinental Minneapolis airport opened its doors to the public and we were invited to a pre-opening preview in July 2018.  Later, Mrs. TT and I stayed a night in October. The hotel itself is a beautiful property and it has almost everything you could ask for in an airport hotel, including its own dedicated TSA checkpoint. There are a few areas of concern and we’ll cover them shortly.

There are several options for accessing the hotel including access airside through the airport via Concourse C. If you are arriving outside of airport security via car the hotel entrance is near the exit of the airport after passing through the arrivals or departure area. Alternatively and a little easier – you can access the hotel by car is via the Post Road. There is dedicated parking in the ramp directly adjacent to the hotel.

The lobby itself is spacious and it’s open to the 2nd-floor conference area. There is also a coffee bar located across from the check-in counter.

The 3rd floor of the hotel has a dedicated checkpoint which is connected to Concourse C via a short skyway. The checkpoint offers TSA PreCheck but it is the hybrid version where you still have to remove your electronics. Anyone can visit the hotel while airside and then go back through security at the checkpoint. There is never a line so this checkpoint is a hidden gem.

The only downside is there are currently limited hours for the checkpoint but it is usually open until at least noon. If the checkpoint is closed the hotel will take you via shuttle to the airport’s main departure entrance.

You do not need to be a guest to access the spa and restaurants on the hotel’s premises. The hotel spa and gym are located directly across from the checkpoint.

We were assigned a standard King room which was nicely appointed and had all the important features I look for in a new hotel including plenty of plugins for all my devices. One of the first questions I had was how much noise will I be able to hear from the runway? Thankfully all the windows in the building feature triple pane glass which made the airport noise a non-issue. Overall the amenities in the room were fantastic and the bed was comfy. The build quality of the room was solid, especially the fixtures and lighting in the bathroom.

There is a selection of local beer and spirits for a fee. There are complimentary Nespresso offerings as well. I considered buying a bottle of sparkling water but there was no bottle opener in the room. There are three restaurant spaces in the hotel but only Bradstreet Crafthouse and La Voya Brassiere, located on the ground floor, are currently open. The top floor Altitude bar space is finished but it is currently only being used as an event space. La Voya Brassiere is a stunning space, with plenty of ornate and unique features. The menu is French with Minnesota influences. Our meals and drinks were average with generally no complaints. The real issues related to staff training. Two of the three staff members stated they had not had several of the dishes, cocktails, or wines. This is a newer restaurant but you’d still expect the staff to have at least tried what is on the menu.

All three staff members were friendly but one did make three odd comments about Mrs. TT being attractive, which was weird and uncomfortable. The same server also spent 10 minutes while we were trying to get our bill lingering at a nearby table. Mrs. TT and I usually let most things slide but our experience was pretty poor on the service front. Overall the serving staff seemed inexperienced and in need of training.

Bradstreet Crafthouse is a great space to get some food and a beer or cocktail. There are also some local flavors featured as Bradstreet has collaborated with Tattersall to create unique local cocktails. They also have plenty of board games to help pass time. This would be a fun place to spend a longer layover if you’d like to get out of the busy airport for a few hours.

The Altitude bar is located on the 12th-floor penthouse level. It was not yet open as a bar space but it does have amazing views of the airport. Anyone can access this level from the main floor elevators. I’d highly recommend checking it out.

The gym and Elevations Spa and Thermal Pool are conveniently located right next to the TSA Checkpoint on the 3rd floor. You do not have to be a guest to make use of the spa and I believe you can pay to use the gym and showers as well.

Mrs. TT spent most our afternoon at the spa and she said it was the best part of our stay. The staff was knowledgeable, friendly, and most importantly she had a great massage.

She also enjoyed lounging by the quiet thermal pool. There is a sauna on-site and a small sitting area outside if you’d like to get some fresh air. You can also order small plates of food and drinks to the spa as well. Treatment prices aren’t cheap but that is to be expected for an airport hotel.

The gym includes the standard equipment you see at most hotels. They did have heavier dumbbells in excess of 80 lbs which was a surprise, but of course, exceeds anything I can lift. They also had a Peloton bike for use. Cost of the InterContinental MSP

Rooms can be booked for as low as $142 per night during the winter, or for 35,000 IHG points per night.  I imagine pricing won’t be this cheap for long and prices will head north of $200 in the next year as the hotel gets more established with travelers.

Mrs. TT and I only live 15 minutes away from the airport but we’re already planning to stay at the hotel for future early morning flights. The hotel is a beautiful property and even if you’re not a guest I’d drop in to check it out.

While the service in the restaurants was sub-par these are things that will hopefully improve over time. Overall we had a wonderful stay at the Intercontinental Minneapolis Airport and with current prices below $200, it’s a bargain for such easy access to the airport. 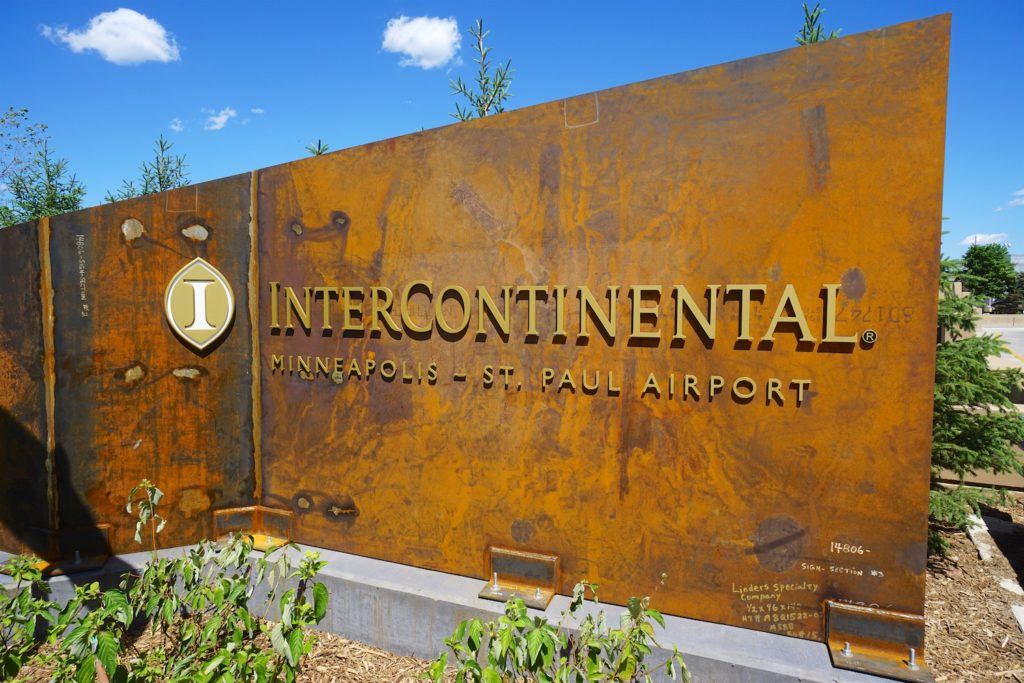