This summer, Mrs. TT and I had a short stay at the Le Meridien Munich and were upgraded to a Deluxe Suite. The hotel is centrally located in the city of Munich in the German state of Bavaria. It is one of the best locations in the city if you are taking the train or want to walk the old town city center. It's also one of the best hotels to stay at if you're attending Oktoberfest. 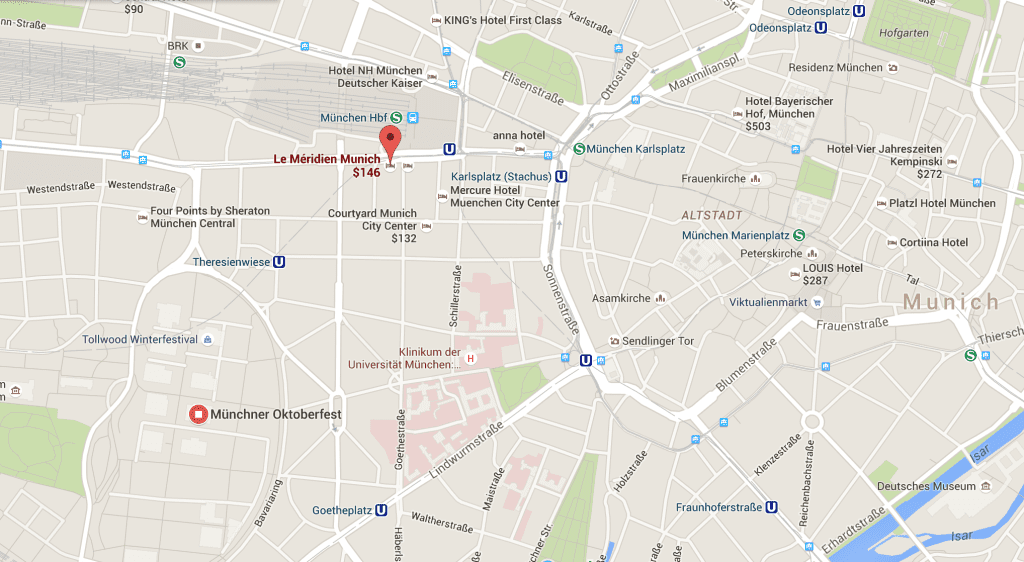 The Le Meridien Munich is located directly across the street from the busy Munich train station. It is a 10 minute walk to the old town to the east and Oktoberfest to the southwest. In my opinion, it has the best location in the city to visit both. I've stayed at the Four Points Sheraton Munich, which is located right outside of the Oktoberfest grounds, and there is very little to do in the area besides attend Oktoberfest. The Le Meridien is much more centrally located. The new Aloft is also right next door to the Le Meridien.

Getting to the Le Meridien

Plane: If you arriving by plane take suburban train lines S1 or S8 towards the city center. Your final stop is Munich central station. The trip takes about 40 minutes and costs 9 euro one-way. Alternatively, you can take a taxi for 50-60 euro.

Train: Across the street! Doesn't get much easier than that.

Car: I've driven into Munich and it's challenging but doable. Underground parking is 25 euro per day. I dropped off our car rental at Europcar about a 15 minute walk away.

Thrifty Tip: If you aren't a SPG Platinum the only free Wi-Fi  is in the lobby. Absurd I know.

Check-in was easy in the spacious lobby. We were upgraded to a Deluxe suite which featured a corner room with a view of the train station and another better looking side street. I'll be the first to say, it's not exactly the most scenic area of Munich but it has great access to everything in Munich. As Starwood Platinum members, we were offered a free breakfast buffet for two (40 euro value), but we had to leave early so we took the 500 points instead. I've heard really good things about the breakfast buffet, so try it out if you can.

Our room was very spacious and featured a futon in the living room as well as a desk. On the other side of the short wall behind the futon was the king sized bed. 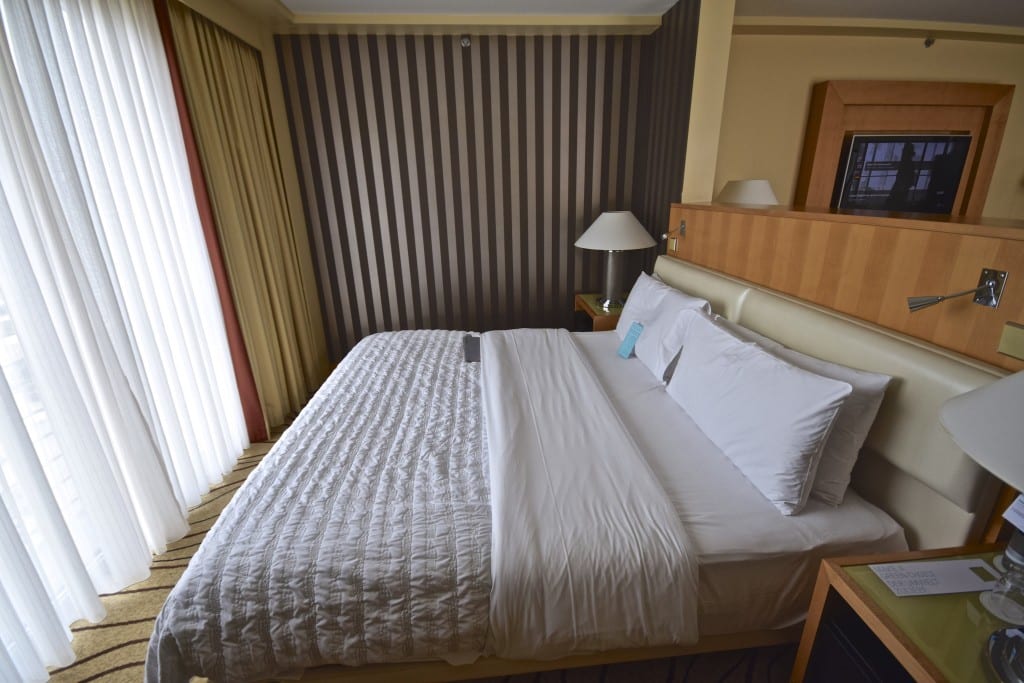 The king bed was huge but didn't have a lot of room between the bed and windows. It's also open to the rest of the room, so it could be a little awkward if you have a third person sleeping on the futon. 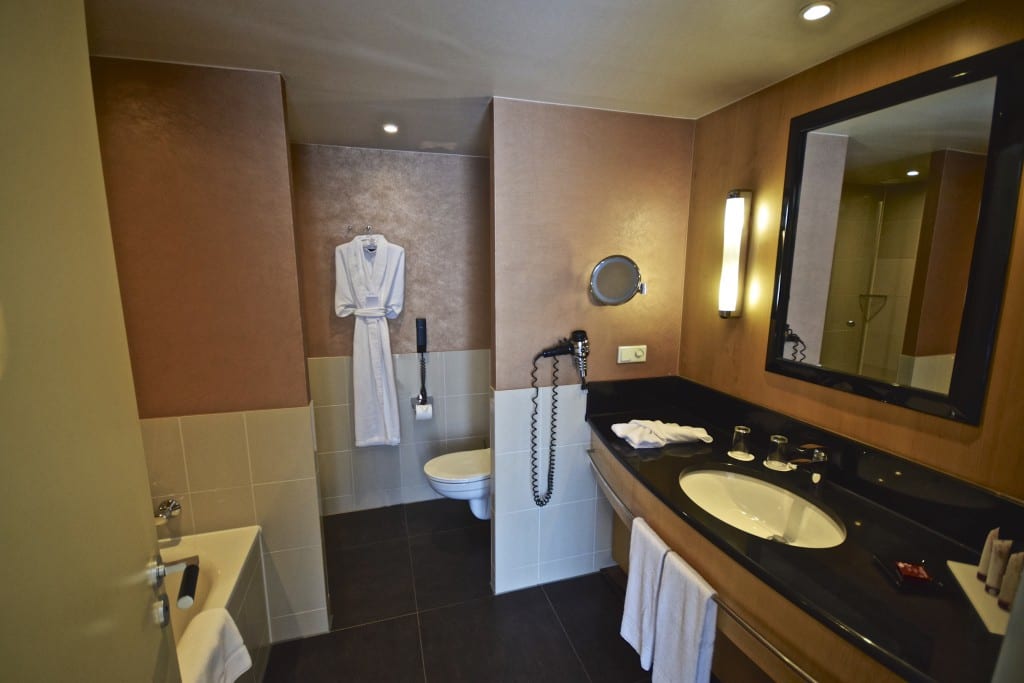 The bathroom was spacious and featured a full-sized tub and shower. It was clean and you could tell it had been recently updated.

The 3D floor plan was exactly the same as our room. There is also a small study between the bathroom and living room. It seemed to be a waste of space but it ended up being a good place to store our luggage. 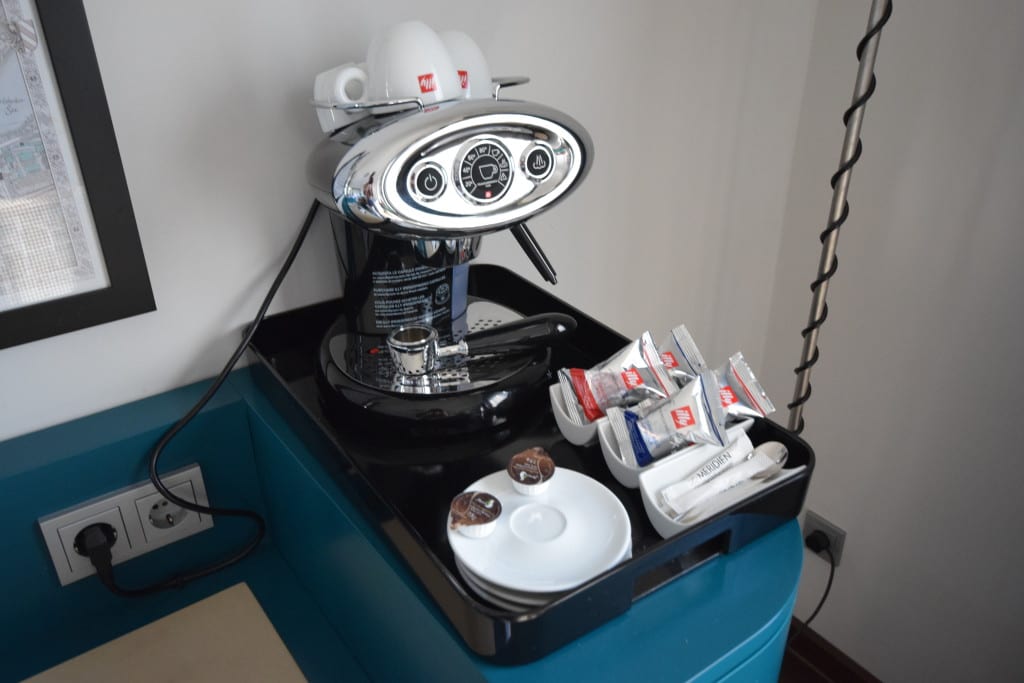 Starwood properties in Germany feature the illy espresso/coffee maker. It works very similarly to the Keurig K-cups here at home. The illy coffee maker also makes espresso which is a must when you’re trying to kick that jet lag from the flight in. Note the coffee and espresso cups on the top. Europeans take their coffee seriously.

The hallways were very clean but a little tired looking. The hotel was last renovated in 2013 and was generally in pretty good shape.

Pool and spa looked great but we didn't have enough time to try them out.

Our stay at the hotel was very brief so we didn't have the chance to enjoy any drinks in the hotel bar, although it looked very inviting. There is also an on-site restaurant called Le Potager. Safe to say, you won't go hungry staying at the Le Meridien Munich. We'll be back in 2016, so we'll have to try out the restaurant and bar.

Every time I visit to Munich I have a difficult time deciding where to stay in the city center. There are quite a few options, especially if you typically stay at SPG hotels. With the new Aloft next door there are now three hotels to choose from. All three hotels are 10,000 SPG points a night, and they all have good reviews. The Four Points Sheraton is getting tired but is only 5 minutes to Oktoberfest, and generally has the best reviews. The Le Meridien was updated in 2013 and is closer to the city center and is still only a 15 minute walk from Oktoberfest. The Aloft could be the game changer, and I'll be checking it out in 2016. Staying at any of the three SPG hotels for only 10k Starpoints a night is a steal, especially when rooms can go for 400 euro during Oktoberfest!

Have you stayed in the Le Meridien Munich Deluxe Suite? Let me know what you thought of it in the comments below!

Check out our other hotel reviews: