The Le Meridien Grand Hotel Nuremberg is centrally located in the city of Nuremberg in the German state of Bavaria. It is one of the best locations in the city if you are taking the train or want to walk the old town city center. Mrs. TT and I loved walking through the historic city center and eating our way through Nuremberg. 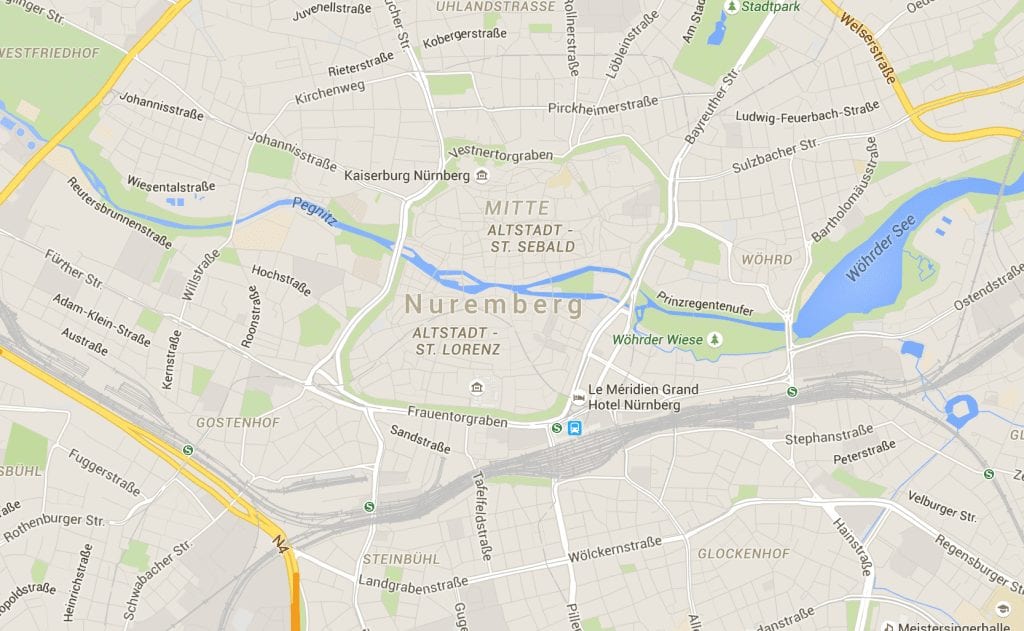 Nuremberg is a city over of over three million people but you sure couldn't tell by walking through the old town center. It was busy but everything was easily accessible and not very crowded. Mrs. TT and I arrived via high speed rail from Munich and conveniently the hotel is just across the street from the train station.

Thrifty Tip #1: Even though you can see the hotel from the exit of the train station do not try to cross the road/tram tracks. Instead take the escalator down and under the tram tracks. It's quicker and safer than trying to lug your bags across the busy city center.

Check-in at the hotel was a breeze. As Starwood Platinum members we were offered free breakfast, and also two free drinks in the historic lobby bar.

We were upgraded to a third floor corner room but the view was nothing special and it was obscured by christmas lights hanging just outside. The large building under construction across the street is the train station. As you can barely see on the lower left hand portion of the photo there is also a tram that runs directly in front of the hotel to various parts of the city. Use google maps to look up the tram schedule. 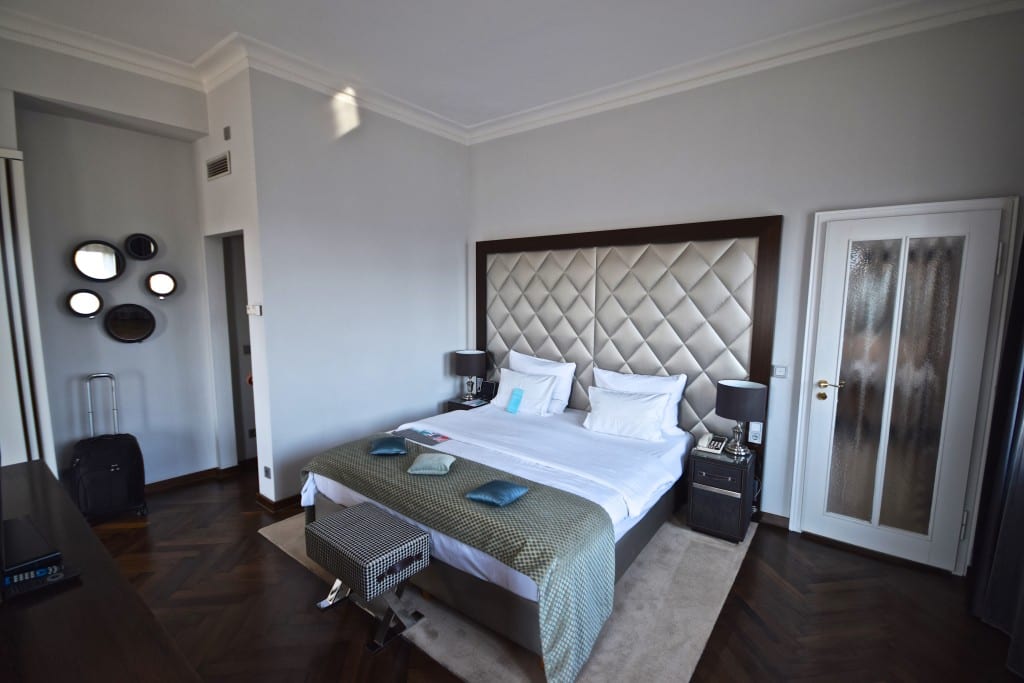 We were upgraded the day before check-in to a junior suite. The upgrade is due to our Platinum status, which usually offers us an upgrade at most Starwood properties. The room styling was very nice and the property looked to have been renovated in the last couple years. The corner junior suite offered a king sized bed, couch, desk, and large bathroom. The couch is a not a sofabed and is a little short to sleep a third person. The room was very spacious by European standards and had more than enough room for the two of us. 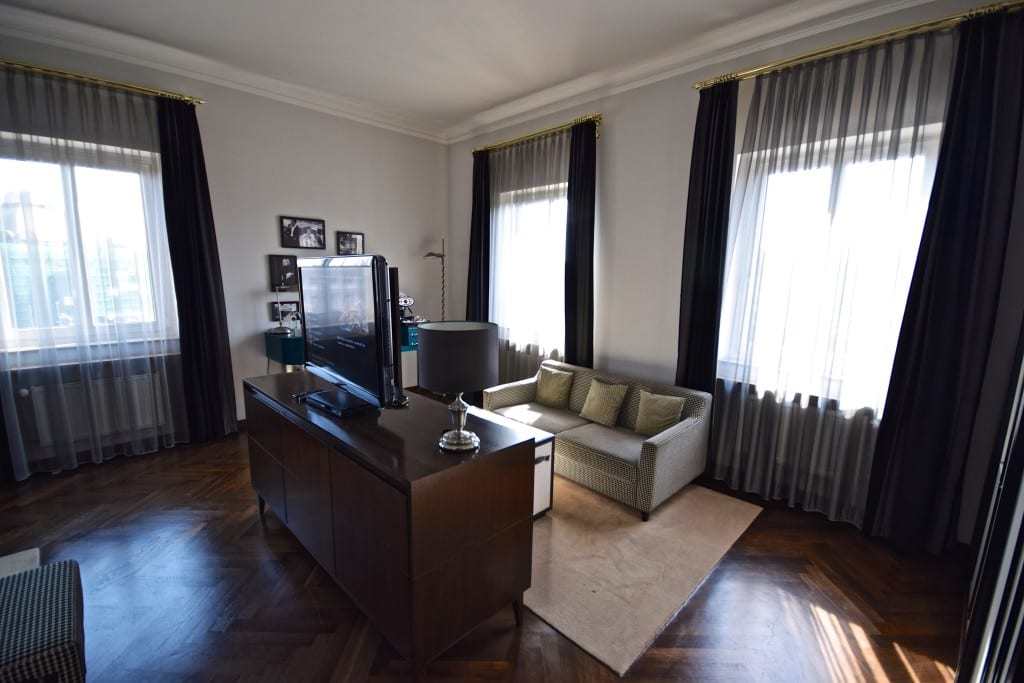 The windows to the left offered a view of the train station and the windows behind the couch offered views of the old town. I was clearly slacking in this review and failed to get any photos of the view of the ancient city walls and castle. 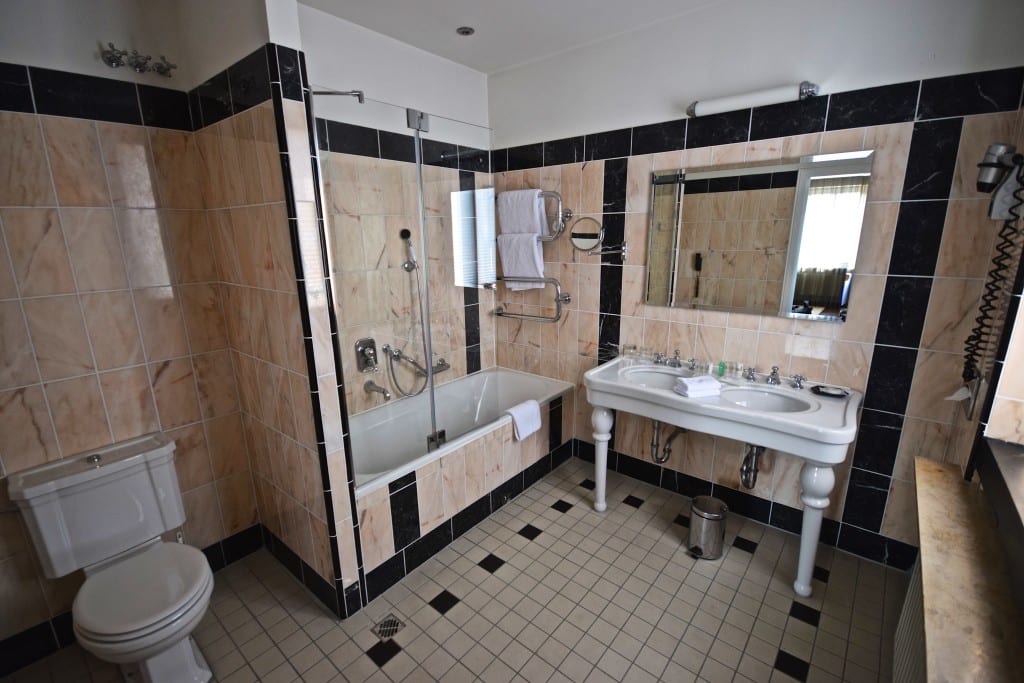 The bathroom had vintage art deco styling with plenty of space. The two sinks were great so I didn't have battle Mrs. TT when getting ready for the day. The bathroom also had a nice view of the city center. Many Starwood properties in Germany feature the illy espresso/coffee maker. It works very similarly to the Keurig K-cups here at home. The illy coffee maker also makes espresso which is a must when you're trying to kick that jet lag from the flight in. Note the coffee and espresso cups on the top. Europeans take their coffee seriously.

As I stated in the introduction, we were offered two free drinks in the historic Atelier lobby bar. The art deco style bar was pretty quiet when we arrived in the early afternoon and I picked a local Bavarian beer (Lederer Pils) for my free beverage and Mrs. TT chose some sparkling rose. Our bartender was a younger guy and offered great advice on what to see around town. His english was so good I wasn't even sure if he was German when he first took our order. The bar also offers live jazz music in the evenings.

Thrifty Tip #2: Use your room key to get free admission to the local Neues Museum Nürnberg

If you are a Platinum SPG member, the free breakfast is impressive with a full buffet served in the hotel lobby restaurant. The buffet had everything from pastries, free squeezed juices, cured meats, made to order eggs, and sparkling wine (mimosas). The breakfast buffet was quite a spread and much better than many other SPG properties. I’d make sure to eat breakfast early as it can get busy. If you aren't a Platinum member breakfast will run you a pricy 30 Euro ($35). Overall we were again impressed with the treatment of our hotel status having been 4 for 4 on getting great room upgrades on our European vacation. The Le Meridien Grand Hotel Nuremberg Junior Suite was only 80 Euro ($91) so it's quite a steal for a night in Nuremberg!

Check out our other hotel reviews: