Months after kicking off its first flight to Hawaii, Southwest said Thursday it plans to begin service to the Hawaiian islands from more U.S. destinations while also adding flights to Kauai (LIH) and Hilo (ITO) on the eastern side of the Big Island.

Southwest plans to begin flying to the islands from both Sacramento (SMF) and San Diego (SAN), adding to the existing nonstop Hawaii flights from Oakland (OAK) and San Jose (SJC). Just when those new flights may begin is unclear – executives from the airline were tight-lipped Thursday about the specifics of their plans.

But that's not all. The airline is also hinting at its long-awaited service to Kauai (LIH), as well as launching flights to Hilo (ITO) airport. Again, the timing of when those flights may begin is up in the air. And Southwest didn't spell out whether it would offer non-stop flights from the West Coast to either island, or if it would require a stop in Honolulu (HNL). 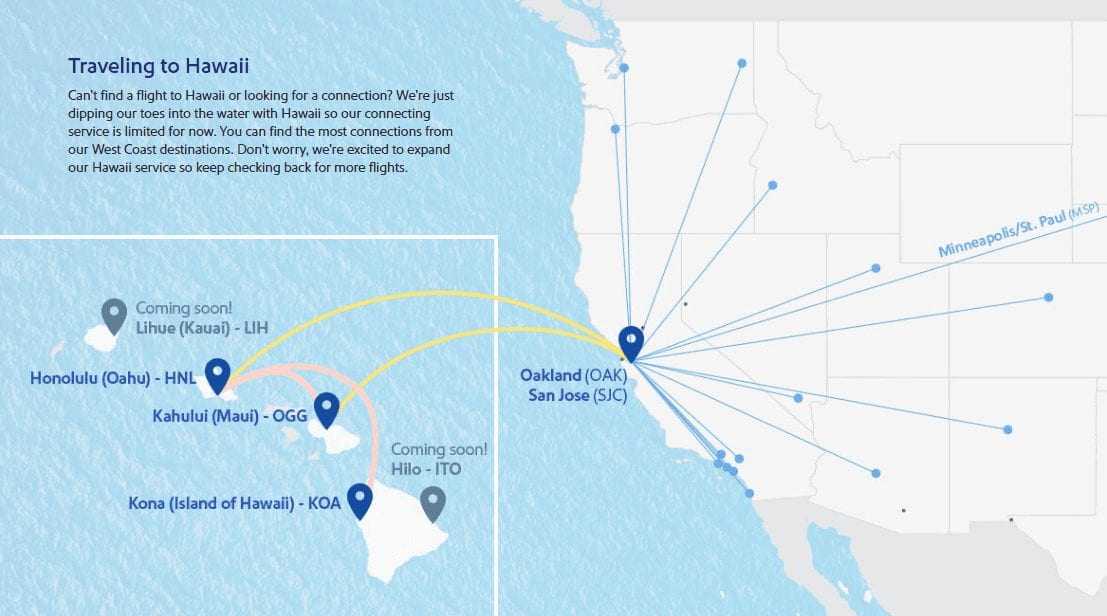 It's been a slow burn for Southwest as it builds up its network of flights to Hawaii. It was dragged out by the federal government shutdown over the winter and is now being beset by the grounding of the Boeing 737 MAX.

It took years for the Dallas-based budget carrier's Hawaii plans to come to fruition before flights finally went on sale and took off in March. By late April, the airline started its promised inter-island service – finally giving Hawaiian Airlines some much-needed competition.

But the grounding of the 737 MAX put some of its grander plans on hold, as the airline is short on the aircraft it needs. This latest announcement finally puts some of those plans in motion, though the shortage of jets has caused problems for travelers in the Midwest and beyond looking to fly to Hawaii on Southwest.

Trouble aside, Southwest says their Hawaii flights have been a smash hit, with planes flying from California to Hawaii and back that are more full than other Southwest routes nationwide.

“Demand for Southwest service to, from, and within Hawaii is robust,” Southwest CEO Gary Kelly said. “While the lack of available aircraft, due to the MAX groundings, resulted in expansion delays to Hawaii, we are excited to resume growth plans next month.”

It hasn't been easy or fast, but Southwest's big plans for flights to Hawaii are finally on the move.