Before COVID-19, Norwegian Airlines helped drive airfare over to London, Paris, and throughout Europe down to record lows. Norwegian's transatlantic flights were a victim of the pandemic, but another carrier is ready to take its place.

Norse Atlantic is set to begin nonstop flights between the U.S. and Norway next month … but as it prepared to take up the mantle from Norwegian, the airline has been testing additional European destinations in the works. Now we know where they're flying next: Straight into London.

Nonstop daily flights from New York City (JFK) into London-Gatwick (LGW) are set to begin Aug. 12. Those fares just went on sale, giving travelers another cheap option to get from the East Coast to England.

How cheap? One-way economy fares from New York to London start at just $115! And a seat in the airline's Premium cabin – akin to Premium Economy with extra legroom and width – starts at just $199 each way…

The eastbound flight leaves New York daily at 6:25 p.m. and arrives in London at 6:45 a.m. the next morning. The westbound flight leaves London at 1 p.m. daily and arrives in New York at 3:55 p.m. Norse Atlantic's entire fleet is comprised of Boeing 787 Dreamliners. The setup inside the plane is remarkably similar to its predecessor Norwegian Air: While it's fairly no-frills, it can be a comfortable flight with well-padded seats and decent legroom.

Read our review of the old Norwegian Air economy!

You won’t yet find Norse Atlantic fares on other sites including Google Flights, but they're available for purchase straight on the Norse Atlantic site. There, you'll find a few fare classes in both Economy and Premium cabins.

But as is the case with its predecessor and other ultra-low cost carriers, the cheapest one-way fares come with … pretty much nothing. Unless if you're fine flying with just a backpack, expect to may more for everything from seat assignments to carry-on baggage to checked luggage to onboard meals and drinks. 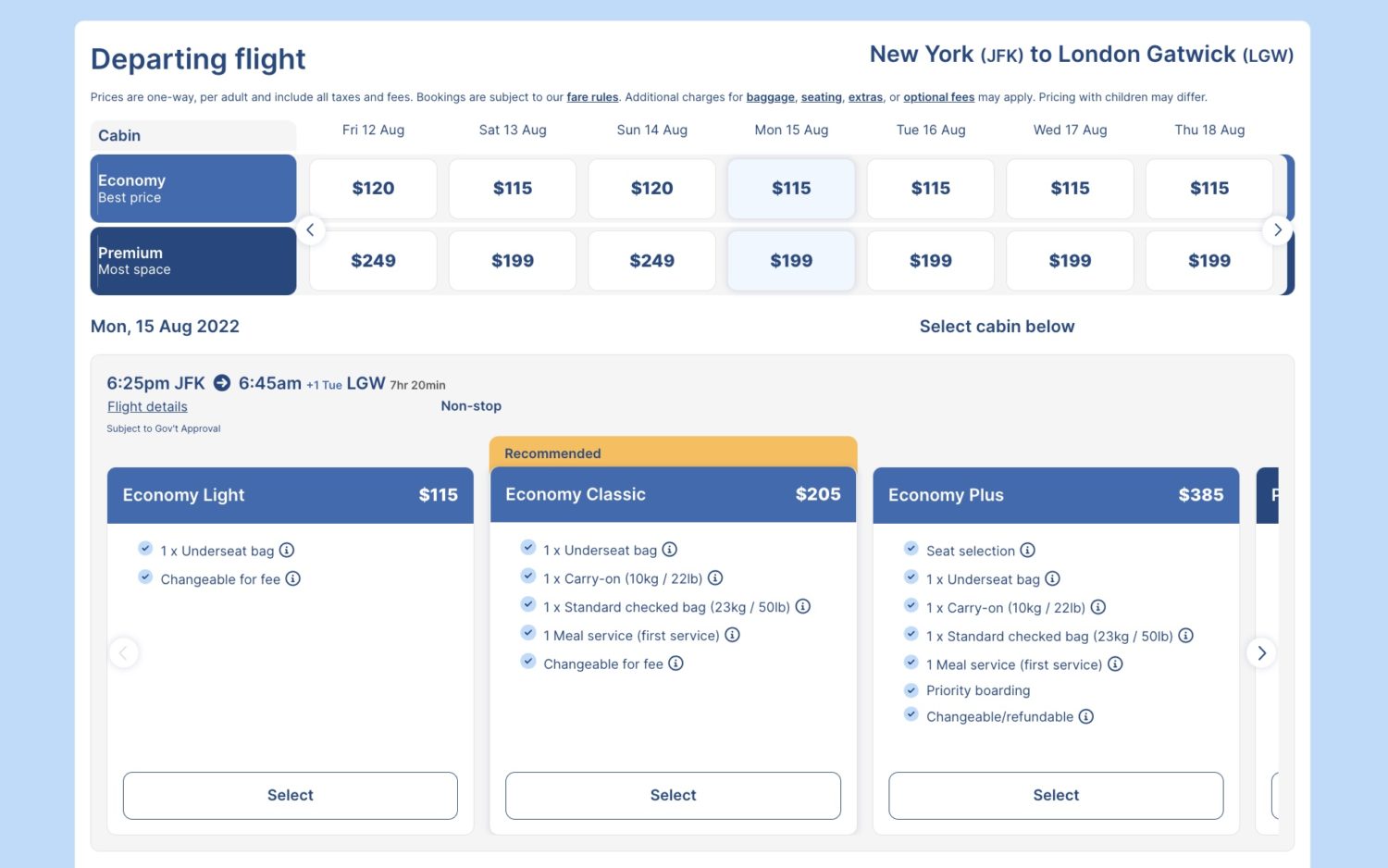 “Economy Light” fares start at just $115 one-way, but only include a personal item. “Economy Classic” fares start at $205 and include a carry-on, checked bag, and one free meal onboard. The “Economy Plus” fare starts at $385 and includes free seat selection, priority boarding, and free changes along with the bags and the meal.

Want to add those extras separately? A carry-on bag starts at $25 each way, while checked bags under 50 pounds cost $70. Seat assignments seem to cost anywhere from $20 for a middle seat in the back to $28 for window and aisles to as much as $100 for extra legroom economy seats at the front of the cabin. A light meal will cost you another $20. 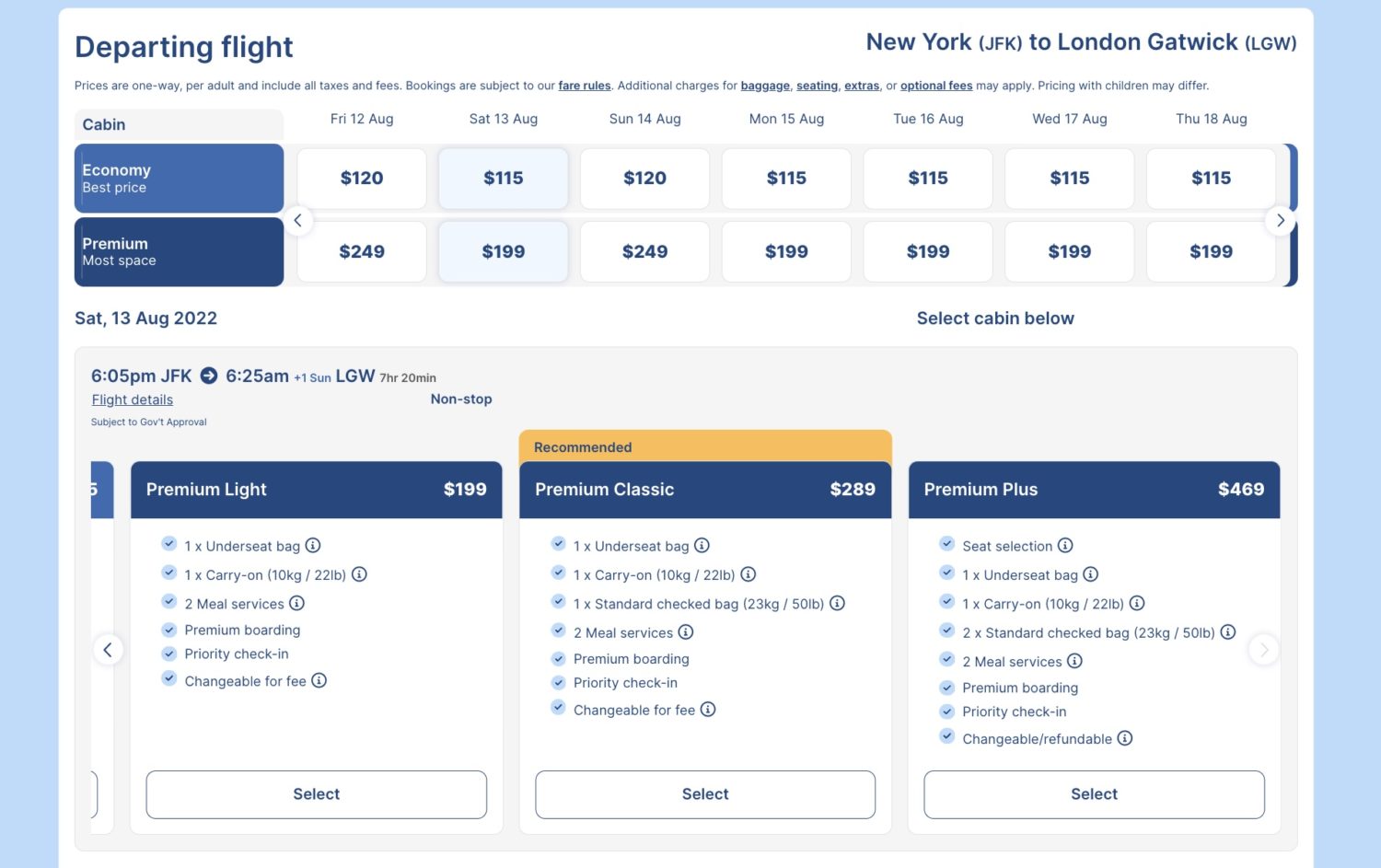 Norse Atlantic's low-cost presence on this route between the U.S. and London could be a boon for U.S. travelers hoping for a cheaper flight. Competition always wins the day in the airline industry, and having a new, super cheap carrier running this route will put pressure on the bigger airlines.

So even if you never plan to fly in one of Norse's Dreamliners, you might reap some savings because of its existence. And with one-way fares starting at just $115, it's a ton of pressure on the traditional U.S.-London carriers like American, Delta, United, JetBlue, British Airways, Virgin Atlantic, and more.

Norse will begin flying to Oslo on June 14 starting from New York City. Nonstop flights to Norway are expected to launch from other cities throughout the summer.

One-way fares start at just $115 from the U.S. to London, which is about as cheap as it gets. If you understand what you're getting – and how much more you'll pay for a seat assignment, bags, and meals – Norse Atlantic could be your ticket for a cheap trip to London this year. But even if you don't fly Norse, their presence flying between the U.S. and London is a win for consumers.