Basic economy fares are the scourge of air travel. The major U.S. airlines introduced them to compete with budget airlines, offering no-frills fares that can't be changed or refunded and come without seat selection – and in some cases, without a carry-on bag.

But the secret is that airlines don't actually want you to buy these fares – they're designed to be unpleasant enough to convince travelers to pay up for a normal economy fare. And now, it appears the three major U.S. airlines – Delta, United, and American – are charging more to upgrade out of basic economy.

The norm for most flights to move out of basic economy has long been $60 round-trip. It seems that all three carriers are now charging $70 to avoid basic economy on most domestic round-trip flights.

We analyzed 100 round-trip domestic fares on United, American, and Delta scheduled for later this summer and fall. It's clear that the airlines now overwhelmingly charge an extra $35 each way – or $70 more for a round-trip main cabin ticket over basic economy.

We have to stress that these rates can still vary widely, based on where you're flying from, where you're heading, which airline you're on,  which fare classes are available for purchase, and more. But for as long as we can remember, the standard price has been $30 each way. That's no longer the case.

A Delta spokeswoman said only that “pricing across our network differs based on variables including time of day, time from departure and market,” while a United spokesman said the airline would not go into detail about fares and pricing.

American did not respond to a request for comment.

Alaska Airlines has its own basic economy offering which it dubs “Saver Fares.” These are by far the least-restrictive fares of the bunch, and it seems Alaska is still charging $60 or less round-trip. JetBlue still hasn't rolled out its basic economy fares, though it plans to do so sometime this year.

You can find some cheaper basic economy upgrade rates on shorter, ultra-competitive flights on the East and West coasts – think Boston (BOS) to New York City-JFK (JFK) or Seattle (SEA) to Los Angeles (LAX). In those cases, expect to pay $30 or $40 to avoid basic economy on a round-trip fare. If you're leaving from a hub where one airline dominates – like a Delta flight out of Atlanta (ATL) or an American Airlines flight in or out of Dallas-Fort Worth (DFW) – that upgrade cost can be substantially larger.

But it's clear now that the norm is $70 to avoid basic economy. And that just adds to the pain.

While a $10 fare increase on a round-trip flight may seem small, those numbers add up fast. American Airlines executives have said more than 60% of basic economy passengers pay to upgrade out of basic economy. On United Airlines – which has the most punitive basic economy restrictions – that number is even higher.

So go figure that the airlines aren't shy about trying to upsell you to avoid basic economy. All three major U.S. carriers practically beg flyers to pay up for a main cabin fare during checkout. You basically have to opt out of basic economy rather than choose to upgrade. 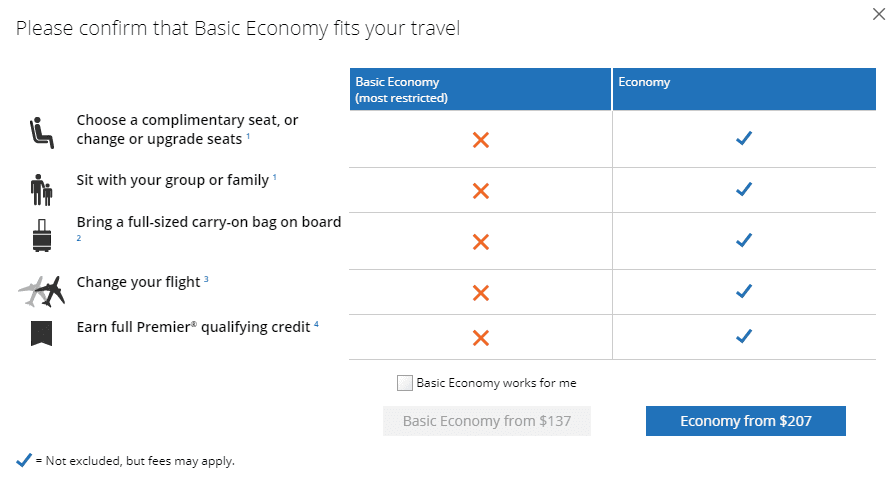 This larger price differential highlights a critical point about basic economy fares: They aren't cheaper. Airlines swapped the basic economy fare for what was once a standard economy price, forcing you to pay up for the “benefits” you once got for free.

Now, it seems they're asking you to pay even more.

Is an extra $10 the end of the world? No. But airlines continue to find ways to get more money out of travelers while pretending they're offering a great deal with basic economy fares. If this larger basic economy upgrade cost holds up, consider it the latest way to get nickel and dimed.