Alaska Airlines will join the Oneworld airline alliance by mid-2021 and partner even closer with American Airlines, the airlines announced Thursday, a massive shakeup in the relationships between U.S. carriers that could have major ramifications for earning and using points and miles.

Alaska has long been a “free agent” among the major airline alliances, instead forging unique one-off airline partnerships that have made Alaska's Mileage Plan miles incredibly valuable (think Cathay Pacific or Emirates First Class). The Points Guy broke the news of Alaska's move to join Oneworld.

“We're really fired up about it. The line that's been kicking around is ‘Alaska goes global,'” Nathaniel Pieper, Alaska's senior vice president of finances, alliances, and treasury told The Points Guy. 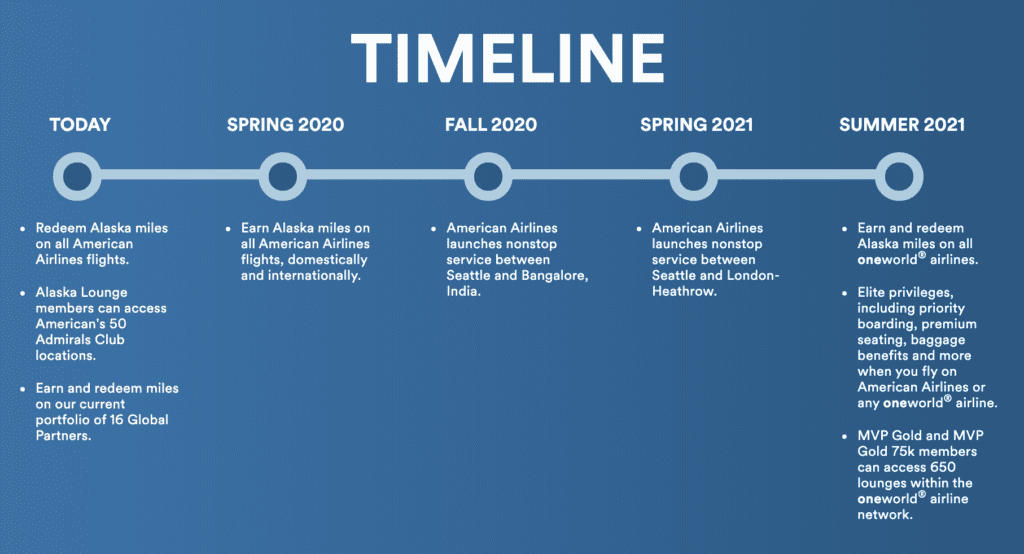 What You Need to Know

Alaska and American already have a partnership, including some frequent flyer benefits and codeshare agreements that allow you to fly on Alaska planes booked through American – and vice versa. But that agreement was fizzling out, set to be drastically scaled back later this year.

Now, the airlines are moving forward with a huge expansion of both domestic and international codesharing agreements. Their new partnership will give American Airlines flyers access to Alaska's growing domestic network on the west coast, and Alaska flyers will now have access to American's growing international and domestic route network, which includes the eastern part of the U.S. where American Airlines has many hubs but Alaska is weak.

For Alaska Airlines, it's a win-win: a way to open up more international flights for loyal Alaska flyers while also taking it to Delta, which has built up a strong presence in Alaska's Seattle (SEA) hub.

With its fleet of Boeing 737 and Airbus A320 jets, Alaska is largely limited to flying within North America. According to The Points Guy, the airline has increasingly struggled landing travel contracts from large tech companies like Seattle-based Amazon and Microsoft, which require international connectivity.

“It’s very hard for us to compete for that,” Nathanial Pieper said. “It really broadens [what is] a domestic West Coast airline so that we can be a global player.”

What About Earning and Using Alaska Miles?

Is bad news on the horizon?

While American and most airlines have transitioned to revenue-based mileage earning – where you earn miles based on how much you pay – Alaska Airlines is one of the few that still bases it on the distance you fly. That's an insanely lucrative setup for Alaska flyers. But as they form a close partnership with American, can that last? We doubt it.

As for using Alaska miles, Alaska says it will maintain relationships with unaligned airline partners like Emirates and Icelandair as well as partners in other airline alliances, like Singapore Airlines. But as Alaska joins Oneworld next year, it's hard to imagine how these partnerships can survive.

Losing that partnership with Emirates would be a huge blow to Alaska's Mileage Plan program, as it's one of the best and easiest ways to book award tickets with Emirates – including flights on their amazing new First Class cabin. While other options tack on massive amounts of cash fees, you can book Emirates First Class from the U.S. to the Middle East for 150,000 Alaska miles and just $20 or so in fees.

Only time will tell how this ultimately shakes out. But if you have plans to use your Alaska Airlines miles to fly with Emirates, I wouldn't wait to book.

Both Alaska and American have noted their expanded relationship will be subject to government review. But if all goes to plan, Alaska Airlines will become a full member of the Oneworld Airline alliance sometime next year.