I don't remember the fear or panic when word first came about one plane hitting a skyscraper in New York City. When another struck, the horror of the moment started to set in. Even at 12 years old, it was easy to recognize the gravity of that day – even if it all blurred together into an incomprehensible tragedy.

But I still remember the silence. A silent teacher walking into a classroom of seventh graders to deliver terrible news. A silent car ride home from school. Silently watching the video footage of the Twin Towers crumbling, over and over and over again, stuck in a horrible time loop.

Twenty years later, it's still difficult to find the words for the deadliest terror attack in history. Nearly 3,000 people died in the coordinated attacks, as two planes took down the World Trade Center towers in New York City, ripped a hole in the Pentagon in Washington, D.C., and crashed into a barren Pennsylvania field as passengers fought to regain control of the plane from hijackers.

Many thousands more were injured on Sept. 11, 2001. Add in the lives of first responders, firefighters, and everyday Americans whose reward for their heroism was debilitating disease and death years after pulling their fellow citizens out of the wreckage or guiding them to safety, and the toll is even more heartbreaking.

It has been 20 years, and while it may be difficult to find the words to capture that day, the shadows of that tragedy have stretched on. They shaped us all. 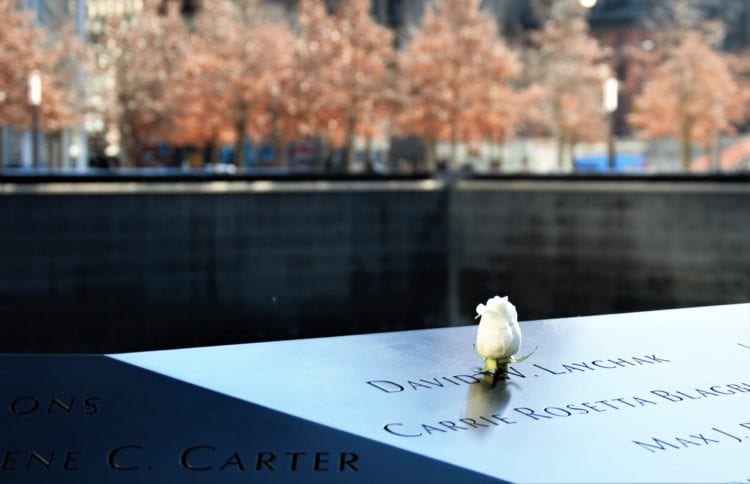 The Sept. 11 attacks changed the arc of history, and all of our lives with it. It spawned two decades of war and religious paranoia, causing even more death and hatred. It forever altered air travel in the U.S. and abroad, giving birth to the TSA security procedures we know today and paved the way for new ID requirements for domestic flights set to take effect in 2021.

It ripped apart the New York City skyline, leaving the incredible 9/11 Memorial and Museum where the iconic Twin Towers once stood. And it left millions of Americans to contend with the wreckage of their daily lives, suddenly robbed of husbands, wives, sisters, brothers, children, and friends.

Just like the day itself, finding enough words for the impact and legacy of 9/11 is difficult: The grief is part of who we are now. But it's much easier to find words of gratitude.

Today, and every day, remember Tom Burnett, who reassured his wife, “Don't worry, we're going to do something” on board United Flight 93 after hijackers steered it toward the White House. Remember Todd Beamer, who said “Let's roll” as he, Burnett, and other passengers fought back for control, bringing the plane down in Pennsylvania.

Remember Heather “Lucky” Penney, who jumped in her unarmed F-16 and screamed through the skies, understanding that taking down that plane to save lives would mean giving up her own. “I'll take the tail,” she told her partner as they prepared for a kamikaze mission that never needed to happen because of the bravery of Burnett, Beamer, and others.

Remember the thousands more who might have whispered “Let's roll” under their breath, too, before running into collapsing buildings, carrying the injured to safety, and digging through the rubble for days on end.

Remember Rick Rescorla, who disobeyed orders to keep his fellow Morgan Stanley employees inside the South Tower after the attacks began, singing through a bullhorn to keep employees calm during the evacuation. Rescorla's body was never found, but he helped more than 1,000 people escape the building.

Remember Captain Kathy Mazza, a Port Authority police commander who rushed to the scene to help hundreds of panicked men and women escape the North Tower before it collapsed before she, too, gave her life because heroes only stop to think about the consequences of doing nothing.

Twenty years later, it's hard to say whether America has fully recovered from that terrible day. It changed the country, and the world, forever. Can we ever truly recover from that?

But we know the world is full of Tom Burnett's Todd Beamer's, Heather Penney's, Rick Rescorla's, and Kathy Mazza's. Their actions 20 years ago likely saved the lives of the next heroes we need. And for that, we can't afford to be silent.