The Cheapest Flight Deals We've Found for 2023
Skip to content

It might seem to you like flight prices have been a rollercoaster this year, and you're not wrong. But that doesn't mean amazing deals have disappeared – just the opposite.

We've seen some of the cheapest airfare we can ever remember. We’re talking roundtrip fares all the way to Cape Town (CPT) in South Africa for $591, to Norway for just $230, and roundtrip fares to Greece as low as $384! Even great deals to use points and miles have made a comeback, like roundtrip fares to Maui for 19,000 SkyMiles or business class award alerts to Europe bookable for 45,000 points each way

The flight deals are out there, and it's our mission to help you find them. Here's a look at the best flight deals we've found so far for 2023!

Want cheap fares and points and miles deals in your inbox? Sign up for Thrifty Traveler Premium now!

Cheap Flights in the United States

There's no doubt about it: Domestic flight prices have been rising lately. While I don't mean to toot our own horns, we've continued to cut through the fat and find some remarkable value for our subscribers through it all.

This one had Thrifty Traveler Premium members' heads spinning. 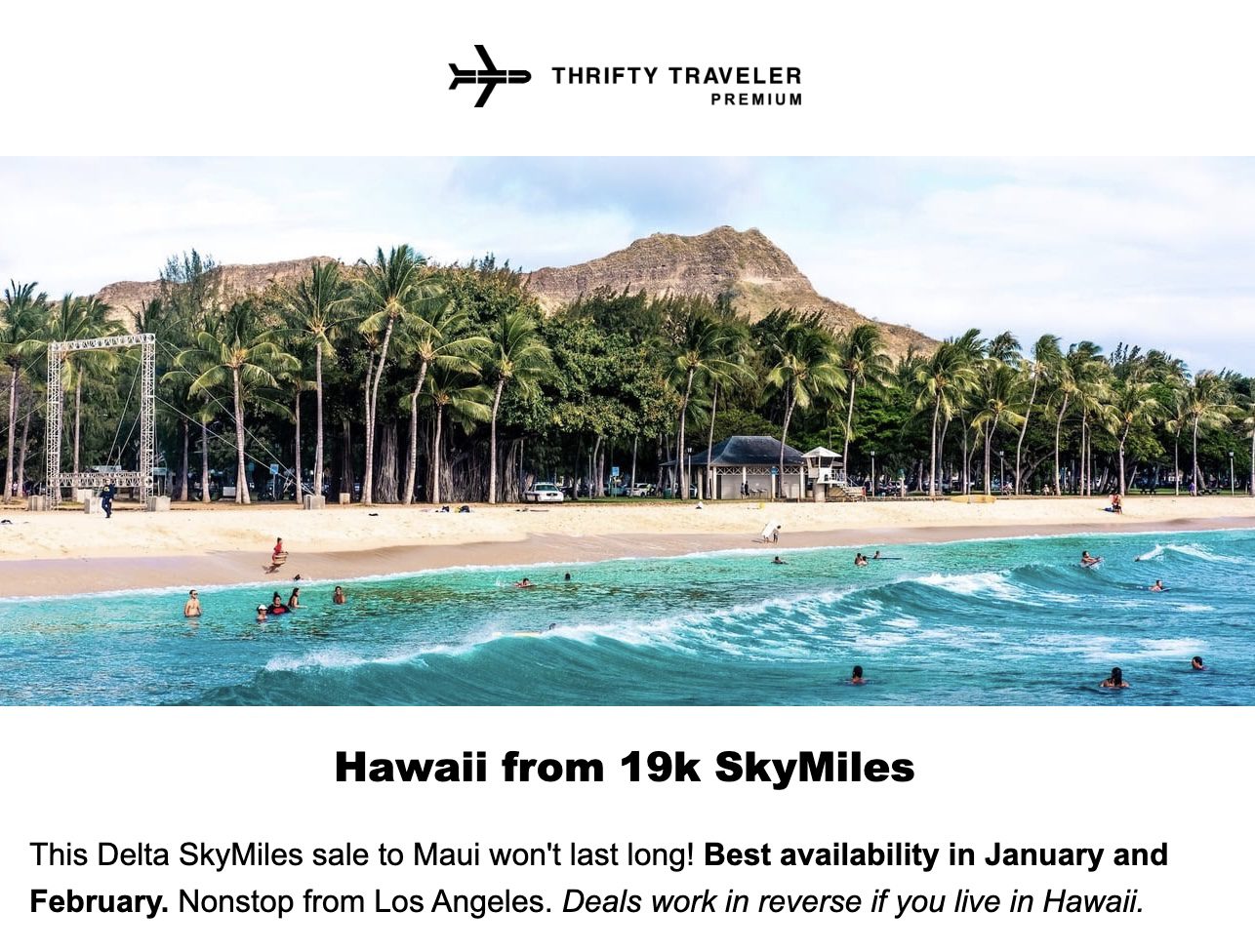 Delta SkyMiles flash sales are some of our favorite ways to spend your hard earned points and miles, and this one was no different. But cheap flights using cash are out there, too. Want to head to the mountains in any season? Colorado is a good place to start your search. 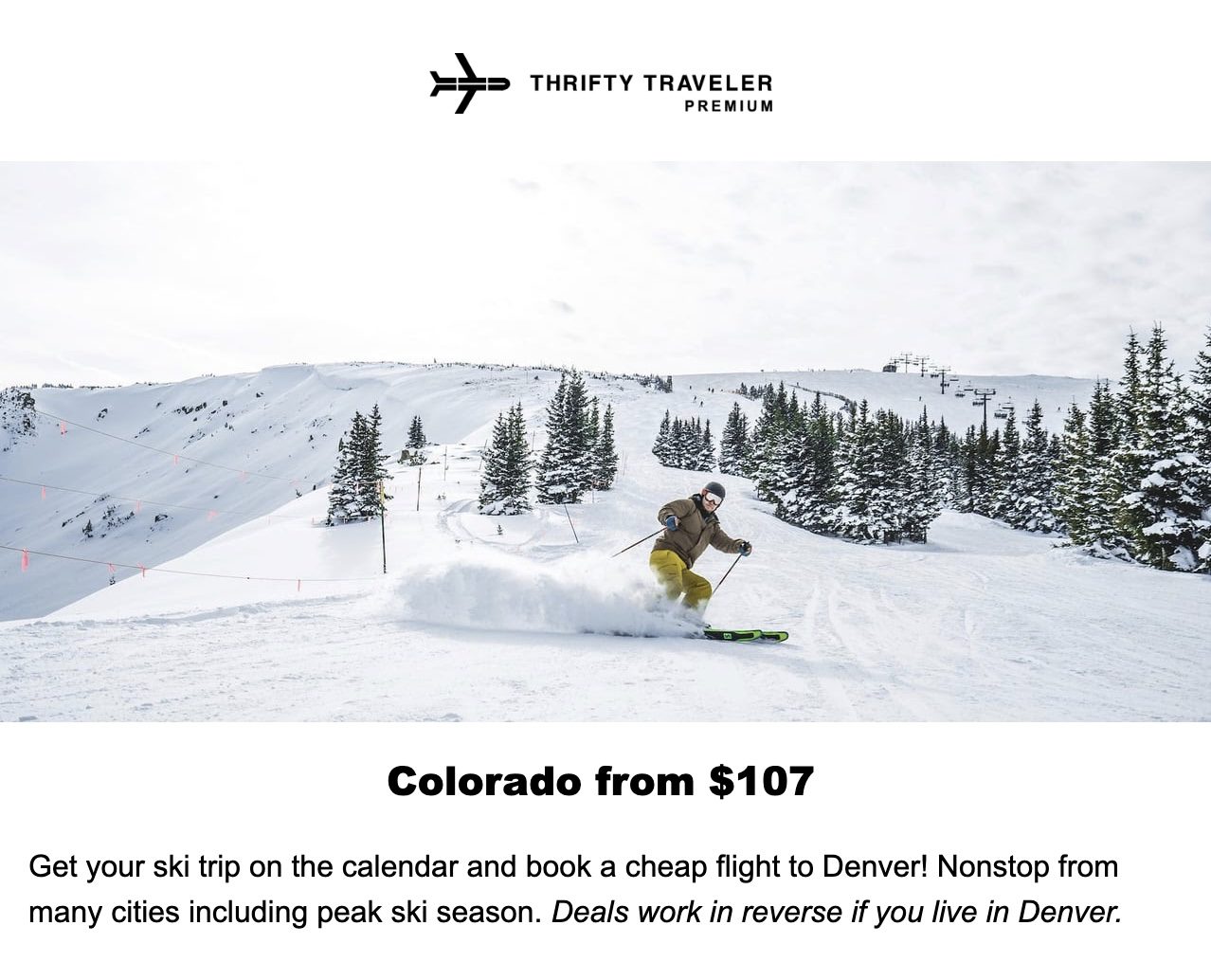 This deal included peak ski season in the Rockies and would be the perfect ticket to buy if you're looking to take your family into the mountains this year or next. But the snow isn't for everyone. For those seeking some sun, a laid-back trip down to Arizona could be exactly what the doctor ordered.

Get every points & miles deal and cheap flight we find with Thrifty Traveler Premium – join now! 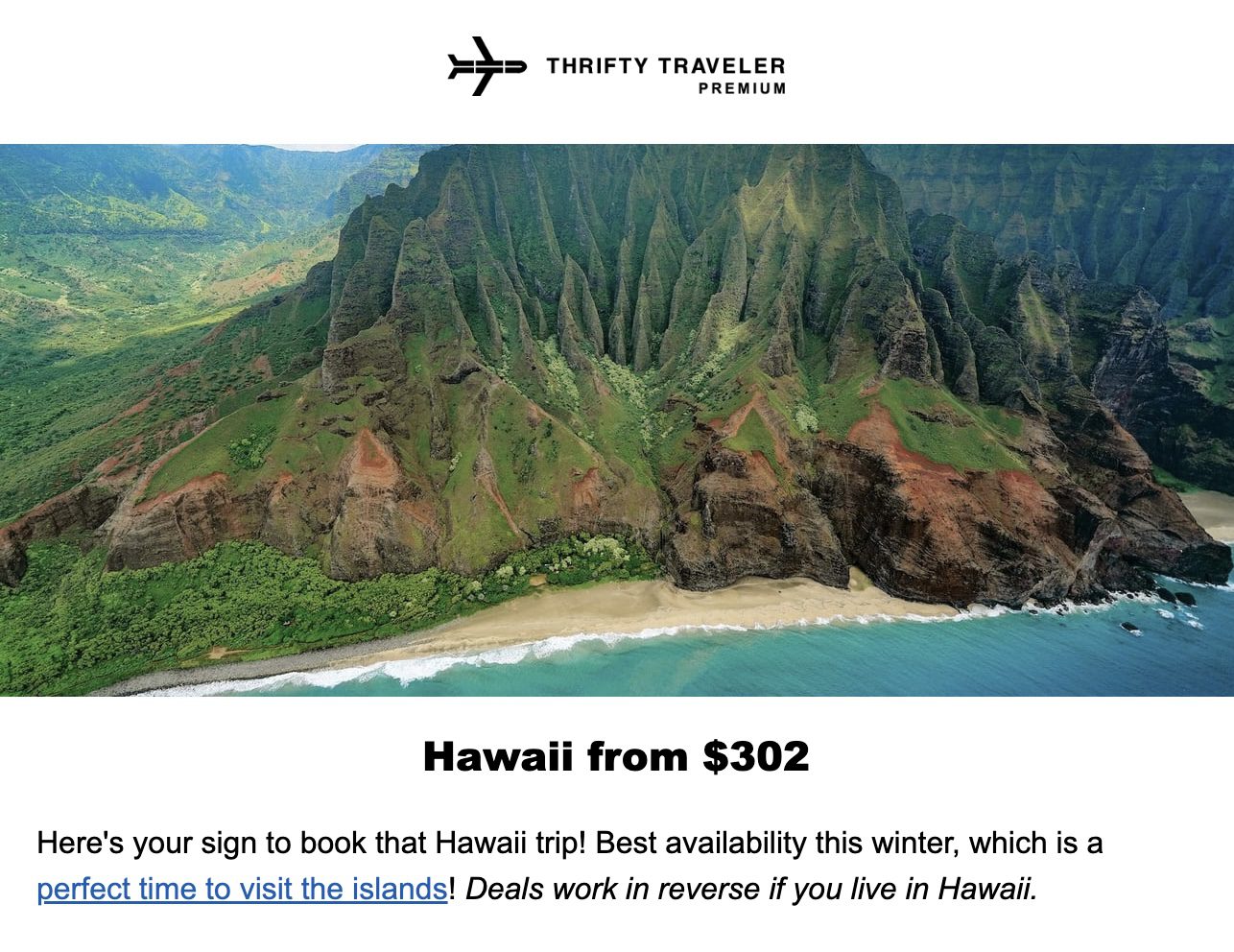 In good times and bad, sub-$500 airfares to Hawaii pop up occasionally throughout the year. This deal could get you to Hawaii from…

Finally, let's head back to the desert to a destination everyone's always trying to get to: Las Vegas. 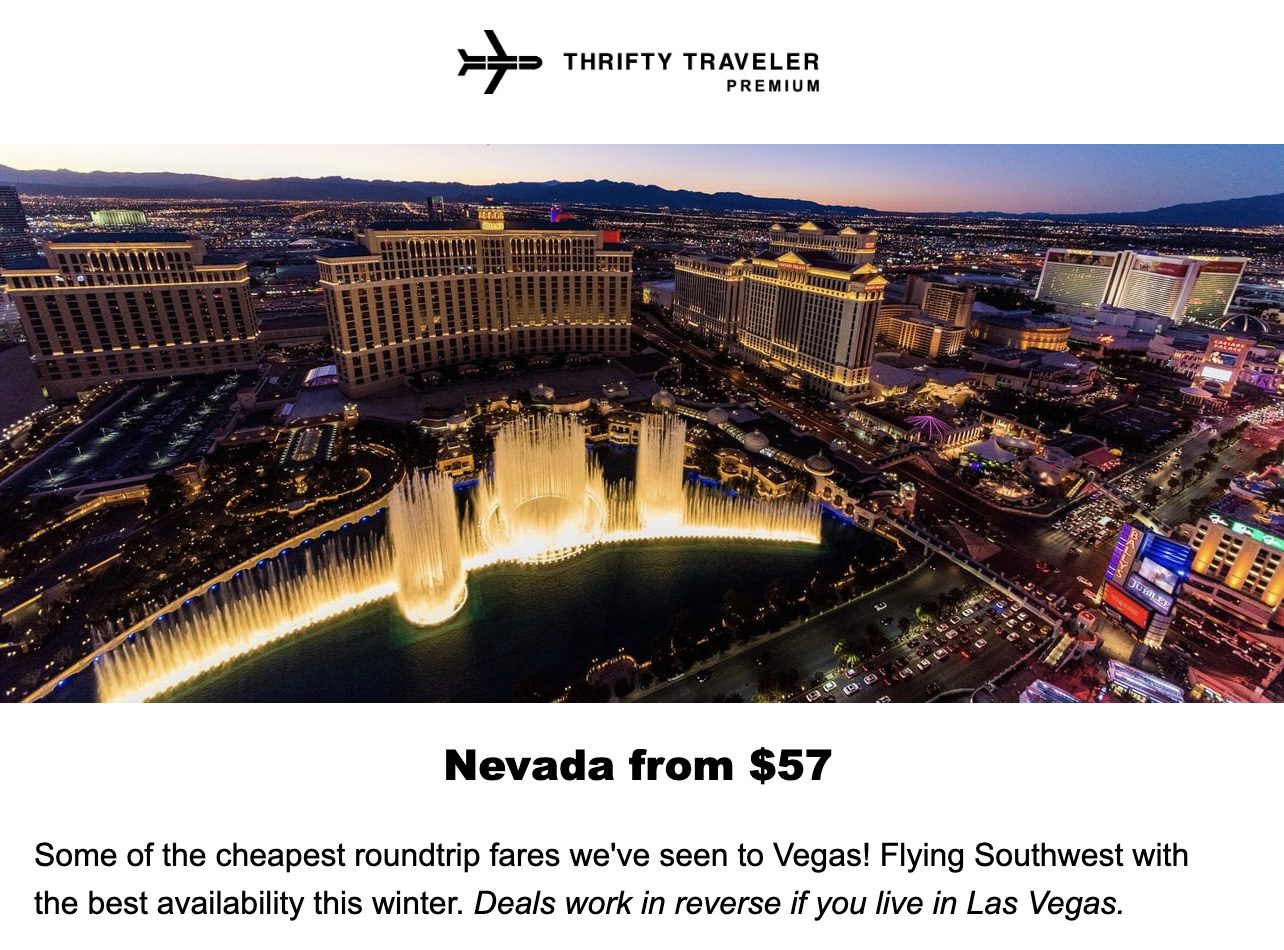 Sin City flights in the double digits are amazing, and can help you save money to spend on the strip instead!

Cheap Flights to Mexico & the Caribbean

Let's dive in to some fertile flight deal territory: Mexico and the Caribbean.

If you have written off some Caribbean or Mexican destinations as too expensive, please reconsider. We've found some incredibly low fares to some of these destinations this year – perhaps none more so than Cancún (CUN).

If the Pacific Ocean floats your boat more than the Gulf of Mexico, Puerto Vallarta (PVR) and Cabo (SJD) are phenomenal Mexican destinations, too. Earlier this year, we found flights to get there for less than $200 roundtrip through next winter!

These deals are gone now! Get them sent to your inbox and book the next one with Thrifty Traveler Premium!

Everyone loves a flight deal using cash, but we send Thrifty Traveler Premium members get award fare alerts to use their points and miles, too. If you want to save your cash and burn some miles instead, we send out multiple award fare deals every week. And they don't get much cheaper than this Delta SkyMiles flash sale to Cancún (CUN), with nonstop flights from Minneapolis-St. Paul (MSP) for just 11,000 SkyMiles … roundtrip! This was one of our favorite finds for 2023.

Sometimes, we find deals that can get you to many destinations for one low price. Just a few weeks ago, we found amazing fares into 2024 to typically expensive destinations like Antigua (ANU), St. Lucia (UVF), and Turks and Caicos (PLS) … for $380 or less, total. With Thanksgiving approaching and Christmas not far behind, domestic flight prices might seem higher than ever. Look abroad instead: fares to Europe later this year or next are dropping.

It's been a great year for cheap flights to Europe, and that hasn't changes as the year draws to a close. Here's a sample of what we've found so far, starting with one of the cheapest fares to Italy we've ever seen – flying nonstop, to boot.

That's a nonstop, roundtrip fare under $400 to get to Rome (FCO). Flights to Europe don't get much better than that.

Iceland is one of our favorite destinations throughout Europe – especially for 2023. We think it's one of the best bets for international travel right now due to low crowds and some incredible flight deals like this one for later this year. 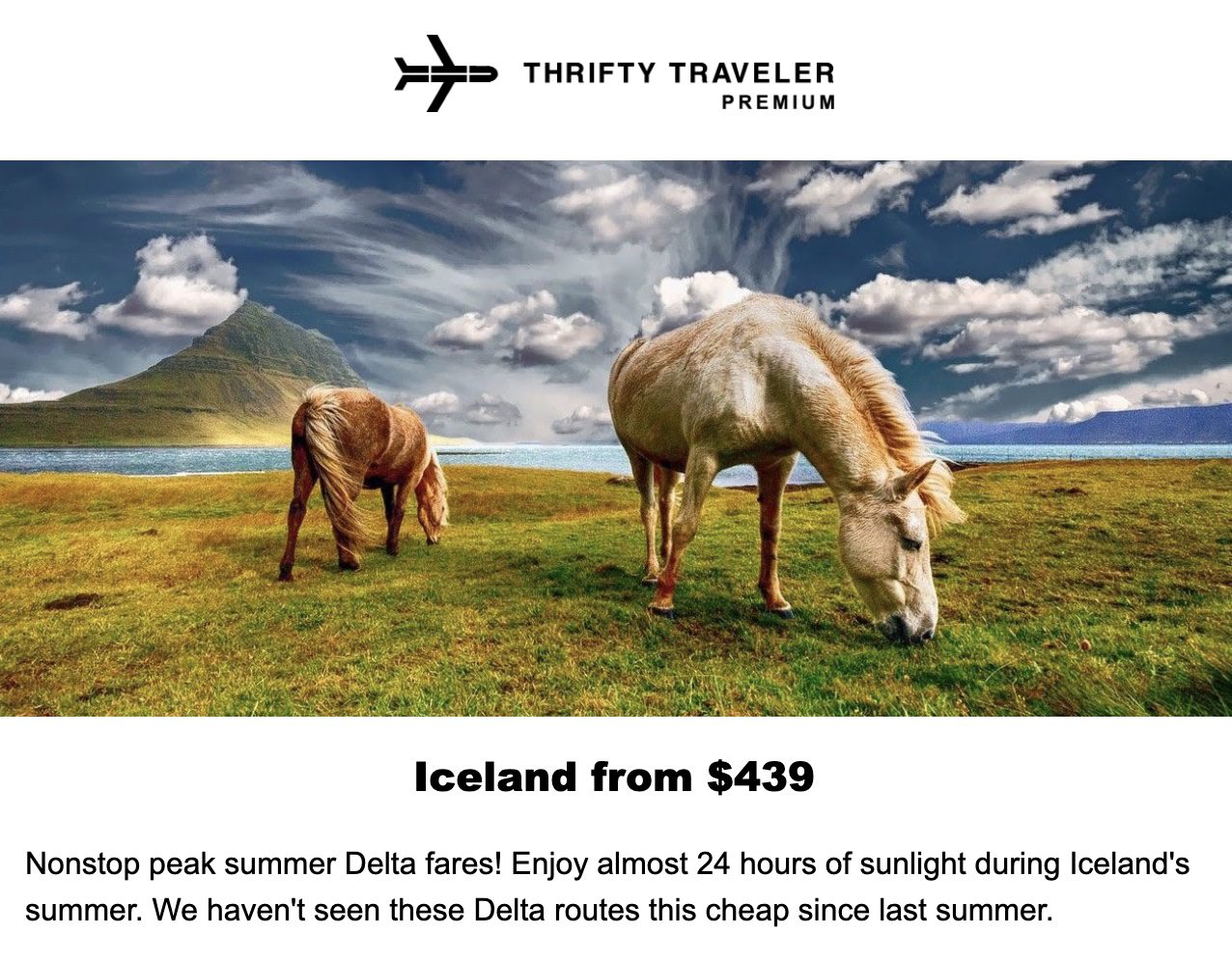 Another northern destination that more and more Americans have been targeting lately is Norway. Home to immense fjords and mile-after-mile of natural beauty, Norway is a perfect adventure trip in 2023. Plus, why not head to Norway when flights cost half of what many trips to Vegas or Los Angeles will run you?

You've either been to Paris or it's on your list. Just last week, we dug up hundreds of fares from all across the U.S. to Paris-Charles de Gaulle (CDG) … all in the $400s. 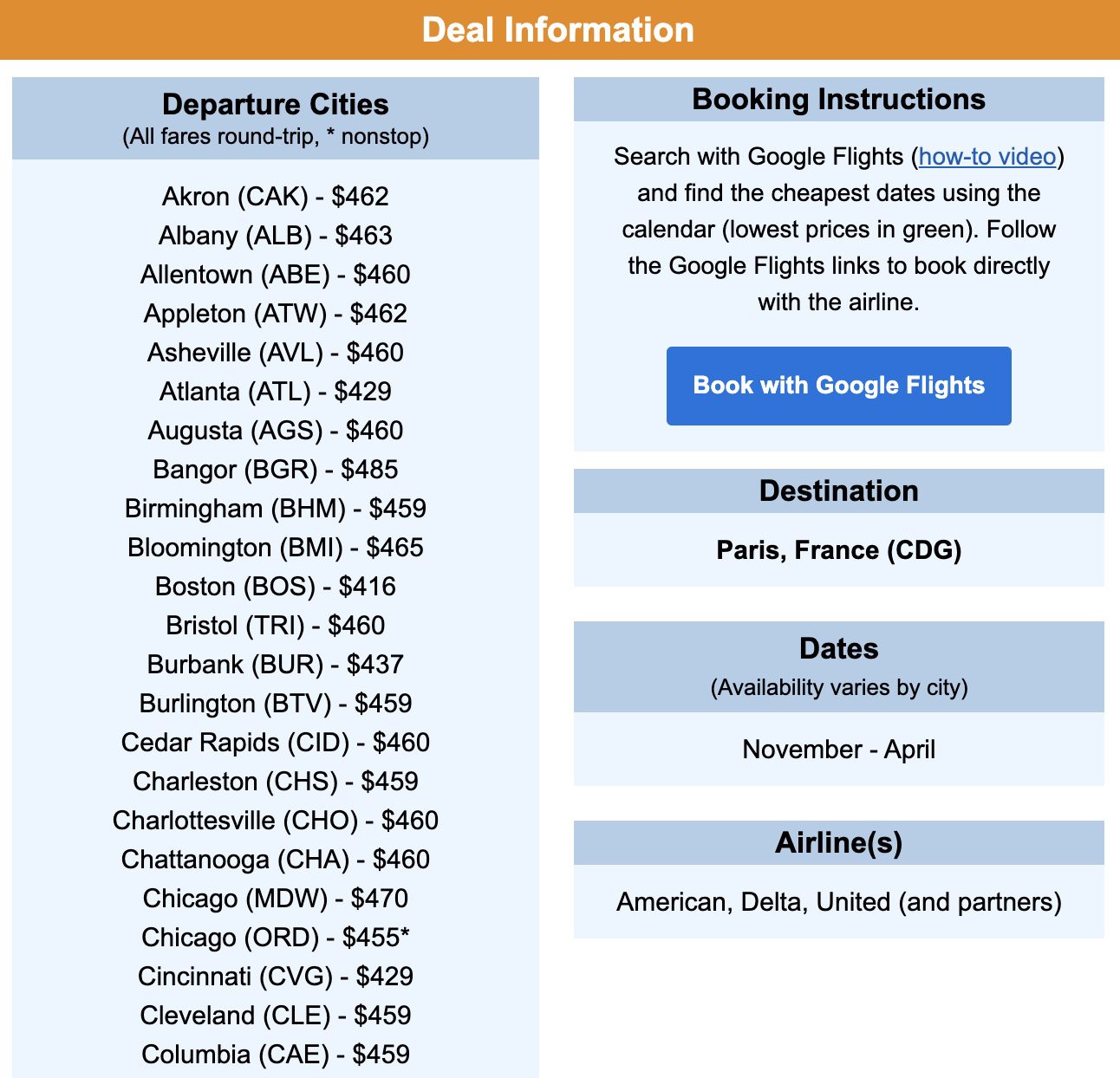 Let's not forget about Greece – and if you think that Greece is too far away or too expensive, you're wrong. We find incredible flight deals to Athens (ATH) all the time, including this one with tons of great fares from dozens of U.S. airports for less than $500 – and sometimes under $400!

Plus, the value we find to Europe isn't just for cash fares either. Have a few thousand SkyMiles? Hello, London! Or Barcelona (BCN) … or even Madrid (MAD). At just 32,000 SkyMiles, you could have booked a trip to Europe for fewer SkyMiles than most domestic trips. Best of all, these Delta SkyMiles award fares were fully refundable. That means you could lock in low rates, then cancel down the line if need be and get your miles back for free. Easy as that!

Premium economy is an incredibly comfortable way to get to Europe, with far larger seats than you get back in economy and better service and food, too. And those seats go on sale from time-to-time, too – we've sent Thrifty Traveler Premium members a half-dozen deeply discounted premium economy fares to Europe in 2023 alone! 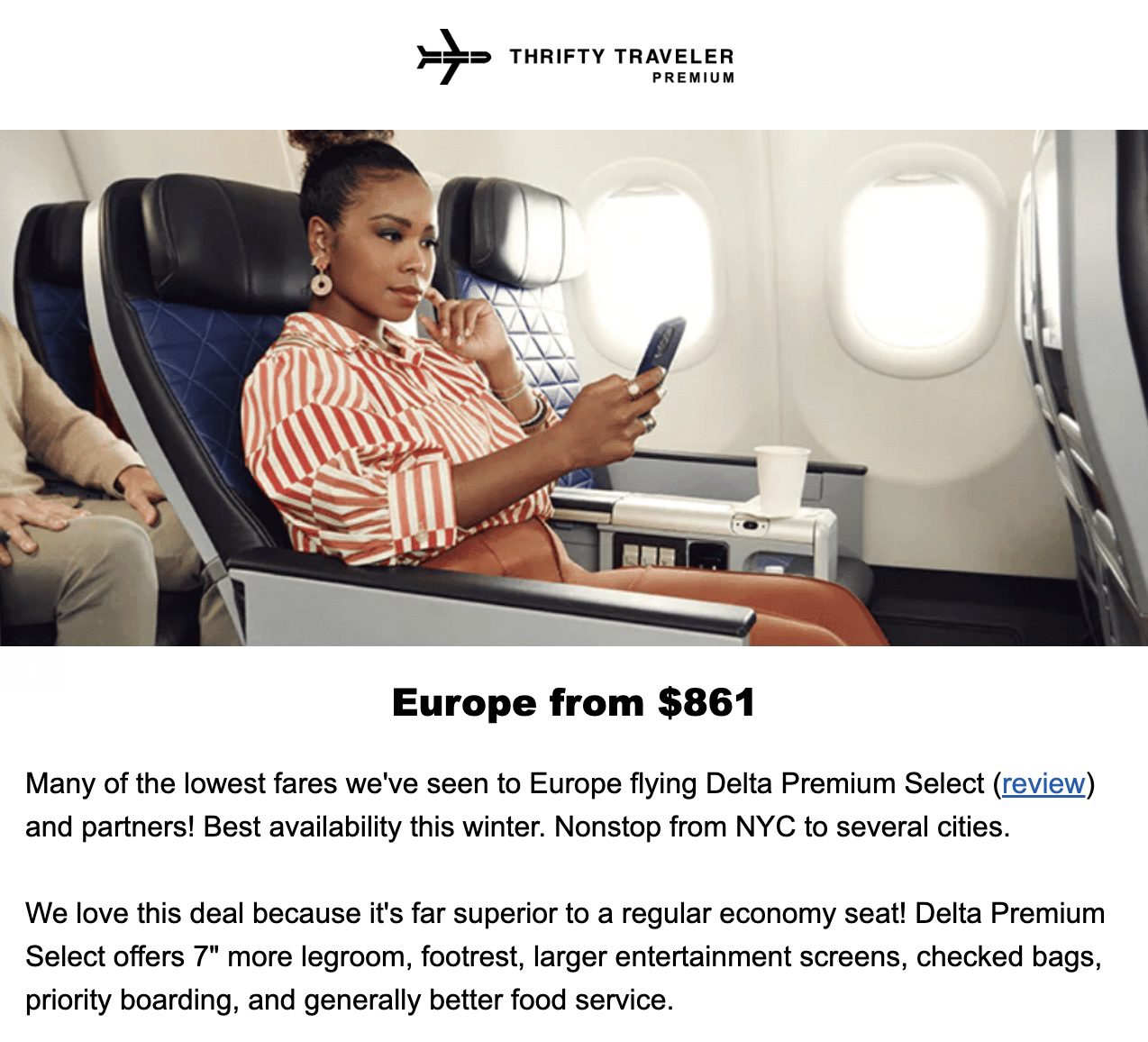 If you can think of a great world destination, I'd bet we've found a flight deal there over the last year. Sometimes, there's no rhyme or reason to when these deals sprout up … but we always find them when they do!

Head into South America and you find Machu Picchu. A staple on so many bucket lists, flight deals to Peru are not always easy to find, but we found these fantastic fares to Lima (LIM) in Peru starting at just $221 roundtrip! 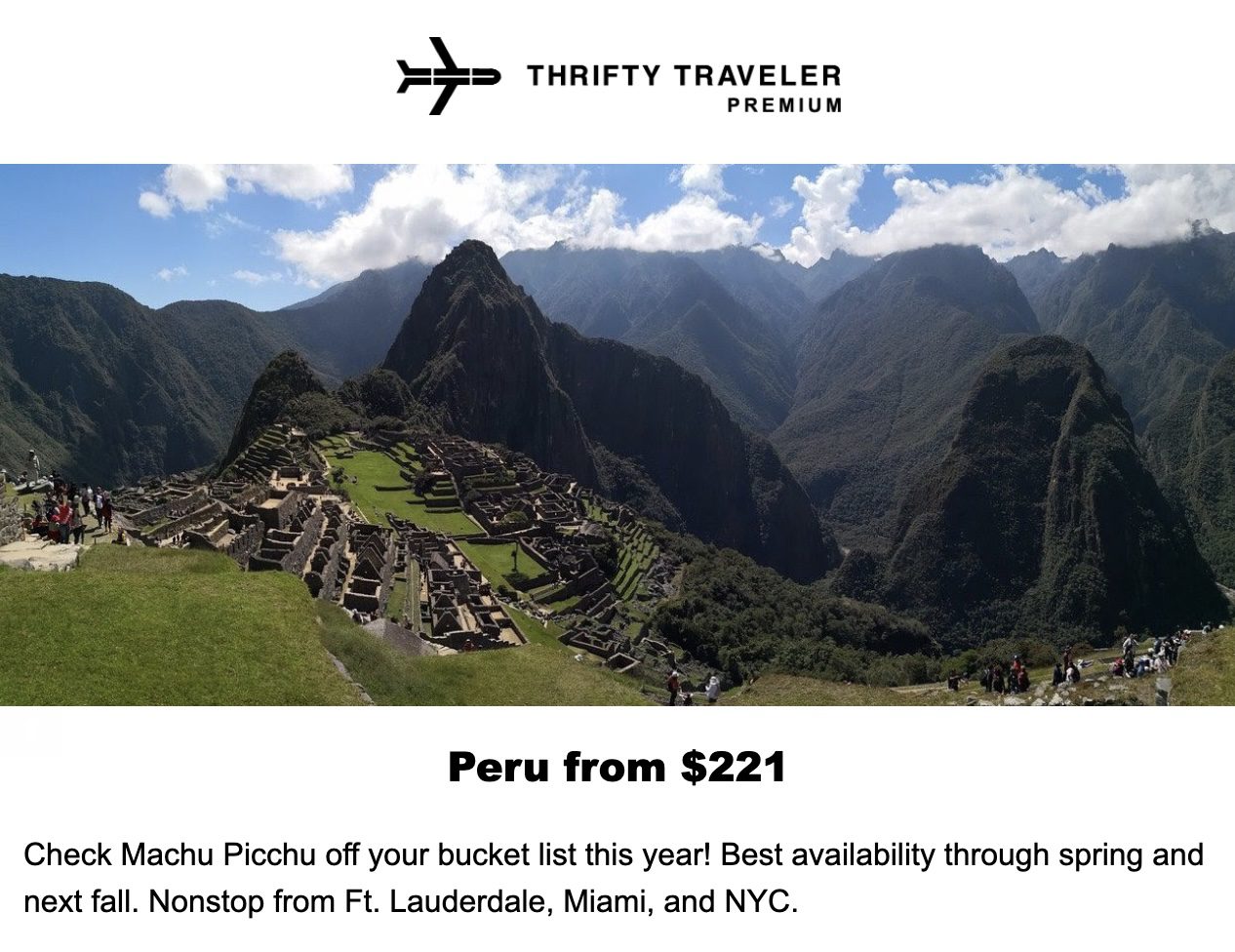 Machu Picchu is a site unlike any other. But we've found plenty of flight deals to another adventurous destination, especially for those who love scuba diving: Belize.

The scuba hot spot has one of the world's longest reefs for the diehards, but is also a perfect, beach-y, laid-back vacation spot for travelers looking to move at a slower speed, too.

Japan was closed for more than two years to U.S. travelers. It was a devastating blow to bucket lists everywhere. But Japan is back for 2023 travel, and so are cheap flights to get you there. 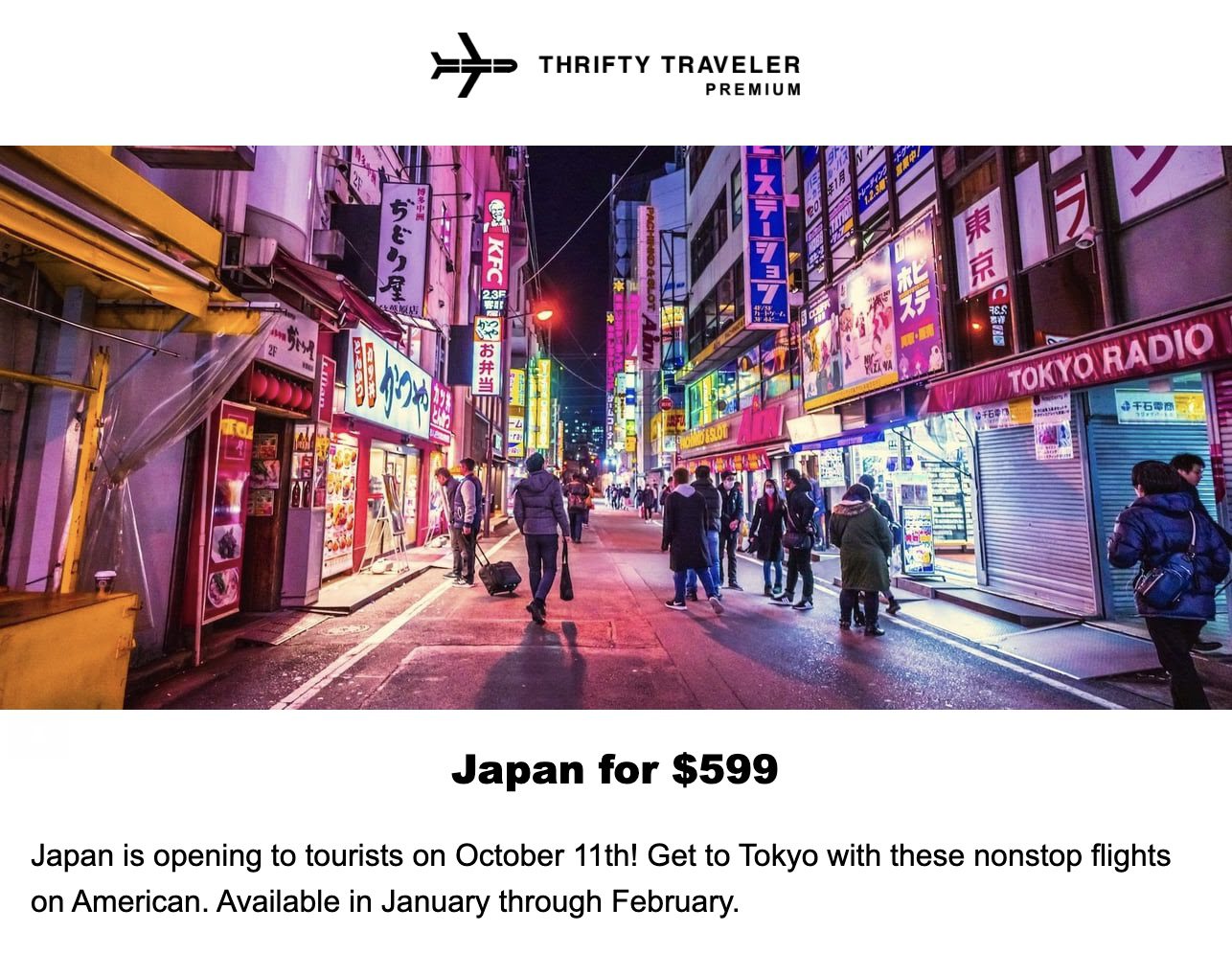 If Morocco is on your mind, we dug up this fantastic deal flying United and its international partners to get you to the classic African city of Casablanca (CMN) for under $500!

Farther south on the African continent is the destination of some of the craziest flight deals we've found all year – including for a trip next year. We keep finding fares to South Africa at record-low prices of less than $600 for a trip in into 2024. 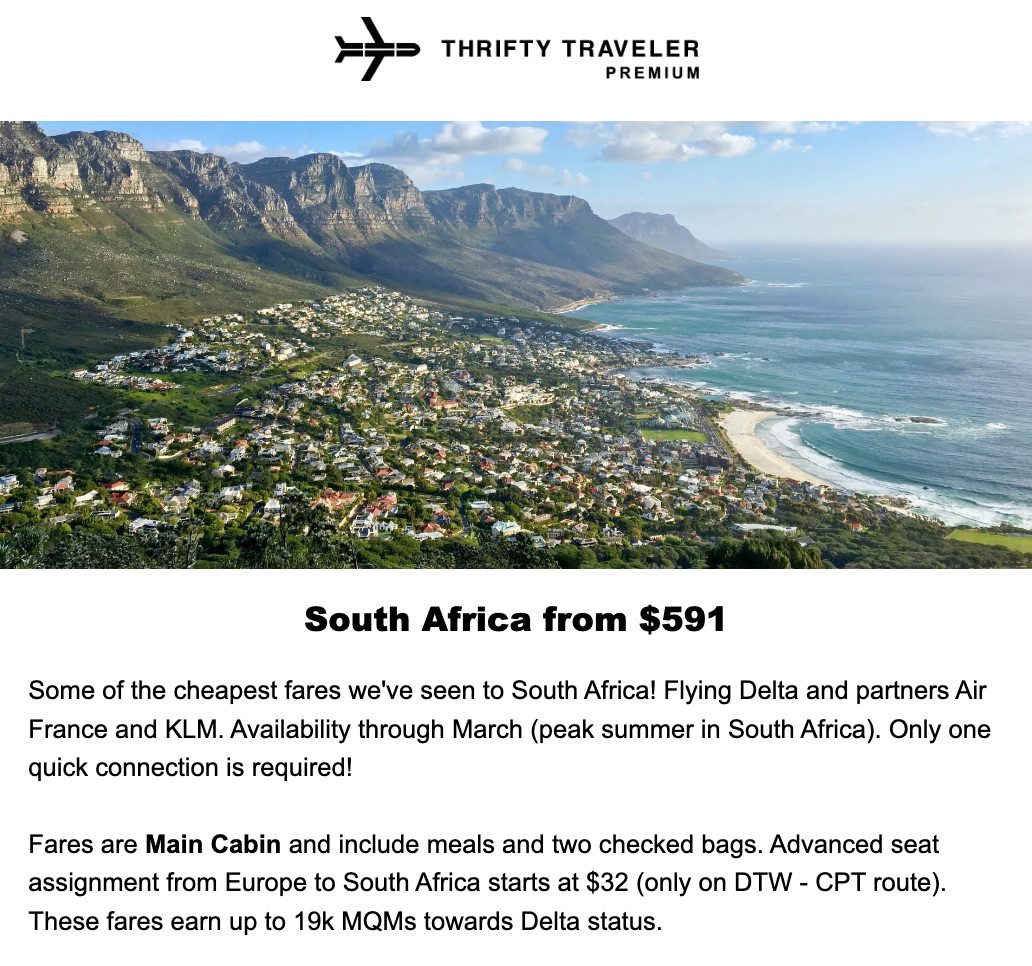 Here's one for all of you honeymooners out there: The Maldives.

These flights were part of a flight deal we sent to our subscribers highlighting some sub-$800 fares to the hugely popular, remote, and romantic islands. Also, these flights aren't just on any carrier: They're on Qatar Airways, the best airline in the world.

With a Thrifty Traveler Premium+ membership, your bucket list doesn't stand a chance.

Business Class Deals with Points, Too

Whether you're looking to splurge and pay cash for a lie-flat seat or have plenty of points and miles to burn, we've got you covered if flying business class is your goal.

Flying business class is a big win for the long trip to Japan. We helped Thrifty Traveler Premium+ members do just that, locking in a trip for later this year or early next flying United Polaris business class from just 85,000 miles … roundtrip! 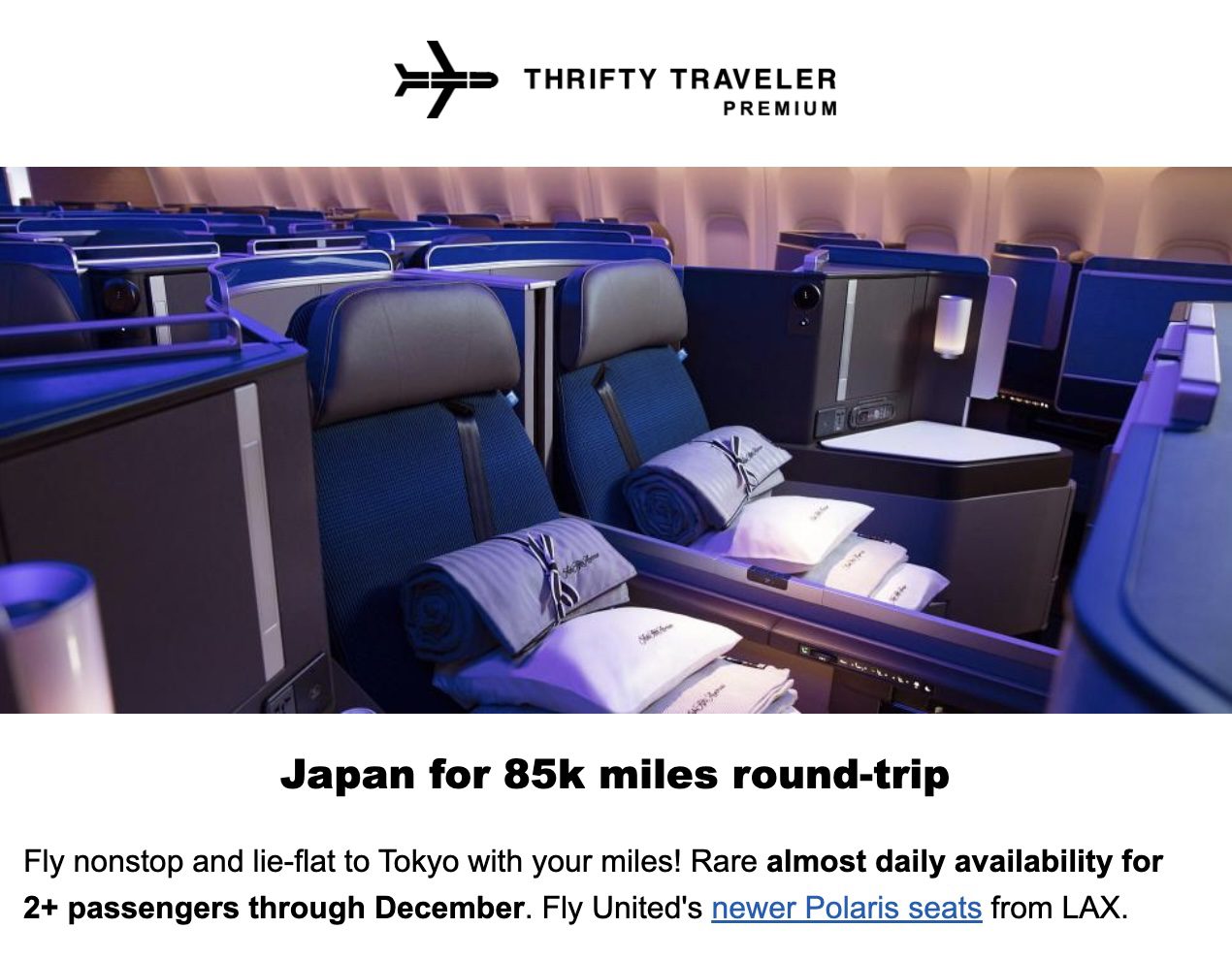 Getting all the way to Australia and back in business class is one of the hardest award redemptions to pull off: Finding the award space is a tall task. But we alerted Thrifty Traveler Premium members earlier this year for a chance to fly Qantas business class to Sydney (SYD) or Melbourne (MEL). Best of all, you could book for just 55,000 miles each way … for a trip later this year or into early 2023! This deal is long gone – get the next award alert to fly business class with your miles with Thrifty Traveler Premium+!

Business class flights to Europe are coming at some insane values using your cash, too! How about Singapore Airlines' nonstop route from New York City (JFK) to Frankfurt (FRA)? It's one of the world's best business class products, so there's no way you're paying less than $5,000, right? Right? Wrong… 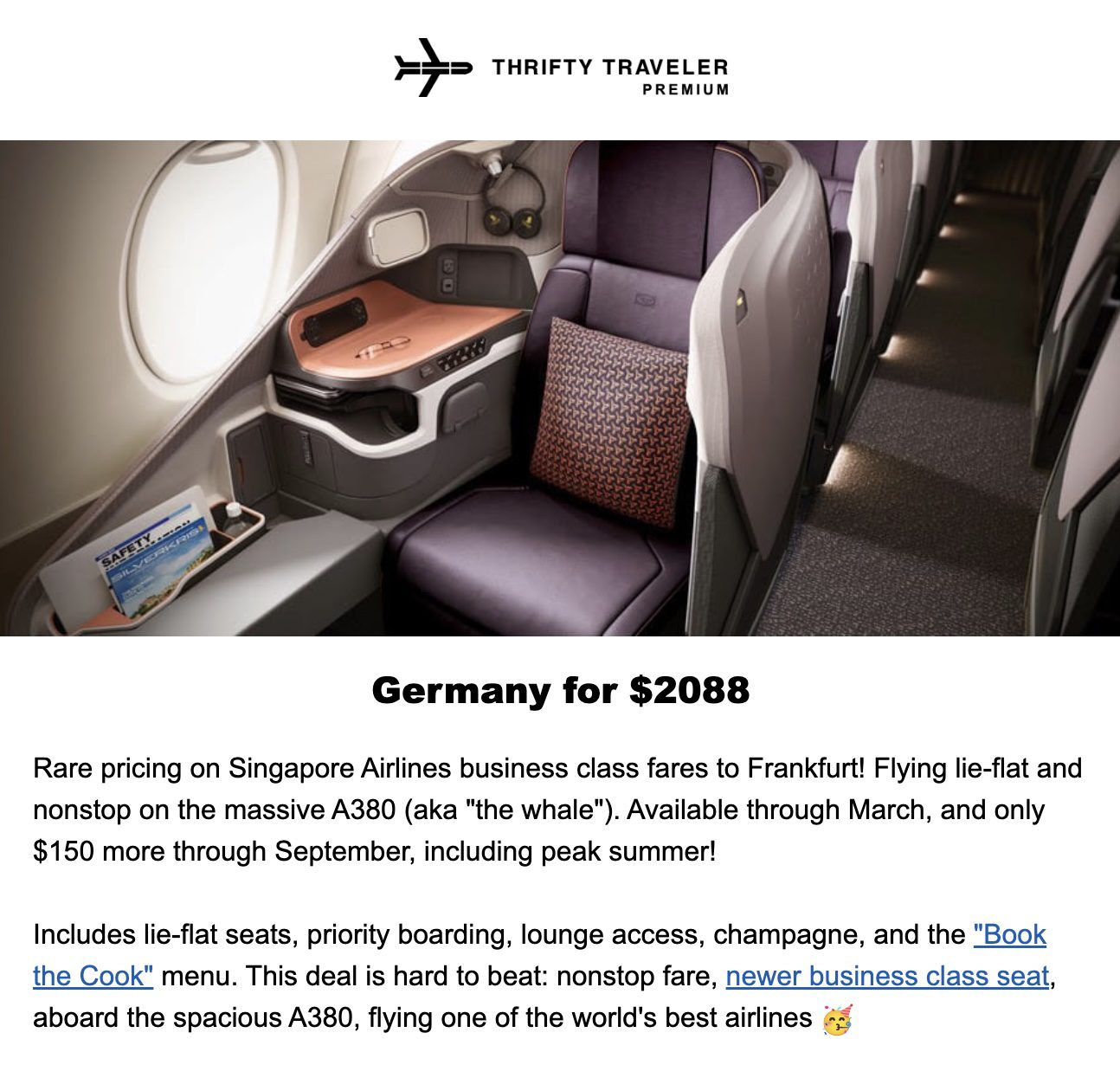 Flying the A380? New, updated seats? Champagne? Say no more.

A big, roomy seat to Germany is amazing, but SWISS would like to have a word about its own business class seats flying to Geneva and Zurich. Whether you're heading for Switzerland to hit the slopes this winter or to explore in the summer, our award alerts could have gotten you there. 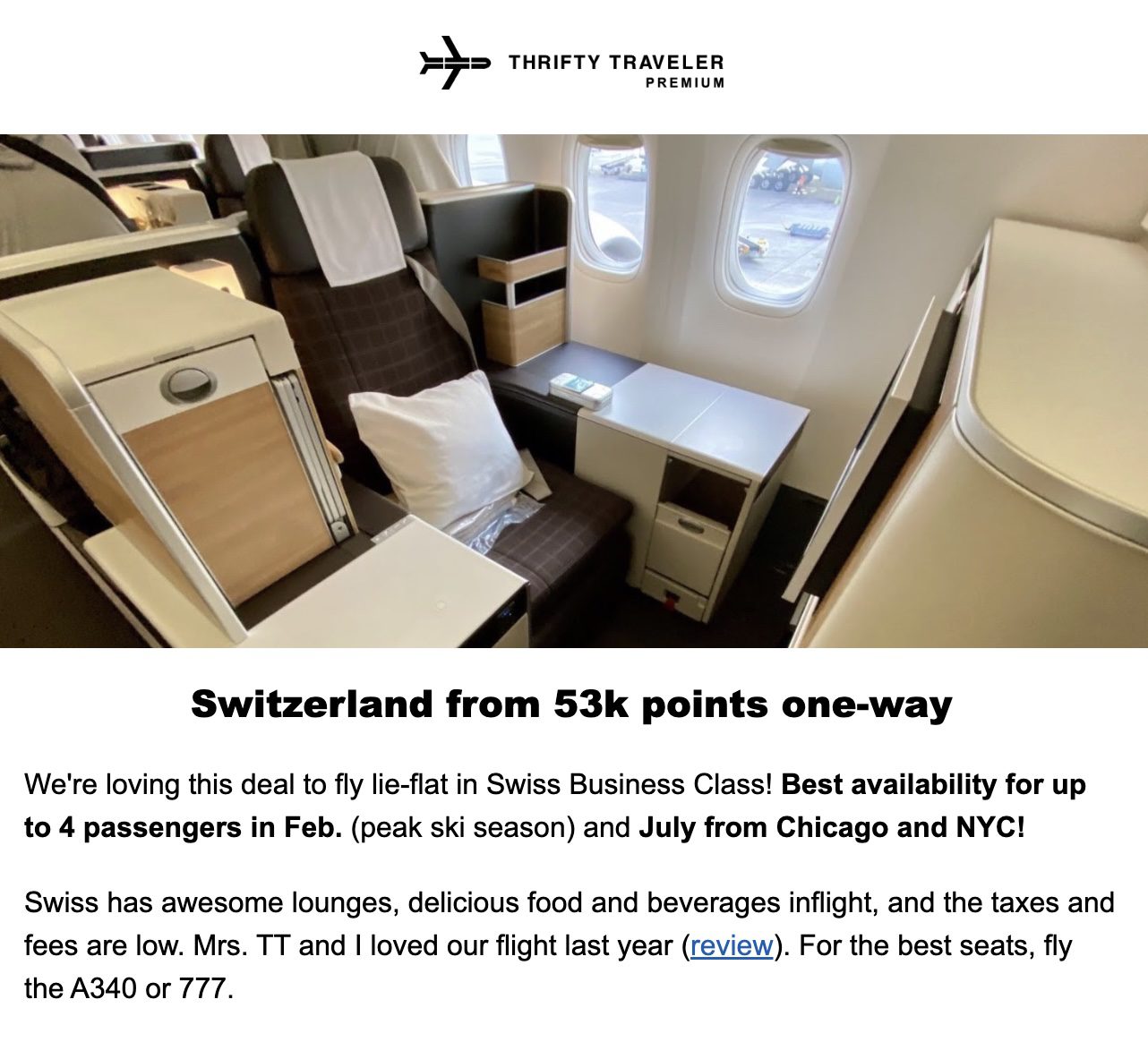 But we saved the best for last: Qatar Airways QSuites. Yes, you can even find incredible flight deals on the best business class in the world. 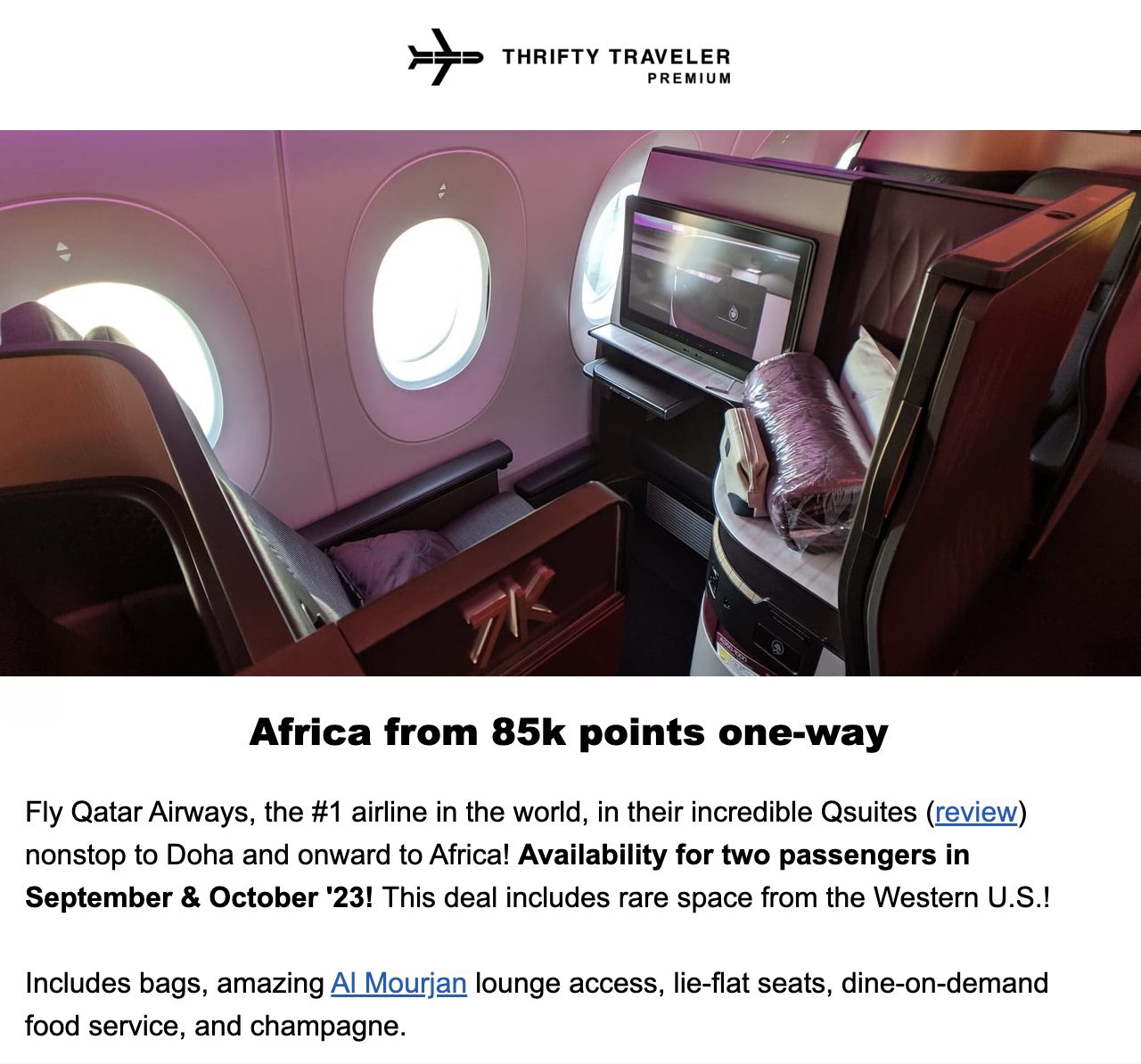 All these seats got booked up fast! Get the next cheap flight (or award alert) with Thrifty Traveler Premium+ – sign up before prices go up!

Interested in joining Premium? Now's the time.Here's how Premium+ works:

Here's what one of our flight deal alerts looks like: 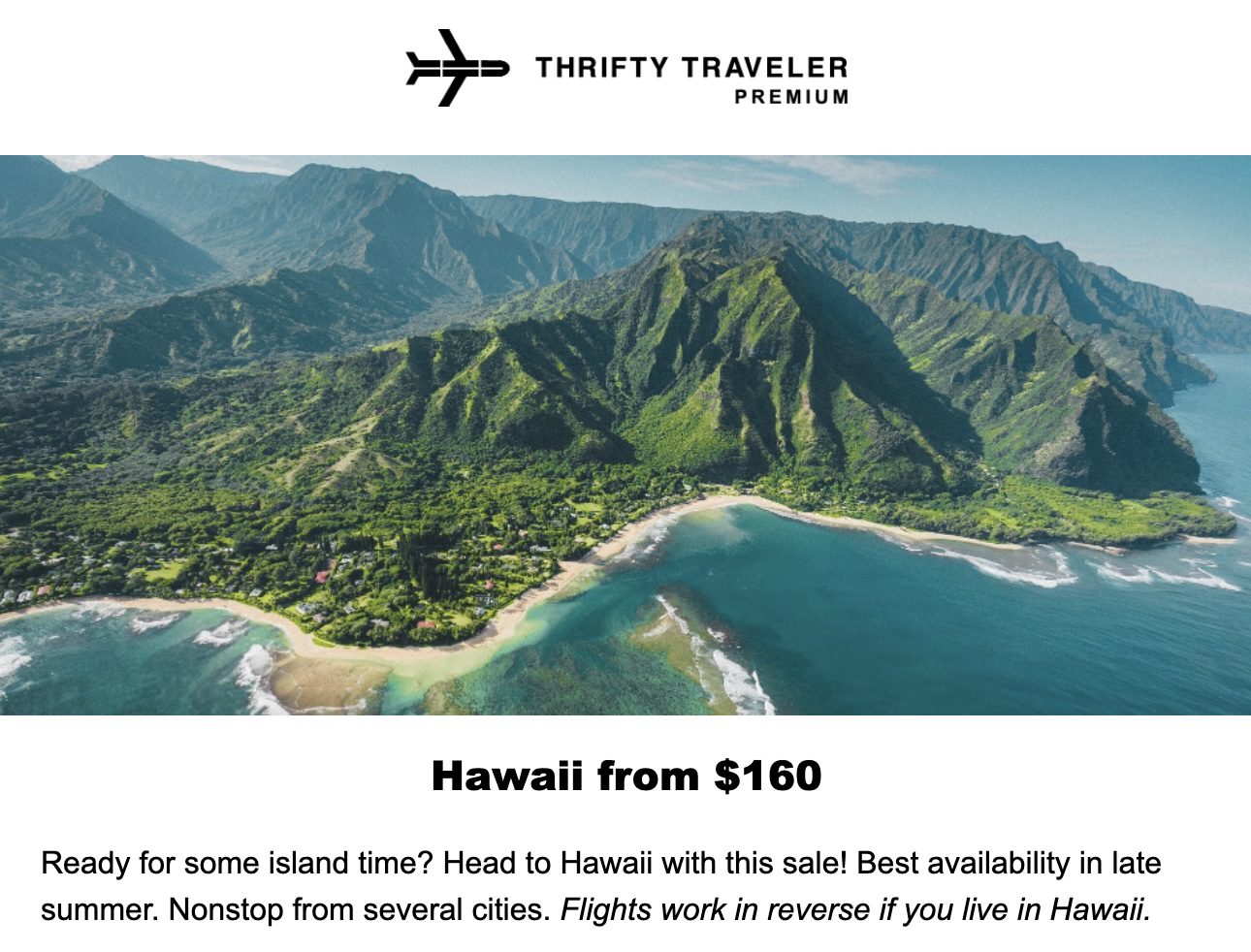 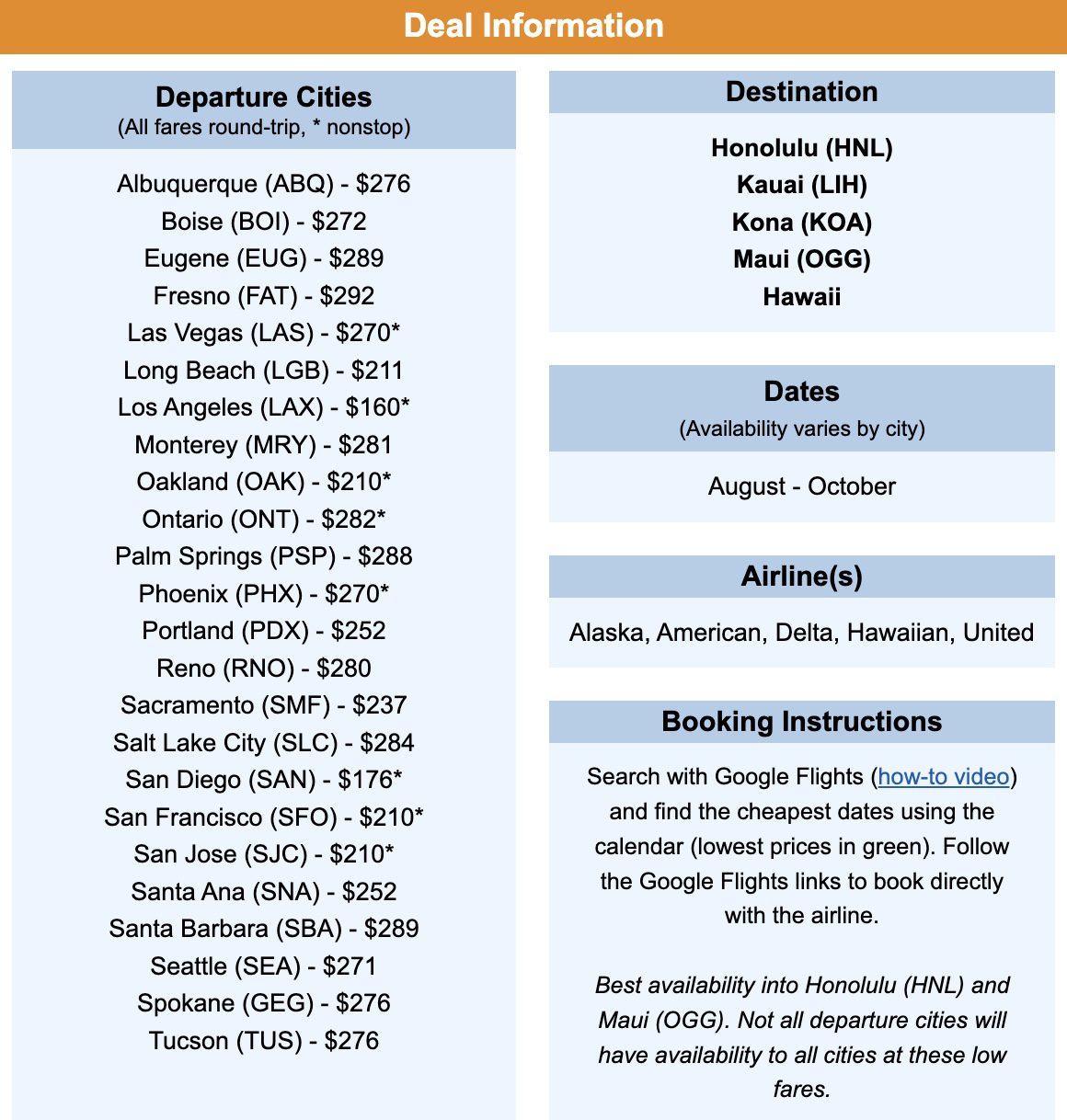 We're not a travel agency, so you get to skip the middle man and book the flights you want yourself! We include booking instructions on each Premium deal so you can find your way to the low fare quickly and easily.

Whether it's an $87 flight to Phoenix, a nonstop flight to Europe for less than $350, or a low fare alert on lie-flat business class seats to a bucket list destination, Thrifty Traveler Premium+ members can get it all – including all the deals you see here, and more.

The world is waiting for you, flight prices are dropping, and great deals to use your points are out there. We're ready to help you get back out there again … with some of the best flight deals you can find.